On the last DC Friday, I had a look at Batgirl and Supergirl from Mattel’s DC Super Hero Girls line of 6-inch action figures. Today, I’m finishing things off with Harley and Ivy. Yes, interestingly enough Mattel and DC rolled the villains into the fold as heroes in this line. And for some reason I get a perverse pleasure out of a character like Harley Quinn, who herself is the epitome of perverse pleasures, appearing in a toy line aimed at delivering positive messages to little girls. Yeah, wrap your noodle around that one, eh? 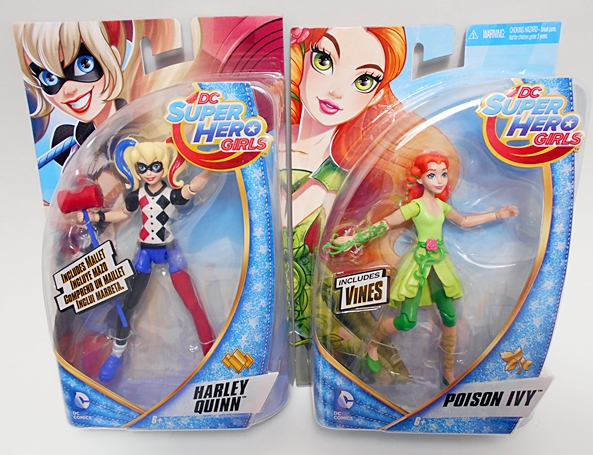 I’ve got nothing new to say about the packaging. It’s colorful, it’s attractive, you get personalized character art on each card. It’s worth noting that Harley is the only figure that doesn’t get a bio on the back, because what are they going to say? She’s a psychotic murderer? The “accessories” that are called out on the bubble continue to be a little dubious. Sure, Harley’s got a hammer, but Ivy’s accessories are her vines? M’kay. The packages are not collector friendly, but lets not hold that against them, because these are in no way figures aimed at collectors. Shall we start with Ivy?

Of all the Super Hero Girls, Ivy looks the most normal. She’s got a green dress, green knee-length pants, and green shoes. Her plant fetish is evidneced by green ivy painted on her lower legs as well as a vines making up her belt, adorned with a single rose. She also has a sculpted vine in her hair forming a braid. Articulation includes rotating hinges in the shoulders, elbows, hips, and knees, a ball joint in the neck, and swivels in the wrists and ankles. My biggest issue here is that her lower legs came out of the package a little warped. That’s been a minor issue with all the figures because of the way they’re posed in the tray, but it’s been especially bad with Ivy here and Wonder Woman.

The head sculpt is pretty cute with orange hair and the typical large eyes that gives her that slightly familiar Disney Princess look, hopefully without stepping on any copyrights, BECAUSE WE ALL KNOW THE ONLY COMIC BOOK DISNEY PRINCESSES NOW COME FROM MARVEL!!! While the overall design of the figure makes sense for Ivy, I’m not sure I would recognize her if I didn’t know she was supposed to be a DC character. That having been said, I still dig her well enough. 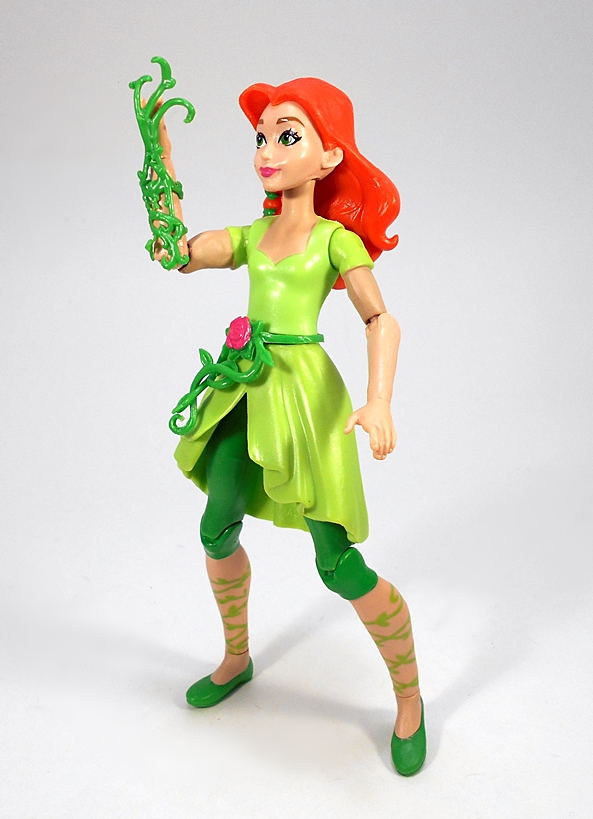 Lastly, Ivy comes with her “accessory,” which is just a sculpted vine that clip onto her wrist. Jeez, Mattel, you could have at least given us two of these, no? Moving on to Harley…

Well, there’s no mistaking who this is supposed to be! While much of Harley’s harlequin outfit has been converted into what looks like a prep school uniform, there’s still plenty of Harley here. She has black and gold diamonds running down the front of her buttoned own shirt, blue shorts and sneakers, and red and black leggings. They even kept her adorable little spiked bracelet. Articulation is identical to Ivy’s, but without the skirt, Harley has much better range of motion in her hips. 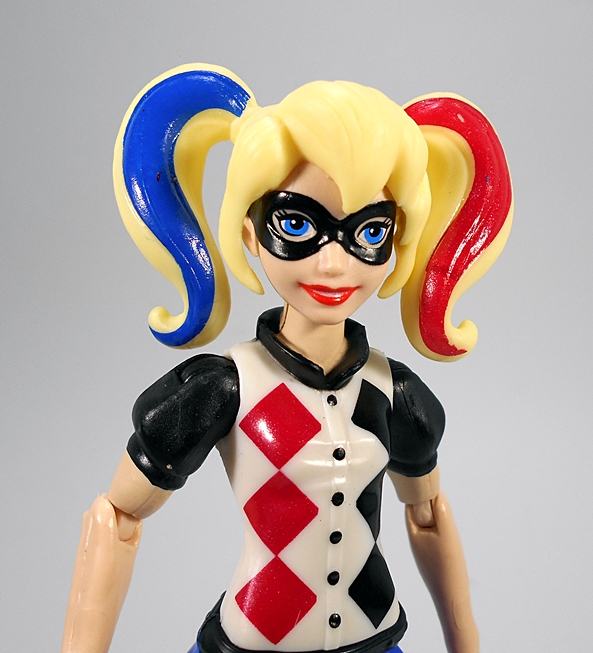 The head features a sculpted and painted black mask and very pale blonde hair with red and blue stripes in her pigtails. This is definitely my favorite of all the SHG’s new looks. 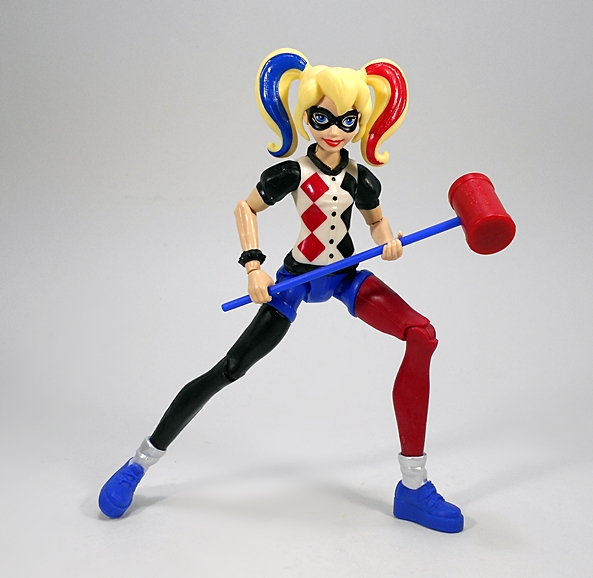 Harley also features the better accessory, her mallet. indeed, I’d argue that next to Wonder Woman’s lasso, Harley’s mallet is the only thing in this wave of figures that could really be considered an accessory. 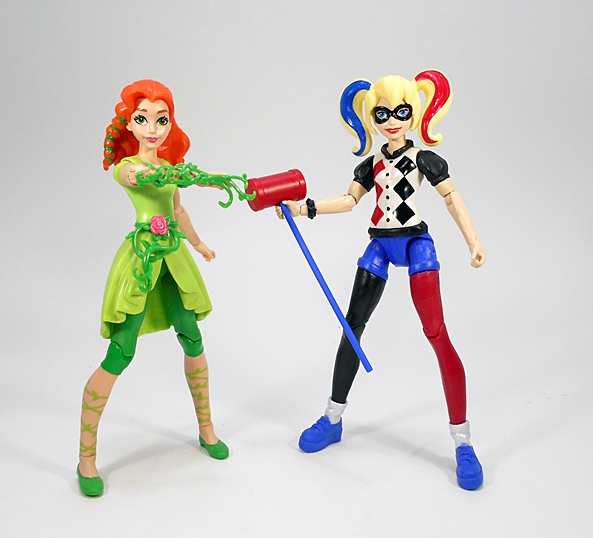 Once again, I’ll point out that the best thing about this line is that they sneak in with a retail price at just under ten dollars and thanks to holiday sales, I grabbed most of mine for even less than that. I’ve noticed that some vehicles and playsets are appearing on the shelves, but I think I’ve gotten all I can out of this girls. It was a fun ride and these gals will no doubt occupy the corner of some shelf as curiosities. Although, I won’t rule out the possibility of checking out a couple of the 12-inch dolls at some point down the line, especially if they happen to hit clearance.

And I’m calling it a week folks! Sadly, there will be no Anime Saturday tomorrow, as I’ve got a busy working weekend ahead of me and I’m not sure how much I’ll be home. I’ll catch y’all on Monday when I’ll be kicking off an all new wave of Marvel Legends!