I just got back from seeing Rogue One and I really wanted to talk about it. But FFZ is a toy blog and not a movie blog, so I needed a thinly veiled excuse to discuss it. One quick trip to Target on the way home netted me exactly what I was looking for. The Titanium Series Imperial Cargo Shuttle, so let’s talk about this cool little ship and not in any way use this Feature as a means to interject some random thoughts about the movie!

The ship comes in a little window box that closely matches the packaging used for the Star Wars Black 6-inch series and includes some schematic-style line drawings of the ship. The side panel also denotes that this is #31 in the series…. holy crap, there have been 31 of these ships released??? The packaging is collector friendly and fairly attractive, although mine looks like it was beat to hell in the stockroom or kicked around the floor by kids. Honestly, I think going with a window box for these feels a little pretentious on Hasbro’s parts and I prefer the cards and bubbles that Mattel uses for their Hot Wheels ships.

So, how about that Rogue One, eh? I had mixed expectations going in. On the one hand the trailers have gotten me pumped more and more with each new glimpse. On the other hand, I’ve read some tempered reactions to it. Some people were saying it was too dry and didn’t feel like Star Wars. Now, I will freely admit that it lacked a little of the heart and soul of The Force Awakens, but I didn’t find it dry at all, and indeed I felt it to be extremely Star Wars-y. In fact, I thought it felt more like Star Wars to me than anything we’ve had since The Original Trilogy. I loved The Force Awakens, but in tone that movie felt more like Return of the Jedi. It tackled some heavy themes, had some dire scenes, but it was also rather jokey and lighthearted at times. But that was appropriate, since it was a sequel to ROTJ.

Rogue One felt more like A New Hope to me, which is good seeing as how it leads directly up to that film. It had that grittier feel and everything from the sets and the ships and the tech all looked seamless to me. It delivered some amazing battles between the Rebellion and the Empire, which, Battle of Hoth not withstanding, is something that I’ve always wanted to see more of in a series called Star Wars. It was great to see the Imperial Forces in action and there was a lovely variety to the engagements. It also felt pretty damn epic, spanning a lot more locations than I had expected. What’s that? Oh, right… the toy review! 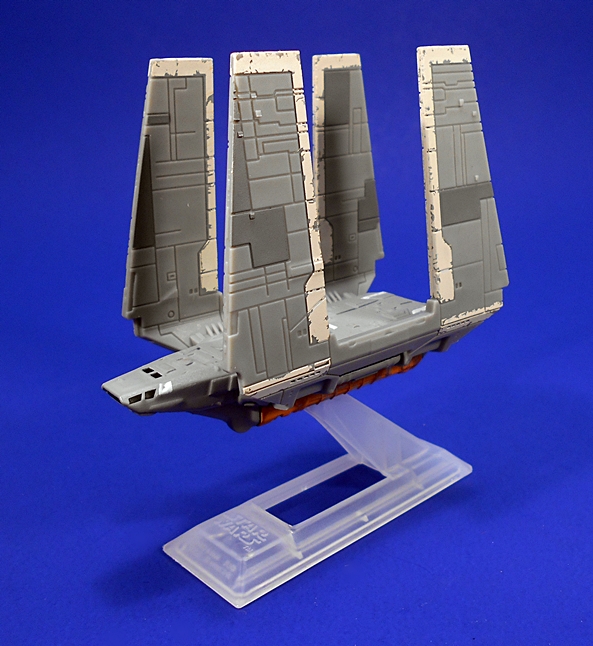 Imperial Cargo Shuttle SW-0608 is arguably one of the most important ships in the Star Wars universe, as it’s used to ferry the team of Rebel commandos to steal the plans for the infamous Death Star. It’s got some similarities to the Imperial Lambda Class Shuttle design, with the hull elongated, the main dorsal fin removed, and an extra set of articulated wings.

One of the coolest things about Rogue One was that it answers that age old gripe about why the hell the Death Star would have such a stupid design flaw. Alas, I can’t talk about that any more without going into spoiler territory. As much as I was anticipating this movie, I thought the story itself would be the least interesting thing about it, but there were some genuinely cool little twists and turns that kept me interested, even though I had an idea in my head about how it would play out and naturally what the outcome would be. Whoops… back to the review… 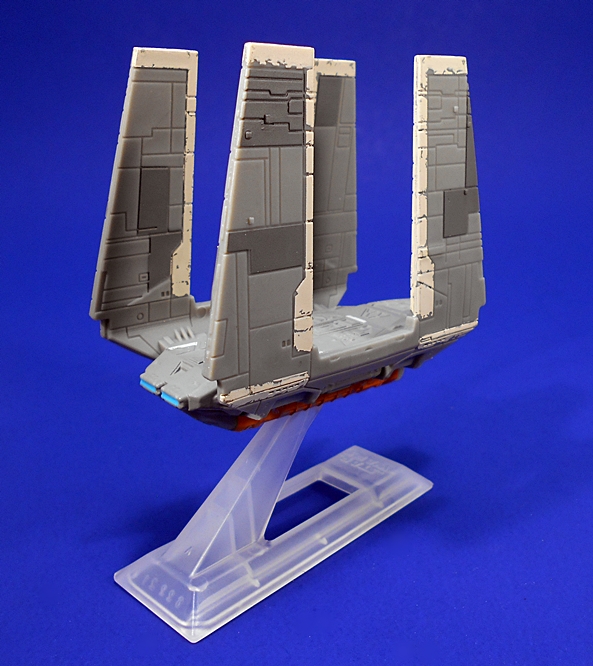 As some of you may know, I’ve been going with Mattel’s Hot Wheels line for my tiny Star Wars ships, so this is my first foray into Hasbro’s Titaniums, or at least since the line came back. At heart this feels a lot like the Hot Wheels line. The hull is made of die-cast metal and the wings are plastic. There’s a decent amount of detail to the sculpt, mostly in the form of panel lines. You get some different shades of gray to the paneling and there’s a little weathering as well.

I’ve read a couple reviews that accused the Rogue One of not having memorable characters. I’d take issue with that. None of these characters had the same instant appeal to me as Rey, Finn or my man-crush Poe, but I did find that the movie did a fine job of fleshing out a fair number of them. I really liked Director Krennic. He was a lot more developed than I expected him to be. I thought Jyn and her father were well done also. On the flip side, I would have liked to know a little more about Cassian Andor. I liked him a lot, but I felt they could have explored his backstory a bit more. Let’s check back in on the review… 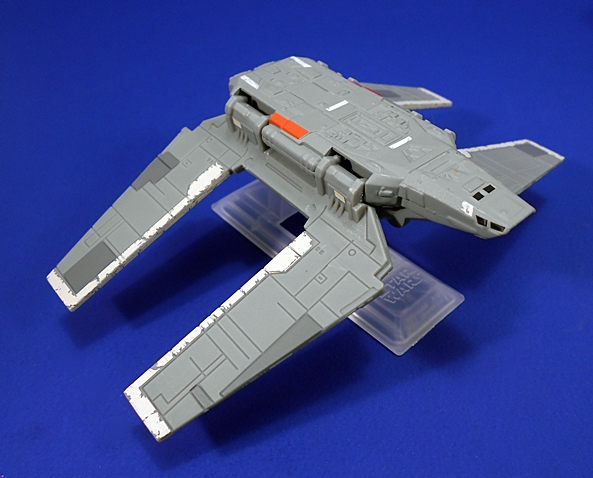 The wings on the shuttle are articulated. I’ve come to expect that from the Hot Wheels line as well, but here, Hasbro goes that little extra inch and gives the ship a couple more bells and whistles. You get an opening boarding ramp under the cockpit and four teeny tiny sets of landing gear. I actually had to dig each one out with a razor blade because they’re so damn tiny. Impressive!

Some of the more deliberate call backs to the other movies felt forced. The person Jyn bumped into on Jedha was potentially cringe-worthy, but in the end, I found them to be fun and didn’t mind them. In fact, the only thing that put me off a little was how different Vader sounded. That really took me out of those scenes. I appreciate that Jones is a lot older now, but I’m pretty sure I’ve heard him portrayed by other actors in games where he sounded more like Vader than he did here. Considering some of the digital lengths they went to bring back other characters, it seems like they could have cleaned up Vader’s voice a bit and had it sound more like it used to.

Very minor gripes aside, I came out of Rogue One pretty pumped to see it again. I thought it was a great and unexpectedly epic piece of work. It was definitely a different direction from the regular Saga, but at the same time it felt like pure, distilled and concentrated Star Wars to me and I loved it for that. Where The Force Awakens felt very small and compact, this one was a far more expansive trip through the Star Wars Universe. I can see myself going back a few times before it leaves the theaters and this is one movie that I already can’t wait to own on Blu-Ray.

As for my little Imperial Shuttle… It may not be the most exciting ship design around. In fact, it really does feel like a computer model that was kit-bashed for an Expanded Universe video game. But, after seeing the movie, I found that I really wanted a representation of this intrepid little ship in my collection and this seemed to be the only way to go. I’m somewhat impressed with my first Titanium purchase and I might even pick up a few more of these to compare them with my growing Hot Wheels fleet. At the very least, I’m happy to see that the two lines go fairly well together.