Yup, I’m still working my way through the Doctor Strange wave of Marvel Legends, and at this rate I’m at least on course to get through it all before the film hits home release. Oh, and if you haven’t seen the film yet, I’ll toss out a spoiler warning here now. But, c’mon… it’s been out long enough! 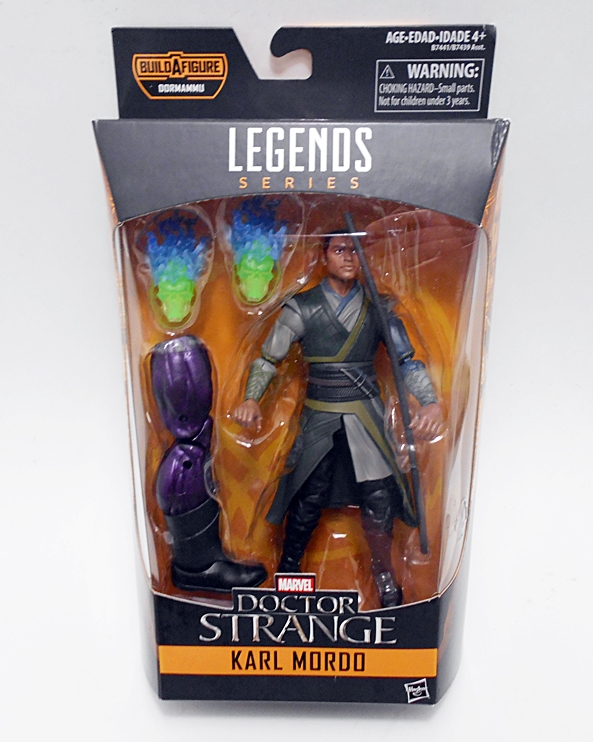 I have mixed feelings about the way the MCU treated Mordo in Doctor Strange. On the one hand, I was expecting him to be revealed as the villain to be a turning point in the movie, and I think that would have made for a more interesting story (remember, I liked this movie, but I didn’t love it). On the other hand, having him be a decent guy for the bulk of the film and doing the turn as part of the post-credit stinger, probably gave him some more depth and gives me something to really look forward to in the inevitable sequel. I’ll also confess that I really adore Chiwetel Ejiofor as an actor. He proffered a solid performance in this film, and if his wonderful performance in Serenity is any indication, he has the potential to be the best villain in the MCU since Loki. OK, granted that isn’t saying a lot, but my point is I am super excited to see him and Strange face off in the future. Anyway, with that huge digression, let’s take a look at the figure…

Mordo dons sculpted mystical robes quite similar to what he wore in the film. There are some minor inconsistencies, but overall I think Hasbro did a decent job with the costume. The top half of the costume is sculpted as part of the buck, whereas the bottom is soft plastic and hangs down around the legs. You get some nice detail in the form of cut lines and texturing, which to me are reminiscent (maybe a bit too much) of the costume designs for MCU’s version of Asgard. 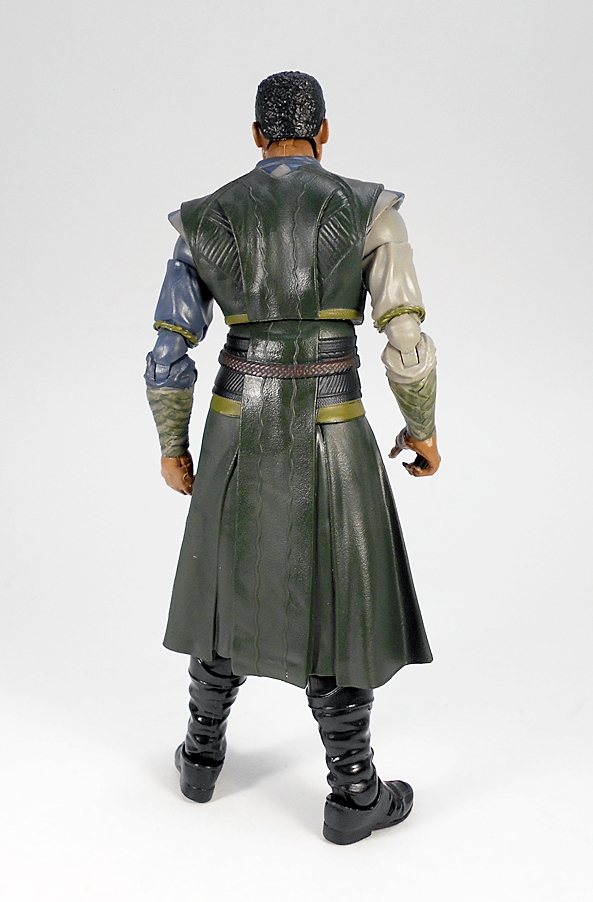 There’s a lot of detail in the belt, although the frayed trim that is supposed to hang down from the belt is just sculpted onto the robes and isn’t terribly convincing. Am I nitpicking? Probably. While the deco here is fairly muted, you do get a nice range of colors, including two shades of green, some gray, some blue, and black. The color scheme gives a bit of a nod to Baron Mordo in the comics. All the paint on my figure is very sharp and clean. With all that having been said, I just don’t find this figure terribly exciting and that falls more on the design than it does on Hasbro’s efforts. Plus, since I haven’t opened my MCU Doctor Strange yet, Mordo is quite the loner right now and forced to hang out with the comic-based figures.

The portrait is quite good and hits all the right points for me in sculpt, paint, and likeness. It’s a sharp sculpt that picks out enough characteristics in Chiwetel Ejiofor to make it recognizable to me. Incidentally, this is one of those many times, I’m happy I stick with written reviews, as I don’t have to butcher his name by trying to pronounce it. One odd thing worth mentioning is the really obvious seam running down the front of his neck. Weird. 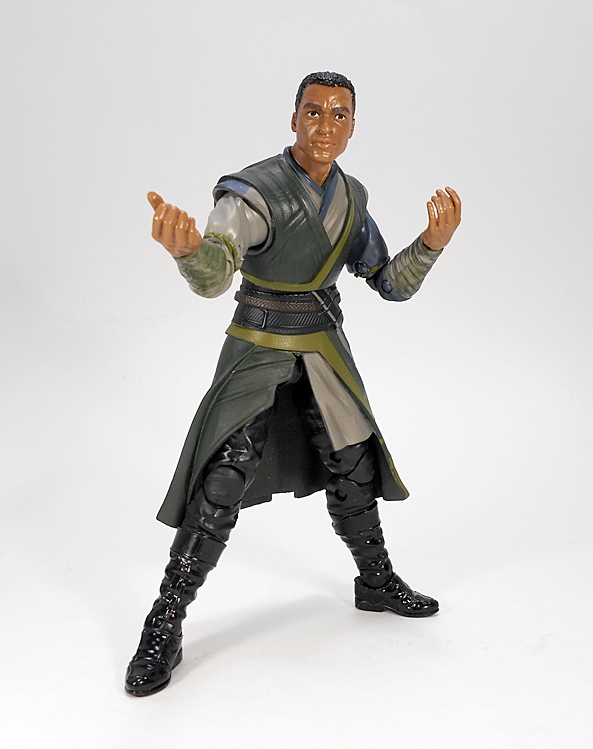 The articulation here holds no surprises. The arms have rotating hinges in the shoulders and wrists, swivels in the biceps, and double hinges in the elbows. It’s worth noting that the hinge on the right hand is orientated front to back, while the one on the left hand is side to side. The legs are ball jointed at the hips, double hinged at the knees, and have swivels at the thighs. The ankles are hinged and have lateral rockers. There’s a ball joint in the chest and the neck is both hinged and ball jointed.

In addition to the BAF parts, Mordo comes with his staff. It’s obviously a very simple accessory with just some wood texturing in the sculpt. It’s a little bendy, which is expected, yet nonetheless disappointing. And here’s the one place that the figure really stumbles for me and that’s not having a way for him to wear the staff on his back like he did in the film. A separate cross strap with a simple loop in the back would have been extremely welcome here. 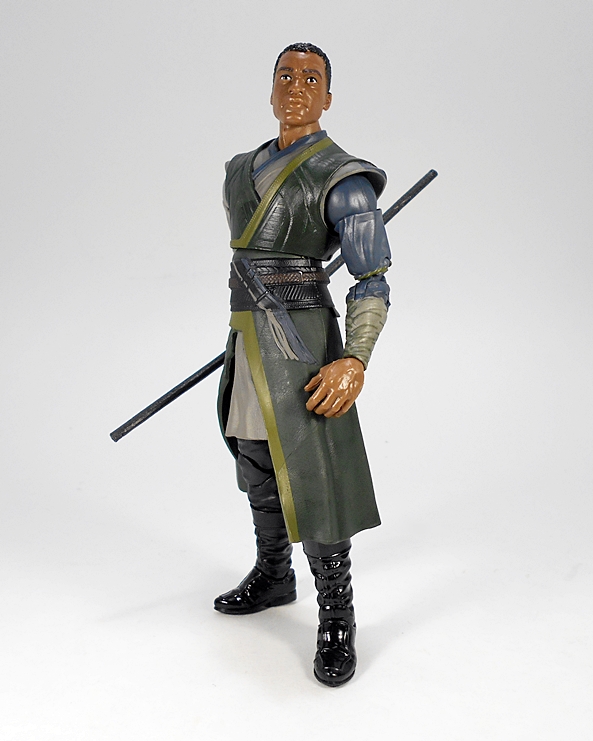 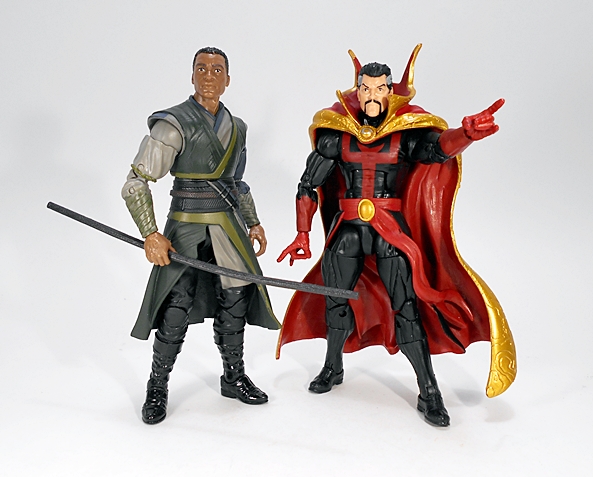 Mordo is a nice enough figure, but I think he suffers from a bit of a boring design, as well as being a sort of “one-off” release. I mean, sure we were going to get an MCU version of Doctor Strange, but then to just give us Mordo and not The Ancient One and Kaecilius seems like an odd choice. I mean, even as I was writing up this piece, I was wondering, “is anyone even going to care enough about this figure to read it?” Maybe once he becomes a proper bad ass, presumably in the next film, but then he’ll likely get a new costume and a new figure. Indeed, if Hasbro wasn’t going to go deep into the movie’s characters for this wave, I would have just rather they gave us comic book Baron Mordo, so I could put Strange on my MCU shelf and have a Mordo for my comic shelf. There’s certainly precedent for that, as they gave us a comic version of Batroc instead of the MCU version from Winter Soldier. Ah, but I’m probably being too picky.