If you’re a casual comic fan and collector of Marvel Legends, then sorting out the who’s who with some of these Spider-Man themed figures is likely to bring on some migraines of epic spidey-sense proportions. A lot of this confusion can be blamed on Spider-Verse, which threw together a wide range of characters from a wide range of universes. I found it to be a great read and I’m really stoked that we’re getting our share of figures from the fallout. Enter Ashley Barton. Bad-ass descendant of Peter Parker’s daughter and Clint Barton from one of them other universes, and who’s figure I happen to be opening today! 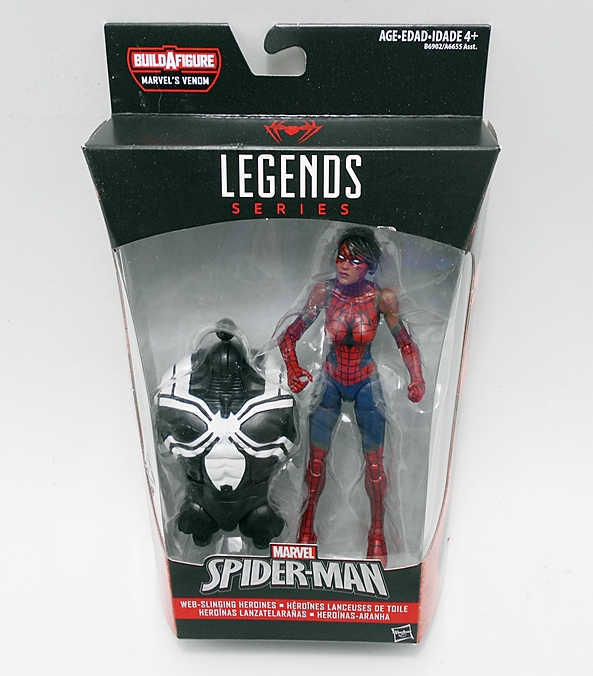 Ashley shares her slot with Silk, so her name doesn’t appear on the front of the package, instead it just says “Web-Slinging Heroines.” In fact, her name doesn’t really appear on the back either, so this figure is aimed at people who are up on their funny books. Everyone else is just going to be scratching their heads. And as expected, Hasbro opted to not go with printing “Spider-Bitch” on the package, although seeing that in the toy aisles would have been a hoot and certainly would have brought a whole herd of outraged Florida moms out from their dens. Oh yeah, see all that empty space in the bubble above the BAF part? That would have been a perfect place for some extra hands, but let me come back to that point, because I’m getting ahead of myself.

I really dig this character design and I think Hasbro did a fine job translating it to action figure form. Granted, this is achieved mostly through paint, and I would have liked to see some sculpting to separate the bare shoulders and biceps from the sleeves, but what we got here still works well enough. The darker tones of red and blue really suit the character and I’ll confess to being a little envious of where the spider emblem has parked itself. There are a few smudges on my figure, but overall the paint is pretty sharp, and that’s impressive seeing as how intricate the web pattern is. Hell, even the pins in the knee joints are painted properly, something that we can’t always take for granted with these figures. 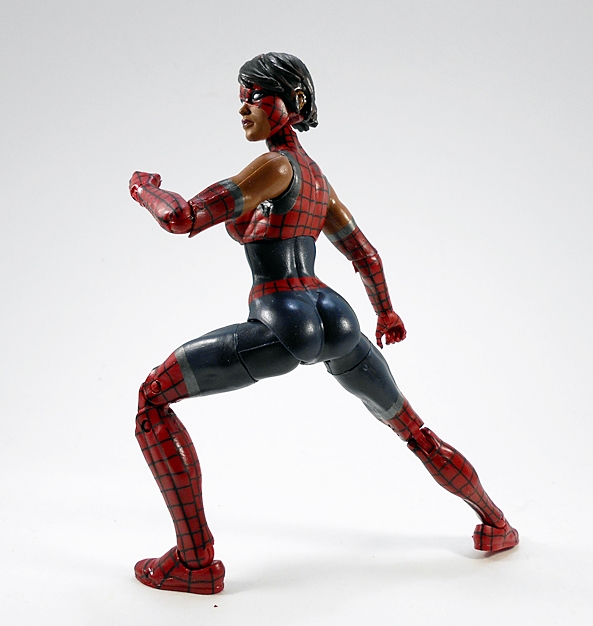 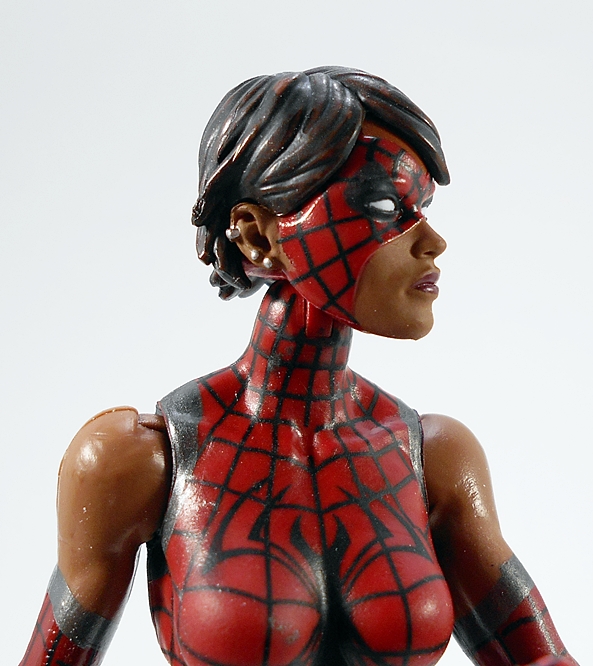 The head sculpt is something else that I really dig about this figure. They captured Ashley’s look perfectly, right down to the multiple earrings. Here we do get some sculpted lines separating where the mask ends and her skin begins. I love the way the sculpted hair covers over part of the mask. I’d definitely rank this portrait pretty high on the list of greats.

The articulation here is pretty standard stuff for the female Legends bucks, which means its serviceable, but not exceptional. You get rotating hinges in the shoulders, elbows, and wrists. There are swivels in the thighs, but none in the biceps or lower legs. The knees are ball jointed, and the ankles have both hinges and lateral rockers. There’s no swivel in the waist, and just a ball joint under the chest. The neck has the usual ball joint and hinge combo. This buck seems a little lacking under normal circumstances, but when its a member of the Spider-Family, it just doesn’t feel agile enough. I can’t even get her leg up for those really high kicks. 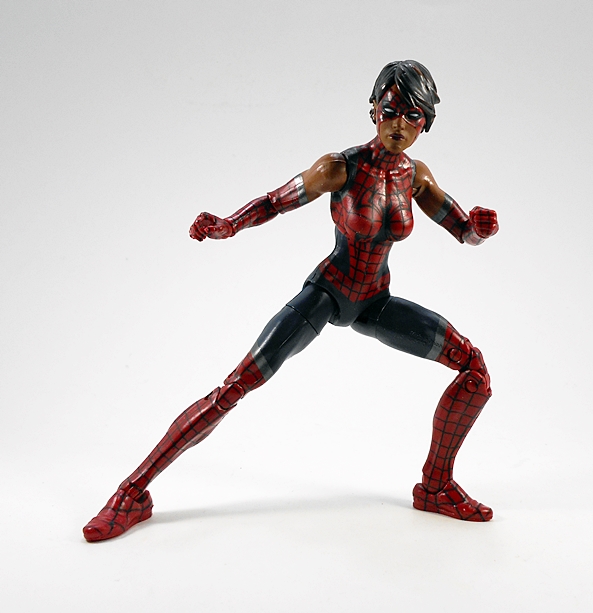 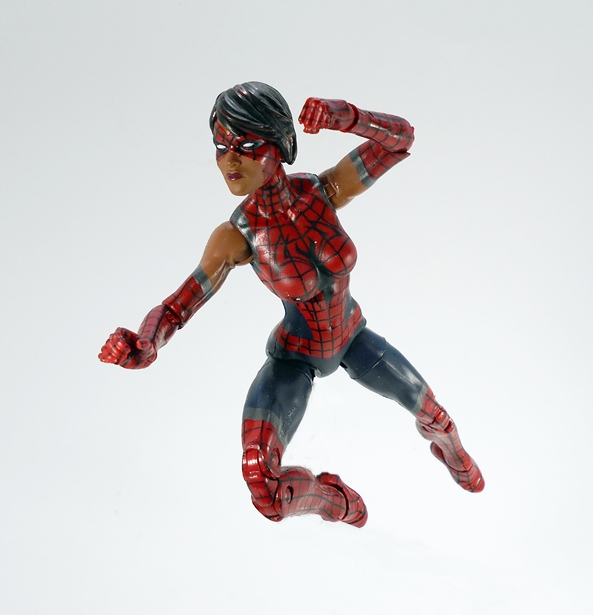 And then there are the hands. Hasbro got me used to expecting a passel of extra hands with my Spidey figures. Ashley here has no extras, just the one fist and one accessory-holding hand with no accessory to put in it. If they weren’t going to give her multiple hand options, I’m not sure these were really the way to go here. It just seems oddly limiting. 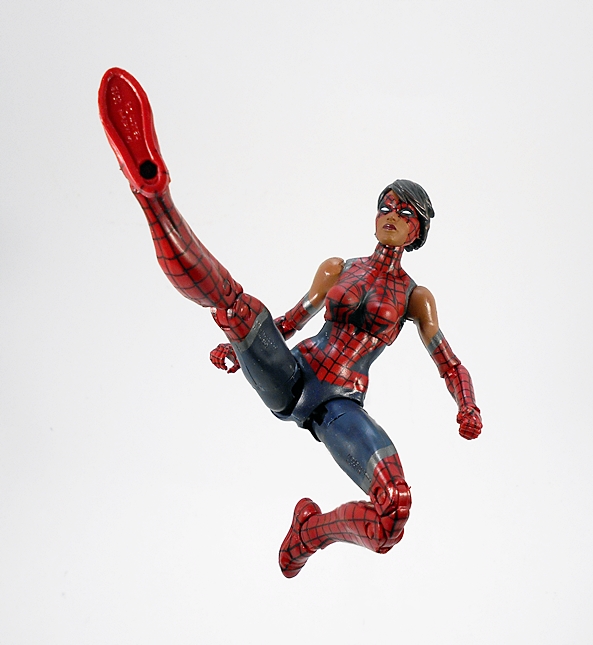 It may sound like I’ve had more than my usual share of complaints here, but truth be told I like this figure. She looks great on the shelf and lately I’m all about picking up the figures based on characters that are new to me. It’s all about the Universe building, right? Or in this case, the Spider-Verse building. I would have liked to see Hasbro retire this female buck by now in favor of some double-hinged elbows and bicep cuts, but at this point, I don’t think its going to happen any time soon. And when a figure looks this good, I guess I’m OK with that.