The New 52 may be a thing of the past, but I still have some unfinished business with its action figure legacy. DC Collectibles has certainly done their part to immortalize this controversial era in plastic form and among these lines, one of my favorites has been DC Comics Super-Villains. I recently found a box of these stashed up on a shelf in one of my closets from just before Christmas. It’s been almost a year since I last looked at any figures from this line, so today I’m going to open up Captain Cold!

The window box is right in line with what DCC was using for most of their figures at the time of this release. It’s pretty generic, but it’s also crisp and snappy and I kind of like it. The window shows off the figure very well, you get a shot of the figure on one of the side panels, which is perfect if you want to keep these boxed and line them up on a shelf. You also get an extended back with a J-hook if you want to pin them to the wall. The box is black to give it that Super-Villains vibe and DCC always threw in a splash of color on these boxes to coordinate them match the figure. In this case it’s a really nice shade of blue. As always, everything is collector friendly, but I don’t save these boxes. I barely have space for the figures!

And here’s Snart out of the box. While I tend to be OK with a lot of the costume changes in the New 52 Era (Yes, I realize that’s a minority opinion to hold), I was not overly pleased with Snart’s. In fact, next to New 52’s first version of Poison Ivy, Captain Cold’s look is one of my least favorite of the whole shebang. With his weird hat-hood, his sleeveless jacket, and his Art Deco vibe, I’m just not sure what they were going for here when they designed it. That’s not to say the figure doesn’t look good. DCC did a fine job translating this look to figure form. The white paint is super clean, the shade of blue is gorgeous, and the gold belt really makes the figure pop all the more. Overall, the paint lines are pretty clean too.

My one complaint is that they really cheaped out on his jacket, as it’s molded as part of the torso. It looks fine from the back, but the open flaps on the front are chunky and not terribly convincing. DCC has done plenty of jackets by overlaying a separate plastic vest onto the figure, and since this one is sleeveless, not going that route here seems like a huge missed opportunity. 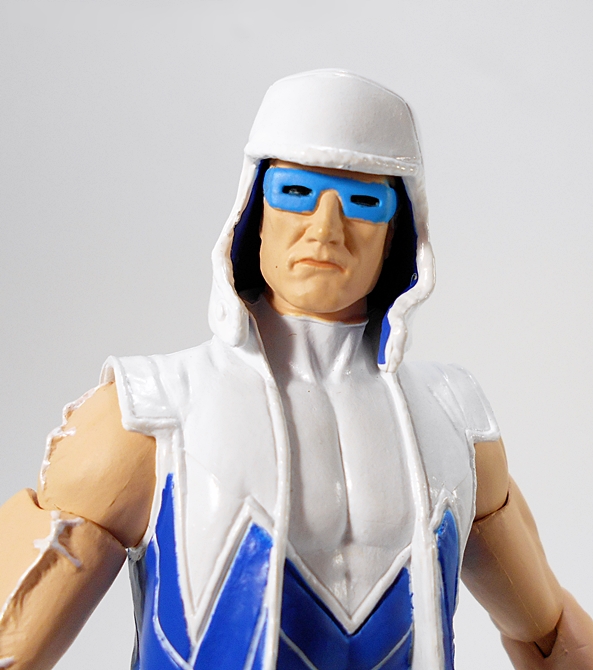 The head sculpt here is quite good and the distinctive glasses at least provide some link to Snart’s more classic look. I’m still not a fan of that weird hood-hat, though. As for articulation… Well, DCC has made some major strides in articulation since the DC Direct days, but you wouldn’t really know it from this figure. His arms feature rotating hinges in the shoulders, swivels in the biceps, and hinges in the elbows. His right hand has a swivel, but that’s only because it pegs in, as the left wrist has no articulation. The hips feature a standard T-crotch, which at this point is a terribly dated design. The leg articulation is rounded out by simple hinges in the knees. The head may be ball jointed, but I can only get a swivel out of it. Truth be told, this is still better than what we usually got with DC Direct, but not by much.

Luckily, this figure really shines through his effect parts. For starters, the forearm is all iced over and it looks fantastic. It’s cast in jagged, shimmery plastic and it’s probably the most convincing ice I’ve ever seen in plastic. It’s also sharp as hell in some parts. I also really dig how they painted the icy veins in the bicep as part of the effect. This is great stuff. As already mentioned, this forearm is designed to pop off so you can swap it out with his other ice effect…

A spiked ice ball!  This thing is a pretty big accessory, and because of it, Snart here probably uses more plastic than any other standard release in this line. This thing looks every bit as good as the other ice arm and those spikes are really sharp. I got a couple of ouchies when I was trying to peg it into the arm. 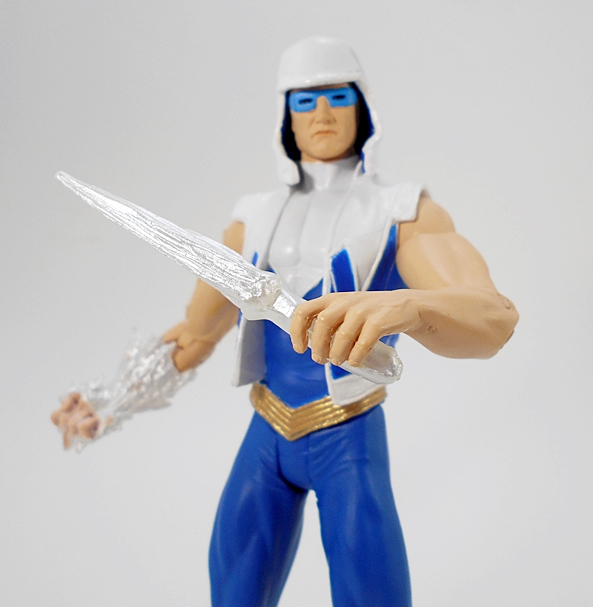 Finally, Captain Cold comes with an ice dagger that he can hold in his left hand. While not as impressive a sculpt as the other two ice pieces, it’s still pretty cool. 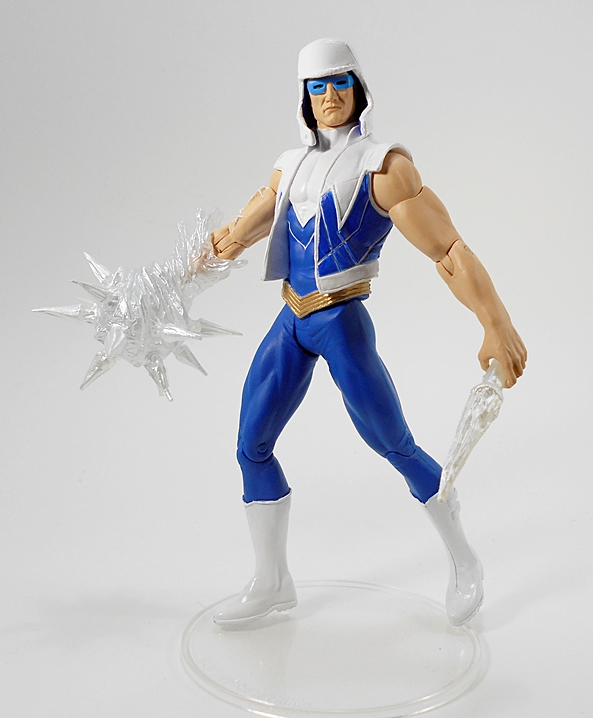 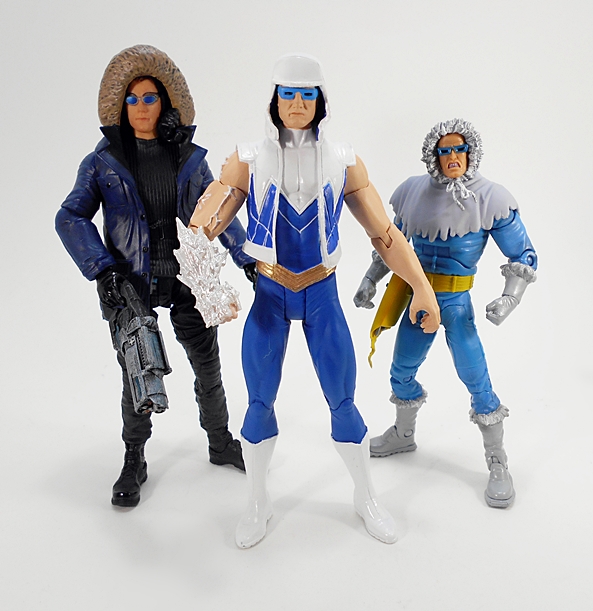 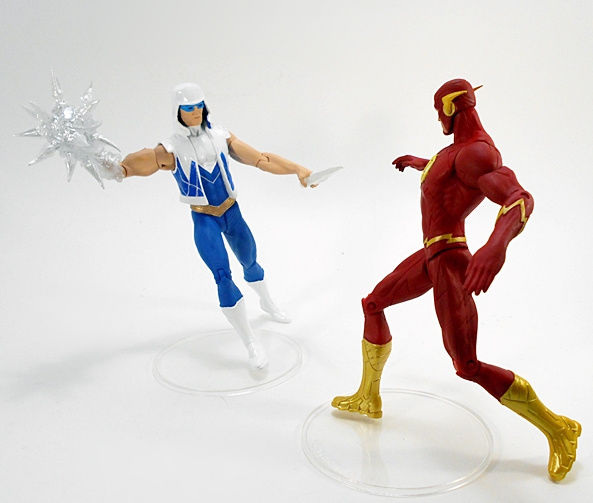 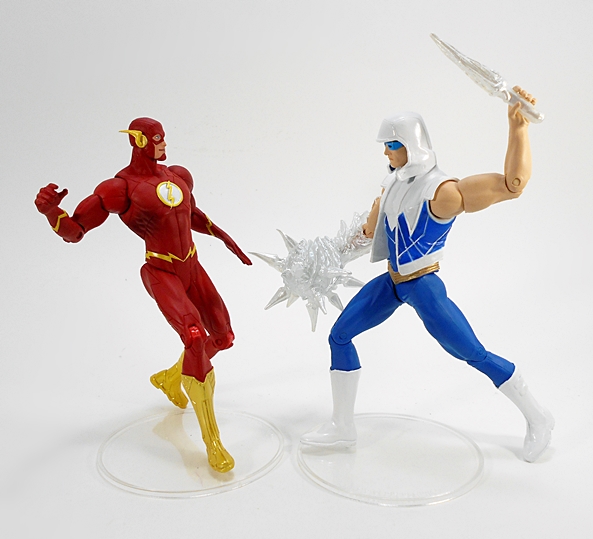 The Super-Villains figures tended to run around $21 a pop. Some have gone up in the meantime, others have gone down. I remember picking up Captain Cold and some others before Christmas for under $10, and a deal like that can certainly temper my expectations for a figure. That having been said, this guy is just a roller coaster of ups and downs. I don’t dig the look all that much, but I really loved Snart in his Post-Forever Evil Justice League appearances with Lex Luthor. The articulation isn’t great, but stand him up there on the shelf with his ice effects, and he looks pretty damn good. If nothing else, he can keep my New 52 Flash figure company.