Once again, I must disappoint all you Convertorobot fans, as it is Thursday and I have no new Transformers to look at. Maybe next week. We’ll see. In the meantime, let’s check out a robot that does not turn into anything!

I was mighty peeved to find out that the infamous droid with the bad motivator was coming to the 6-inch Black Series as a Gamestop Exclusive. There’s only one of these stores in my area and going in that place subjects me to a vortex of screaming kids, punks trying to sell games for drug money, and pushy salespeople trying to get me to opt in to some membership card or magazine. I hate the place. Besides, they’re closing stores left and right, so maybe giving them an Exclusive isn’t the best idea, Hasbro. Next you’ll be giving exclusives to other sinking retail ships like K-mart… oh, riiiight. Well, it turns out my anger was all for naught, because I was able to pre-order this guy on their website pretty easily and he showed up on my doorstep yesterday. 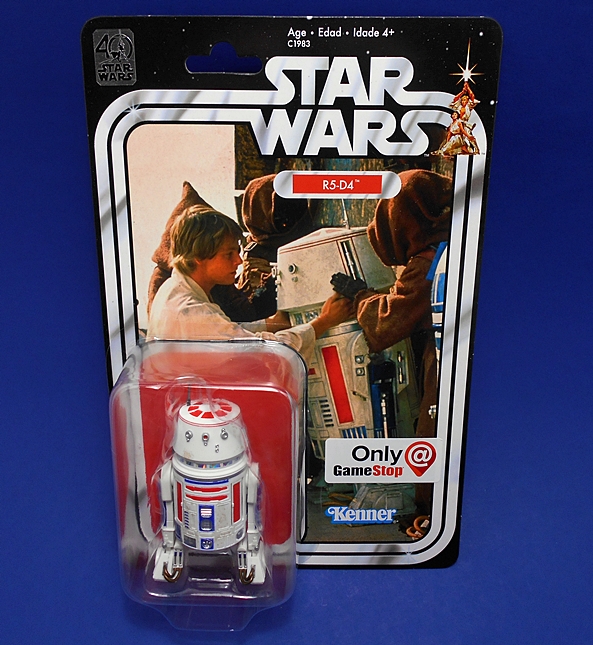 Hasbro is doing over-sized vintage cardbacks for the 40th Anniversary. A lot of these have been re-issues of “The Original Twelve” and I think these look terrific and I really dig how they will stand for easy display. So far, I’ve managed to keep myself from buying a set to keep carded, but that resolve may buckle if retailers start doing sales on these.. R5, however, is currently only available in this packaging, so I had no choice this time. Oh yeah… and thanks Gamestop for putting your obnoxious sticker on the card. It probably comes off, but it’s a shitty thing to do to an item that is being sold in collectible packaging. Good thing I bought this droid to open. 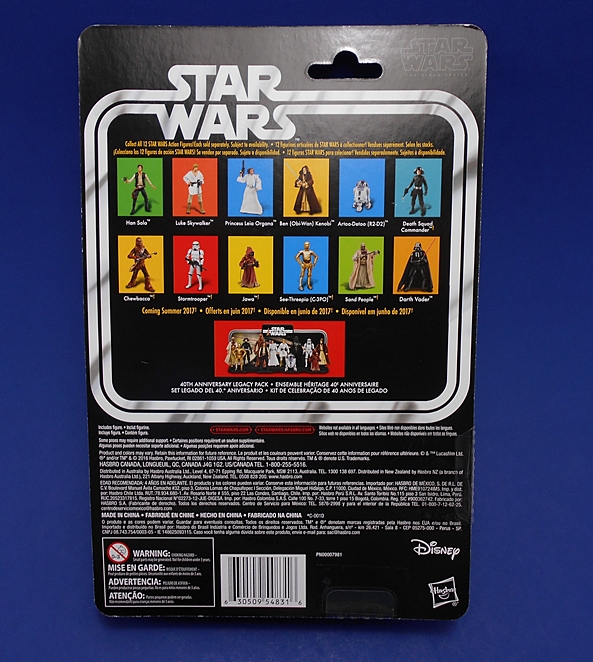 The back of the card is pretty damn cool too. It shows the twelve figures that are getting this carded treatment. All are re-issues, with the exception of the Sand Person, Jawa, Death Squad Commander, and I suppose Darth Vader, since he’s supposed to at least have a new head sculpt. There’s also a shot of the Early Bird-inspired display set that Vader comes with. Yup, I pre-ordered that thing. I have no willpower. And speaking of no willpower, as you can probably guess, these carded figures are not collector friendly and as good as it looks, I’m about to tear this one open. 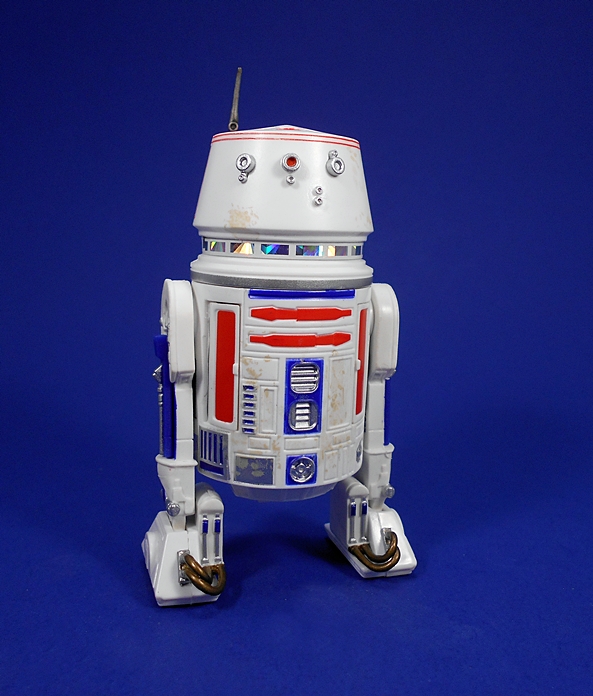 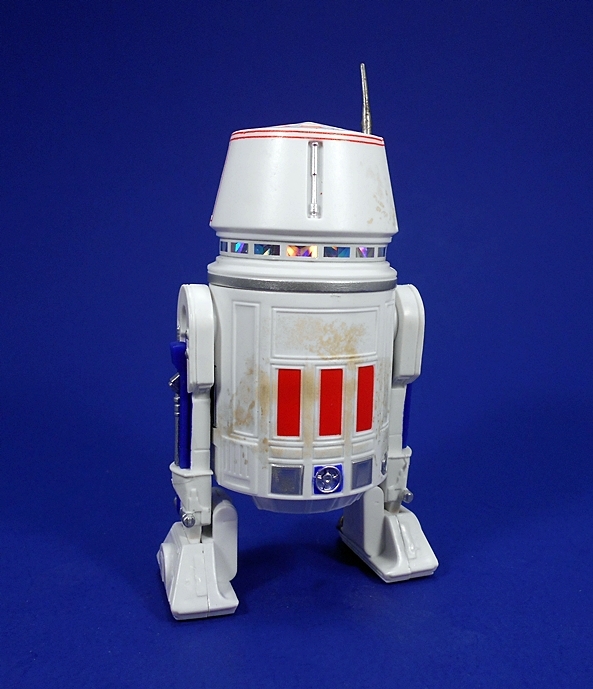 Here he is, and as expected from the neck down he’s a straight repaint of R2-D2, and that’s not a bad thing, because this is a pretty damn good Astromech body. All of the familiar panel lines are sculpted in, and I really dig the hoses on his feet. Besides the red accents, R5’s deco also includes some light weathering, whereas I had to do my own on R2 with a mechanical pencil. I think they distressed him just the right amount. It doesn’t look heavy handed at all. 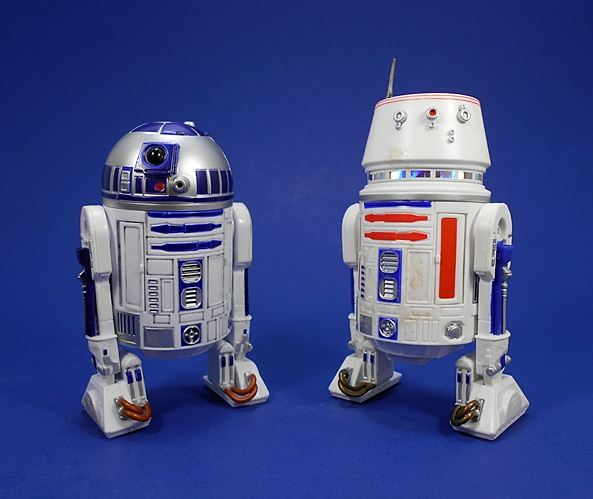 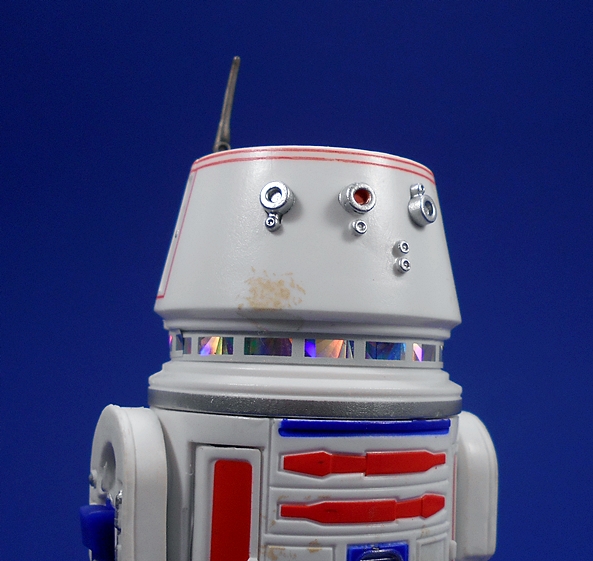 The head is also a very good sculpt and escapes the big fault of the R2 figure by not having those eyesore seams running up the sides. R5’s head still has seams, but they’re very well hidden. The antenna is made of bendy plastic, but it doesn’t seem like it will be prone to warping. You get a little bit of weathering on the head, but maybe here it could have used a smidgen more. The paint on the eyes is sharp and clean and the hologram sticker strip that runs around his neck looks nice, although I already had to stick the end of it back on, so I’m not sure how long that sticker is going to last. 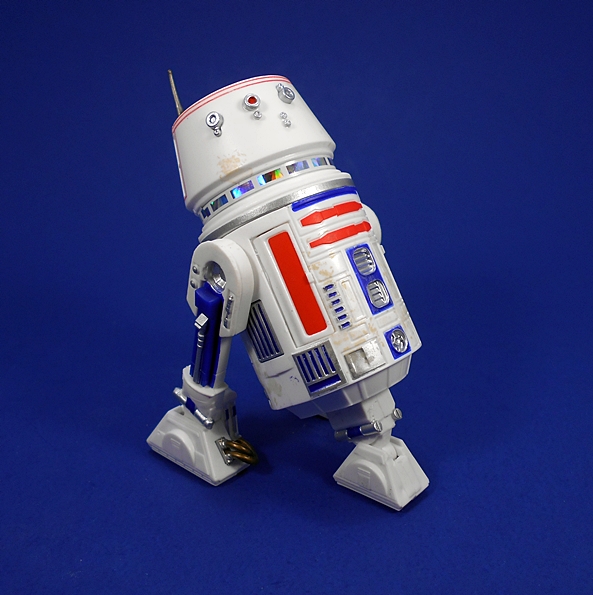 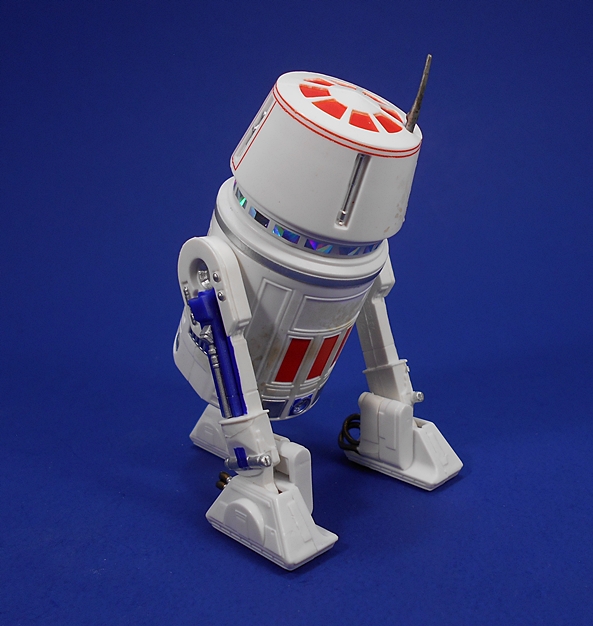 As with R2, the third leg still retracts by turning the head. I wasn’t a big fan of this feature when I first saw it, but I’ve cooled on it a bit. It just seemed rather gimmicky for a collector line, but then the Black Series’ collector line credentials have been pretty shaky. I should also note that R5 doesn’t share any of the opening panels in his head that R2 had. It seems like they could have given us a swap-out panel with a bad motivator, but nope! 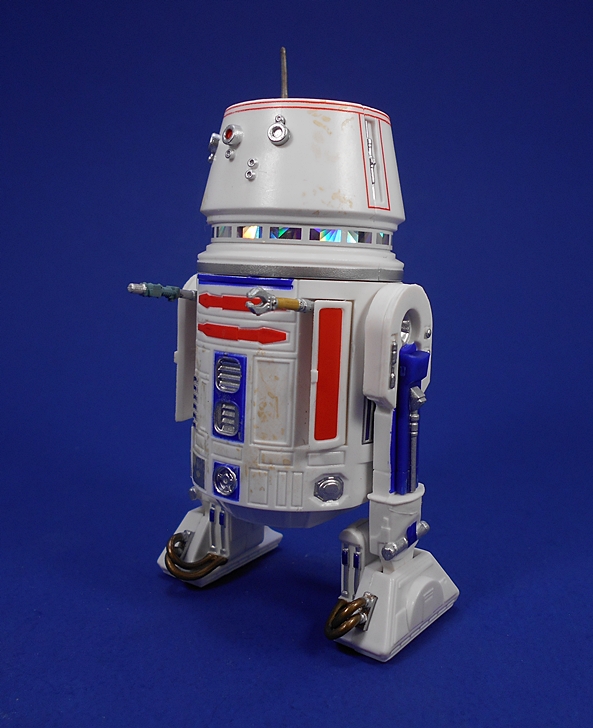 The two vertical side panels, on his front, however, do still open and he does have his little arms that swing out. It probably would have been easy for Hasbro to just glue these shut and not worry about them, so I’m pretty happy to see they survived. 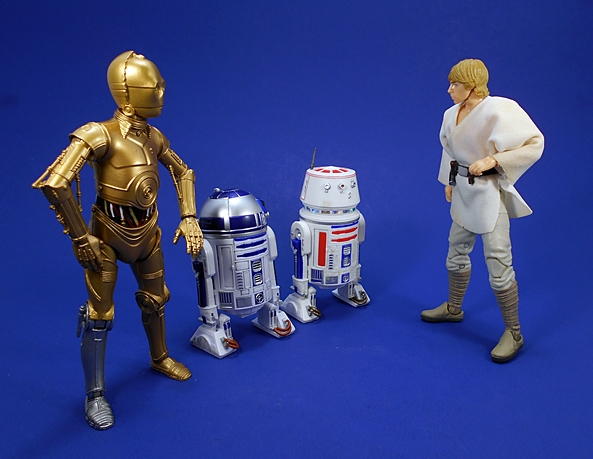 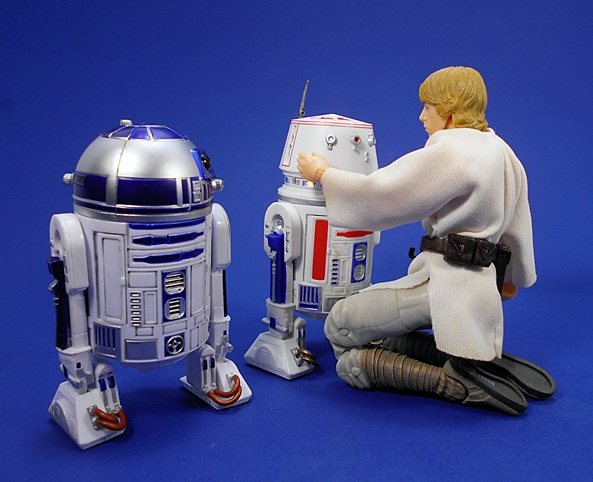 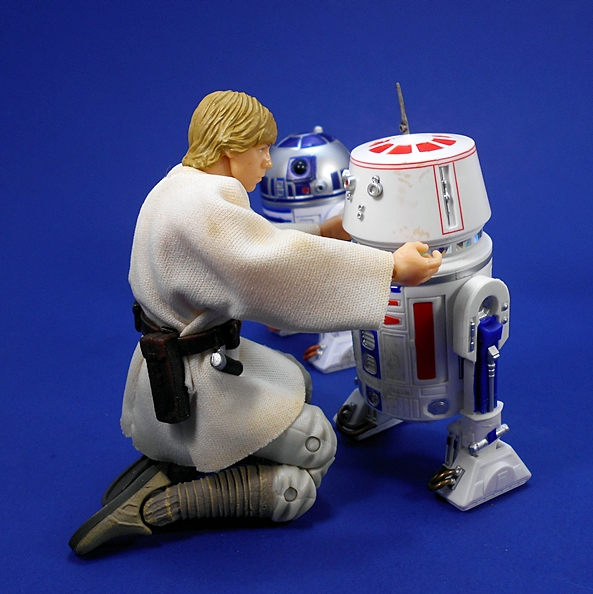 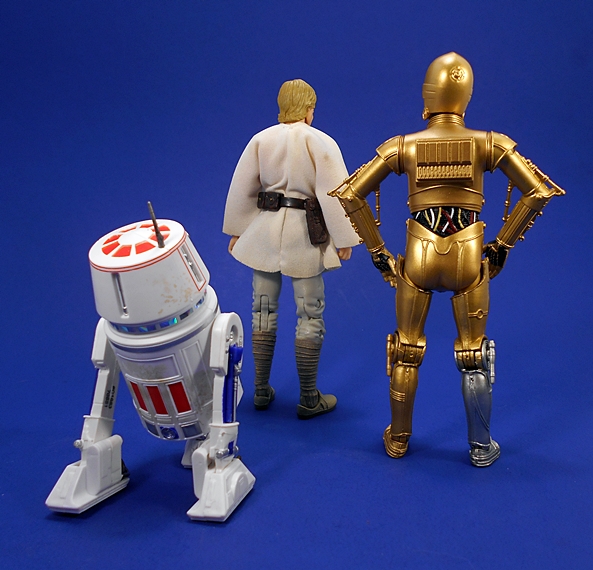 In every way, R5-D4 is a great little figure. in fact, the only issues here for me are price and availability. At $22, you’re paying an awful lot for very little. R2 came with a bunch of extras and R5 comes with squat. It makes me wonder if he was made an exclusive release just to justify the price tag. Why not R5 and a couple of Jawas in a window box for $50? That would have been a nice deal. Plus, making him exclusive to Gamestop is just bewildering to me. I’ve never even seen Star Wars figures in a Gamestop outside of maybe Funko Pop! Vinyls. Luckily, I didn’t have to actually go in a Gamestop to get him. I pre-ordered mine when it first went up on the website and it became “Unavailable” not long after that. Disappointing collectors by making a deal with a dying game retailer? Not cool, Hasbro. The better way to go would have been to put him in a window box for wide distribution and let the vintage carded packaging be your exclusive. Ah, but what do I know?