Guardians Vol 2 is in the theaters, and what a fun ride it is! It’s got action, laughs, and some wonderful characters, and a soundtrack that’s so cool it has no business being in a modern Hollywood flick. I’ve only been to see it once so far, but I’ll likely be back when I can find some time next weekend. And as luck would have it, I’m also in the process of checking out the new Guardians themed wave of Marvel Legends. Last week I looked at the new Star-Lord figure and today I’ll be checking out Yondu!

No spoilers here, but I will say that I was happy to see Yondu play an expanded role in the new movie and Michael Rooker was fantastic in it. Of course, I was disappointed last time that Yondu didn’t get a Legends figure, but all is forgiven now, as thanks to the inclusion of two head sculpts, this figure can really work for either movie. I’ve got nothing new to say about the packaging, so let’s dive right in!

Captain Udonta’s outfit features his long duster and other Ravager garb, and boy did Hasbro go nuts on the detail here. The jacket itself is replete with rumples, stitching, reinforced patches, textured areas, and even a bit of wear and tear. For all the times that Legends gets by with a simple (and perfectly suitable) painted buck, it’s figures like Yondu that show Hasbro can really shine when dedicating themselves to an entirely new sculpt. Under the coat, you get more of the same, including texturing on the vest, individually sculpted buttons, as well as all sorts of buckles and straps. As soon as I had Yondu out of the package, I spent a good deal of time just turning him over in my hands and getting lost in all the amazing minutia of his outfit. All around, this is nice work!

Ravager outfits aren’t the most colorful costumes, so Yondu gets by without a whole lot of paint. Still, what’s here is pretty good. You get some gold fixtures on his coat, including the Ravager emblem, which turns out to be pretty critical in one hilarious little movie sequence. The shoulder strap is painted a lighter brown to distinguish it from the coat. Under the coat, you get some additional paint for the buttons of his vest and the harness he’s wearing over it. Of course for some great added color, we can look to the portraits! 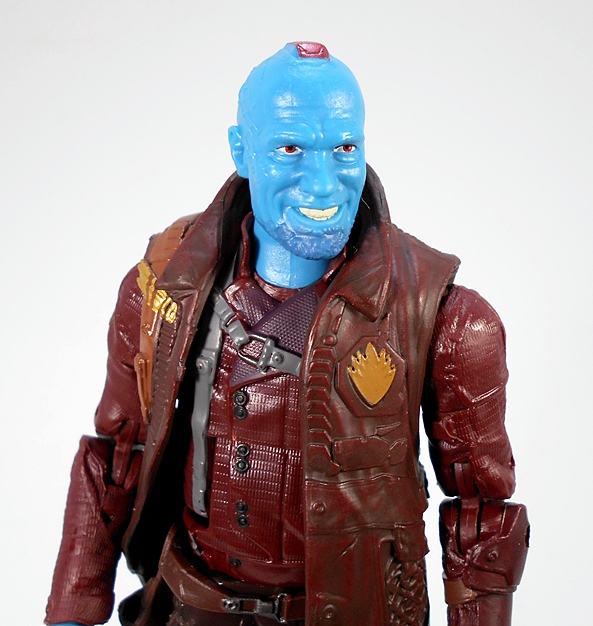 The stock portrait features Yondu with the crest we saw in the first film, and part of the second. Overall, I think this is a really solid sculpt and a pretty good likeness to Rooker. The paint for the eyes is applied clean and straight, and while the paint for the teeth is passable, it could have been a tad sharper at the corners of his mouth. I’m also considering taking a silver sharpie and coloring a little silver on his teeth. Still, I’m nit-picking on a figure that has very little to complain about.  I like the grimacing expression and the fact that the whiskers are part of the sculpt is pretty cool. 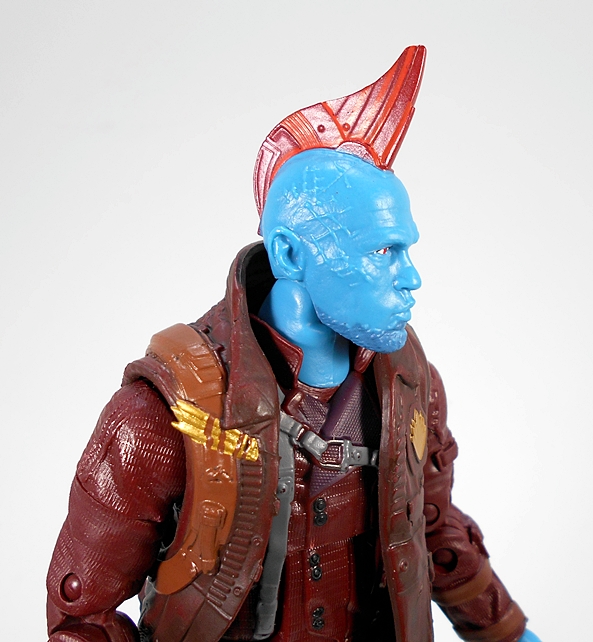 The second head features Yondu with his fin. This is something of a plot point in the film, but I mainly like it because it nods back to the look of the character in the comics. The sculpt and paintwork on the fin are both particularly good. You can also see here that he has the scarring sculpted into the side of his head, which is actually present on both head sculpts. This sculpt also features Yondu’s lips pursed up into a whistle, which makes this portrait work particularly well if you plan on displaying him with his arrow in action.

And speaking of action, the articulation here is identical to what we saw last time with Star-Lord. In case you missed that review, here’s a rundown… You get rotating hinges in the shoulders and wrists, double hinges in the elbows, and swivels in the biceps. The legs are ball jointed at the hips. have double hinges in the knees, and swivels in both the thighs and the boots. The ankles are hinged and have lateral rockers. Yondu wasn’t exactly super agile in the films, as he lets his arrow do most of the work for him, so I think the pose-ability here is far more than adequate.

In addition to the extra head and the Titus BAF part, Yondu comes with his deadly arrow. The arrow here actually features an effect part so that you can display him with the arrow flying out of its sheath on his belt. The effect works surprisingly well, but I do think it was a little cheap of Hasbro not to drop a second arrow in the package, so you could put it in the sheath for when he isn’t using it. Ah, but considering all the work they put into the figure, I’m inclined to give them a pass on that. 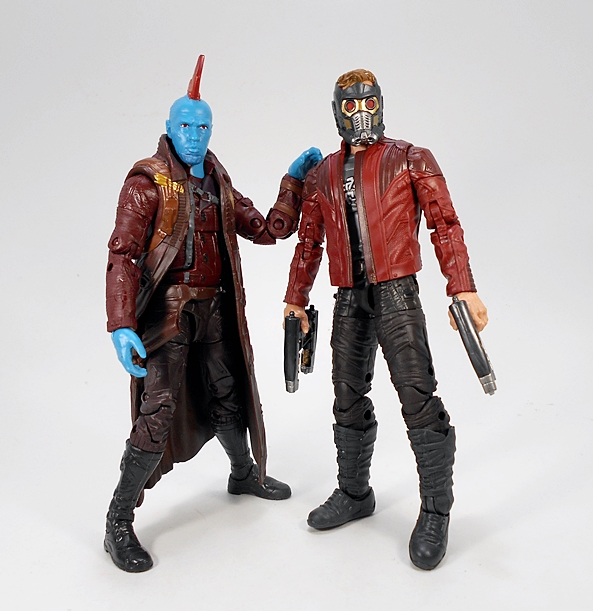 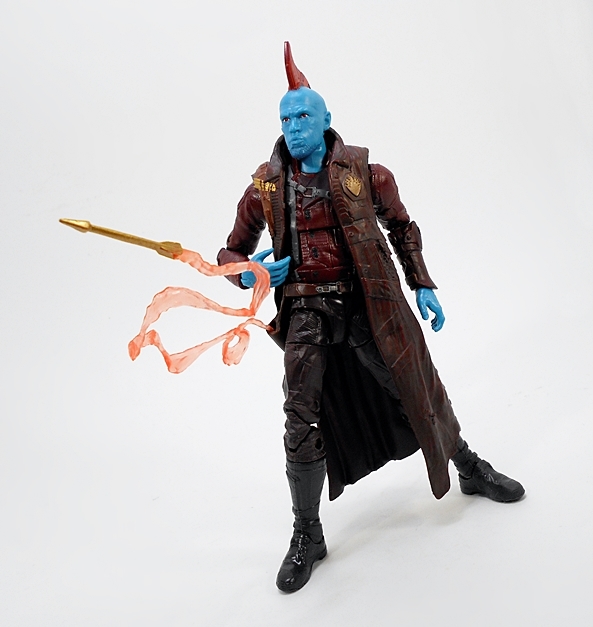 I may only be two figures into this wave, but so far Hasbro is really nailing it with these Guardians Legends. Like Star-Lord, Yondu is a great figure and hits all the right points from sculpt to paint to articulation. I’ll confess that I will very likely be picking up a second Yondu, just so I can display one from each movie and an extra arrow to snip the effects part off of. And while I know it’s just a pipe dream, I really wish there was some way that Hasbro could get us a figure of Kraglin in the Legends scale. Hell, even if they boxed him with a repacked Yondu, I’d still buy that in a heartbeat. Anyway, on the next Marvel Monday, I’m going to finish off the MCU Guardians in this wave with a look at Drax.