After a long drought through most of May, once again I’ve been putting the Transformers back in Transformers Thursday. Today I’m checking out a figure that I originally was not going to pick up, but after a while of going back and fourth on him, I decided to give him a try. He’s Blaster, and while I still kinda dig the Generations version as a Cybertronian mode, it was ultimately the old school “ghetto blaster” mode that finally won me over on this new Titans Return version.

I’ve always had mixed feelings about Blaster’s G1 toy. On the one hand, it looked great in both modes, had decent articulation for G1 standards, and his robot mode looked fairly close to his Sunbow animated counterpart. You could load his cassettes into him and he was a really fun toy. On other hand, he was so damn big! You couldn’t have proper fights between him and Soundwave, because Blaster was like a giant by comparison. Well, once again, Hasbro went a little overboard with Blaster’s height, as this is a Leader Class toy, but I’ll address that later. For now, let’s check out Blaster’s alt mode. 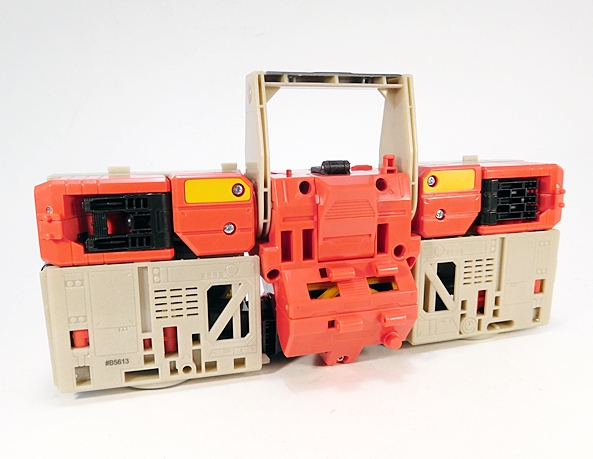 Glory be to the 80’s! Well, almost. Blaster’s alt mode is indeed a fairly authentic looking portable sound system. It reminds me a little bit of the Emerson that I had sitting on a bookshelf in my bedroom when I was a teenager. I used to use that sucker to record all my favorite hits off the radio. Duran Duran, Bowie, Tears for Fears… oh, the memories! And all in all, this is a pretty good looking alt mode. Yeah, you can see through parts of it and none of the controls are terribly convincing, but hey, you have to leave some room for improvement for when Takara gets around to Masterpiece Blaster. Granted, the back is pretty f’ugly, but then the back sides of real tape decks weren’t usually all that great looking anyway. 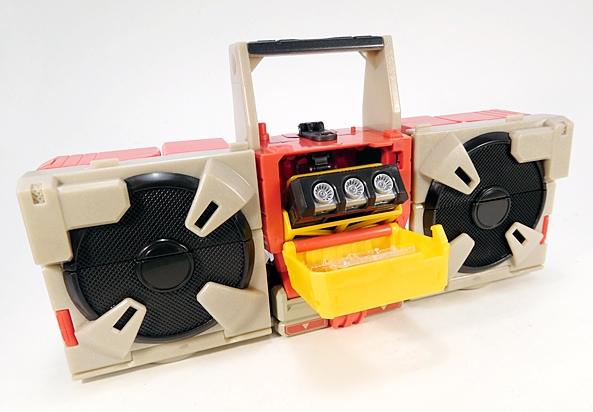 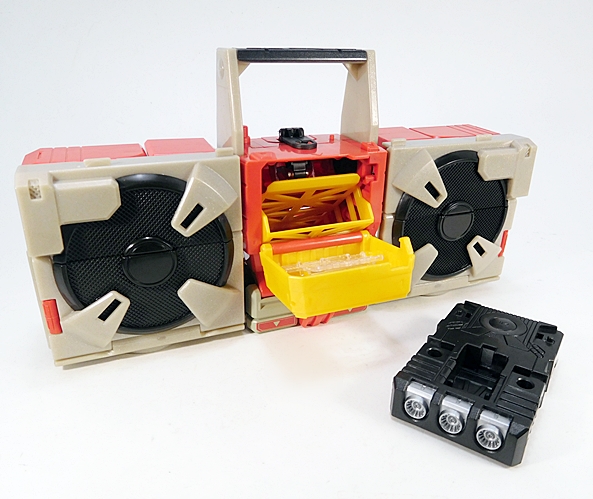 Blaster includes a carry handle and there’s a button that causes his cassette door to spring open… only it isn’t really for cassettes. Instead, it holds what are supposed to be some kind of data slugs. Does anyone else find it ironic that Hasbro couldn’t bring themselves to make Blaster an actual cassette player, and yet they’re selling a Role Play Walkman for Guardians of the Galaxy in the very next aisle at Target? Anywho… Blaster comes with a piece that fits in there, but it’s not even made up to look like a data slug. It’s really just a piece for his base mode, so let’s lay that aside for now and grab Rewind.

Rewind fits in there perfectly. I guess this set up could be akin to one of those charging dock/speaker systems for your digital music player/phone. The fact that Hasbro made the dumb decision to make Rewind a data slug and yet still put a cassette sticker on him makes me feel like I’m putting a micro cassette player into a larger cassette player. But, whatever. Rewind can go inside him, and eject out, and I guess it’s still better than those horrible chunky discs that they designed for Generations Blaster. Let’s move on to his second alt mode… the ambitiously titled “city mode!” 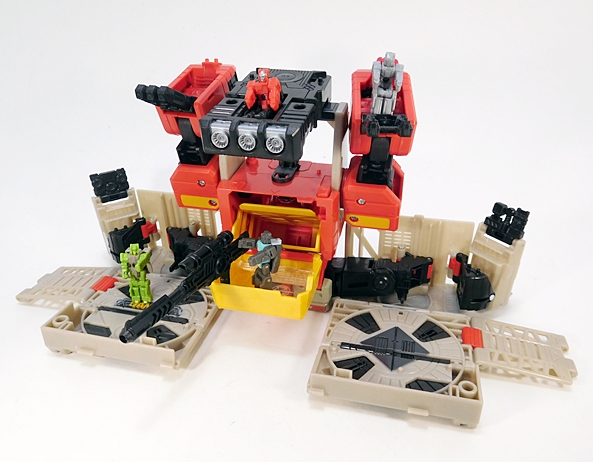 As far as third mode bases go, this one isn’t terrible, although calling it a city is unfortunate. At best it’s a battle station. You do get some positions on top for Titan Masters to operate, a gun platform in the middle, and a couple of platforms with ramps to be used as landing pads or perhaps maintenance bays for vehicles. There are also a few ports to mount other weapons. Truth be told, I’m actually surprised at how much I dig this mode. I don’t think it compromises the robot or stereo mode at all and it’s kind of a fun little playset for the little Titan Masters. And as long as we’re on the subject of the little guys…

Blaster’s Titan Master, Twin Cast, is possibly one of my favorite of these little guys. The red and black plastic just looks great on him and he actually has some paint on his tiny little face, which is nice even if they did get a little sloppy with the blue. The fact that he’s just a tiny version of Blaster is adorable. Obviously, Twin Cast transforms into Blaster’s head, so let’s move on to the robot mode.

I was in love with this robot mode the moment I had it out of the box. I mean, damn is he great looking! The proportions are excellent and he’s just a big bundle of G1-boxy goodness. I’m not a huge fan of the gray plastic they used, but that’s about the only thing I can complain about here. And I don’t mind it so much when it’s tossed in with that beautiful red plastic body and that bright yellow chest. Hasbro also sprang for some wonderful paint apps on the shoulders and lower legs to mimic the stickers on the original toy. Even those lower legs, which I thought were going to be too big and chunky, actually look and feel fine on him. 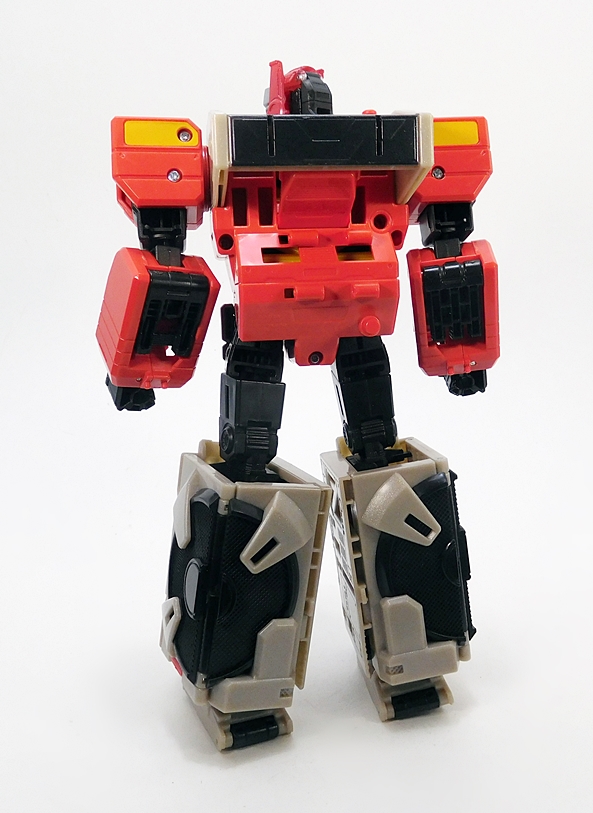 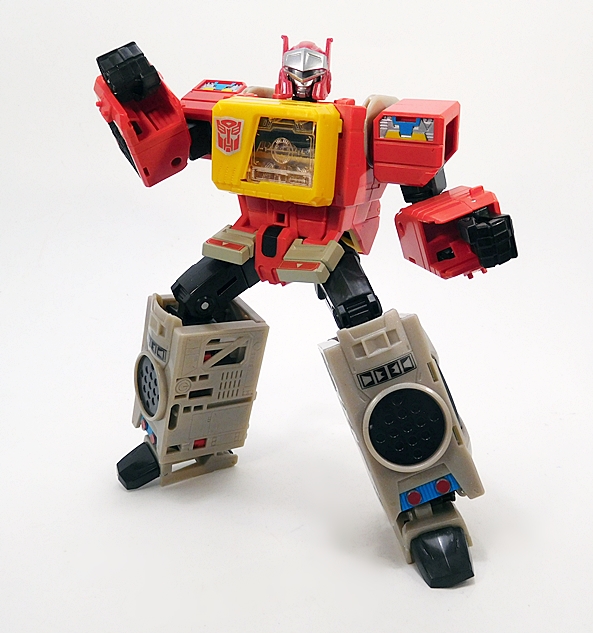 Like his stereo mode, Blaster’s robot mode ain’t too pretty from the back, but it isn’t all that bad either. The way the speakers wrap around his legs is really clever and looks cool. And thank Primus that handle folds down behind his back, because when I first saw pictures of this guy in the box, I thought that had to stay above his head.

Twin Cast forms what at first looks like a rather un-Blaster-like head. It actually strikes me as more of a Perceptor portrait than Blaster. It’s also way too small. Thankfully, he has one of those flip up helmet gimmicks and…

Voila! You get a Blaster noggin that makes for a very nice nod back to the original toy. I really hated the flip-up helmet gimmick on Galvatron, I was OK with it on Powermaster Prime, but here it works beautifully. It fits well, it looks great, and the engineering allows it to keep full rotation in the neck. Not bad at all! 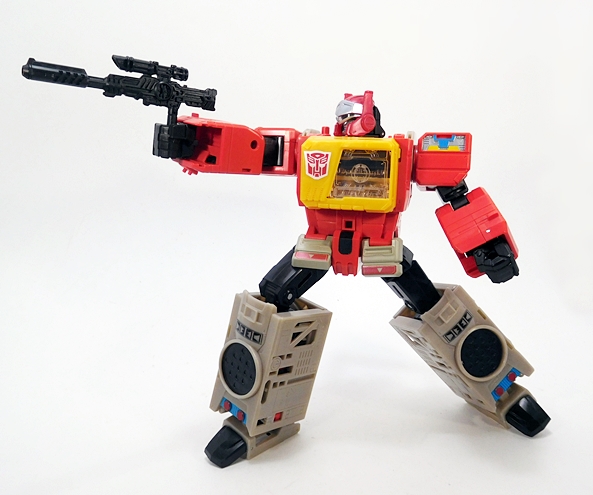 In addition to the data slug/base part, Blaster comes with a rifle that’s a pretty good homage to the G1 toy’s weapon. It’s been scaled back a little and made more compact, but the key similarities in the design are certainly there.

So, I can honestly say that I’m so happy to have picked up Blaster, but size is still kind of a sticking point for me with this figure. He towers over so many of the Titans Return figures, which is certainly in keeping with the wonky scale of the 80’s toy-line, but it feels out of place here. And yet, ironically, he’s still actually a little bit shorter than the original G1 Blaster. It’s something that I can get over because he’s such a great toy, but that leads me to another problem with him. Now that I have him, I’m going to have to pick up Titans Return Soundwave, which I hadn’t planned on doing. Unfortunately, the appeal of finally having a Soundwave and Blaster that can go head to head with each other is just too irresistible. It also means that I’m probably going to pick up more of the data slugs, even though I know their crap. Damn you, Blaster, you were just a trap to get me to spend more money!