Since I detoured last week and I’m now officially three waves of Marvel Legends behind, I’ve decided to pack the next three weeks worth of Legends reviews into one sitting and knock out the rest of the Titus Wave today. I’ve got two packaged figures left and the Build-A-Figure, so in the interest of brevity I’m just going to throw out a few thoughts on each figure and otherwise let the pictures do the talking.

I really hate throwing multiple figures into one review, because it craps all over my nuanced flow. Anyway, the packaging is all more or less the same, so I’m only showing off Nova in the box in order to keep today’s triathlon as brief as possible. Do you think they branded Nova big enough? Anybody going to miss that? No? Didn’t think so. Keep in mind, that this is Sam Alexander, as opposed to Richard Rider, who we got a few years back in the first Guardians of the Galaxy wave! Sam’s was a fun and pretty well received book, so I think this figure was probably high on a lot of people’s lists. 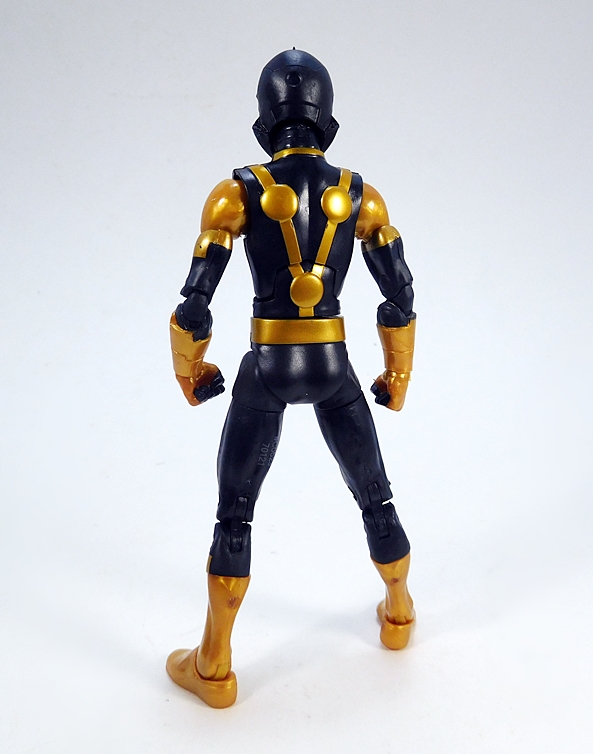 Nova is appropriately built on a smaller, teen buck and it makes all the difference in creating a distinctive new member of the Nova Corps for my display. There’s also a surprising amount of new sculpting on this figure. The gold boots are simply painted on, but you get new sculpting in the gauntlets and torso. The dark blue and gold deco of the Nova Corps is always a favorite of mine and I’m in love with the gold paint they used here. It’s very shiny and consistent. I also really dig the head sculpt, although the plastic used for that famous helmet looks a little rough in a few areas. 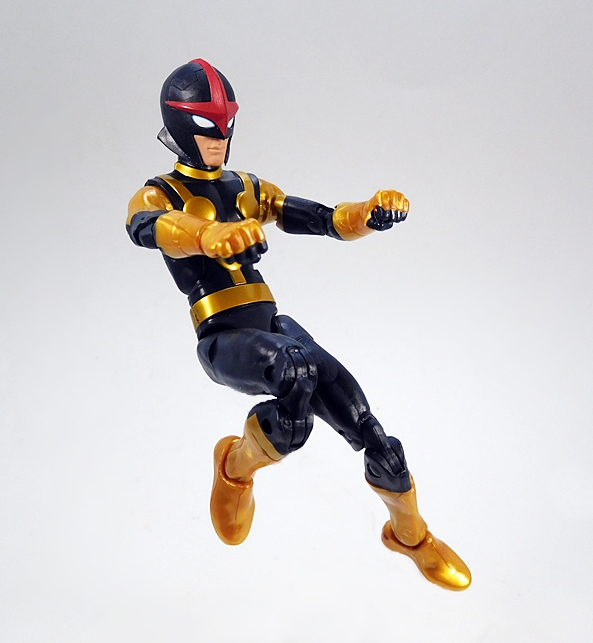 Nova’s articulation is pretty damn good, especially for a little guy. The arms feature rotating hinges in the shoulders and hips, double hinges in the elbows, and swivels in the biceps. The legs have ball jointed hips, double hinges in the knees, and swivels at the tops of the boots and again up in the thighs. The ankles have hinges and lateral rockers. The torso includes a waist swivel and an ab crunch, and the neck is both ball jointed and hinged. This is a great looking figure and does the character proud.

I would be remiss if I didn’t acknowledge that Nova comes with a tiny Phlish figure. I really have to give Hasbro props for adding something like this, but seriously, what am I supposed to do with it? It just lies there waiting to be lost. Sorry, Phlish, but I’d much rather Nova just came with The Nullifier instead. Next up… Vance Astro! 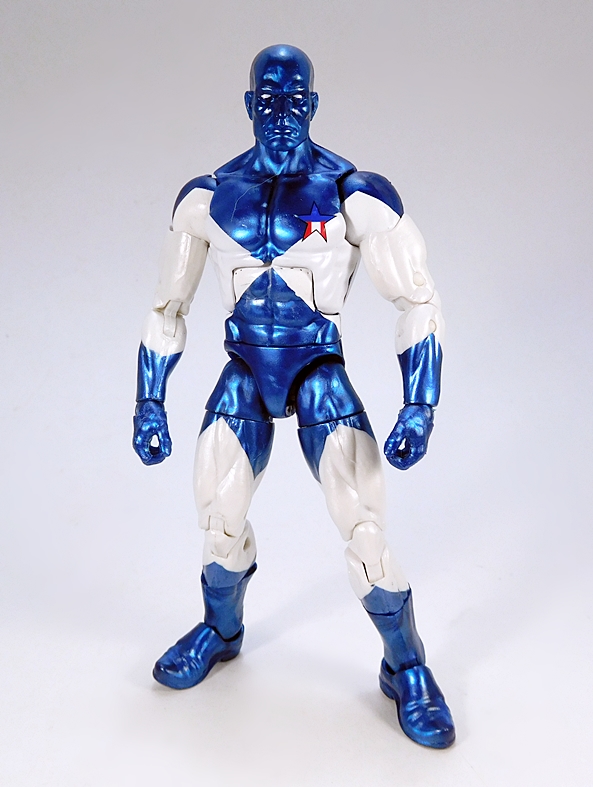 I last encountered Major Victory in Fight for the Future, part of the double-sized Guardians 45th Anniversary issue. Wow, has it been three years already? Vance and his team of Guardians rescued Geena Drake from a slave camp. He made quite the entrance, with Cap’s coveted shield preceding him by at least a couple of panels. But ultimately it felt like a glorified a cameo. Why are we getting this figure now? Who cares, he’s a character with a far reaching pedigree and he’s pretty cool too! 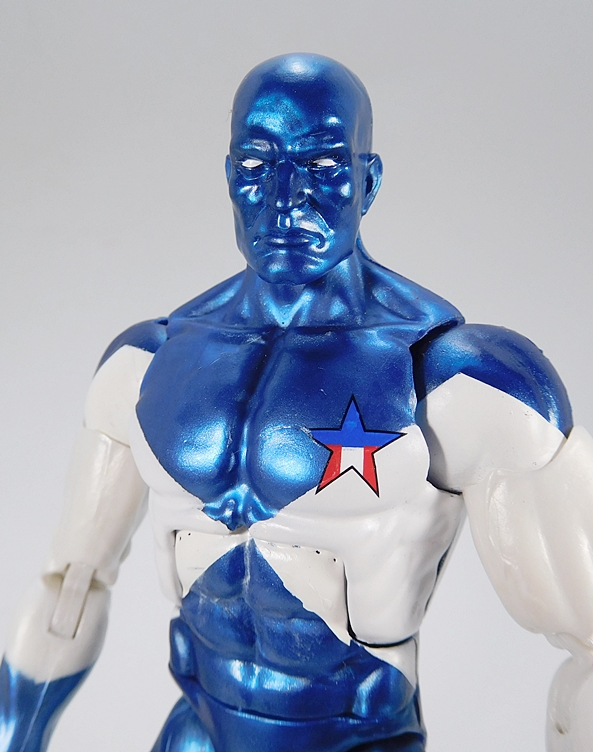 Yes, he’s definitely the “budget saver” of this wave, as there’s zero original sculpting from the neck down. That said, his deco looks sharp, particularly that snazzy metallic blue. The paint lines are pretty clean and he has his little crest tampo’ed on the left of his chest. The head sculpt looks damn cool with that shiny blue finish. Articulation is your standard Legends fare, which I just recounted with Nova, so in interest of brevity I’m not going to run through it all again. 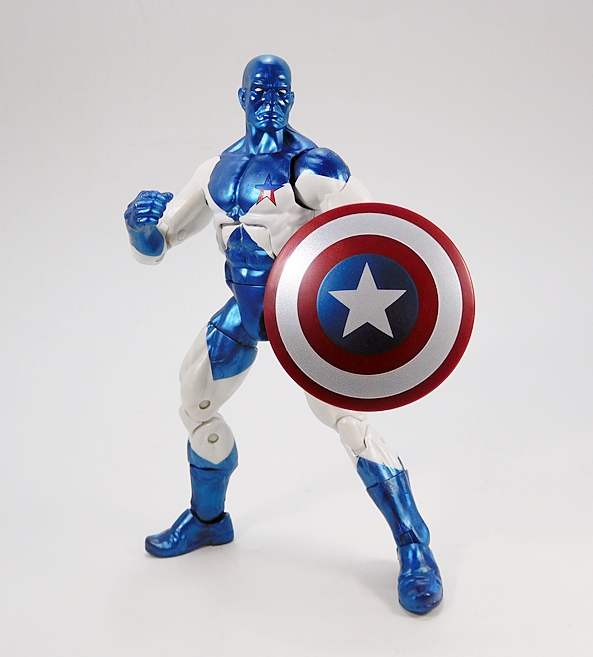 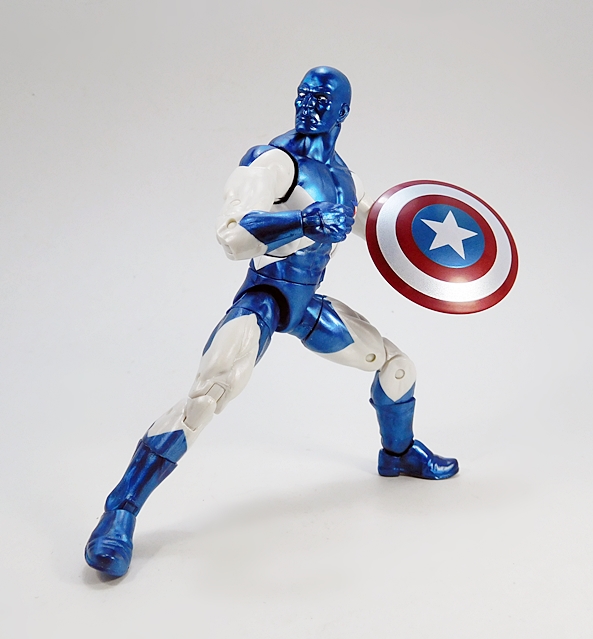 Appropriately enough, Vance comes with Cap’s shield, which is recycled from one of the countless versions of Legends Captain America that we’ve seen over the past few years alone. It has a red back and features the familiar wrist clip with a peg to store the shield on his back. My guess is that Vance isn’t going to be high on a lot of collectors’ lists, but I’m happy to have him. And that brings us to the BAF of the wave… Titus! 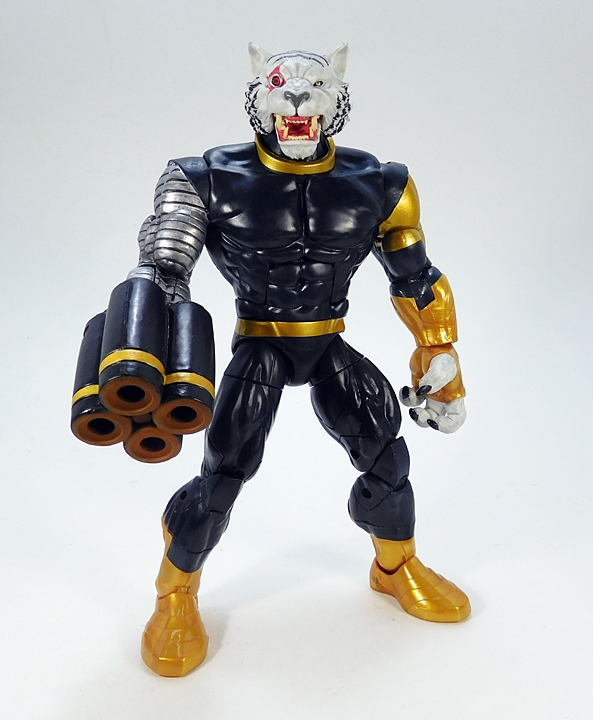 Like Vance, Titus may not have been high on a lot of people’s lists either, but unlike Vance, Titus is a pretty new character, and a short lived one at that. Or wait… didn’t he come back shortly after? Either way, none of that makes him any less welcome to me. No sir. Why? Because he’s a giant space tiger with a cyborg eye and a gun arm for Chrissakes! If you haven’t been keeping track, Titus is built with six parts scattered throughout this wave (Don’t forget, Star-Lord didn’t come with one!), making him a pretty standard BAF. As a former Special Ops of the Nova Corps, his buck features the very attractive dark blue and gold deco, but lacking the Nova symbol on his chest. He’s got a sculpted robot right arm, which looks very Colossus-y and leads into a massive four barrel instrument of death. His other arm is punctuated by a grasping tiger claw. 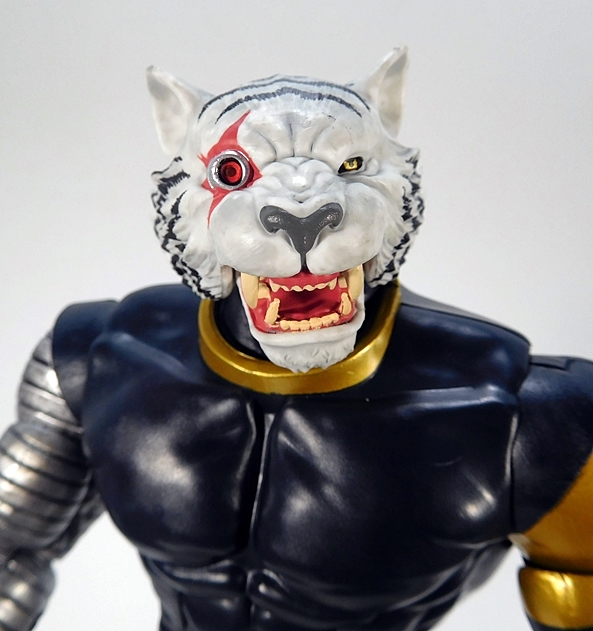 This head sculpt! I have to tell you, this is a thing of beauty. Besides all the great sculpted fur and that partially agape jaw, and those teeth, I think it’s the angry wrinkling in his nose that impresses me the most here. The cyborg eye is pretty cool too. When you set out to sculpt the portrait for an alien tiger cyborg, it’s pretty much guaranteed to have some personality, but Hasbro really went above and beyond here. I love it.

And articulation is what we’ve come to expect from most of the BAF figures. It’s actually quite similar to what we saw with Nova and Major Victory. The only real differences are single hinges in the elbows and Titus doesn’t have the extra swivel in the lower legs. Still, not bad at all for a big guy! 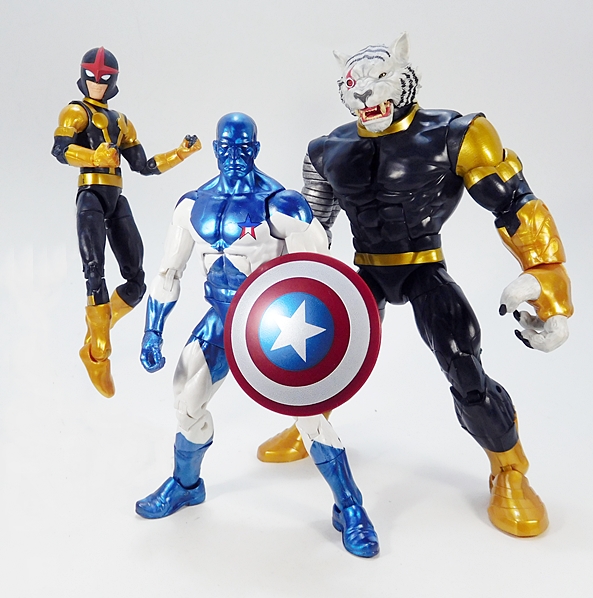 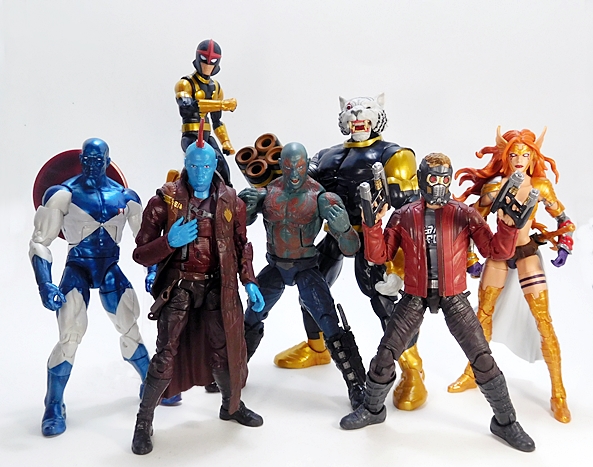 And that’s a wrap for the Titus Wave, another very solid assortment of figures and I really dig that Hasbro broke the Guardians Vol 2 wave into two so we could get more comic based characters. I haven’t decided yet whether I’ll be jumping into the Mantis or Warlock Waves next, but before I go with either of those, next Marvel Monday will be another Trifecta of Legends reviews (I promise, this isn’t going to be a regular thing) as I address some unfinished business with a fairly old wave of figures.