It’s no secret that Forever Evil and Injustice League constitute a comic arc that is saturated with bad guys. Much of it reads like a who’s who of DC Super-Villains. And yet there are two characters in that weighty roster of scumbags that stand out as being truly horrible people. Yup, they would be Johnny Quick and Atomica. Holy shit did this pair feature in some great panels and some of their antics made the rest of the Crime Syndicate look like boy scouts by comparison. DC Collectibles released the entire New 52 Crime Syndicate as part of their Super-Villains line. A few weeks back, I had a look at Deathstorm and today I’m checking out this pair.

Johnny comes in the same type of window box that DCC has been using for all their New 52 figures, although they have been going with a black deco for the Super-Villains line accompanied by a splash of color themed for the character within. It’s collector friendly and shows the figure off well. So well, that I could see I had a problem as soon as I got him out of the shipping box. Apparently, there have been issues with the paint on Johnny’s vest fading and that’s certainly what happened here. I considered sending him back, but he was really cheap so let’s press on…

Here he is out of the box and faded chest paint aside, I love almost everything about this figure. What I didn’t love is that his left foot fell off right out of the tray and I had to glue it back on. Sheesh… the plastic gods are not smiling on me today. Anyway, the costume has a delightfully cheesy, retro flavor to it that contrasts beautifully with the fact that Quick is such an evil bastard. I get a strong Super Sentai vibe off of this design and I really love it.

There’s some wonderful attention to detail in the sculpted suit, which includes ribbing on what I presume is the exposed body suit, and lots of jagged, lightning-like edges on the armor and gauntlets. The brilliant metallic paint looks fantastic… except on his vest where it has faded. Yeah, that vest issue really sucks. It’s obviously  supposed to match the rest of his costume, but it’s gone so pale that it looks like another color paint entirely. At first, I thought it was sun fading, but it’s like that on the front and back. This is apparently a problem with this figure, as I’ve seen a handful of other reports from collectors with similar issues. It almost looks like it’s painted that way by design, but I know better. Anyway, the rest of the paint is pretty good, and I like the mustard tone they used for the glove, boots, and trim.

The head sculpt here is great. While Quick was certainly a shit-bag in the comic, he had fun being one, so I would have liked to see a smirk or something, but I guess the determined expression works for me. The large bug-eyes and the back swept helmet are also pretty cool. Again, if the face was painted to match the helmet, this guy would look like he jumped right out of a Super Sentai show. I’m ready to move on to discuss his articulation, but before I do, both shoulders are stuck, so pardon me while I boil some water.

Ok, so that fixed the right shoulder up great. The left shoulder is still a little sticky, but we’ll press on. One of the most surprising things about this figure is how great the articulation is. The arms have rotating hinges in the shoulders and wrists, swivels in the biceps, and hinged elbows. The legs are ball jointed at the hips, have swivels in the thighs, and double hinges in the knees. The ankles have hinges and swivels, but in my case that now includes only the right ankle since the left foot is now glued on. There’s a swivel in the waist, an ab crunch in the torso, and the neck is ball jointed. And… OH FOR F’CK’S SAKE!!!

And then that happened. So, suffice it to say… this figure is cursed. From a bad paint job to two joint issues, he’s just a mess and I’m really disappointed. I love the design of this guy, I loved to hate him in the comic, and now I can’t even enjoy him on my shelf. Let’s bag it and just move on to Atomica.

Yes, Johnny also comes with his tiny girlfriend, Atomica. She’s a character that played a pretty big part in the New 52 Justice League and she’s had an appropriate amount of love from DC Collectibles. She last graced the pages of FZZ as a DC Icons figure and a damn good one at that. Of course, this one is a simple static piece, but very well sculpted and painted for such a tiny gal. They even sculpted her itty bitty goggles down around her neck. And I don’t have to worry about any of her limbs falling off because she doesn’t have any joints. She does come permanently attached to a clear disc base. 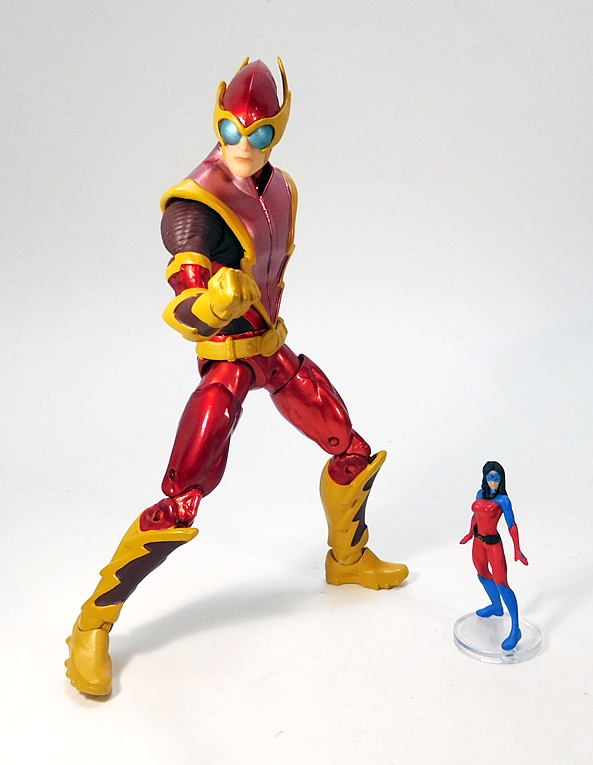 Well, needless to say this DC Friday didn’t go as planned. The only good news is I picked up Johnny Quick on clearance, so he was dirt cheap and I’m not out that much money. The bad news is, I love this figure so much, I’m considering trying my luck a second time. I know, it’s rewarding bad QC and it’s potentially throwing good money after bad, but I really want this figure on my shelf. 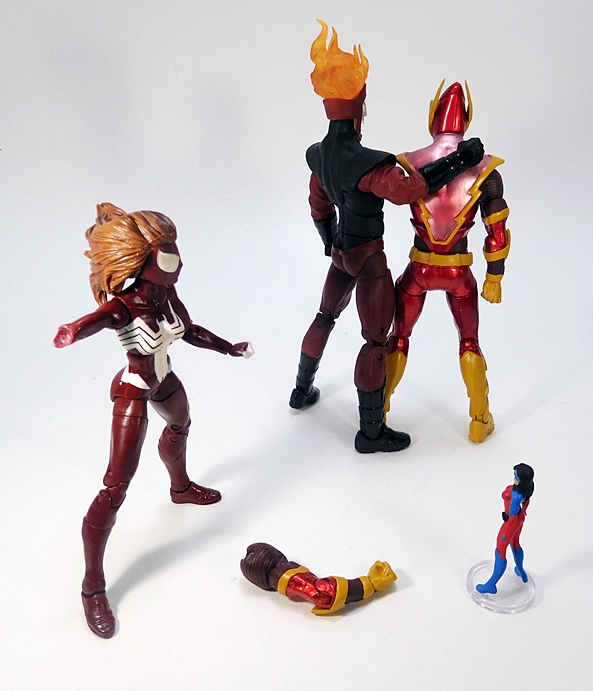 S-W: “I know I should be more sympathetic, but he’s kind of a dick.”