I know, it’s been forever since I’ve done a proper Anime Saturday update. Well, time has been tight, but this week I was on vacation, so I had no excuses. Indeed, and to make up for it, I pushed my way through all the prize figures that have been piling up and went straight for a Figma. And since I’m going through some major KanColle withdrawal, I’ve decided to go with Secretary Ship Nagato from Kantai Collection. I have looked at a couple KanColle FigFix figures, but this is my first full blown Figma from their Kantai Collection line up. 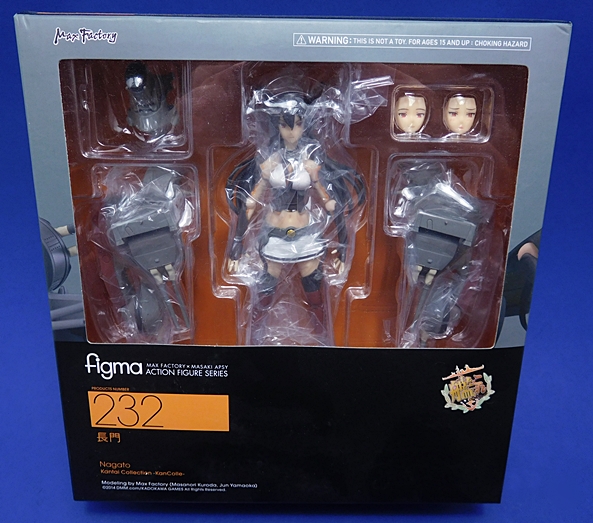 Nagato comes in a traditional Figma window box. This is the larger style box to accommodate her armament rig. It’s rather bland when compared to some of the other Figma packages lined up on my shelf, but I guess it sort of suits the cold gray color of naval hardware. The window offers a decent view of what’s in the box, with all the pieces and the figure each wrapped in plastic. This is figure #232, which is really meaningless to me because I’m damn sure not a completist when it comes to Figmas, rather I just cherry pick the franchises that I enjoy. The box is collector friendly and I do hang on to my Figma boxes in order to have somewhere to keep all the goodies inside. 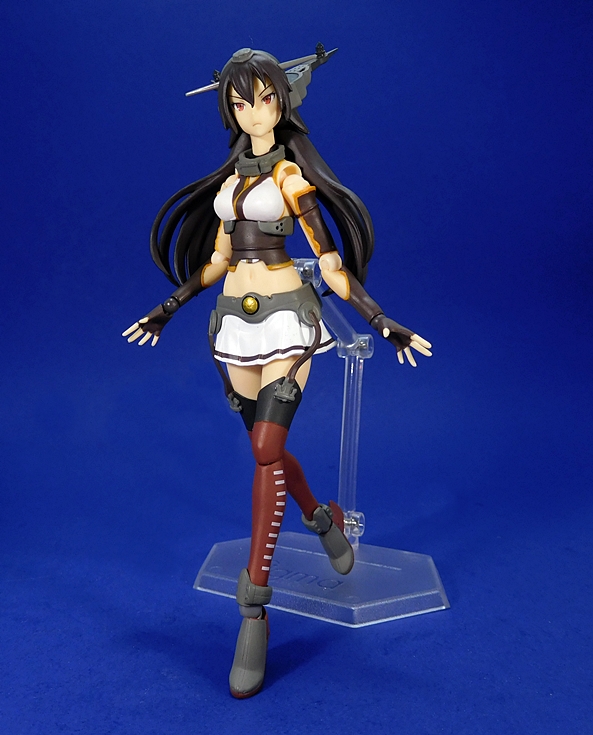 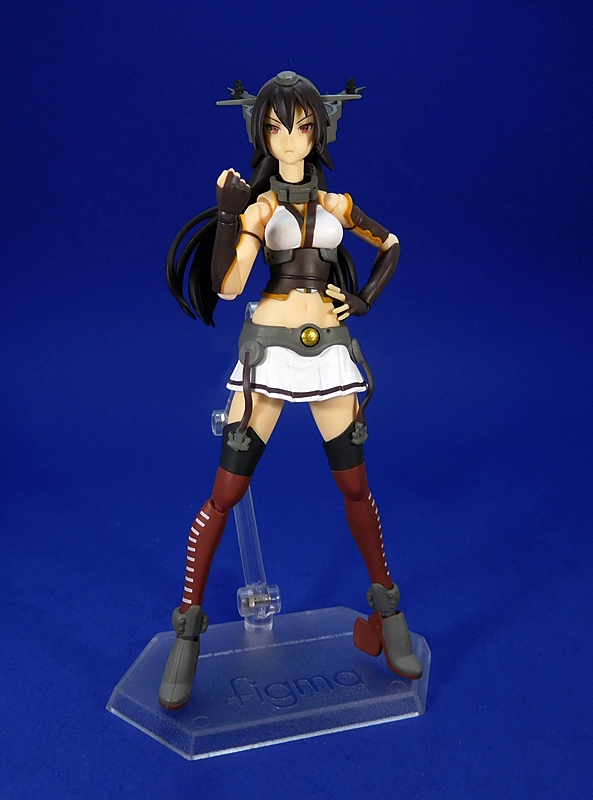 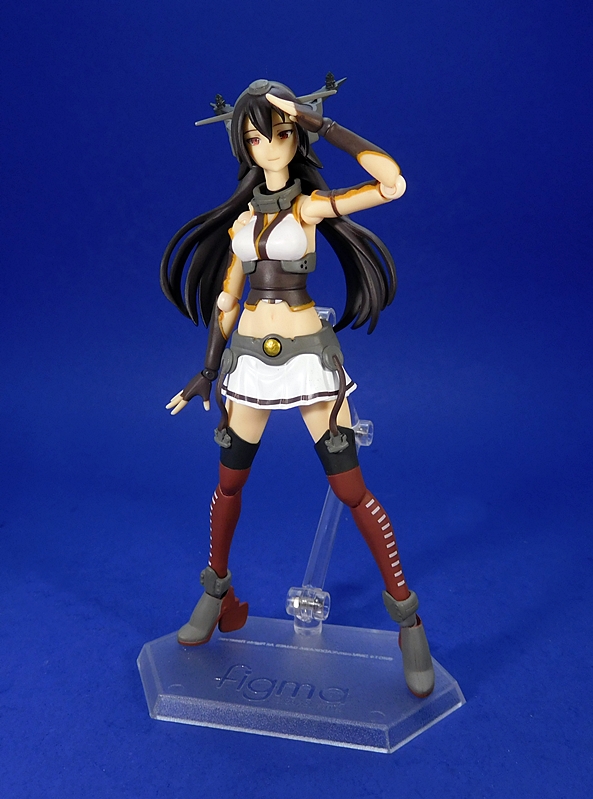 Here’s Nagato without all her guns, which is the way she spent most of the anime series before sailing out to kick some major ass for the finale. The Secretary ships, Nagato and Mutsu are among my favorite Fleet Girls and just looking at this figure reminds me why. Nagato is elegant, stately, and her drive and determination all conspire to make her just so damn sexy. The outfit doesn’t hurt either. She sports a cut-off top with some reinforced armor pieces and an exposed mid-riff (sending some mixed messages there, Nagato!), as well as a short, pleated skirt. Her black and maroon stockings, held up by adorable little anchor themed straps, have the white hash marks down the sides. The outfit is rounded out with her little rudder boots. The paint here is all smooth and clean and I got absolutely zero complaints about this gal. 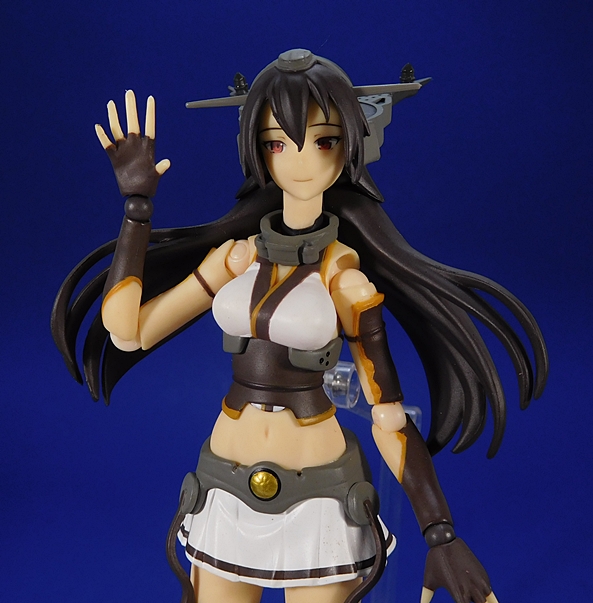 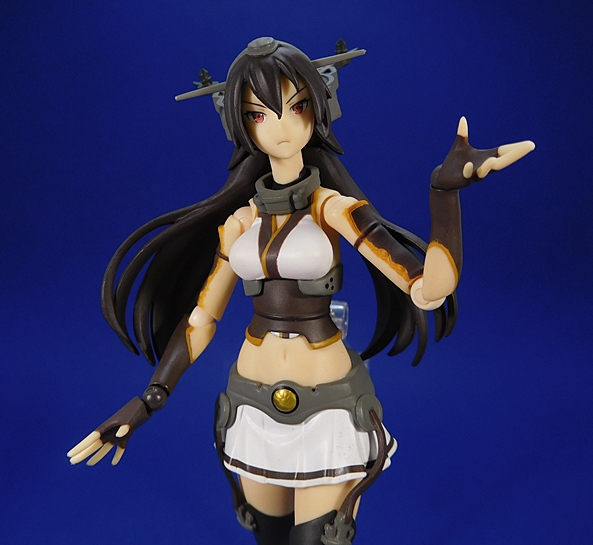 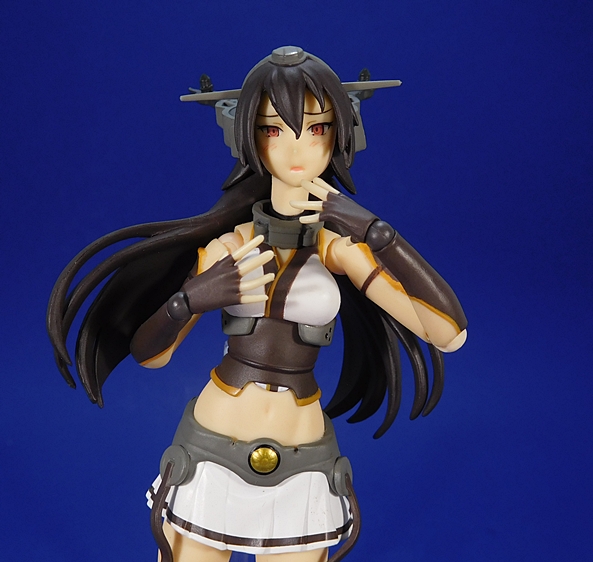 Of course, Nagato comes with an array of extra faces and hands. The hands include a pair of relaxed hands, a pair of hands with the fingers together, a pair of gripping hands, and a pair of fists. As for the faces, the variations are very subtle, but include a happy face, a determined face, and an embarrassed face. Granted, this is probably a greater range of emotion than Nagato showed in the entire run of the anime series. She was all business, and spent most of her time planning strategies in the command room. 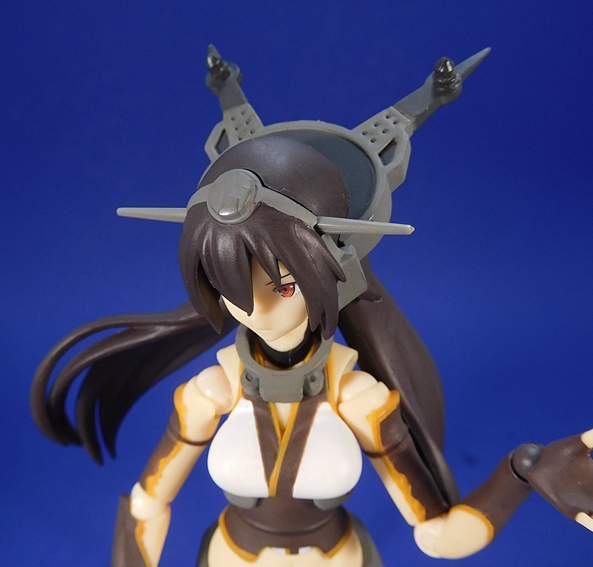 No matter which face you choose, Nagato has her very distinctive looking antenna angling out behind her head and jutting out from the sides. Also, her long hair is parted in the middle down the back and attached with ball joints. And now that we’ve seen everything about the basic figure… let’s gear her up! 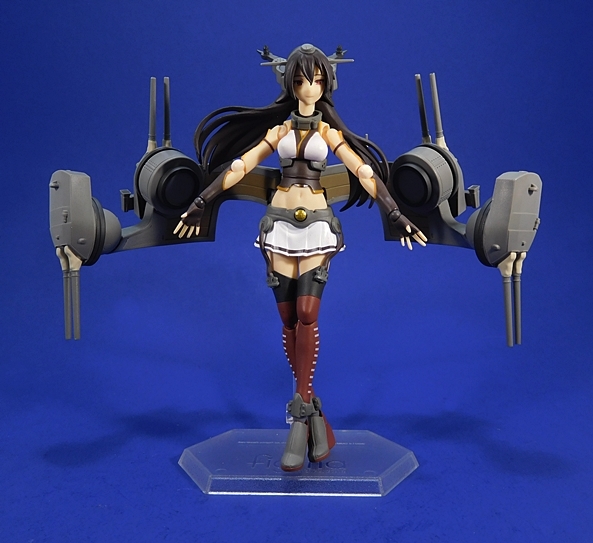 Nagato comes with her iconic 41cm Twin Gun Mount, which plugs right into her back and makes her a force to be reckoned with! Each half of the rig is hinged on her back and can be closed in around her. The rear gun emplacements swivel and each barrel can elevate independently. The forward emplacements are on rotating hinges, so the entire assembly can lower and elevate as well as swivel, plus each barrel can also elevate independently. The sculpt on the rig is fairly simple, but it does feature some panel lines and sculpted rivets. The bulk of the piece is cast in battleship gray plastic with some red accents and a tan plastic used for the bases of the barrels. 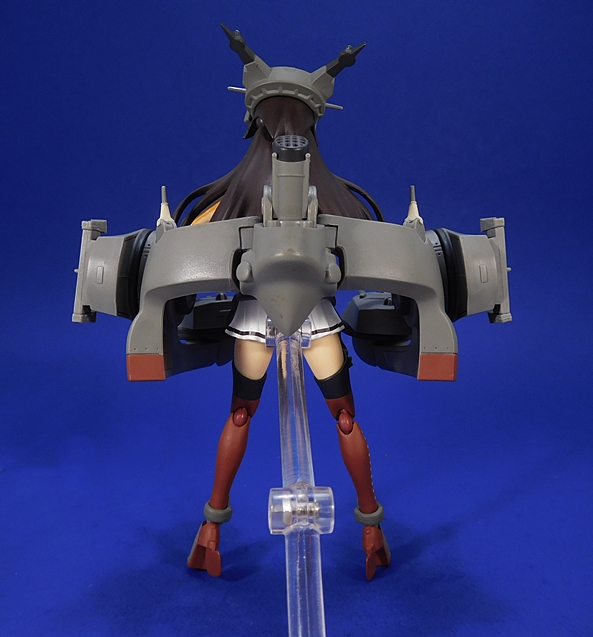 The back of the rig features the two little AA guns and the smokestack rising up from the middle. 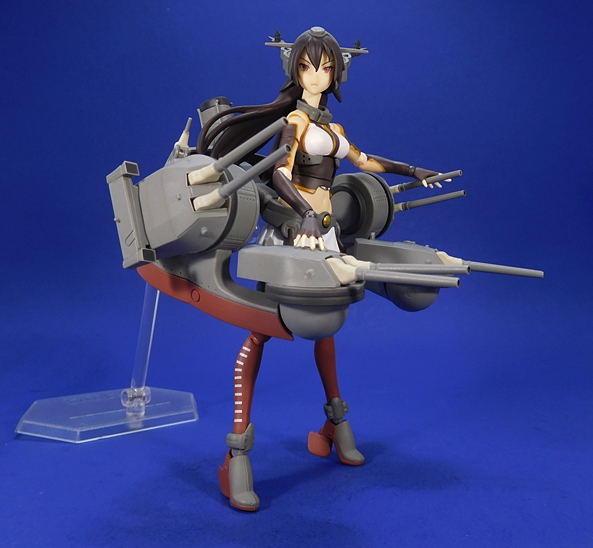 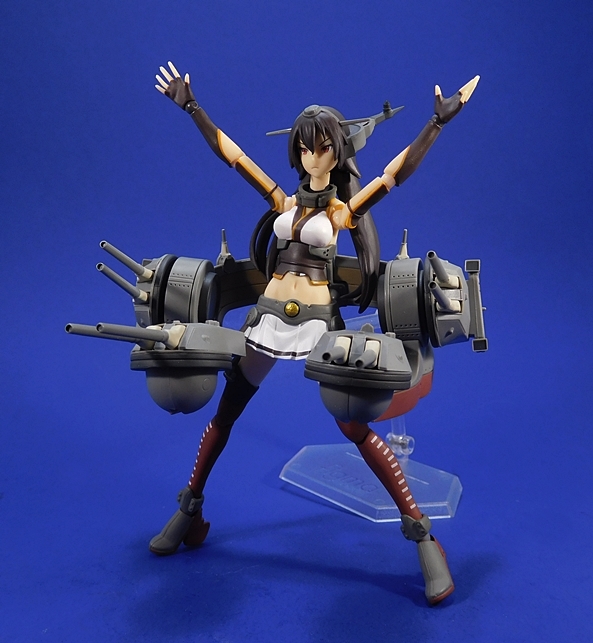 Obviously this beast of an rig makes Nagato a little back heavy. It does displace the weight fairly well, I have been able to get her to stand freely with it on, but for the most part, this is where the Figma stand can happily take over. 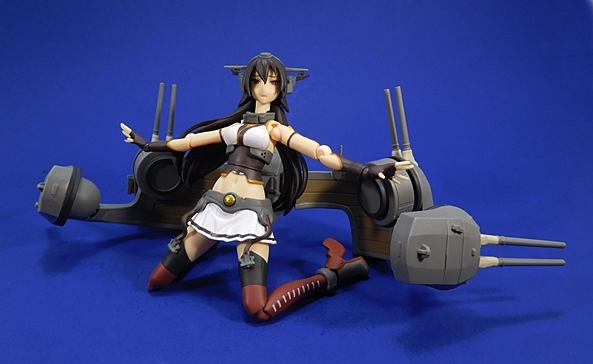 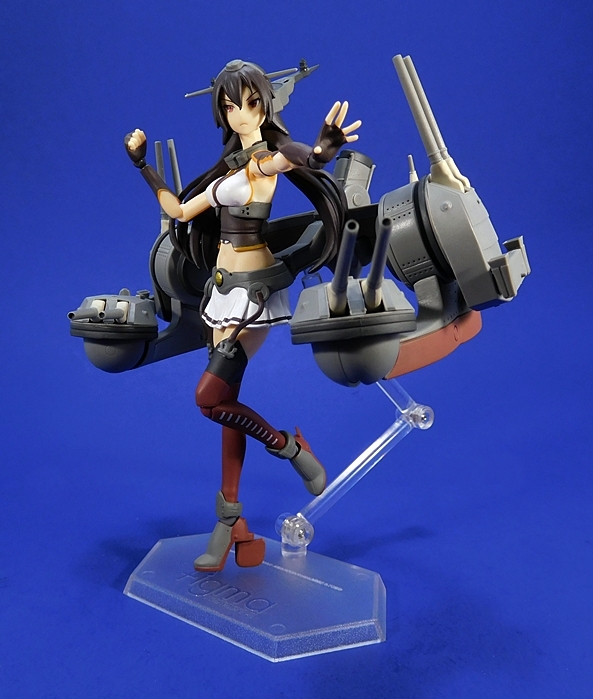 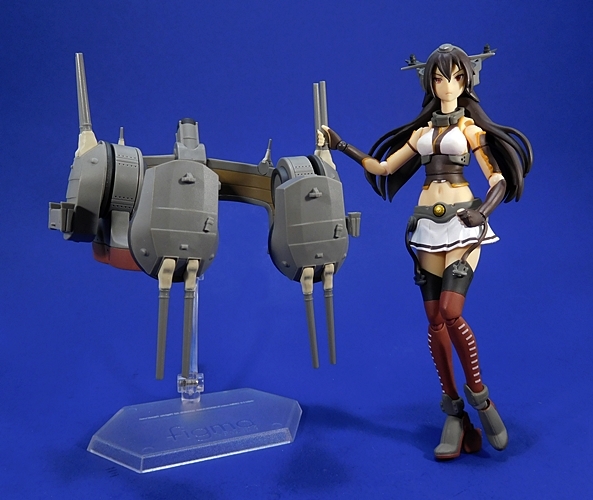 I’ve had my eye on Nagato for a long time and came close to paying some pretty ridiculous prices for her. In the end, I was able to bag her for around $65 and I’m pretty comfortable with that price, especially since most Figmas go up for pre-order in that price range, no matter how simple they are. Nagato is a beautiful figure on her own, but her gun mount goes a long way to justify the price. Granted, she doesn’t have the wow factor of my mammoth Super-Premium Nagato by SEGA, but then this one is actually articulated, which makes her a whole lot more fun.