Once again, folks, DC Friday is being preempted so that I can get to some Playmobil Ghostbusters goodness. Sorry about that, but rest assured, it will return next week when I get back into checking out some DC statues. And now… on with today’s content…

There’s something about getting a playset in a big box that still feels like something special. Maybe it’s because it reminds me of the magic of being a little kid at Christmas, or maybe it’s because so few of these things are made anymore that it’s become a rare occurrence. Either way, I knew after only a few moments after getting Playmobil’s Ecto-1 set up that I would need to get the Firehouse to house it in. Well, it arrived earlier this week and I’ve had some time to play around with it. If this set had come out anywhere near December, I probably would have held off opening it until Christmas, but that’s still a ways off, so I’m diving in right away!

In typical Playmobil fashion, the illustrations and photos on the box let’s the product do the talking. Sure there are some digital effects, but for the most part what you see on the box is what you’re actually getting inside. Also, the box is huge, although it’s not terribly deep, so right off the bat you just know there’s going to be a lot of assembly here. You can also tell that from rattling the box or by looking at where it proclaims that there are 228 pieces inside! 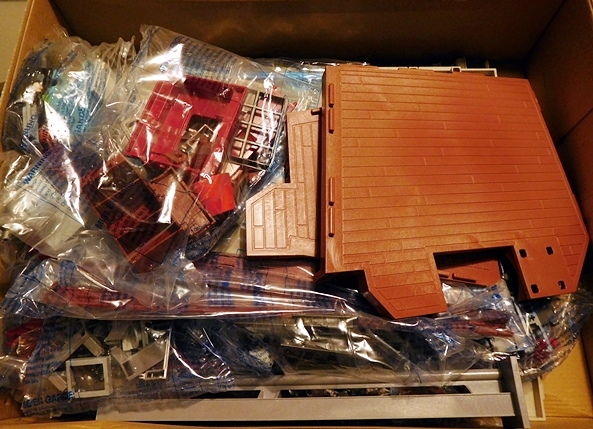 Open her up and you’re presented with more than ten bags of pieces, plus a bunch of loose bigger pieces, and a bag with instructions, some rubbery splotches of green slime, and a sticker sheet. I knew right away it was time to brew up a pot of coffee and tuck in for a fairly lengthy build. Granted, a fair number of those 228 pieces include the figures, equipment, and furnishings, but even putting together the structure itself was more involved than I was expecting, and I’m no stranger to Playmobil! I should throw out a warning, that while it’s probably possible to disassemble the Firehouse and get it back in the box, it’s not something I’m willing to risk, which means somehow I’m going to have to find the shelf space for this beast! 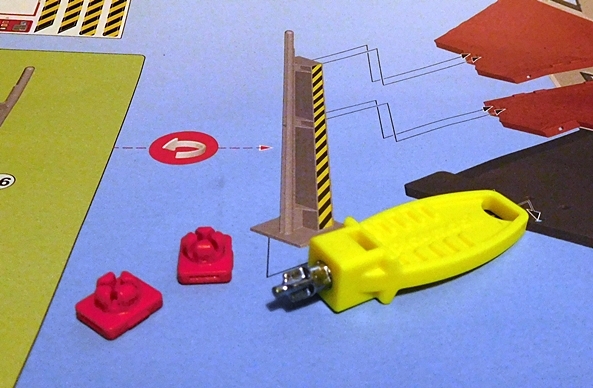 The instructions are pretty good, although the bags aren’t numbered like LEGO sets, so while you may be finding most of the pieces in a step in one bag, some might be in another. As a result, I played it fast and loose with the steps, and I still did OK. A lot of putting together the actual building involved these red square joining pieces and this Playmobil tool. I’ve had Playmobil sets ever since I was a kid, and I’ve never even seen one of these before! The worst thing about the entire build was putting together the two staircases. Each step had to be individually inserted (something like sixteen in all!) and it took a ridiculous amount of force to get them together. Also, the tool didn’t help with it and my thumbs were almost destroyed by the time I was done. Let’s start with a look at the figures that are included, then a look at the Firehouse itself, and then I’ll go floor-by-floor to look at the furnishings and accessories. 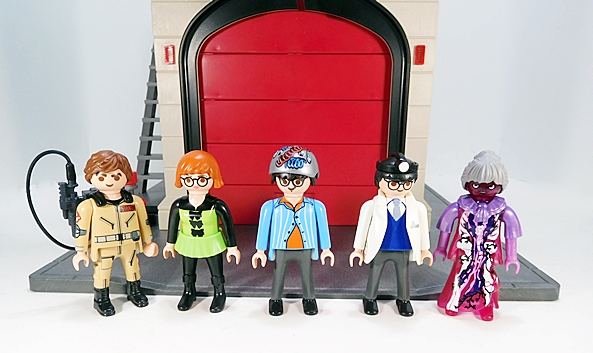 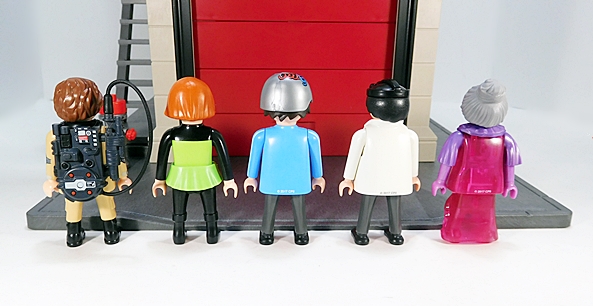 The set comes with a whopping five figures! These include Ray Stantz in a clean uniform, Janine Melnitz in her civvies, Louis Tulley with the brain scanner/kitchen colander on his head, Egon Spengler in his “doing science” outfit and forehead spotlight, and the Library Ghost from the beginning of the movie. I’d say all of these are excellent, except the Library Ghost just doesn’t do much for me. It’s neat to have another ghost, but this was probably a tough design to translate to the Playmobil aesthetic. The clean suited Ray comes with a Proton Pack, Ghost Trap, PKE Meter, and a weird looking device that I don’t recognize. The inclusion of this figure also means that Playmobil has to release at least one more set with a clean suited Peter Venkman… THEY HAVE TO!!! As for Janine, Louis, and Egon, they’re all very Firehouse specific, so it’s great that Playmobil included them here. Seeing as how the figure two-packs can range up to $10 at retail, I think these figures add a lot of value to this package. 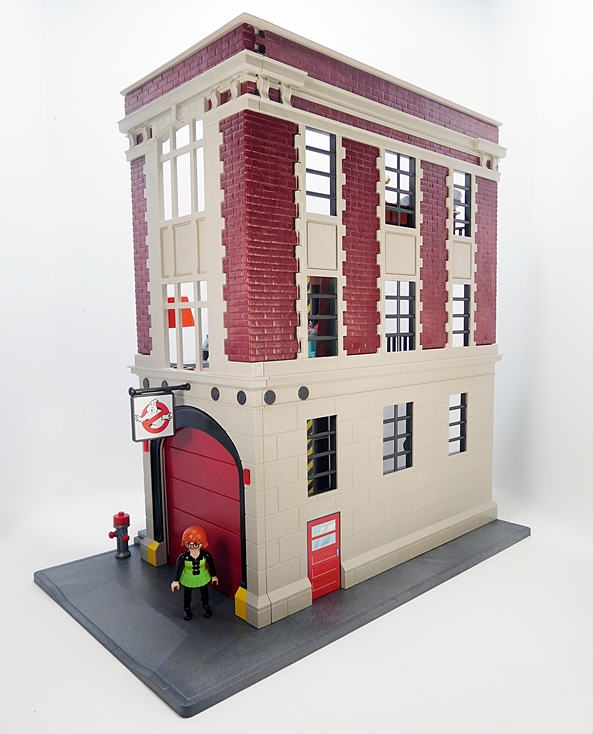 Here’s the exterior of the Firehouse and I think it’s a damn fine approximation of the building from the film. All of those windows and all of the brickwork are part of the assembly process. I think the only thing here that’s a bit of a letdown is the door on the side is just a sticker and it’s scaled a little too small. Then again, this is a Playmobil set designed for kids, so I’m probably being way too critical! There’s a fire hydrant beside the building and you get the iconic Ghostbusters logo on the sign above the garage door.

The garage door opens and building those tracks for it to do that is fairly involved. Moving inside, you can see that there are three levels, each accessible by those damn stairs! Seriously, my poor thumbs are still hurting from snapping all of those together! I’m going to start at the top and work down. Keep in mind, you really are free to deck this thing out any way you want, I just followed (more or less) the suggestions on the box. 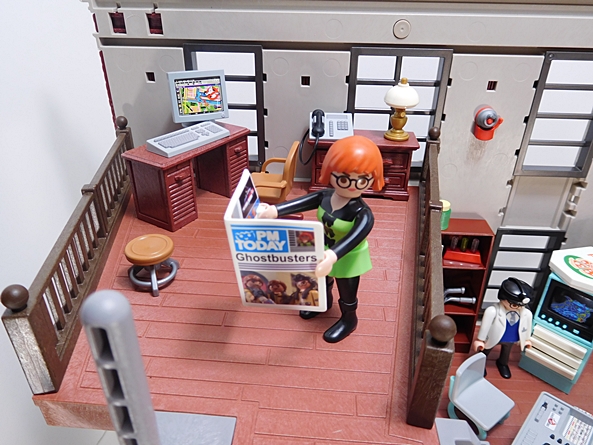 So the top floor is Janine’s office. She’s got a desk with a computer and keyboard, a second piece of furniture with a phone and a lamp, an office chair and a stool. The drawers on that other piece of furniture actually open and you can put little Playmobil stuff in them. The monitor shows a map of the city with a Ghostbusters emblem indicating ghost activity. She also comes with an issue of Playmobil Today featuring stories about the Ghostbusters and their equipment. You can also see the fire alarm just to the side of the banister. “WE GOT ONE!!!” 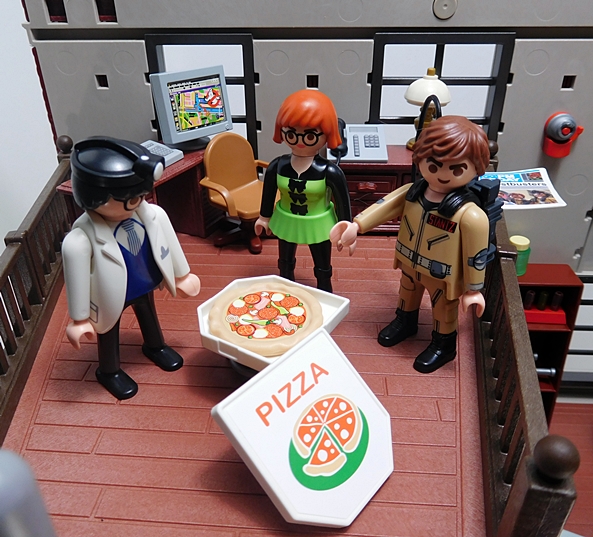 You also get a pizza in a box! What? No Chinese Take Out??? 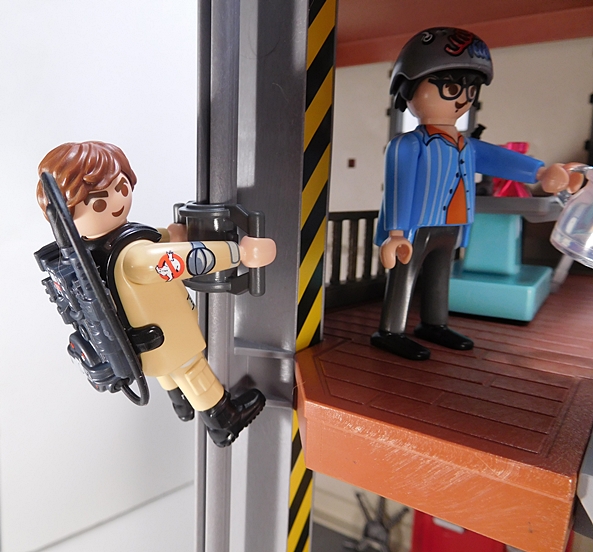 There’s a fire poll that connects all the floors and a sliding hand grip for the figures to slide down on. 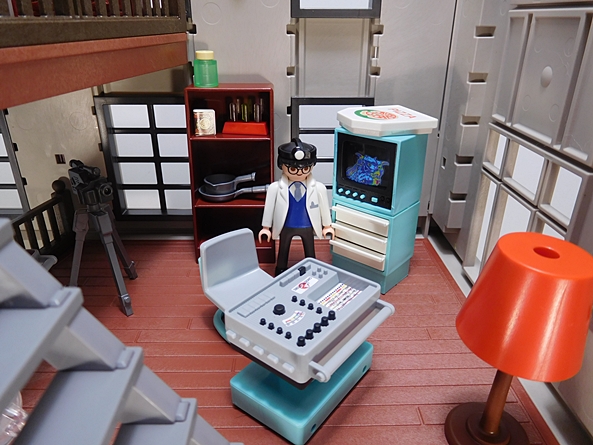 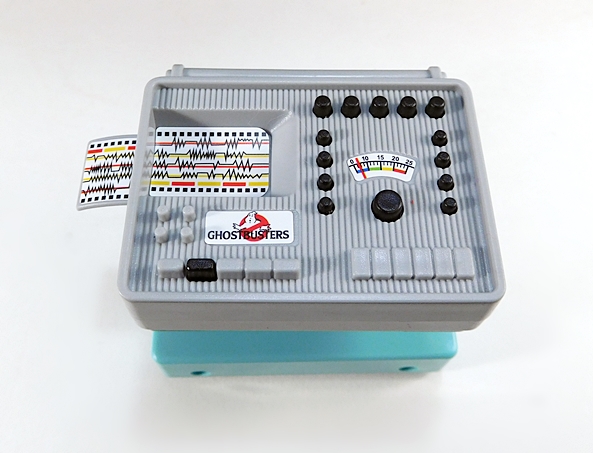 The middle section is the lab area, which houses all the scientific equipment. You get the device that they hooked Louis up to with a screen that shows an image of a Terror Dog, indicating that he’s possessed. The equipment itself has all sorts of buttons and gauges and it’s even branded with the Ghostbusters logo. It includes a chair and the monitor sits on a cabinet with three opening drawers. Here you can also see a floor lamp, and a video camera on a tripod.

A closer look at the bookcase in the background shows it contains a couple of cooking pans, a test tube rack with three test tubes, a jar of green slime, and a copy of Tobin’s Spirit Guide! 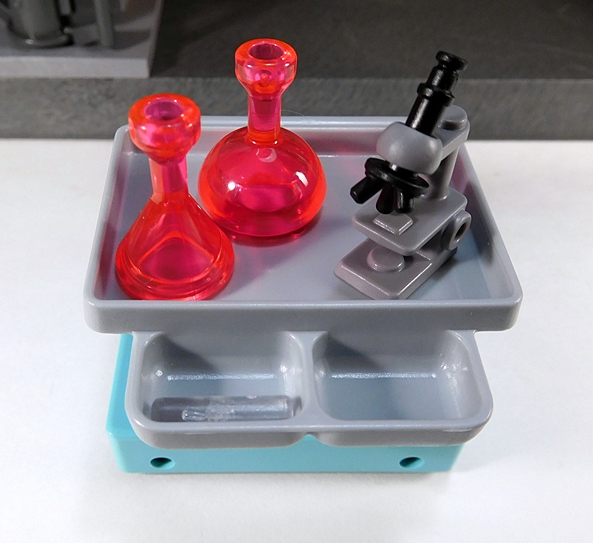 You also get this rolling cart with a few scientific flasks, a microscope, and a stray test tube. SCIENCE!

And there’s a coffee decanter for Louis to hold. “YES HAVE SOME!” I’m really impressed with all the great stuff they packed into the science area and I’m already on the hunt for some other Playmobil sets that might allow me to expand it even more.

Moving into the garage level, there isn’t a whole lot going on down here, but you do get the containment system, which opens up and you can put a trap in there. If you’re like me and you have most of these sets then you’ve got a lot of Ghost Traps by now, which gives me a spare to keep in the unit. The detail on this thing is mostly stickers, but it looks great. It has a couple of handles, one to open the door and one to flush the machine. I really dig the hoses coming up out of the top.

Of course, the reason there isn’t a whole lot else going on in the garage is because they had to leave room for the Ecto-1 to fit, and it does indeed fit… granted just barely, but I’m not complaining, because it looks great in there and it’s one of the biggest selling points about this whole set.

Now, obviously all this playset don’t come cheap. I was able to get mine for regular retail price off of Amazon for $69.99. Right now it’s selling for a little more than that and without the free Prime shipping. When you break down everything that comes in this box, I think the asking price is fair, especially since it’s the exact same price that Playmobil charges for their largest Pirate Ship sets, which are obviously not licensed. My point is, you aren’t getting soaked just because it’s an official Ghostbusters product, and you get a lot of goodies in the box for your money. I’ll be honest, I probably would have ponied up more money if I had to, because I never in a million years would have guessed that we’d get an actual Ghostbusters Firehouse playset like this ever again. The fact that it’s from Playmobil is both bizarre and fantastic at the same time. I have only one set left to pick up, the Hot Dog Stand with Slimer, and I’m going to nab it as soon as I find it. I’m still going to hope we see some more sets out of the Playmobil-Ghostbusters fusion, but my gut tells me this may be it, and if that’s the case, well… Playmobil certainly gave it their all and did a fantastisc job.