After a brief detour, I’m steering the good ship, Marvel Monday, back to Marvel Legends. These things are piling up around me like crazy and I’m beginning to think running a whole week of Legends is going to be necessary if I’m ever getting caught up. Maybe I’ll do that for the next wave, for now I think I’m going to double up on the shared slots, which means I’ll have a second review going up this evening. In the meantime, I decided to go for the second Guardians Vol.2 wave and I’m kicking it off with Ex Nihilo, straight from The Garden on Mars!

Of course, Marvel split this assortment into two waves so that they could include some comic-based figures along with the MCU Guardians. Call me crazy, but I was quite pleased to see Ex Nihilo revealed in this wave, as I am a big fan of Hickman’s run leading up to the Avengers: Infinity story arc in general and Ex Nihilo and Abyss were some interesting additions to the Marvel roster. Indeed, if anything about the news of this release disappointed me it was that there wasn’t an Abyss figure included in the wave as well. Hell, a Ex Nihilo, Abyss and Aleph three-pack would have been sweet. Anywho… Ex Nihilo shares a slot with Adam Warlock as the “Cosmic Protectors,” which is a pretty unlikely title for him at his introduction, as he was kind of a prick in the beginning, but he came around in the end.

No doubt, Ex Nihilo is a distinctive looking fellow, so much so that it’s hard to believe that he could be considered one of the budget figures of the wave. And yet, he makes use of a standard buck with just a new head sculpt. I’m sure I’ve seen those hands before, although I’ll concede that the bare feet are probably new. The only paint on the body is the Omega-like emblem printed on his chest.

The gold colored plastic looks pretty good, but not quite as good as the original promotional pictures. The final figure isn’t quite as vibrant and there’s some of that annoying swirly pattern evident here and there. So, yeah… it didn’t turn out quite as nice as the teasers, but he’s not bad at all. Under the right lighting the gold is very pleasing on the eye.

The head sculpt depicts Ex Nihilo with a toothy grimace. I think this was actually a good expression to go with, since the figure is pushing him not as a mysterious threat dropping Origin Bombs on the Earth, but as someone who eventually allied with The Avengers against The Builders. Either way, I think the sculpt is excellent, the teeth are exceptionally well painted, as are the green eyes. I really dig the subtle black outline around the eyes. Seeing as how the figure required only the minimum of painted detail, it’s nice to see they did it right! 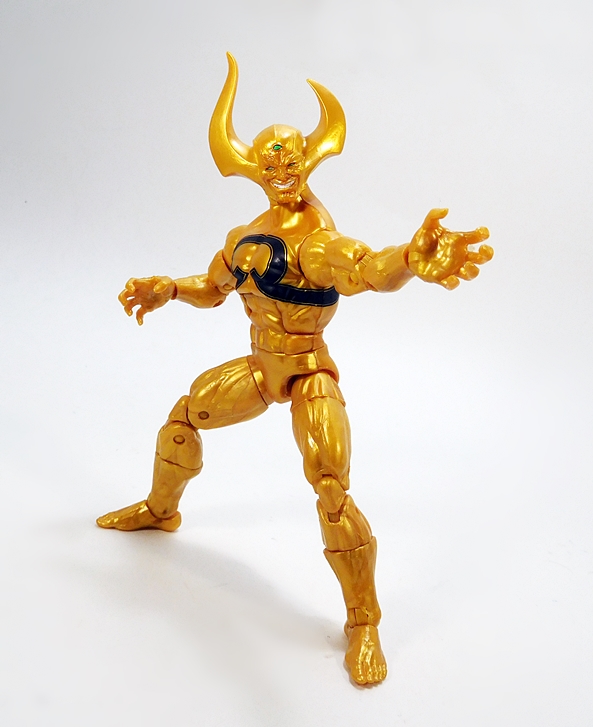 The articulation is pretty standard. The arms have rotating hinges in the shoulders and wrists, swivels in the biceps and double hinges in the elbows. The torso features an ab crunch hinge and a swivel in the waist. The legs are ball jointed at the hips, have swivels in the thighs and lower legs, and double hinges in the knees. The ankles are hinged and have generous lateral rockers. And finally the neck is both hinged and ball jointed. The joints on this guy feel great and he is a lot of fun to play around with. 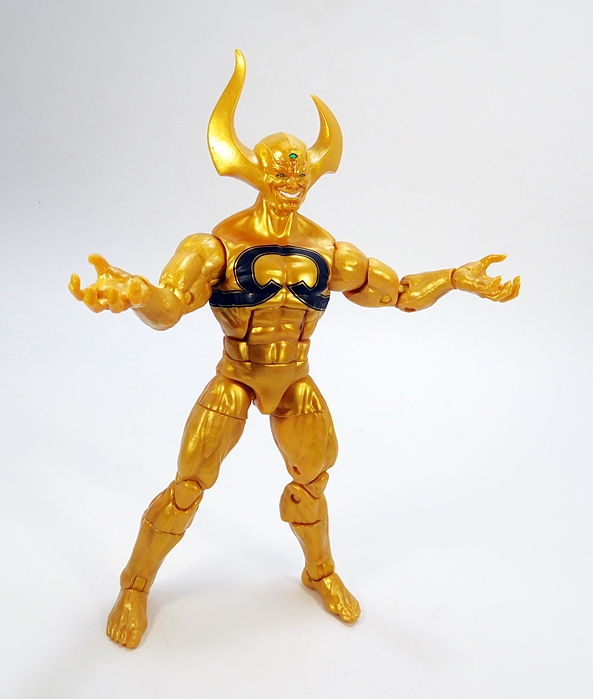 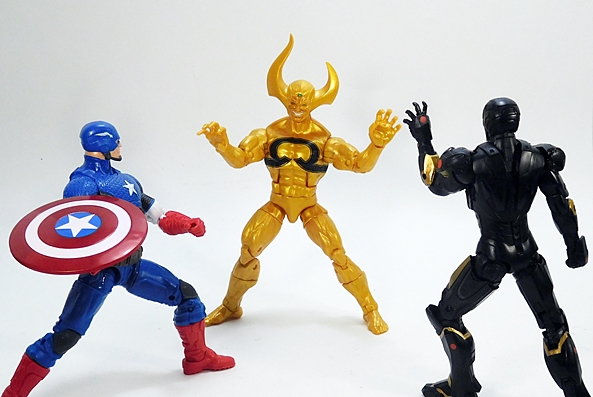 I would imagine that Ex Nihilo has a number of Legends collectors scratching their heads. He’s from a story that’s not old enough to be classic, and not recent enough to be all that relevant. To my knowledge he’s never really been affiliated with The Guardians of the Galaxy either, although he is part of Cosmic Marvel. Nonetheless, he comes from a solid run of The Avengers, and I’ve wanted some figures from this run ever since it debuted. The fact that we’re only getting Ex Nihilo now gives me hope that we could still see some other figures from this book. In addition to Abyss, I’d love to get a Starbrand, and while Captain Universe is part of a wave hitting the shelves now, I’d really like the Tamara Devoux version as well. Either way, I’d say this wave is off to a solid start. And as mentioned earlier, I’ll be back later tonight to check out the other half of the “Cosmic Protectors:” Adam Warlock!