It’s been a long while since I’ve had the opportunity to gas on about how much I love the G1 Jumpstarters toys. So many of my friends hated them, but I could never understand why. They had, what I always considered to be, Cybertronian alt modes, they’re robot modes actually looked like designs right out of the Sunbow cartoon, and they transformed instantly, making them loads of fun to play with. And oh boy, did I play with mine. They were in every battle. Particularly Topspin, just because I liked his alt mode a little more. What’s that? They were bricks? Yeah, so were a lot of G1 Transformers. That never stopped me from having fun with them.

Needless to say, I’ve been looking forward to this review ever since I saw Hasbro’s first promo shot signaling Topspin’s return to the toy aisle via the Titans Return line! It actually surprised me that it took this long to get us an updated Topspin, especially since the character was so high profile in the much beloved Wreckers comics. Indeed, the character even got the third-party treatment quite a few years back from Mech Ideas. Could Hasbro possibly churn out a better figure at about half the price? Let’s find out… but I’ll save the comparison for the end. 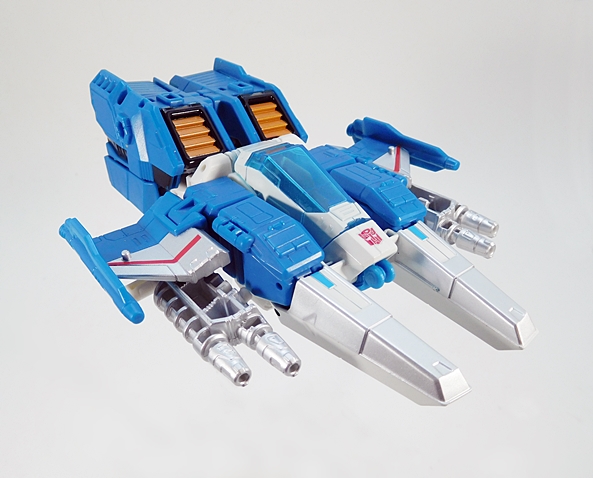 So, Topspin’s alt mode is a Cybertronian jet, which definitely pays homage to the original toy, but brings some new stuff to the table as well. Now, I always thought that the two pylons coming off the front were both cockpits, kind of like Slugslinger. Whether or not that was ever intended, this new version gives Topspin a proper single cockpit right in the middle of the jet, making those two pylons just twin nosecones of some sort. I’m strangely OK with that. Everything else is more or less right on target. The stubby wings are pushed up from the back a bit, and they have a nice little angle to them. I’m also pleased to say that this update hides the robot arms a lot better than G1 Topspin. The hunched back features a pair of intakes behind the cockpit, and Topspin wears his folding landing gear in full view, right between the nosecones. I really dig this alt mode a lot, and I can really picture him dogfighting with Triggerhappy over the metallic landscapes of Cybertron.

Oh, and will you just look at the thrusters on this guy! These are some proper Space 1999 Eagle kind of rocket boosters. Fantastic!

The coloring is very much on point. You get the very familiar blue and off-white plastics for the body. The cockpit canopy is cast in translucent blue plastic with some paint that matches the body very well. The intakes are gold framed in black and there’s some of absolutely gorgeous silver paint on the pylons and guns. The wings also have some silver with red striping to mimic the stickers on the original toy. There are a few different configurations for the guns. My favorite is the stock, under the wing, configuration. My only gripe here is that the hollow portions are exposed from the top. I wish those were filled in. Ah, well!

Topspin’s little Titan Master is Freezeout and as far as these little guy’s go, he’s about as typical and nondescript as you can get. He shares the same blue and white plastic as Topspin, features no paint hits at all, and has a big screw in his chest. And, of course, he can sit inside Topspin’s cockpit and pilot his bigger half. You also get some tiny foot pegs on the wings, in case you want to load Topspin up with more little bots. Unlike the original toy, Topspin obviously doesn’t just flip into his robot mode. Nevertheless, the transformation is still pretty simple and features a few clever little moves.

And the result ain’t too shabby! Topspin gains a less squat and overall better proportioned upgrade and fits in beautifully with his fellow Titans Return Deluxes. He even keeps the original’s same silhouette by wearing his wings on his shoulders. There are some really solid callbacks to the original toy here as well, particularly in the panel lining on his chest, the lower position of the Autobot emblem, and even the blue hinges down near his robo-groin. I especially love how they took the intake sticker designs from the original toy’s knees and turned them into the fully realized intakes that you see in his jet mode. Likewise, you get painted panels on his shoulders and striping on his wing shoulders to match the G1 stickers. If I could change one thing, I probably would have had the spot on his right chest painted in to look like the catch on the original toy. Then again, I could probably do that with a Sharpie myself.

From the back, things are pretty interesting. The twin nosecones and cockpit canopy fold in to form his back in a sort of criss-crossing diagonal configuration. These pieces don’t really lock into place, but they hold there really well. As a result, Topspin looks really nicely filled out from the back. It would have been nice if the hinges in the wings allowed them to fold all the way back. Yes, that would spoil a big part of the G1 design homage, but sometimes they can be a bit cumbersome jutting out like that.

Freezeout forms a very respectable head that follows through on the homage nicely. The “helmet” really evokes the old style and the gold stripe sticker on the original toy is recreated here both in sculpted detail and paint. The silver used for the face is beautiful and there’s a different shade of blue used for the visor. Topspin sports a pretty stern expression, confirming what I already know: You don’t mess with a Wrecker!

I also want to throw out there how much I love Transformers with thruster cones in their feet. two of Topspin’s four engines wind up in his heels. 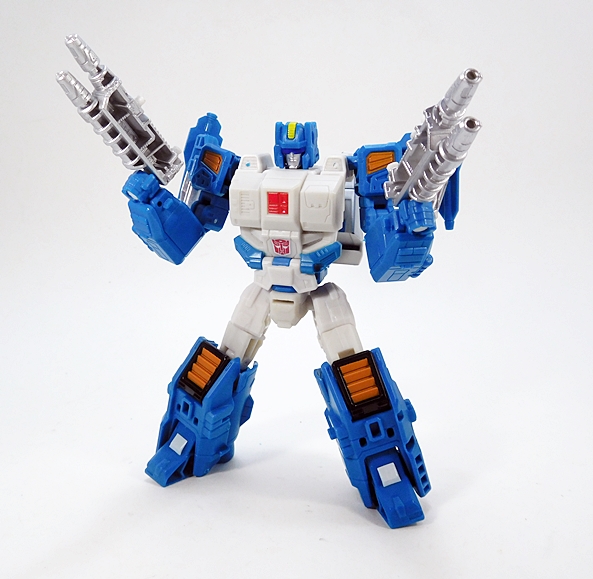 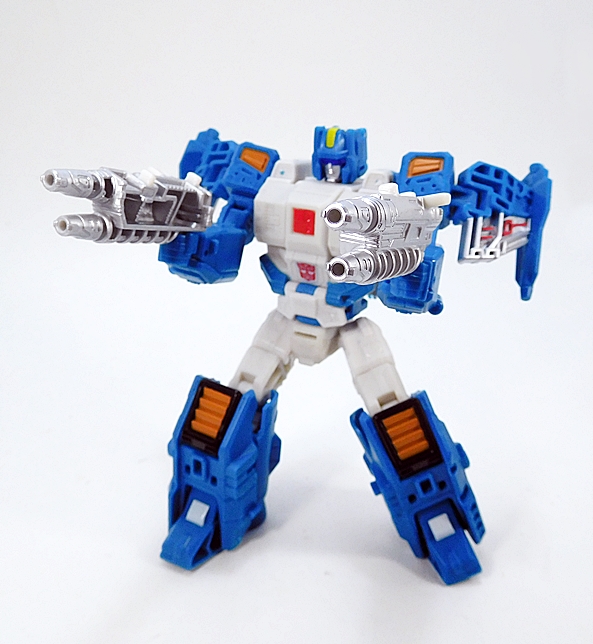 And then you have these guns… I love these guns!  The over-and-under barrels look great, and I dig the sculpted coils on the lower barrels. The silver paint also looks superb on these. Seriously, this silver paint that we’ve been seeing for the last couple of years is the best thing that’s happened to Hasbro in a long time. I hope they never stop using it. As cool as these twin guns are, sometimes you really need to make a statement… and that’s when you combine them for…

QUAD DAMAGE!! Holy shit, look at this thing! It’s both ridiculous and breathtaking at the same time. It’s a weapon fit for a Wrecker. I shall call it The Streetsweeper! Wreck’n Rule! 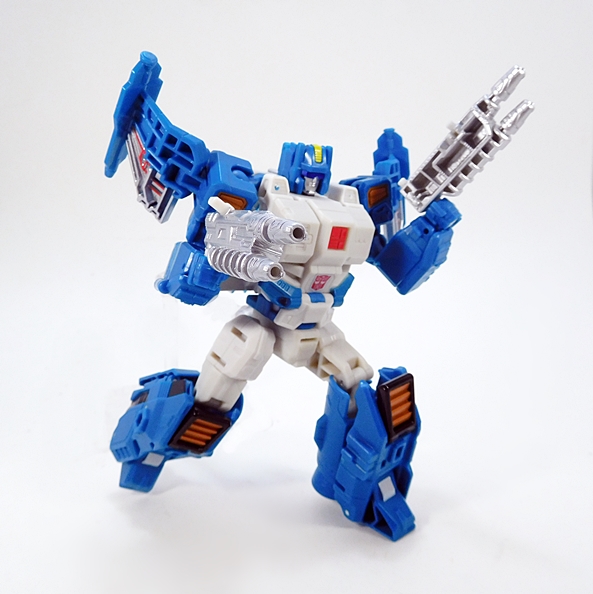 So, before wrapping up me spooging all over what is a truly fantastic figure, it’s time to pull out the Mech Ideas version of Topspin (called Apex) for a quick comparison. To put things in perspective, Apex was released back in 2013 along with Not-Twin Twist by one of the smaller third-party convertobot makers. They were packaged separately, but I bought them as a set for $70 and reviewed them very favorably back then. As far as 3P Transformers go, $35 a figure is pretty cheap, even when you consider that these guys were closer to the modern Legends Class than Deluxes. Let’s check out the alt modes… 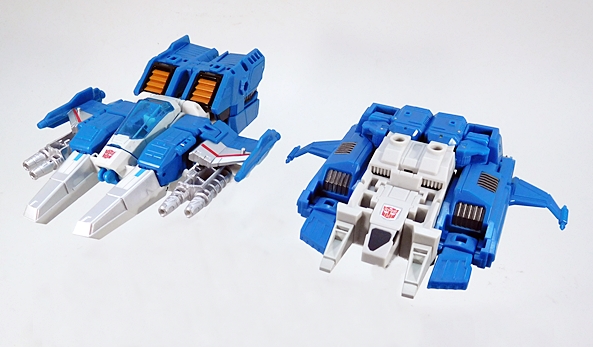 Yeah, this fellow’s alt mode hasn’t aged very well. I like to think that Apex is supposed to be a much larger craft with that little triangular window housing a sizable bridge. It’s definitely a different take on the original vehicle design, but it feels really bland to me now and way too squat. You could add a little more to it by plugging Apex’s guns into the top, but it doesn’t change it up that much. I think Topspin’s alt mode blows this one out of the water. The design is more interesting to me and it makes far better use of paint apps. Transformation on Apex is also more fidgety and complex. Let’s move on to bot modes… 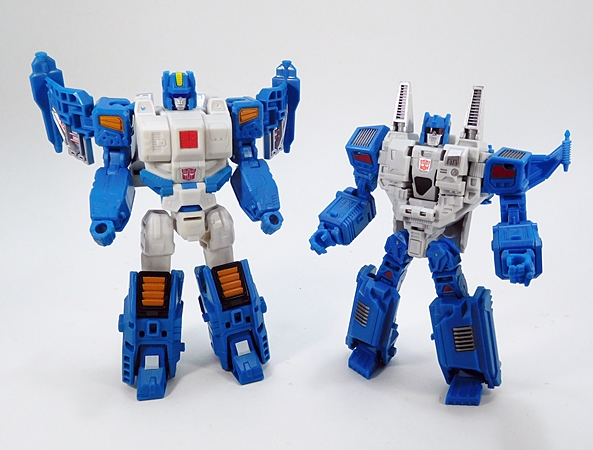 Pretty much the same thing here too. Besides being considerably smaller, Apex looks a lot rougher in comparison to Hasbro’s official figure. Some may prefer the busier and more complex sculpting of the chest, but I think it looks more unfinished. I also think the Seeker-style shoulder intakes work against the character homage. The shoulder wings on Apex don’t really lock in at all and his joints were fairly loose out of the package and haven’t gotten any tighter. What does all this mean? Nothing really. Except maybe that Hasbro has been taking notes and getting more creative with their designs and engineering. At the very least, I find it interesting that they are able to produce a Deluxe figure that is (in my opinion) every way superior to a figure that sold for twice as much and had no safety regulations working against it. Apex still has some merits. I don’t want to pile on the hate, but in the end… 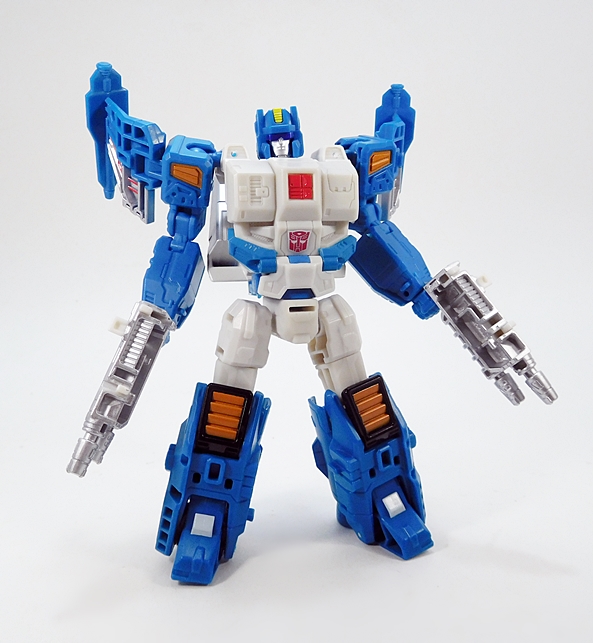 And here’s the part where I remind myself that Titans Return Deluxe figures can do no wrong in my book. That statement continues to ring true, as Topspin is a real treat. He’s not only the first true modern update of one of my favorite oddball Transformers as a kid, but he’s an absolutely stellar update on every level. I cannot wait until I can pair him up with his fellow Jumpstarter, Twin Twist. Hopefully it won’t be long. Next Thursday, I’ll keep on moving through this wave with a look at one of the repaints!