It’s another double-feature Marvel Monday today, folks, as I try to climb my way out of the pile of backlogged waves of Marvel Legends that are taunting me from the corner. Today I’m dipping into the MCU figures of the wave with a look at Star-Lord this morning, and Rocket & Groot later this afternoon. Let’s shang-a-lang this… 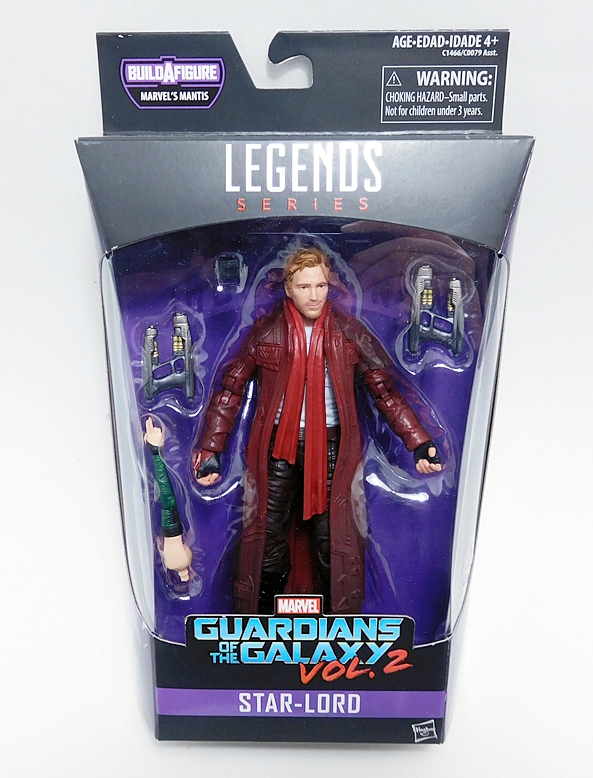 Heeeey, you can’t fool me. We just looked at a Guardians Vol. 2 Star-Lord in the last wave… What gives, Hasbro? Yes, this is a second version of Peter Quill, this time with the longer coat and scarf. To be clear, this is Star-Lord and not in any way The Fourth Doctor! Understandably, a lot of this figure reuses parts from the last release, so this review should go pretty quickly! Let’s start off with a direct comparison to the release from the last wave with a pair of Pratts. 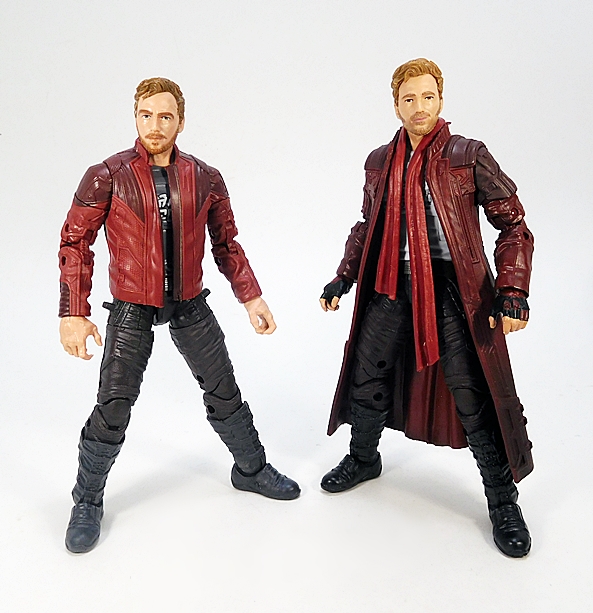 OK, so the underlying buck is the same, but the arms are new to make up the sleeves of the new coat and also to include a pair of sculpted finger-less gloves on the hands. This new Star-Lord looks a little taller, but I think that’s just because the coat sits a little higher on the shoulders and the head may fit a little higher on the ball joint. Since the bucks are mostly the same, the articulation here is identical. so feel free to duck back and check out the articulation rundown for the Titus Wave figure. 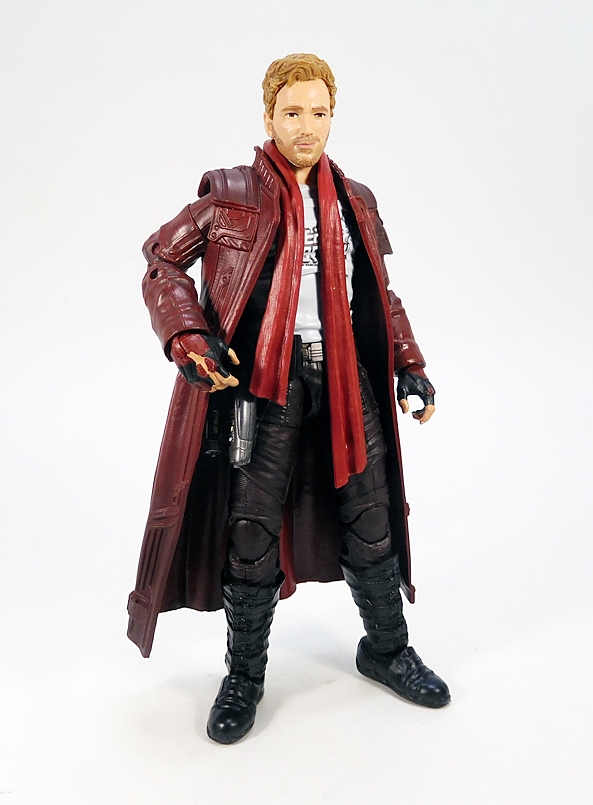 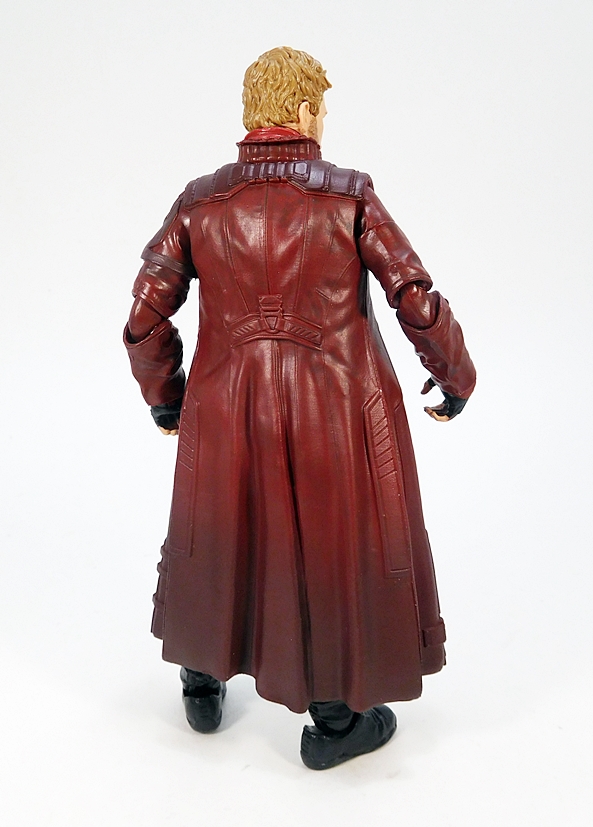 The new coat is very nice. While it invokes his look throughout most of the first movie, the garment was redesigned for Vol. 2 and that makes it a lot different than the one on the figure from the first film. It’s not worn and tattered, and it doesn’t have all the armor bits attached to it. The sculpt is a little on the soft side, but there are still some nice details here. I particularly like the reinforced area around the shoulders, and all the seams are present. This is definitely my preferred look for the character. I’m sure the shorter jacket would be preferable in a fight, as it’s not as cumbersome, but this look has more of a swashbuckling and adventurous flavor. 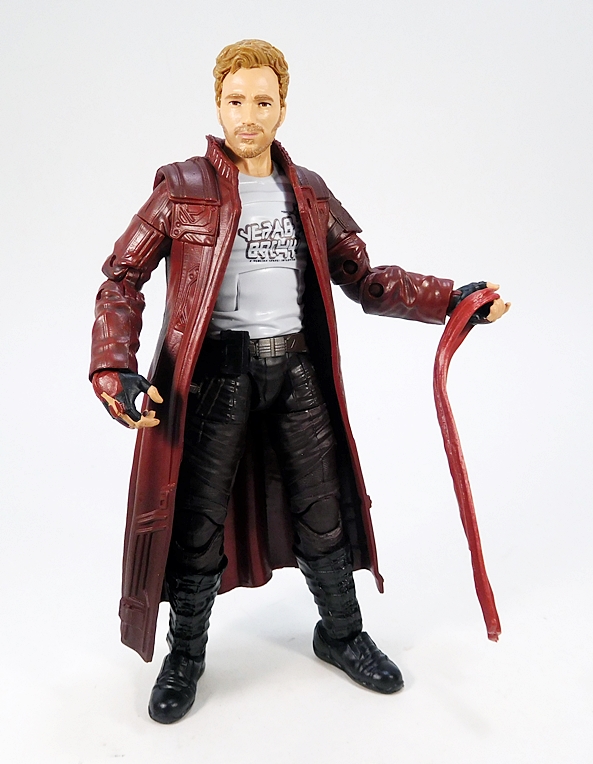 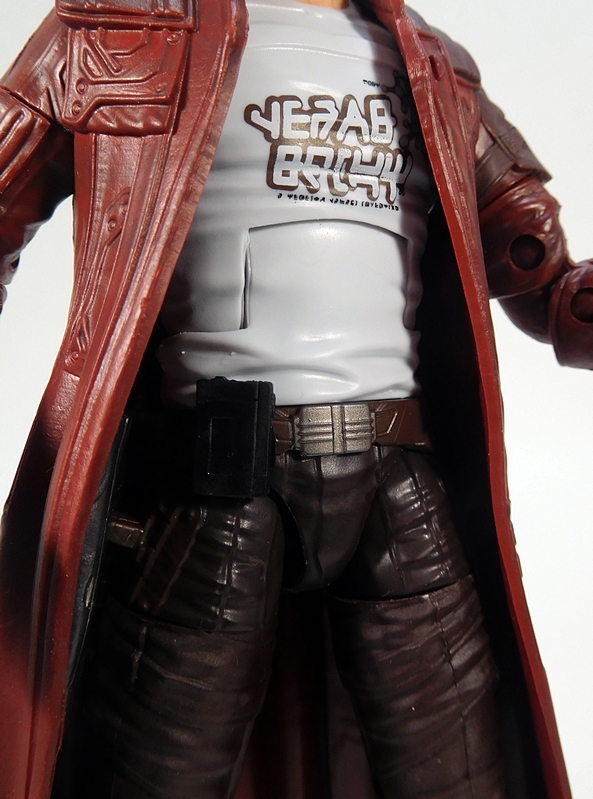 The scarf is removable and simply hangs around his neck. It looks good, but it does obscure the printing on his shirt. While we’re on the subject, the shirt features the same printing we saw on the previous figure, but the shirt itself has been repainted to be a much lighter color. Did he have two colors of the same shirt in the film? I can’t remember. To be honest, I’ve seen the film three times, and I don’t even remember him wearing the scarf. It’s tough to see with the longer coat, but he still has the thigh pegs to hold his guns. Also, in the above shot, you should be able to make out the Walkman accessory that he comes with. It can tab right into his belt, and the previous Star-Lord release has the same tab, so you can use it on either figure. It’s a pretty lame accessory, though, as there are no headphones and no paint. 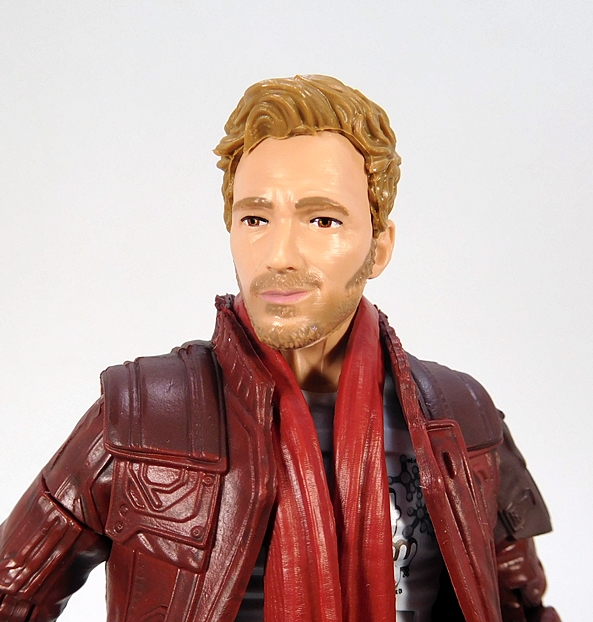 The new and expressive portrait features a slight smirk. It’s solid enough, but I don’t think it’s as good as the likeness we got on the last figure. The sculpt is fine, but I think the paint might not be quite so on point this time around. I’ll admit, I’m really nit-picking. Besides, the heads are interchangeable, so you can mix and match as you like. It’s certainly worth noting that this version of Star-Lord does not include the masked head, so if you want that look, you’re going to need both figures. 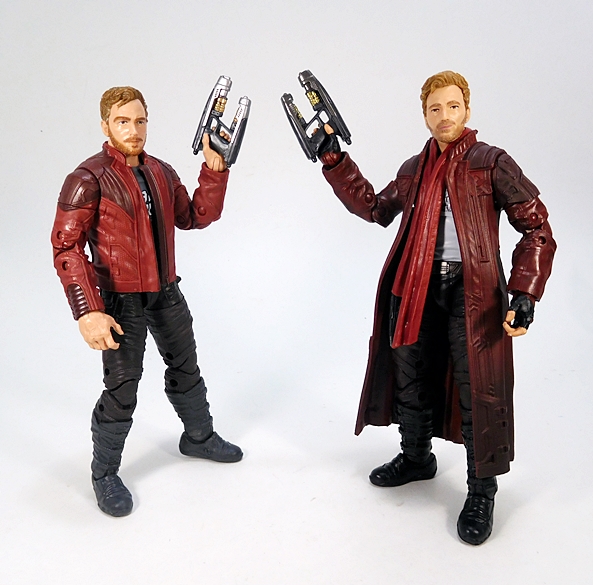 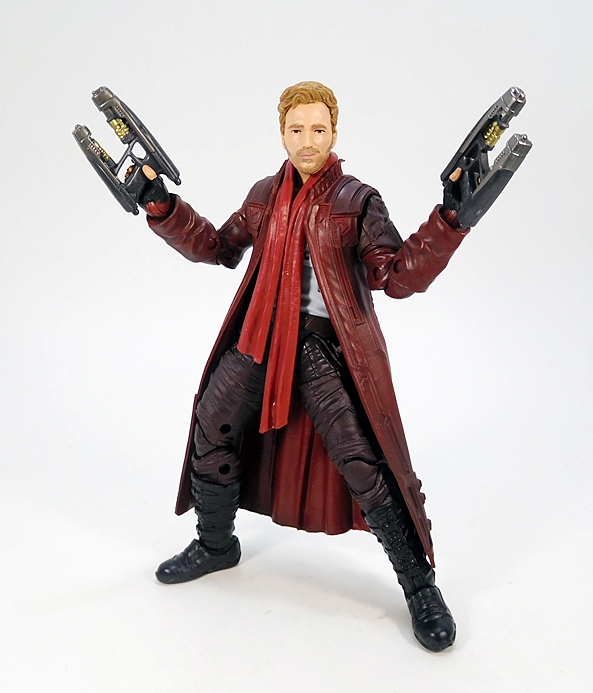 Last up, we have the guns, and these are the same sculpts as last time but with some variation in paint. The silver paint from the last release has been updated to a darker gray. I’m not sure why Hasbro did this, as they’re obviously supposed to be the same guns, but it’s not something that really bothers me. 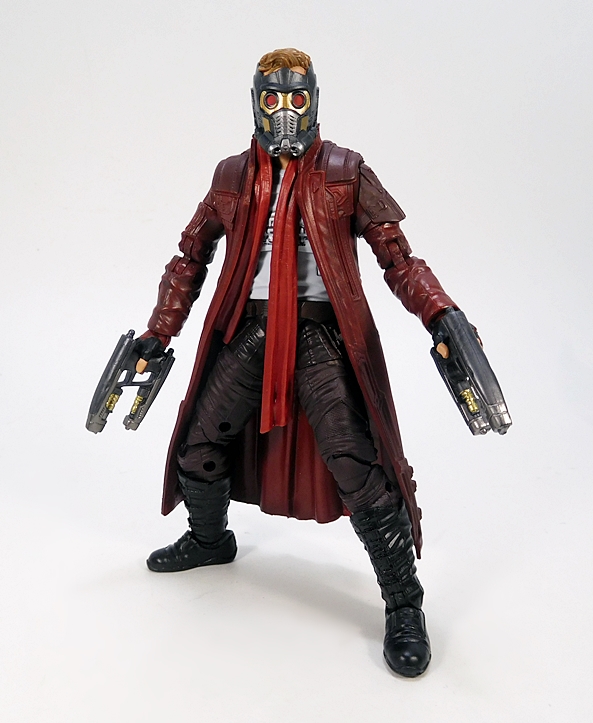 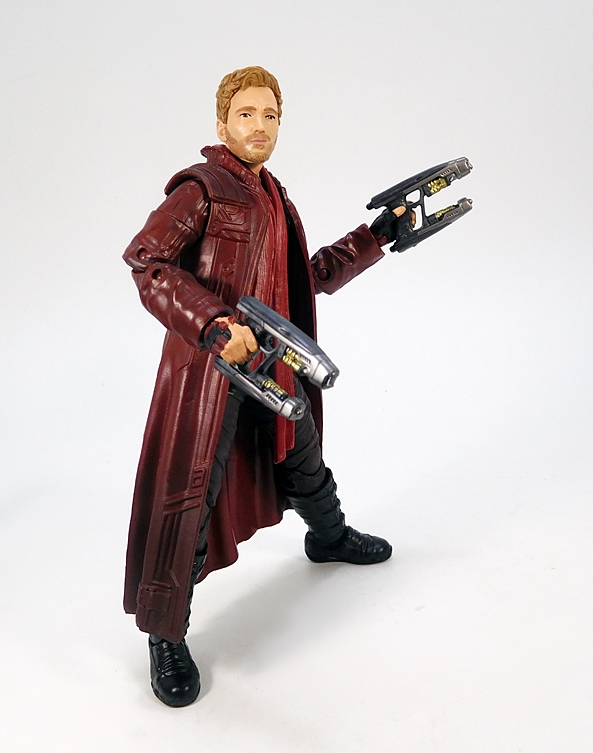 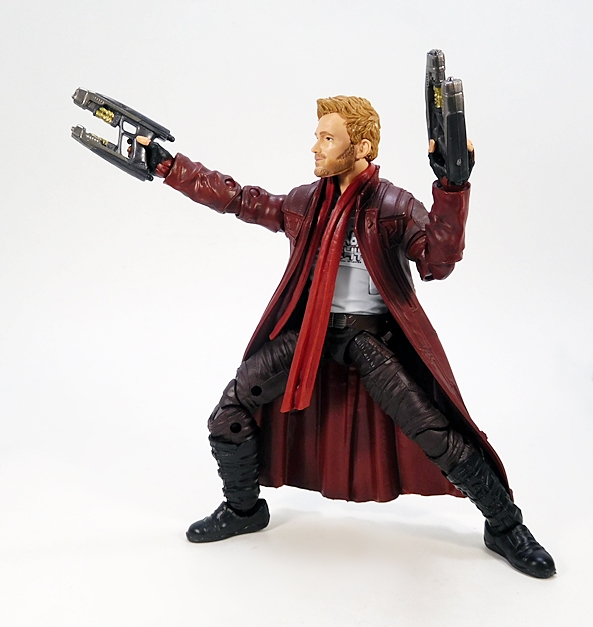 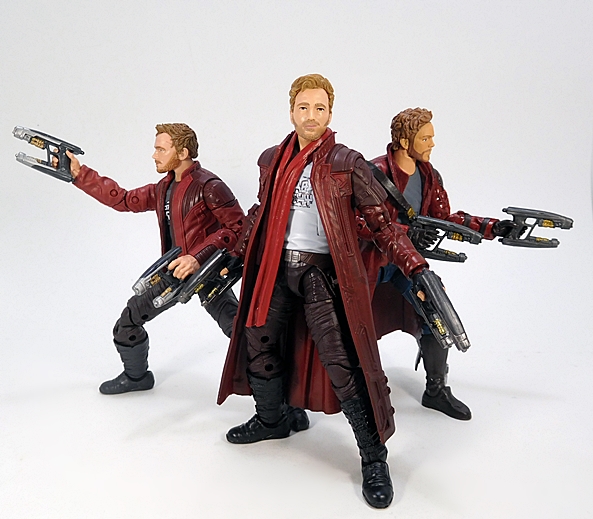 This second Star-Lord is a fine figure. I do like the longer coat look better, but if pressed, I ‘d have to say that the release from the last wave is my favorite of the two. I know some people are pissed that Hasbro double-dipped on the character between the waves, and that feeling is probably aggravated by the fact that this time around you do have to buy him if you want all the BAF parts. That having been said, I like the idea of having both with inter-changeable heads. It gives you a number of display options. In the end, I’ll probably display this one with the masked head from the previous release and cast the smirking head into the Tote of Forgotten Accessories!