It’s hard to believe it, but this is my first DC Multiverse figure. I’ve been largely avoiding this line because I haven’t heard great things about it and I’m still, YES STILL!!! bitter about Mattel killing off DC Universe Classics only to seemingly re-brand it over and over again in slightly different scales and styles. But, a friend of mine was looking to unload a wave of these for stupid cheap and so I took them off his hands, mainly for the figure I’m looking at today and maybe to satiate my mild curiosity.

The packaging is pretty cool, especially when comparing it to the likes of Hasbro’s Marvel Legends. You get a collector friendly window box that shows the figure off nicely and some character art and a little bio on the side panel. The character selection for this wave is all over the place, but the “Collect & Connect” Doomsday figure is motivating enough to get them all. This version of Supergirl is from the TV Series. It’s a show I started watching as a guilty pleasure, but it’s grown on me a lot. It’s upbeat and good-natured, and I like to think of watching it as passive resistance against the asshole impostor that’s walking around in Superman’s costume in the DC movies. 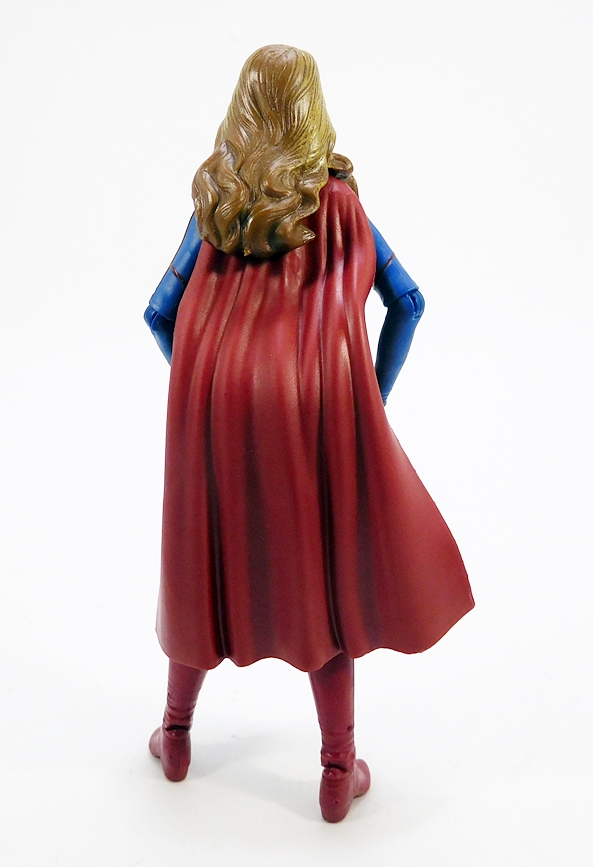 This is clearly a tale of two figures. From the neck down she looks pretty damn great. I really dig the design of her costume in the series and Mattel did a nice job recreating it here. The S-shield is actually part of the sculpt, as is all the piping on the torso and arms. The belt is sculpted, the pleating on the skirt looks natural, and the boots have little wrinkles here and there. The cape falls pretty naturally and it doesn’t even throw off the balance of the figure too badly. The paint is also exceptional for an off-the-peg Mattel figure. The blue they used for her top is deep and goes really well with the somewhat subdued red of the skirt, cape, and boots. The gold paint they used for the belt and the trim on the S-Shield is quite striking and both it and the red piping on the suit are applied with care and precision. This is surprisingly great stuff! And then you get to the head sculpt. 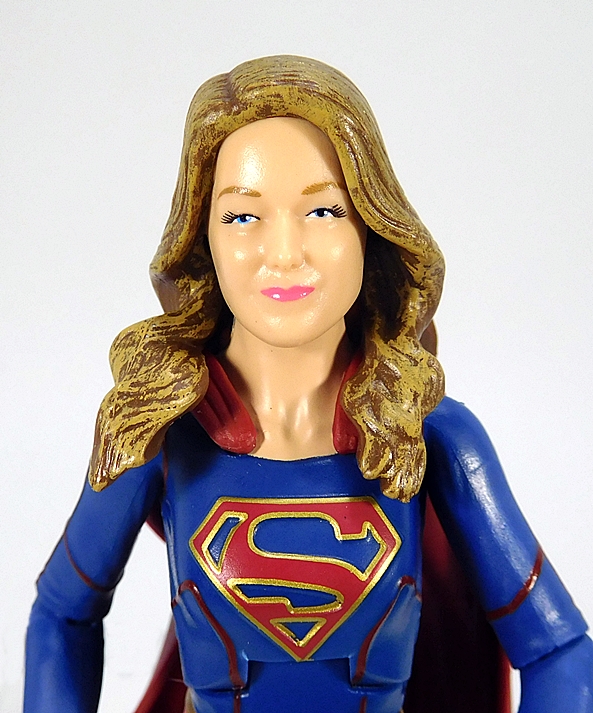 Woof! What happened here? I mean, I’m not expecting great things, but how the hell was this even approved? Melissa Benoist is an aggressively cute young lady and this is… WHAT IS THIS?  It’s hard to tell what lets this portrait down more, the sculpt or the paint, but in the end it doesn’t matter. It looks like Supergirl got stung by an army of Kryptonite bees and her face is in the process of swelling up and she’s trying to smile it off and act like nothing happened. YOU DON’T SHRUG OFF A BEE ATTACK, MS. DANVERS!!! Also, those printed eyes are just laughable. I will admit, that this head does not photograph well. It does look a little better in hand. At the right angle with the light shining just right, I can kind of see a little of Ms. Benoist in there, but not enough of to save it. What a shame. 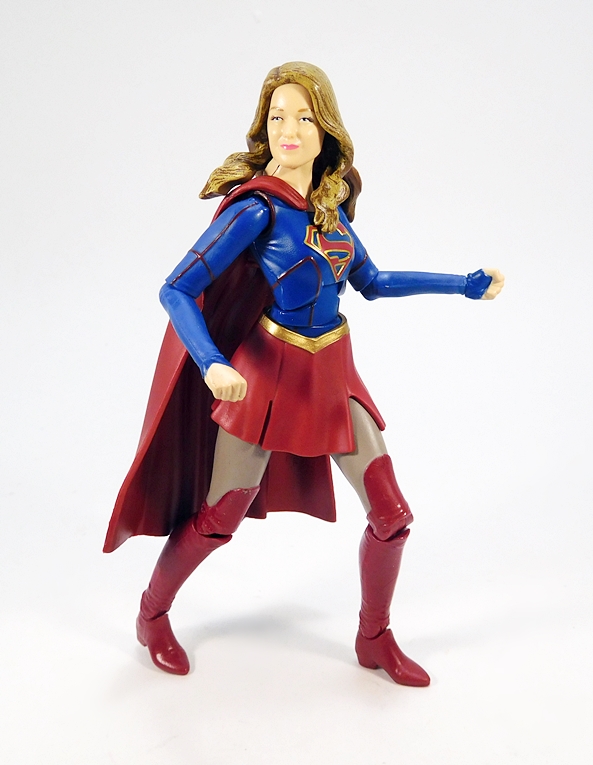 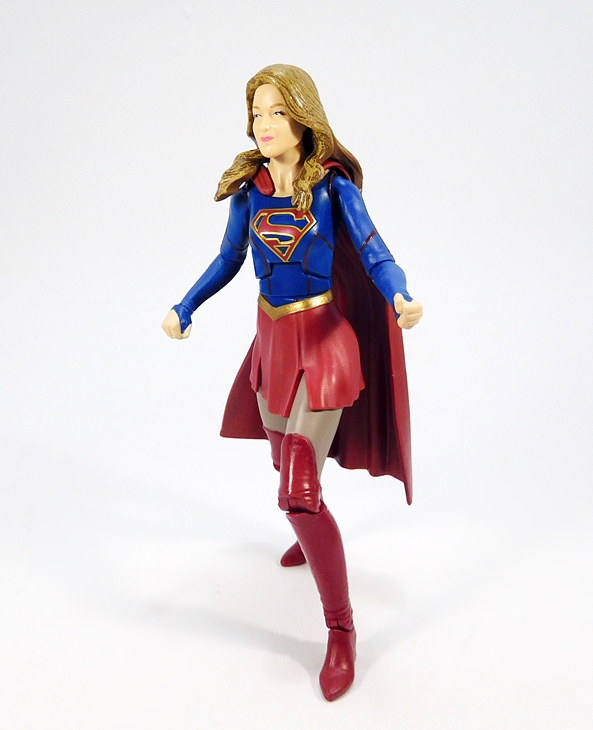 Following hot on the heels of that facial disappointment comes the articulation. Now, what’s here sounds decent on paper. The arms feature rotating hinges in the shoulders and elbows, with swivels in the wrists. The legs are ball jointed at the hips, have swivels in the thighs, and hinges in both the knees and hips. The torso swivels at the waist, has an ab crunch in the chest, and a ball joint in the neck. There are some obvious bummers here, like no swivels or lateral rockers in the ankles and no hinges in the wrists, but there are a few more problems worth mentioning.

The range of motions in the elbows sucks, mainly because of the way they’re sculpted. She can’t even do a proper hands-on-hips heroic stance. She can barely get right angles out of those guns. Also, the ab crunch hinge is designed so that she can only bend backwards. That’s helpful when trying to put her into a flying pose, but forward movement would have been nice as well. Besides, the sculpted hair keeps her from looking up anyway, so she still can’t really do a very good flying pose.

I was particularly interested in the scaling on these figures, and surprised to find that they scale pretty well with the old DCUC line. On the other hand, they scale surprisingly poorly against Mattel’s more recent Movie Masters line. On the plus side, Mattel seems to be producing all the DCTV figures in this line, so at least those will all display well together.

With some potentially bright spots, this figure still ends up disappointing. I’m pleased to say that it isn’t the kind of junk that I was expecting it to be, but between the limited articulation and the disaster of a face, it’s not hitting the mark. I think Mattel is getting around $20 a pop for these, which feels like a lot. If I break down what I paid for this wave, she’d be more like $8, so I’m not complaining. I’d still like to pick up DC Collectibles’ version of DCTV’s Supergirl and see how it compares. In the meantime, I’ll probably be revisiting the rest of this wave on future DC Fridays when I have nothing better to look at.