It’s Marvel Monday, and I was supposed to be checking out Nebula from the Mantis Wave of Marvel Legends today, but I’m preempting that AND THE WHOLE DAMN WEEK so I can check out the Marvel Legends San Diego Comic Con Exclusive A-Force set. Yes, that means Transformers Thursday and DC Friday will return next week. I’m pretty excited, because this is the first Marvel Legends SDCC Exclusive that I’ve been able to pick up since the Thunderbolts set way back when. Although, in fairness I haven’t tried very hard. There are six figures in the set, so I’ll be looking at these ladies every day this week up through Saturday and starting today with Monica Rambeau. But first, let’s take a look at the packaging!

Big! Colorful! Beautiful! Those three words sum up the presentation here. The figures come in an impressive box, which is big enough that it requires me to embiggen my little staging area to accommodate it. You get some lovely artwork on the front, along with the character portraits running down the side panels. There are some great expressions on the ladies. I’m particularly digging Elsa’s snarl. RAWR!! There is a foil sticker in the upper right hand corner showing this to be a Toys R Us Exclusive, where it was available online for a short while during the Convention. It does not, however, state anywhere on the box that it is an SDCC Exclusive. I’m just glad it wasn’t a Hasbro Toy Shop exclusive, because I doubt I would have been able to snag one. My luck there in past years hasn’t been so hot. 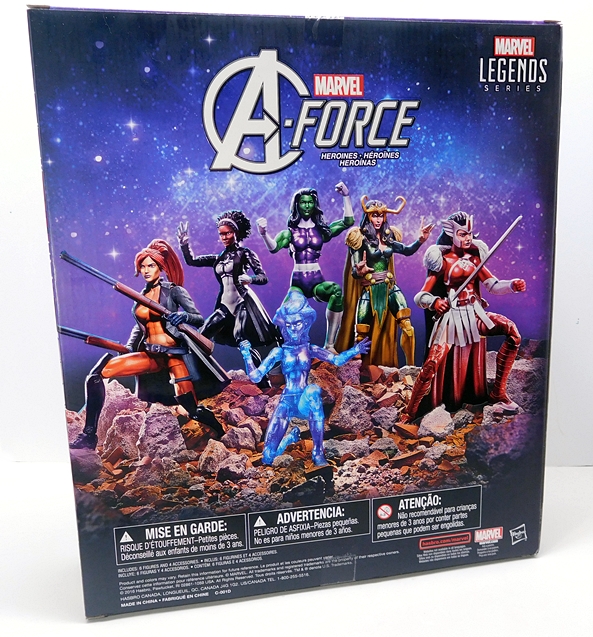 The back shows a collective photo of all the figures posed together on a cool rocky landscape. This shot reminds me of some of the great ads Hasbro used to run in their Marvel comic reprints. Of course, if you want to have a peep at the actual figures themselves, there’s a front flap that opens to reveal the inside tray, and the interior of the flap has character art and little blurbs about each character. The box itself is collector friendly and can be opened by slitting the tape on the top or bottom flaps, so you don’t have to feel bad about opening this baby up. 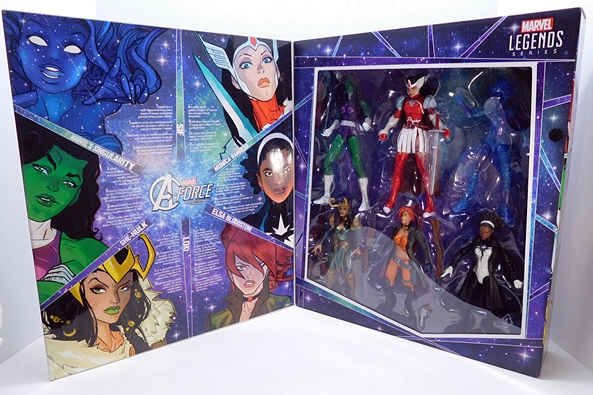 I’ll fess up now and proclaim that I purchased this set for the individual characters and not because I was a fan of the A-Force comic. Without getting bogged down in a rant about how much I hate the hot trash that Marvel is publishing these days, I tend to look at A-Force as an early symptom of what was to come. It only lasted a year before being discontinued due to dismal sales, and that’s saying a lot, because if you happen to look at what Marvel’s books are averaging in sales these days, you’ll see that it’s pretty dire. Anyway, if nothing else, I am grateful that the comic motivated Hasbro to release these figures, a few of which were sorely missing from the Legends line up. Plus, if you are going for an A-Force team, you can conveniently add the recently released Dazzler and Nico Minoru to this lineup. I’m starting today with Monica Rambeau, only because she is so overdue for a Legends figure, I didn’t think she should wait another day. 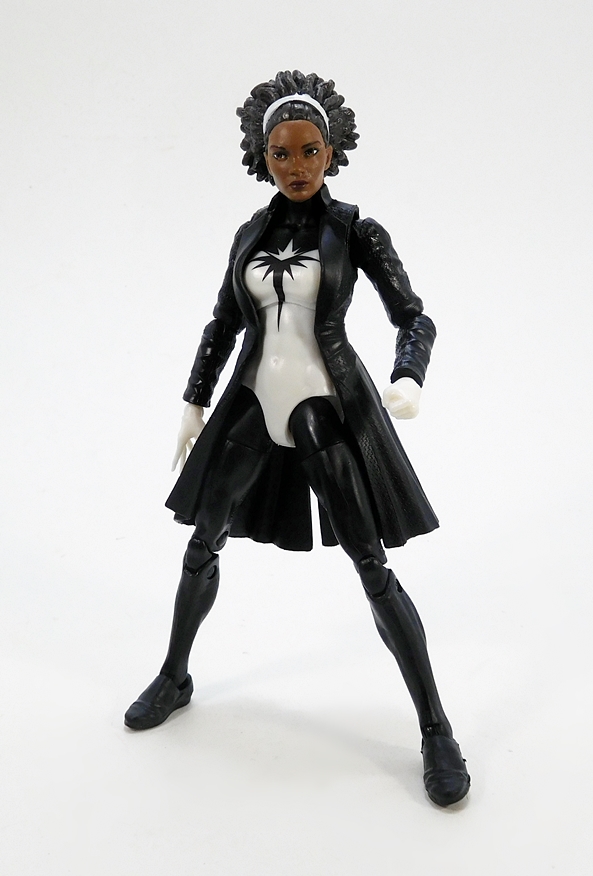 Whether you best know her as Pulsar, Spectrum, Captain Marvel, or just Monica, this is a character that is indeed well overdue for the Marvel Legends treatment. I’m pretty sure even Toy Biz never got around to immortalizing her in plastic. Maybe she had a HeroClix figure? Whatever the case she’s out now and I must say Hasbro did a great job with her. She’s built off the standard female buck, with sculpted sleeves on her arms to work with her jacket. Her starburst pattern is perfectly printed on her chest with the snappy inverse black and white coloring. And let me take a moment to say that the white plastic Hasbro used for the torso and gloves is absolutely gorgeous. It has a slight pearlescent sheen to it, but mostly it just looks so bright and snappy. I hope we see more of this stuff in future figures.

The sculpted jacket fits the figure well, cinching in at the waist and fanning out below until it reaches her knees. It’s fairly light and features a slit running up the back, so it doesn’t really impede her articulation much at all. There is some great looking texturing on it that makes it look even better than a regular comic figure. Indeed, there’s enough detail on it that it would look right at home on an MCU figure. 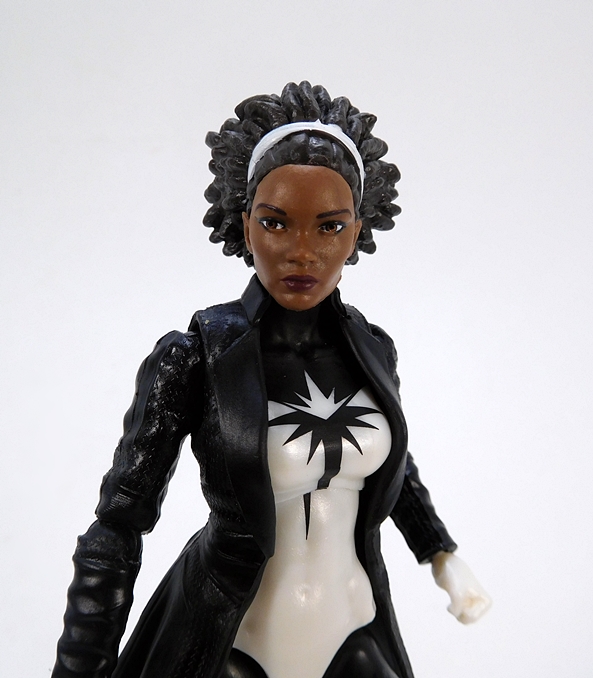 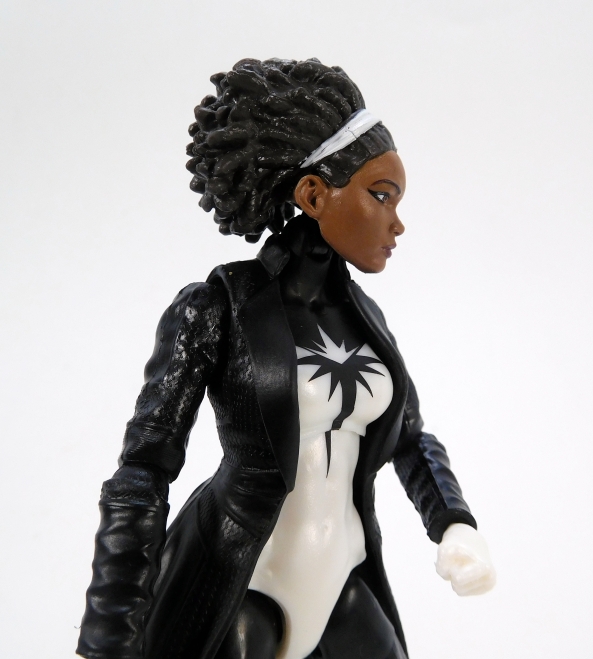 The portrait is excellent, and despite her hair band and hair style being similar to Misty Knight’s, this isn’t a recycled head sculpt. She’s pretty, she has a great, determined expression, and the paint applications for her eyes and lips are spot on perfect. The sculpting on the back of her hair is also especially well done. This is exactly the kind of effort you want to put into a premium exclusive set. 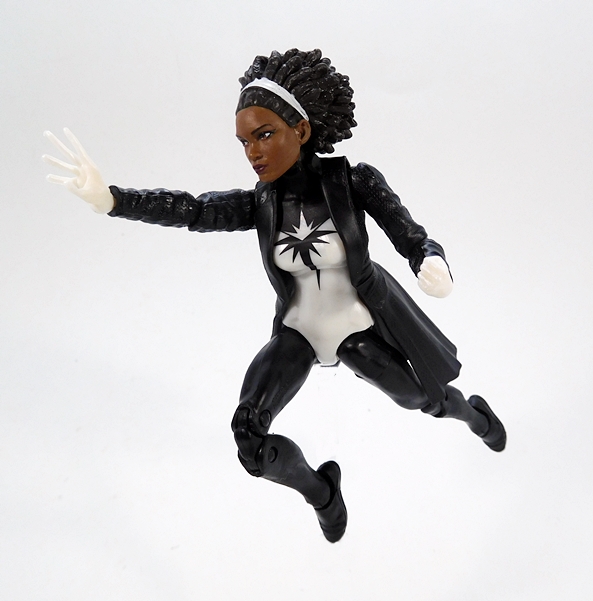 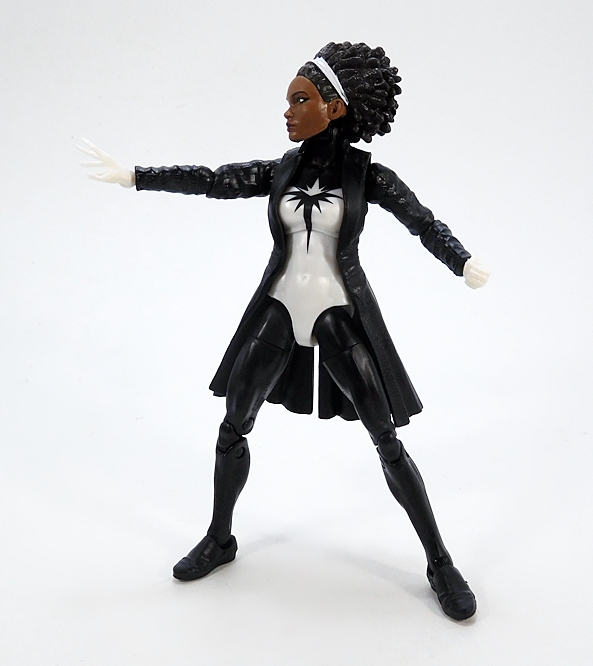 The articulation is exactly what I’ve come to expect from my Marvel Legends ladies. The legs feature ball jointed hips, double hinges in the knees, and swivel cuts in the thighs. The ankles have both hinges and lateral rockers. The arms have rotating hinges in the shoulders, elbows, and wrists. There’s a ball joint under the chest, and the neck is both hinged and ball jointed. As usual, it isn’t quite up to par with what we get from the dudes, but she’s still plenty fun and posable. 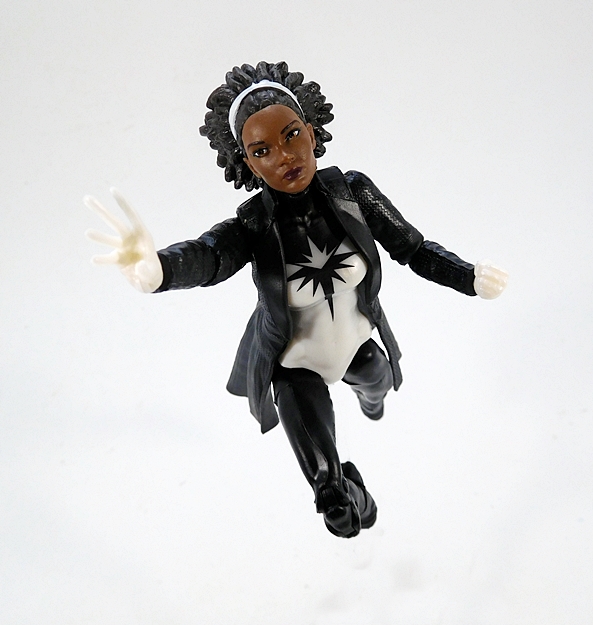 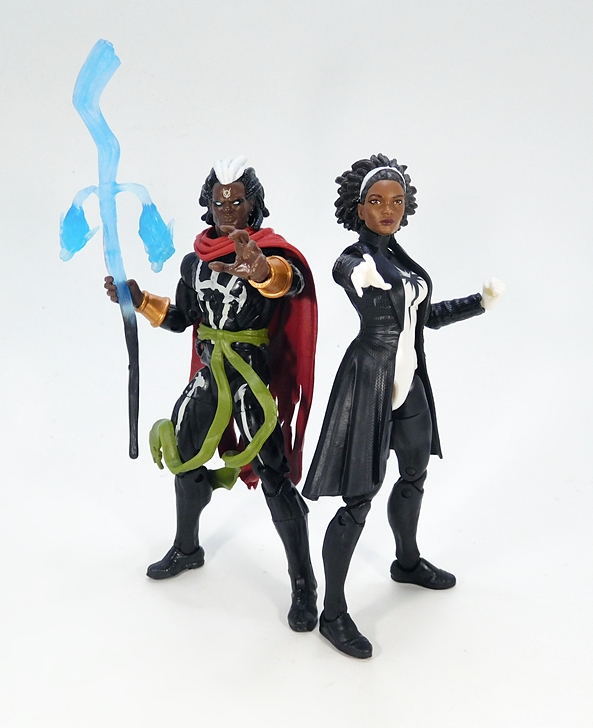 It would have been a shame to wait this long for a Monica Rambeau figure and have it come up lacking. Thankfully, that’s far from the case here. Everything about this figure is beautifully crafted, from the crisp paint lines and beautiful white plastic, to the first rate head sculpt. If I were pressed to suggest an improvement, I’d say toss in an extra set of hands, so she could have two fists and two energy casting hands. Actually, I will throw out one more gripe: Monica shouldn’t have been an exclusive release. A lot of the figures in here feel right for this set, but I’m hoping that Hasbro intends to release this character in a future wave, as they did with so many of the figures from last year’s SDCC Raft set, even if it is with a repainted costume.