After being locked into Marvel Legends reviews for over a week, it’s nice to stretch my legs and write about something different. I have piles of stuff to choose from, but ultimately I decided to go with NECA’s Heroes of the Storm line, because the final wave is out and I want to both celebrate this line and sob mournfully because it’s going away. This last assortment includes two figures from Warcraft and one from Starcraft.  And, today I decided to open up Thrall, Warchief of The Horde! 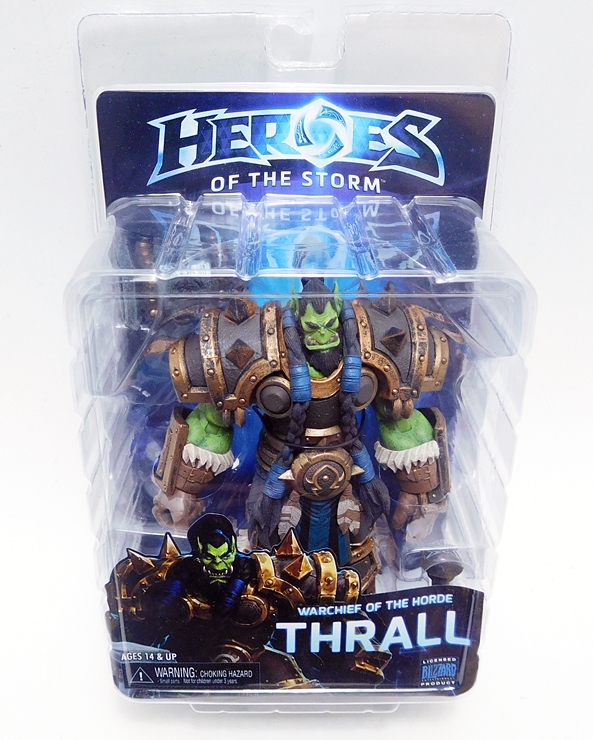 Because who rolls Alliance, amiriiiight? Well, I did once just to see how the other half lives, but most my time in WoW, I was Horde through and through. As usual, the figure comes in a sealed clamshell, which means it is not collector friendly, but it will give you a delightful plastic fume high when you open it. Just a reminder, I’ve never played Heroes of the Storm, but I have played the games that it draws its characters from. In this case the hundreds of hours I spent playing World of Warcraft served as a buttress to my life when I needed it the most. I also really love the aesthetic, characters, and lore. Oh, and it ran pretty well on the shitty laptop that I had at the time. Previously, Warcraft characters have included Stitches, Arthas, and Illidan Stormrage. It’s about time Orgrimmar was represented. What about Stormwind? Pahleeeez! 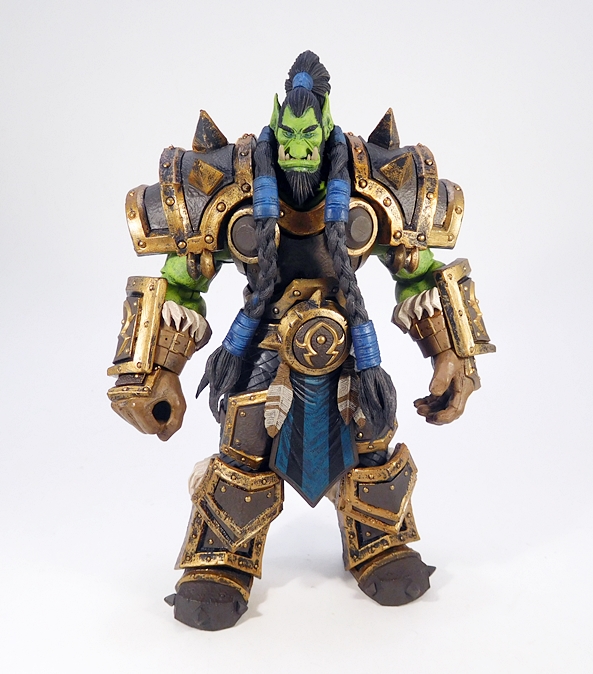 Mmmhmmm… NECA gives good Orc! Despite already putting out three Warcraft figures in this line, this is NECA’s first crack at one of the Orcs. I wasn’t worried, because they have proven that they have the Warcraft aesthetic down pat and Thrall here is yet another example of that. Just look at the love and detail poured into this sculpt. The figure feels so layered, as if all that armor could be removed, even though it’s mostly part of the buck. Each of the heavy armor plates are thoroughly convincing, with hammered finishes, sculpted rivets, and a gorgeously worn bronze paint making up the reinforced weathered edges. This is some incredible work! 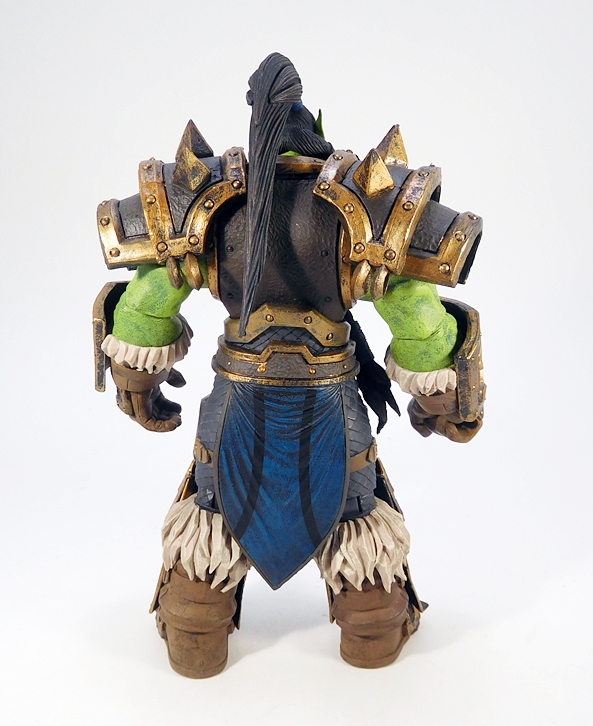 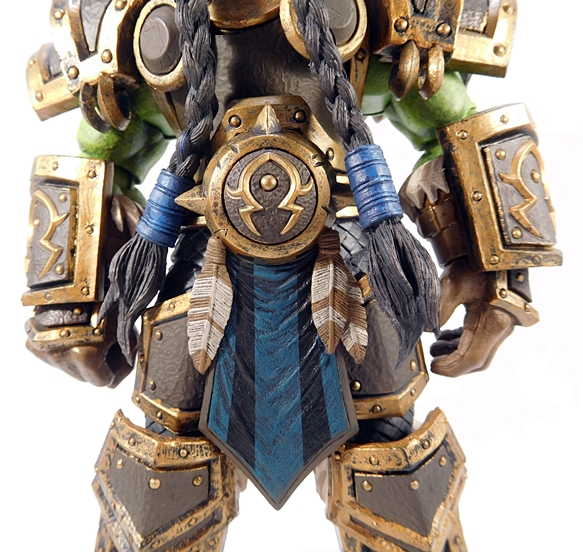 Thrall features raised Horde emblems sculpted into his large disc belt buckle as well as the plates on his gauntlets. The furry fringe on his boots and gauntlets have that distinctive angular flavor to them that comes out in the games’ Toons. The cloth sash has subtle sculpted wrinkles, which are beautifully brought out with a paint wash, and I love the sculpted feathers, which give the outfit a tribal motif. Behind those heavy plates on his legs, you can make out a cross-thatched pattern to the underlying suit, as well as the sculpted straps and painted buckles that are meant to be holding them on. 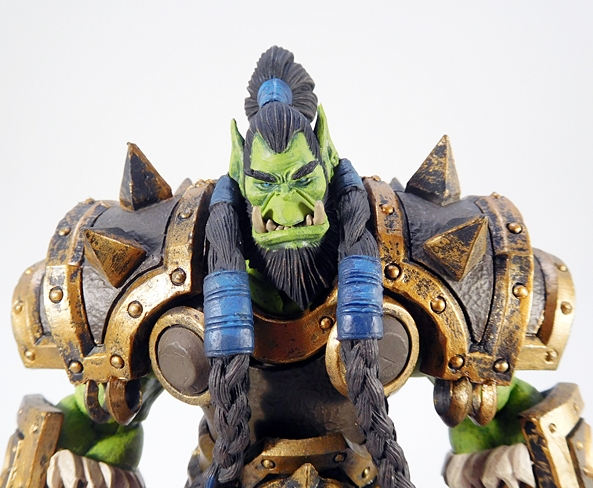 And those shoulders! Warcraft is infamous for its ridiculously proportioned shoulders and Thrall here is displaying the latest in Horde shoulder fashion. You get more of that wonderful hammered texture in the panels, laid into the bulky bronze frames with chunky spikes protruding outward. As for the portrait…  Those narrow eyes, the protruding tusks, those sharp ears, no doubt a handsome devil like Thrall has all the She-Orcs of Grommash Hold under his spell. I really dig his incredibly long braided hair as well. These are cast in fairly flexible plastic, and spill down the front along either side of his neck. I also love the color paint they used for his orc flesh. It’s a fairly bright green that contrasts beautifully with the armor. 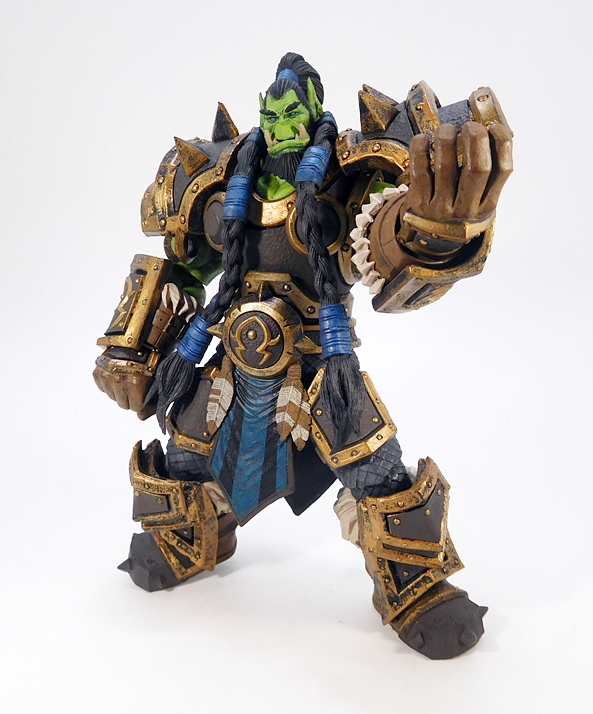 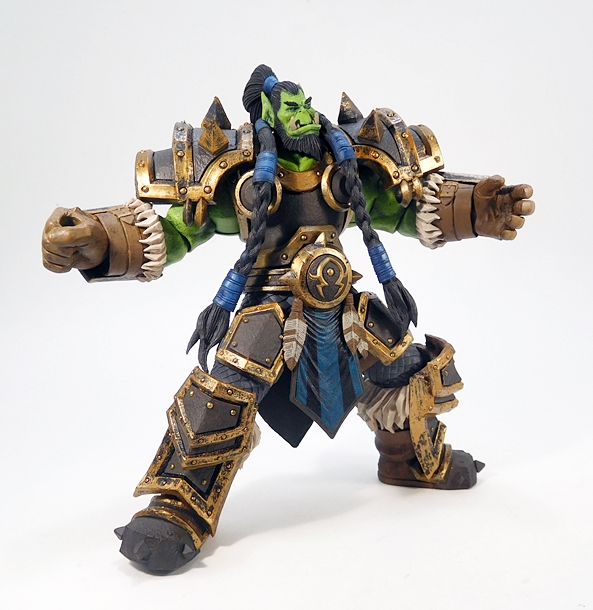 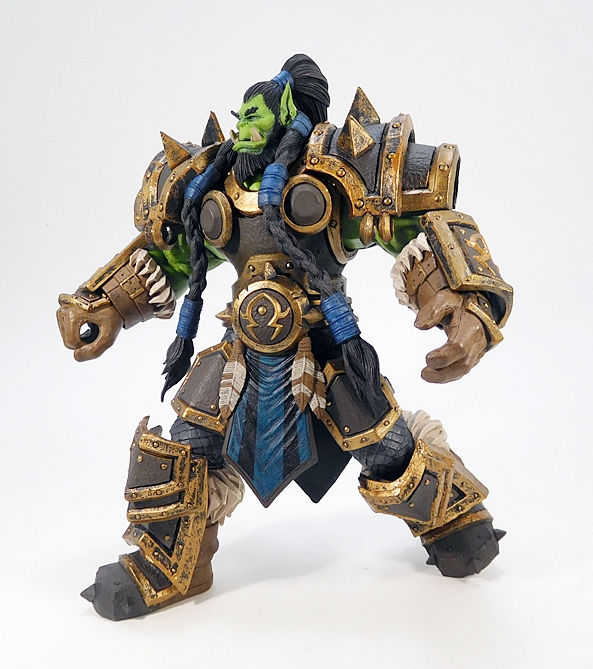 With plenty of rotating hinges throughout the figure, Thrall features a respectable amount of articulation and all of those points do the best they can against a design that is not by nature intended to be limber. The shoulders threatened to be the biggest impediment, but they are designed to be flexible and lift up to allow for a fairly good range of arm movement. The elbows are a lot more restrictive. Still, all in all I’m quite pleased with the posability in this figure. 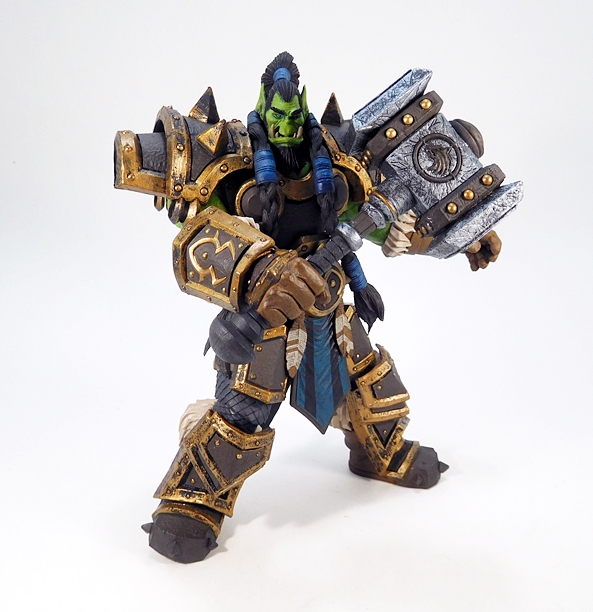 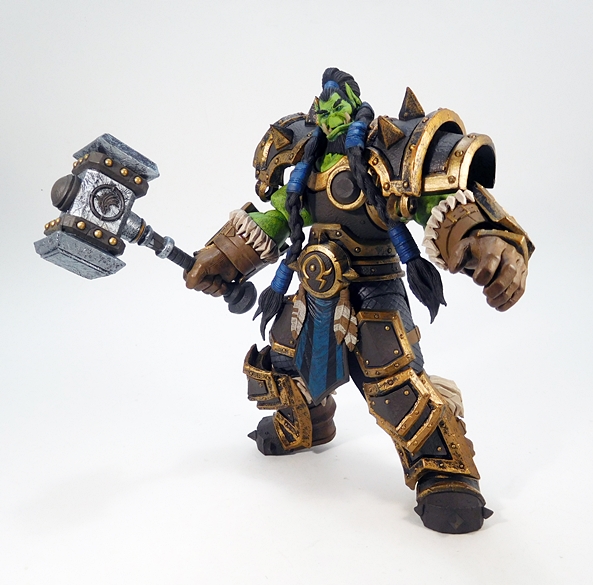 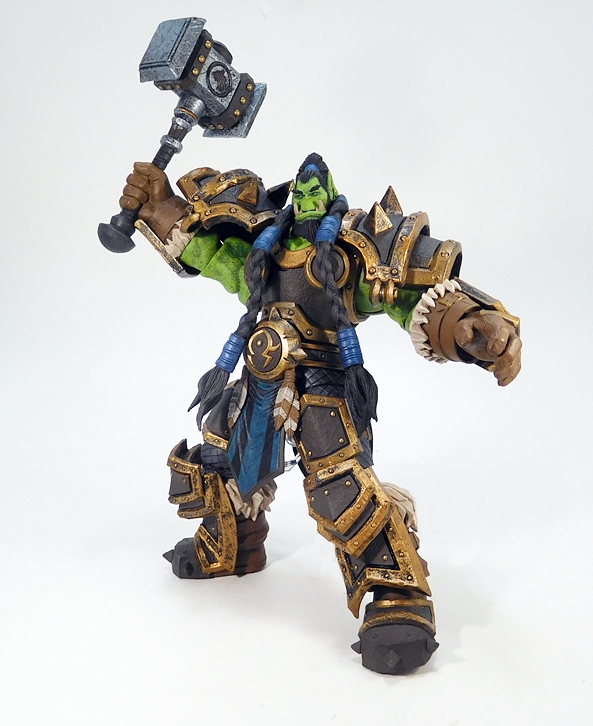 Thrall includes one accessory, and that’s Doomhammer. The hammer actually comes in two pieces, allowing you to pass the shaft of the handle up through the bottom of his closed right grip and then peg in the head of the hammer. It works well and gives him an infallible grasp on the weapon. Although, he can actually hold it in his left hand as well, just not as securely. It’s a heavy and bulky chunk of plastic, with all the same great level of paint and detail that is exhibited in the figure. And damn does it look great in his hand! 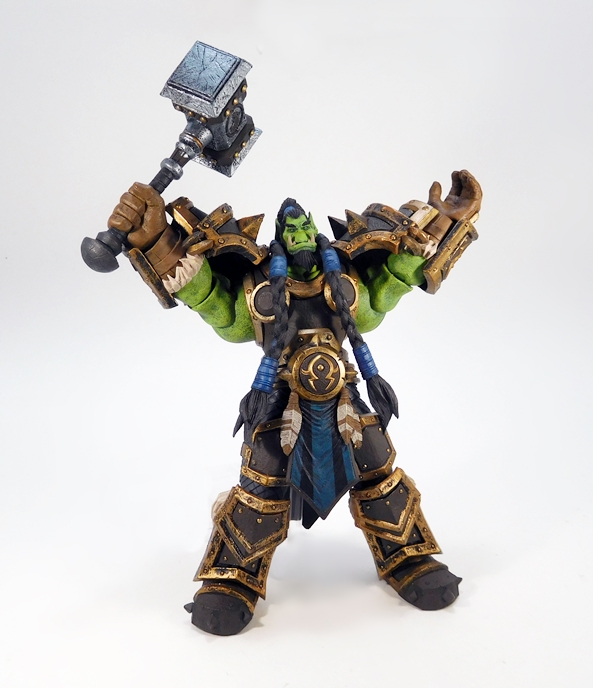 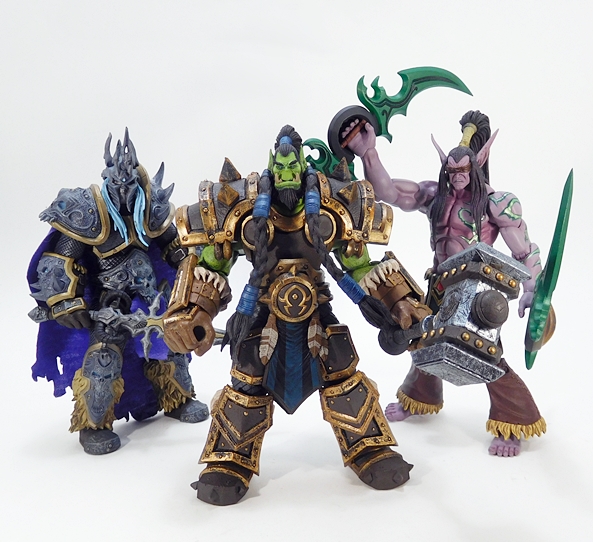 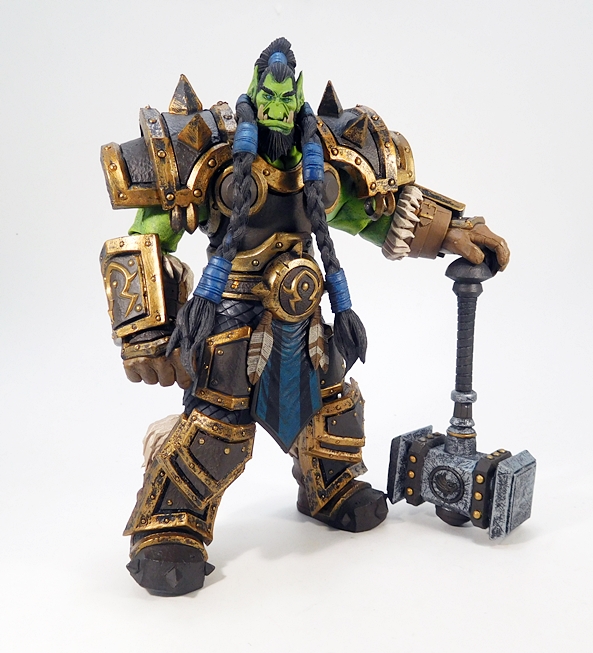 At this point it’s safe to say that, Blizzard’s art design and NECA go together like PB&J, which makes it all the sadder that this line is dying and NECA isn’t going to be doing Overwatch figures. Yeah, I was really hoping for that to happen. But rather than end this review under a cloud of doom and gloom, let’s just revel in what we’ve got. Thrall is a fantastic figure, which exhibits all the passion and craftsmanship that NECA pours into the licenses they work on. The coloring and complexity of sculpt bring this figure to life and make him look like he just stepped off the screen. He’ll likely be spending a while sitting on my desk, so that I can keep glancing over and admiring him, before joining his friends on the shelf. Thrall is available now at NECA retailers for around twenty bucks.