So, if you haven’t guessed by now, I’ve been using Mattel’s ho-hum Multiverse line as filler for DC Fridays as I await some better stuff to come in. I should have something next week for sure. In the meantime, I’ve picked up a couple waves of these figures for stupid cheap and I’ve been trudging through the Doomsday Wave. Today I’m doubling up with a look at both Batman and Robin from Frank Miller’s The Dark Knight Returns. I was actually looking forward to these figures and hoping they would be the breakouts of the wave. Turns out those were lofty and unfulfilled hopes. Let’s have a look… 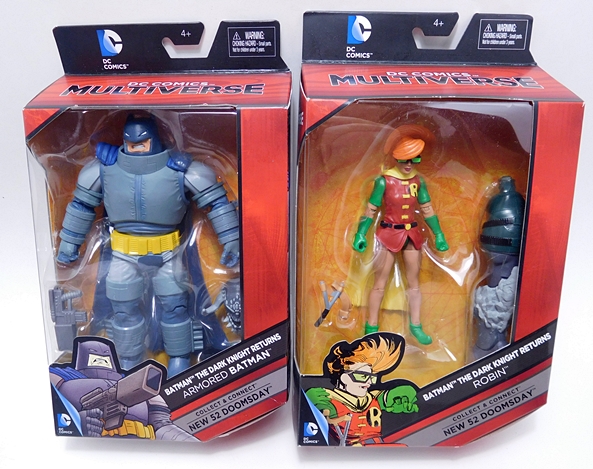 The figures come in window boxes and are collector friendly. They’re not ugly, they’re not great, they just are. Sometimes I’m sad about tossing packaging, but in this case, I don’t really care. There’s some nice character art on the side panels, and you get a little blurb about each character too. Let’s start with Batman… 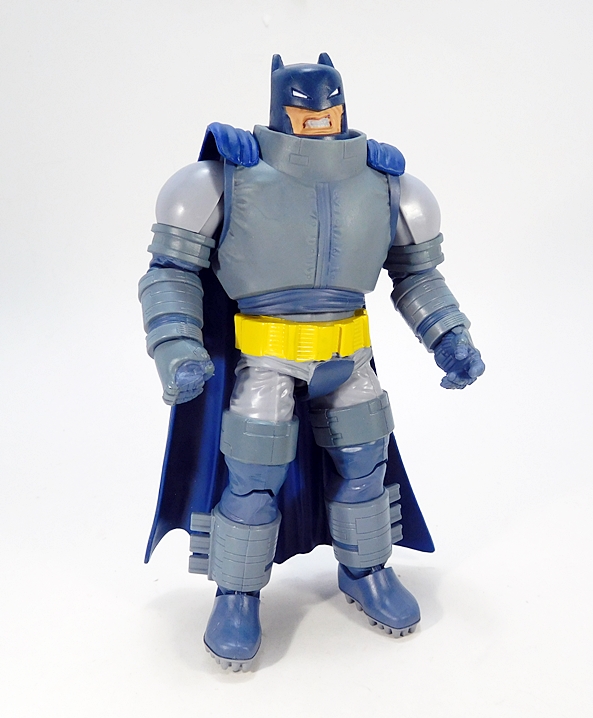 So, my first thought here is that the figure looks drab and unfinished and I proscribe that to the lack of paint. I suppose you could argue that they’re going for a comic look here and the art in this particular book sure isn’t cheery. In fairness, they did attempt to add a little color diversity here and there. You get the dark gray of the armor pieces, with the lighter gray and blue of the underlying suit peeking out. Then you get the blue of the cape and cowl, and the bright yellow of the utility belt. And yet still, there’s something about the coloring on this figure that looks cheap. 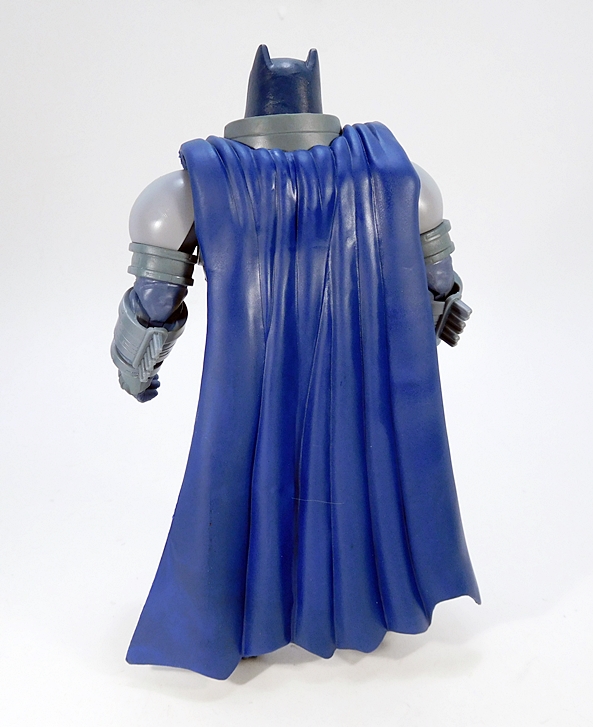 The sculpt itself is passable. I like that the chest armor is soft plastic wrapped around the buck. It adds to the bulk of the figure and also gives it a unique matte finish to contrast with the rest of the plastic. There are some little cinches and rumples sculpted in too. You get some panel lines in the armor rings, some nice ribbing and texturing on the fists, including reinforced plates on the knuckles, and best of all, you get those crazy spikes on the soles of his boots. Again, I think a lot of the reason this figure falls flat for me is the lack of paint. I’ll also point out that mine came out of the package with the right shoulder cape attachment warped so it looks like it’s pulled up.

The head sculpt isn’t terrible. It fits the style of the art. There’s some nice depth between the face and the cowl. But the paint on my figure is all chipped around the upper lip, exposing the gray plastic under it like some kind of unfortunate case of necro-herpes. For a figure with an MSRP of about $20, that level of quality control just isn’t here. 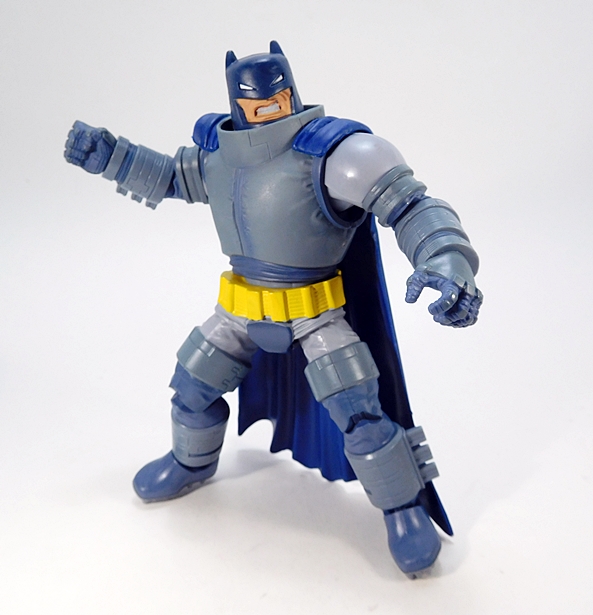 Articulation here is quite limited. That’s been a gripe of mine for the first two figures in this wave and it looks like that isn’t going to change. Once again, the problem isn’t with the points, but with the range of motion in those points. The elbows in particular have are laughably limited. In the case of this figure, I’m maybe willing to be a bit more forgiving, because he is wearing bulky armor, but it still means that this figure isn’t much fun to play with. Also, there’s a waist swivel in there, but mine is locked tight with the torso slightly turned to the right. 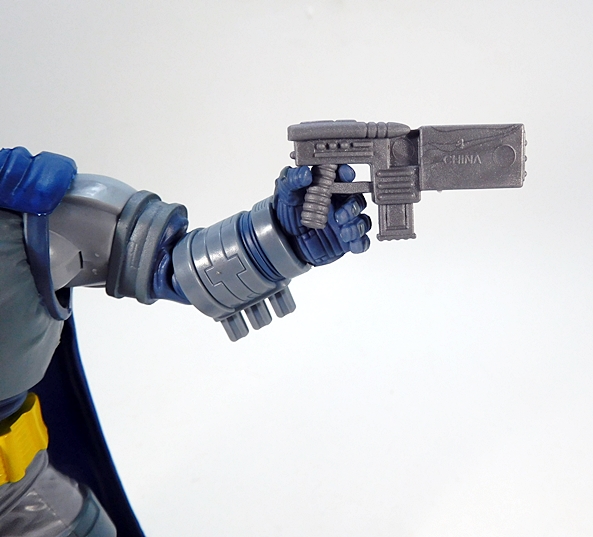 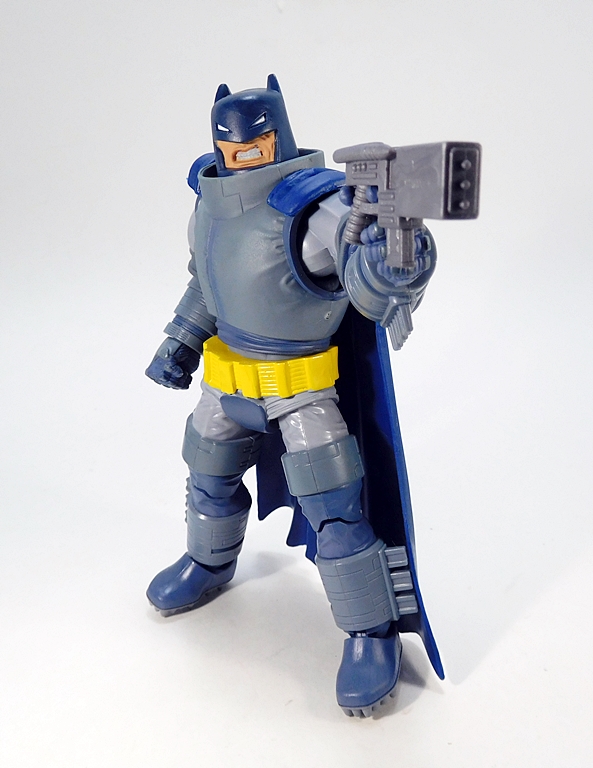 Batman comes with his EMP gun and it’s a pretty sorry excuse for an accessory. Maybe this would have been OK for a 3 3/4-inch scale weapon, but come on, Mattel. This is just embarrassing. I’ve had enough of this guy… let’s move on to Robin.

We’re still focused on TDKR here, so this is of course, Carrie Kelly. I like the scaling here, especially when you display her next to Batman, because she’s appropriately tiny. From the neck down, the sculpt isn’t half bad. Mattel actually did a decent job with the classic Robin outfit. It’s not overly encumbered with detail, but it definitely gets the job done and adheres to the art style reasonably well. I even like the coloring here. The bright red, yellow, and green really make this figure pop splendidly. Well, look at that, I had some nice things to say!

For a while I was a little torn on the head sculpt. At certain angles it doesn’t look too bad, but in the end I have to come down against it. The glasses look way too large and blocky and having them just painted over green doesn’t work for me. At this point, I realize it’s asking way too much to have clear green plastic and sculpted eyes behind them (although even Funko’s Pop! Vinyl managed to do it), but it doesn’t change the fact that what we got here looks kind of awkward. And speaking of awkward, the bottom part of the face and lips does not look like anything like a child to me. 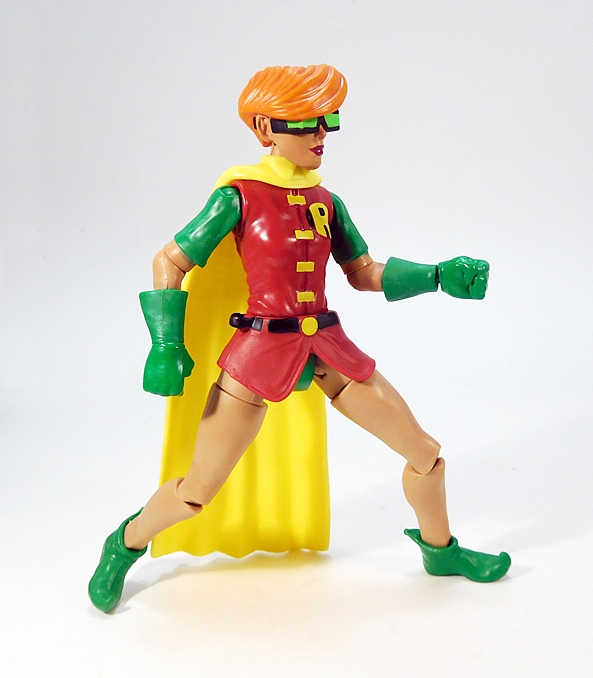 Like Batman, the articulation here sucks. Again, on paper this figure should have all it needs to work, but none of those points offer any real range of motion, except the shoulders. The hips are confined by the tunic, the elbows can barely make 90-degrees, and the ankle hinges are all but useless. I pick these figures up, fiddle with them for a few moments, get frustrated, and put them back down again.

Robin comes with her slingshot accessory, which is a good thought, but executed pretty hamhandedly. The rubber band looks like a chewed stretched piece of caramel. She can hold the slingshot in her right hand or it can get tucked into the loop on her belt, where it looks like an oversized albatross.

Goddammit, Mattel! After one disappointment (Supergirl) and one meh (Superman Doomed), I’ve was hoping to finally hit a couple of Multiverse figures that I actually liked and instead I got these. They look and feel cheap, they have horrible articulation, and Mattel should be ashamed of themselves for asking $20 a pop for these. Keep in mind, I paid eight bucks for each of these and I’m still not satisfied. These are giant leaps backwards from the days of DC Universe Classics, a line that Mattel killed many years back so that they could, what… work on developing this garbage? OK, I still have two more figures in this wave to review before I can put together Doomsday, but I feel like I’m really bumming out DC Fridays with this crap, so next week I’m going determined to cleanse the pallet with something decent.