It’s just another Marvel Monday, and that’s my fun day! At least this one is, because I have the day off and I’m spending the morning drinking coffee and opening up some action figures. Today I’m checking out my third figure in this wave, Shatterstar, and I’ll be back later tonight with a look at Dazzler!

A lot of this wave I wound up buying loose from a buddy online, but Shatterstar was pretty easy to find, so here’s a packaged shot. I was a big fan of X-Force way back when even to the point of buying some of the Toy Biz figures at a time before I got back into buying toys and was only really collecting Playmates Star Trek figures. I never even opened any of those X-Force figures. I just hung them on my wall and admired them in all their garishly colored beauty. Shatterstar was one of my favorites, so naturally I’m thrilled to see him turn up in this wave. 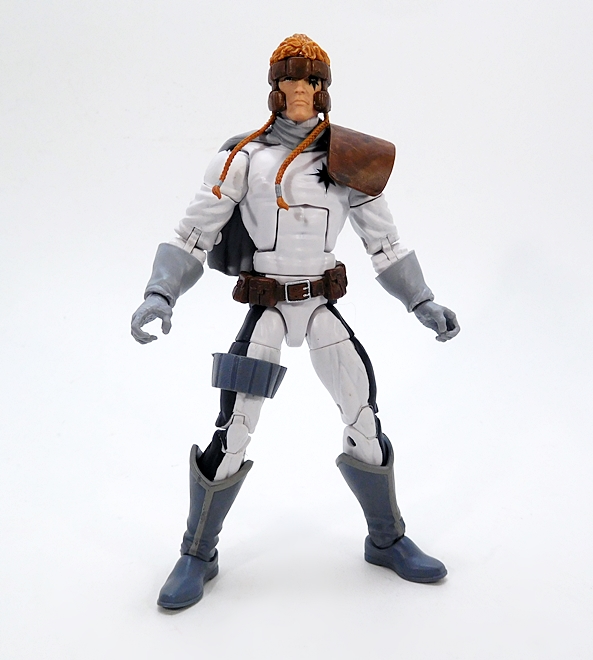 And here we are, Shatterstar in all his 90’s comic design glory. Giant shoulder pad? Check! Bitchin’ half cape? Got it! Meaty, extra-thick, pointless thigh strap? Of course! Pouches? Um… sorta? He’s got a nice brace of pouches running around his sculpted belt, but honestly, there’s plenty of room for more. All these wonderful 90’s trappings feature original sculpted parts and are tied together with a pair of buccaneer gauntlets and some truly epic flared boots. The underlying, mostly white, buck features wide black stripes down the outer legs and his star pattern printed in black and partially obscured by his mega-shoulder-pad. All the original sculpting looks great. I love the little folds and rumples in his cape and the shoulder pad and belt have a worn leathery look to them. Even the belt buckle is painted silver. When all is said and done, this is a great looking figure!

And the portrait is no slouch either. The facial features are well designed, and he has the star tatt over his left eye. It’s a little tough to see the eyes when looking straight at him because that padded half-helmet sits low and casts a shadow over his peepers. Nonetheless, I love how the top-less helmet looks like it’s sculpted from an entirely separate piece. It matches the weathered leather look of the belt and shoulder pad, almost like an old timey rugby helmet. Also the hair looks great, complete with his trademark snaking ponytail and the twin braided pigtails that hang down the front, which must have been all the rage back on MojoWorld. 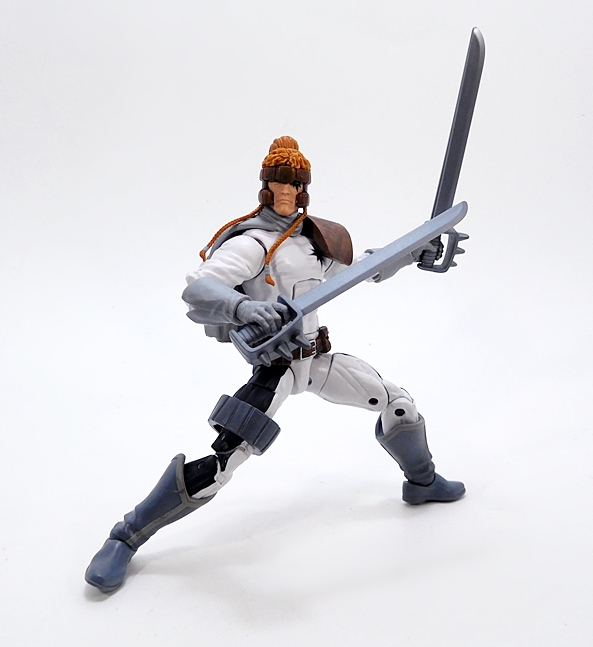 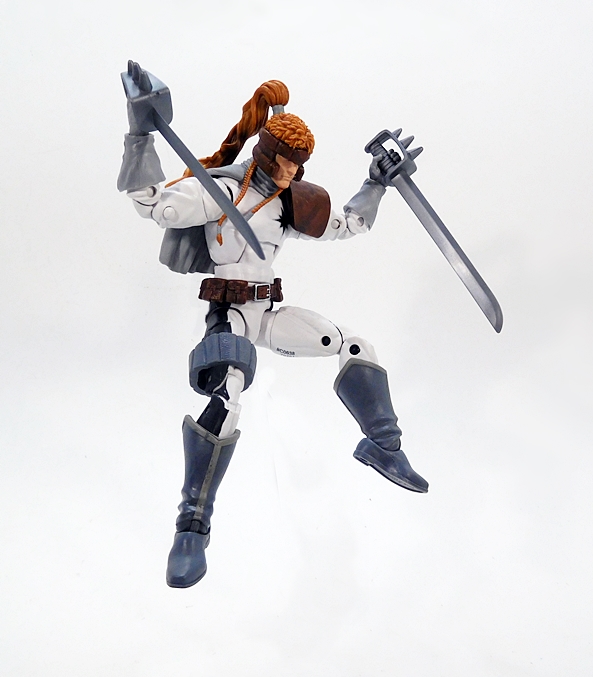 The articulation here is superb. The arms feature rotating hinges in the shoulders and wrists, double hinges in the elbows, and swivel cuts in the biceps. The legs are ball jointed in the hips, have double hinges in the knees, as well as swivels in the upper thighs and hidden under the boots. The ankles are hinged and have lateral rockers. The torso features an ab crunch hinge, a waist swivel, and the neck is both hinged and ball jointed. The only issue I have here is the hips on my figure are really loose. Going to have to address that with a little floor polish. 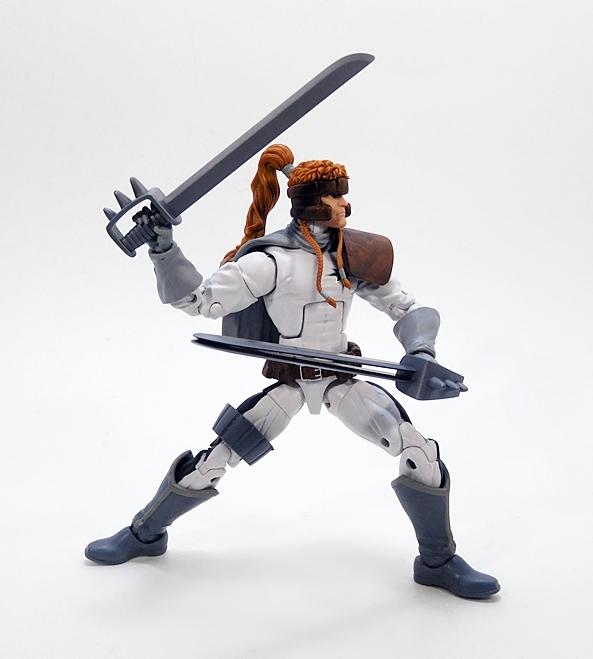 Shatterstar includes his distinctive swords, and I have always loved these things! They’re both cast in the same matte gray plastic. Some paint apps on the hilts would have been cool, but they still look fine. One features a twin blade and the other a single blade. Both have those kick-ass spiked knuckle guards. 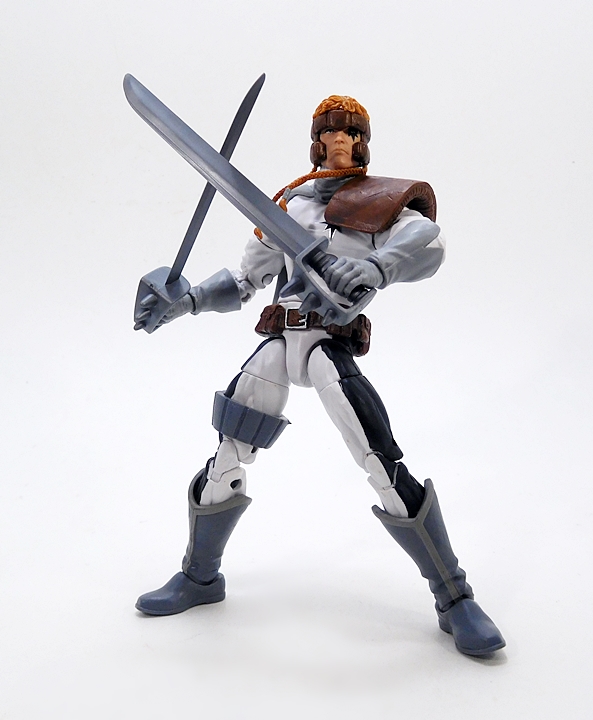 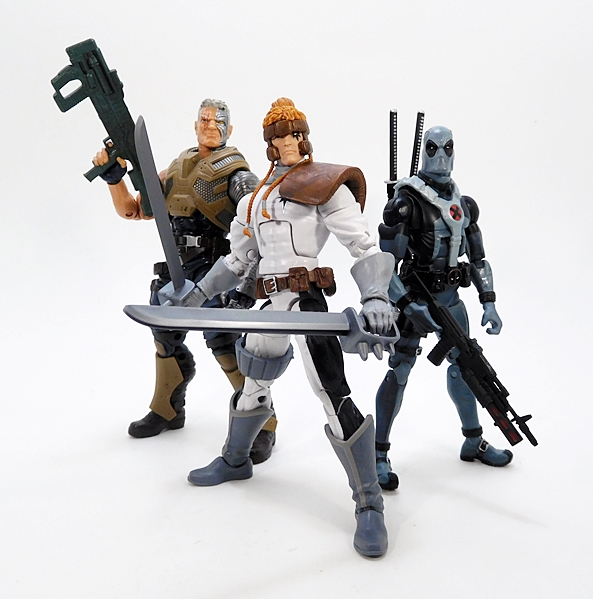 While I haven’t encountered Shatterstar in my funnybook readings in a very long time, the nostalgia I have for this character makes him a most welcome addition to my X-Force roster. Everything on this figure just comes together perfectly and I’ve had him on my desk for quite a few days so that I could play around with him on my down time. I’m still pretty early into this wave, but it’s possible that Shatterstar could turn out to be my favorite in this assortment, but he’s going to have some stiff competition. Come on back tonight and we’ll have a look at Dazzler!