I’ve been slowly working my way through the TPB releases of DC ReBirth and having a great time. So far nearly all the books have been enjoyable, but the one that totally took me by surprise was Aquaman. Great story, great characterizations, and beautiful art and coloring. It’s also one that beautifully captures what a badass Black Manta can be. So much so, that I had to go back and pick up his action figure from the DC Super-Villains line. And this is a particularly pertinent review as with Irma bearing down on me in a couple days, I may soon be under water! Yeah… let’s check him out!

I’ve reviewed several of the DC Super-Villains series, so the packaging offers no surprises. The figure comes in a mostly black window box with a swipe colored to match part of the character’s deco. In this case the red of Manta’s eyes. The box also includes an extended back flap with a J-hook so it can be displayed standing on a shelf or hanging on the wall. The window shows off the figure very well and everything here is collector friendly. 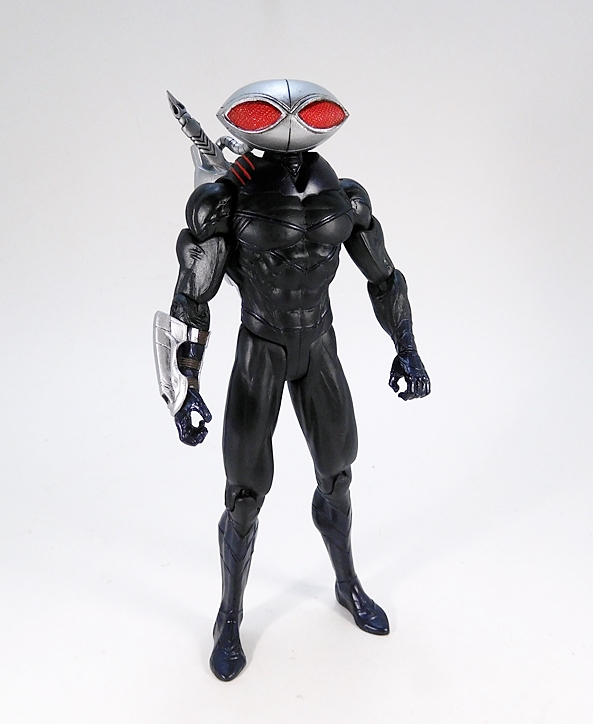 Out of the box, Black Manta looks absolutely fantastic. By nature, his design is fairly minimalist when it comes to color and details, but DCC still packed a great amount of love into him. The nearly all matte black body suit features some rather subtle panel lining around the chest and there’s some nice musculature sculpted in a swell. The neck guard, boots and gauntlets are painted with a glossy finish, which can look black or purple depending on how the light hits it. He also features the red gill-like slashes on either side of the suits neck-guard. All in all, this figure captures the look of the suit perfectly.

The only other detail of note on the suit is his right gauntlet, used to fire his energy beams or micro torpedoes. It’s a great sculpt and features some nice silver paint.

From the back, Manta is wearing his jetpack/backpack, which is painted in the same silver as his gauntlet. The backpack not only serves to propel him in water, but in this case also stores his extra weapons, which I’ll touch on in just a bit.

My favorite thing about Black Manta’s look has always been his squat, bulbous helmet and it looks fantastic on this figure. The red paint and texture on the giant buggy eyes is particularly well done. The back of the head connects to the backpack with two soft plastic hoses. They do allow for neck movement, but sometimes have a habit of bringing the head back to the center position.

Articulation on the Super-Villains line isn’t the best and mostly adheres to the standards set by DCC’s earlier “New 52” style figures. The biggest restriction here is in the hips, where we get a disappointing t-crotch as opposed to ball jointed hips. The arms are overall decent, with rotating hinges in the shoulders, swivels in the biceps, hinges in the elbows, and swivels in the wrists. The legs feature hinges in the knees, but no articulation in the ankles, and no swivels in the thighs. There’s no articulation in the torso at all, and the neck is ball jointed. There’s still some fun to be had here, but for the most part, Black Manta is designed to stand on the shelf and look menacing. 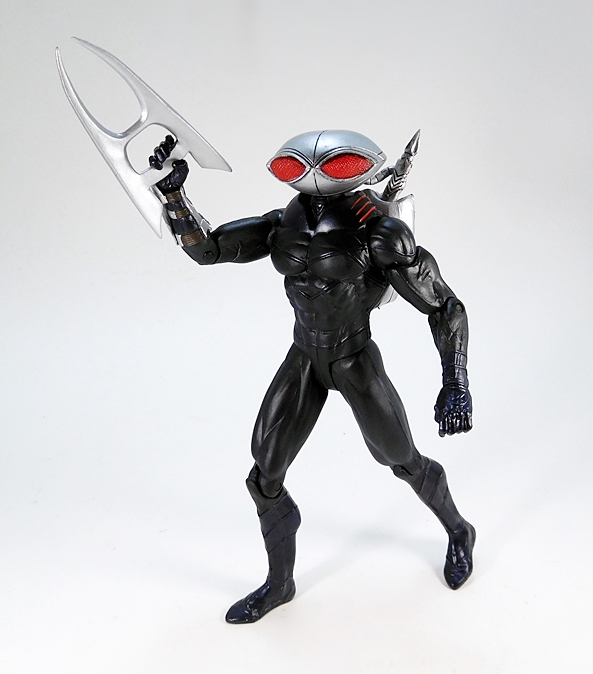 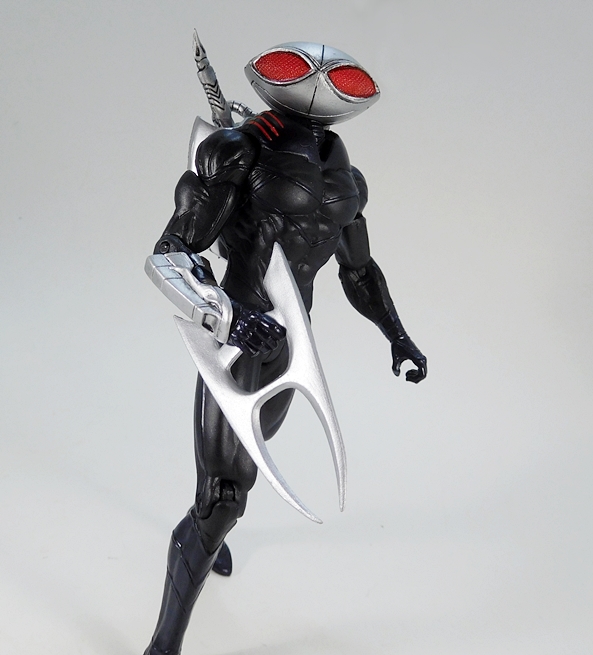 What Manta lacks in articulation he makes up for with accessories. First off, he has what is sometimes called his hand-trident, although two blades does not a trident make. This is a simple weapon, but looks great in either hand and is stored by clipping it to the center of the backpack. 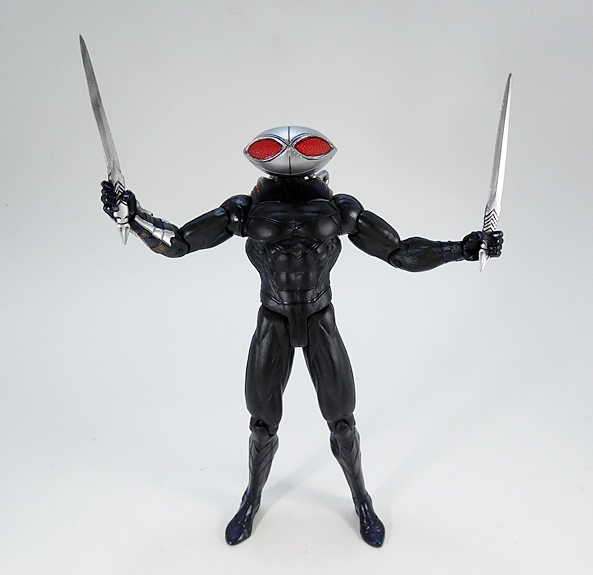 The other weapons are twin short-swords, and these aren’t really shown off in the package as they come sheathed in the backpack. Again, these are fairly simple, although they do have some detailing on the grips. 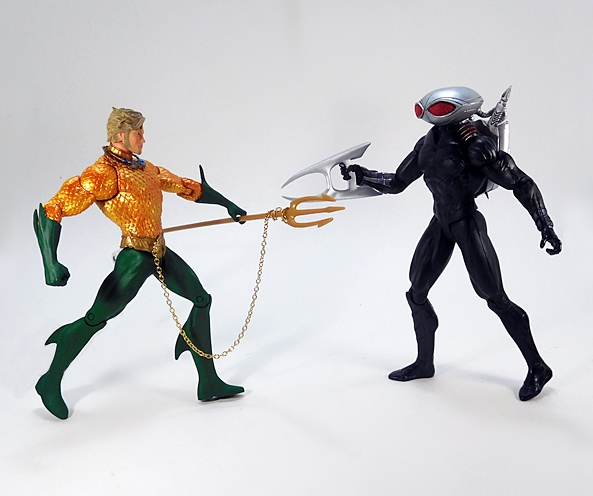 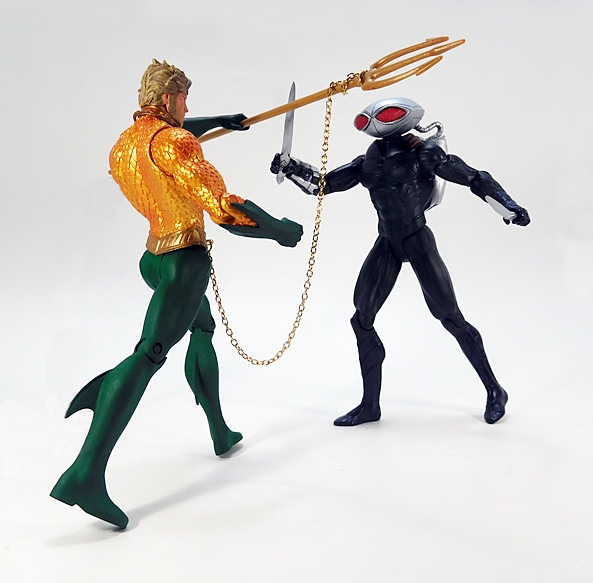 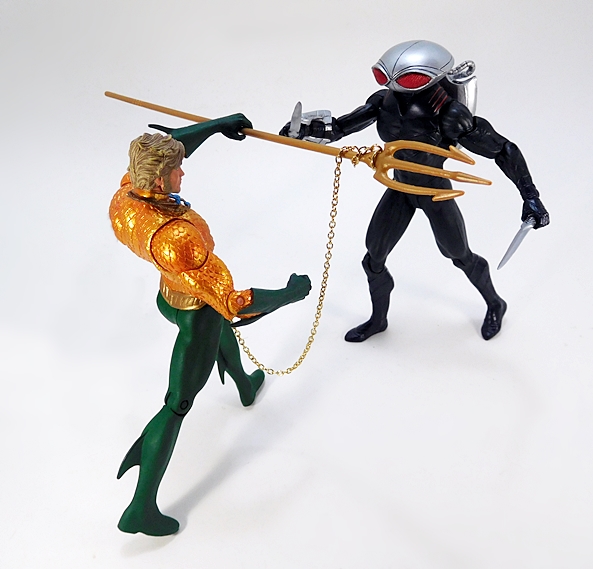 For the most part, the Super-Villains line has been one that I pick up when I find the figures at decent discounts, so rarely have I ever paid the full $20 that these are intended to sell for. Black Manta would have been an exception, as I went hunting for him after reading just a the first few issues of Aquaman ReBirth. To my surprise, he was already going for pretty cheap, and I was able to grab him for about $12. He looks great, and the accessories are a welcome treat that you don’t often see with this line, but the fairly limited articulation dampens (HA!) the fun a little bit. Still, I’m certainly glad I got him, as he displays beautifully with the Aquaman from my “We Can Be Heroes” Justice League set.