The folks at Boss Fight Studios have followed up their Greek Mythology based Series 1 of Vitruvian HACKS with a Medieval-Fantasy based second series. I’ve reviewed quite a few figures from the original series (with still more to look at eventually… I’ll get to them!) and I’ve been very pleased with all of them. There was never any doubt that I would be diving into Series 2, even though my fantasy figure heart has been forever stolen away by The Four Horsemen’s Mythic Legions. Hey, there’s always room for more, right? And as it turns out, each of these lines of figures have their own charms. I’ve picked up the first wave of four figures, as well as one of the two exclusives, so let’s start out with the heroic Knight of Accord! There’s a lot to talk about, so hang on tight!

I’m delighted to see that they haven’t changed the package design. The figure comes on a landscape-style card with plastic covering the front, which will display beautifully right alongside all my Series 1 figures. It’s also totally collector friendly, as all you have to do is bend the edges of the plastic up and slide out the card to get to the figure. And don’t let the small bubble fool you, there are two nested trays and a ton of stuff packed in there with this 4-inch figure. 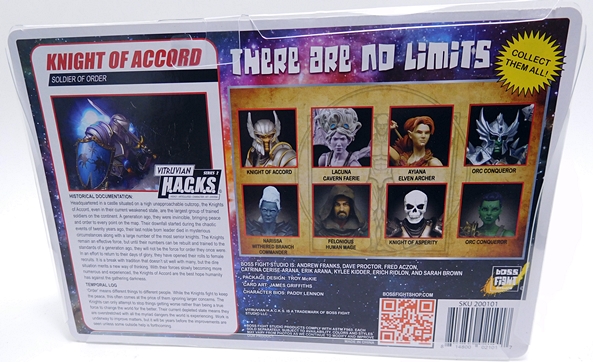 The back of the card has a little blurb about the Knights of Accord. Note that this isn’t a specific character and we’ll soon see he can be many different characters. The cardback also shows off the other figures in Series 1 as well as the Series 2 figures, which should be coming soon. 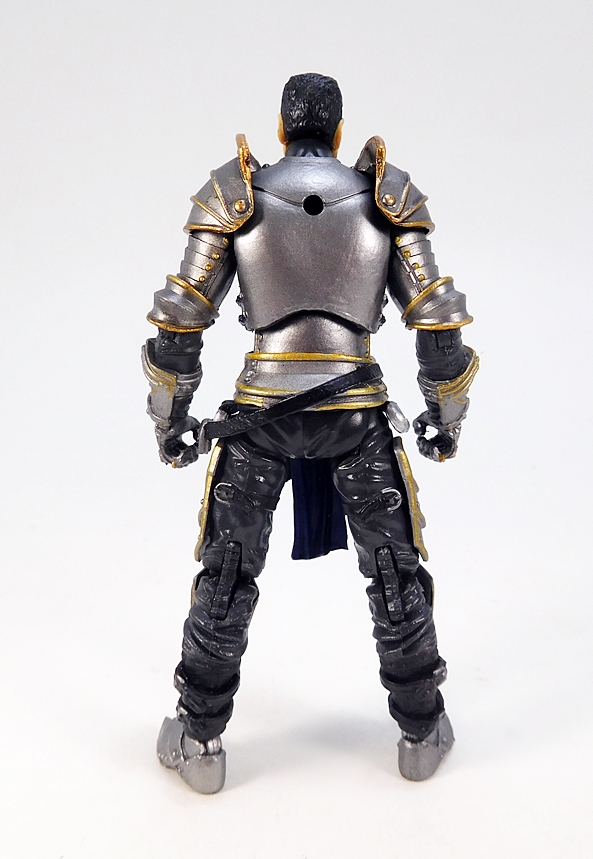 The Knight uses a brand new buck, which is a mix of sculpted armor and clothing. Some of the armor is still removable, like the thigh plates and the grieves. The shoulder pieces also come detached from the figure and have to be pegged into the shoulders. This figure is a pretty big departure from Series 1, which used completely nude bucks with all the armor separate, but given the new time period, it’s certainly understandable that they went this route. The attention to detail is pretty spectacular when you consider the scale. Segmented plates and tiny rivets are all part of the sculpt, as are the straps that are meant to hold on the plates. And those rivets, as well as the reinforced edges of the armor, are painted bronze. I don’t think there’s ever been a better example of an armored knight in this scale. The name of the game here is customization, and the idea is that you can get a bunch of these figures and tweak them all to make up a squad of different characters. To further that end, BFS has included three different heads with the Knight. 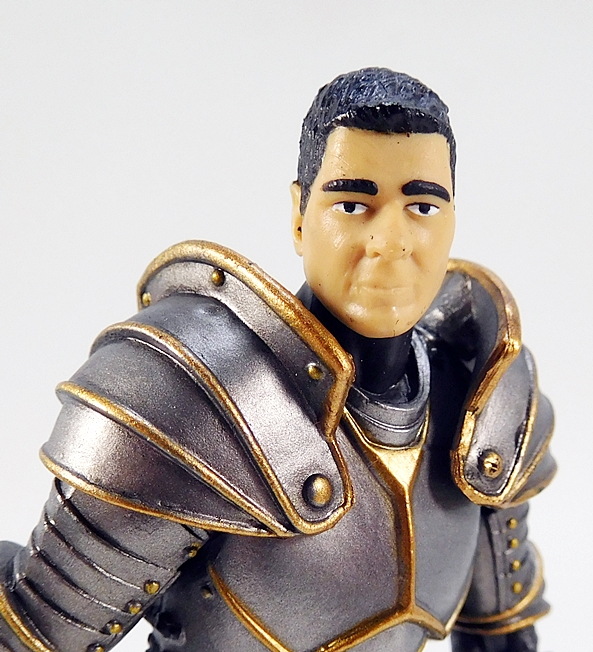 Each of the heads come on their own bar-bell ball joint and these noggins are a bit of a mixed bag. OK, none of them are terrible, but overall I’m more partial to the head sculpts we got with Series 1. That stock head, for example, sure got an extra helping of eyebrows! Who is this, Sir Eugene Levy? The second head is my favorite. I think it’s the best overall sculpt and the beard makes him look distinguished. The final head is OK, but looks a little lumpy. Keep in mind, as with most 4-inch figures, they don’t hold up all that well to close scrutiny via the camera lens. Truth be told, they all look fine to me when viewed with my naked peepers. Well, except for that first head… his eyebrows are still huge! Are three heads not enough to customize your Knights? Well, let’s talk helmets… 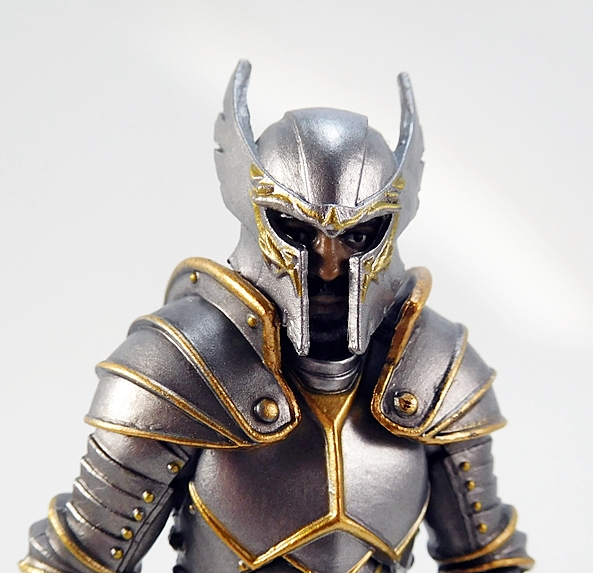 First off, you get this stand-alone helmet, which looks great and fits the heads perfectly. I really have to give BFS credit in that both Series 1 and Series 2 have had some of the most impressive helmets I’ve ever seen in this scale. I love the sweeping curves of the horned crest and the extra sculpted detail around the visor, which is also painted gold to match the paint accents of the armor. The helmet fits so well that the eyes actually line up with the visor holes. So cool!

You also get an open-faced helmet with pegs on the side and it’s designed to work with three different visors. The problem is the visors don’t peg into the helmet very well at all. I’m afraid to force them at the risk of tearing the hole in the visor itself. Two of them do, however, clip on fairly well with just friction holding them in place and can even still be opened and closed without them falling off. It’s not the way these were intended to be used, but it’s the only way that I can really get them to work. The one up top is my favorite. 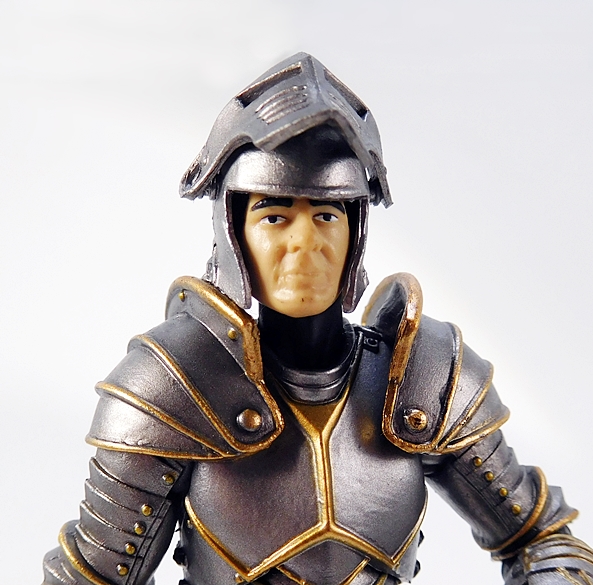 But this one is pretty cool too! What about the third? It doesn’t work. I’d have to actually peg it onto the helmet to make it stay put and as I said, I’m not willing to risk it. But even with three heads, two visored helmets, and the other helmet, you’ve got plenty of options to mix and match and create a little army of Knights. 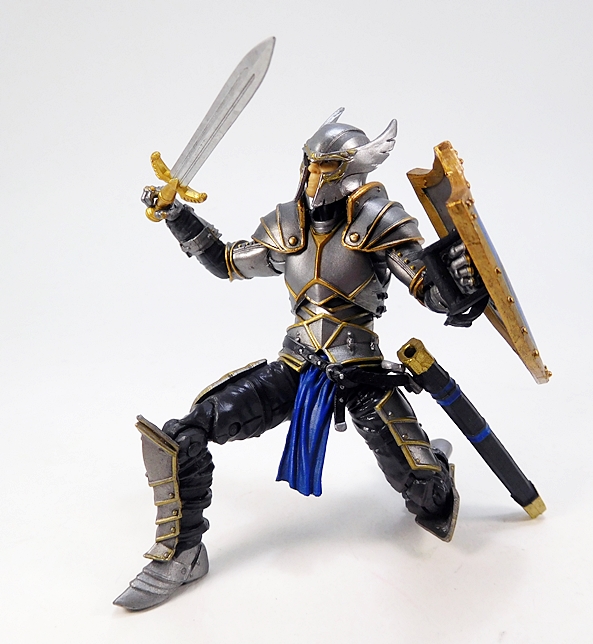 The articulation is virtually identical to the Series 1 humanoids, so let’s run through it real quick. The arms have rotating hinges in the shoulders and elbows, with hinged pegs for the wrists. The legs are ball jointed at the hips, double hinged at the knees, and hinged at the ankles. There’s a ball joint in the torso between the waist and chest, and as mentioned the neck is a double ball joint. The absence of things like lateral rockers in the ankles and swivels in the thighs do hold this Knight back a bit. Also, the legs feel a tad mushy, which was an issue I had with some of my Series 1 figures. So, not perfect, but still pretty damn solid, and I’d say that overall he’s probably more poseable than he should be wearing all that plate armor. 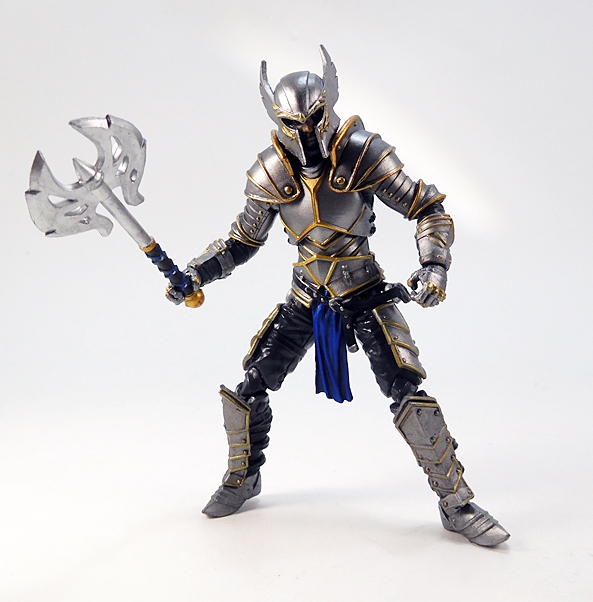 As for weapons, you get a couple of choices here as well. For starters, The Knight comes with this pretty cool double-headed battleaxe. It’s a very ornate weapon and includes a highly stylized head with cut-outs in the blades. The grip is sculpted and painted with black, gold, and blue. It’s designed to be wielded with one or both hands, and the articulation does allow for either.

Next up, he comes with a broadsword and scabbard. The scabbard can peg into the hole on the strap coming off the left side of his belt. It’s a bit of work to get it in there, but unlike the visors, I was able to make this work. There is also a ring on each side of his breastplate, which can hold the scabbard. Functional holsters for guns usually impress me in 4-inch figures, so as you can imagine, I’m practically losing my mind over a functional sword scabbard. Not that we didn’t see them in Series 1 also. The scabbard is painted black with some blue straps and a gold throat and tip.

The sword features a golden hilt with an up-swept crossguard and a stout blade. No bendy plastic here. This thing will go right in your eyeball and keep itself straight while doing it! Like the axe, the sword’s grip is designed to be wielded in either or both hands. It is, however, a bit of a tight fit in the scabbard. It’ll go all the way in, but then getting out requires a bit of force. 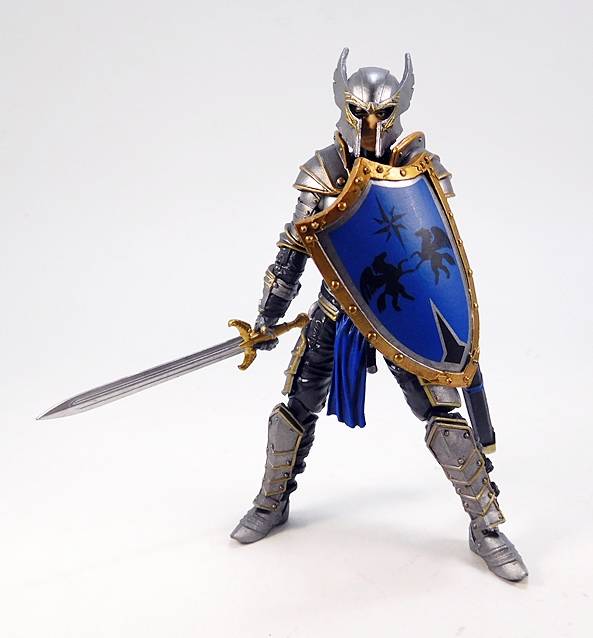 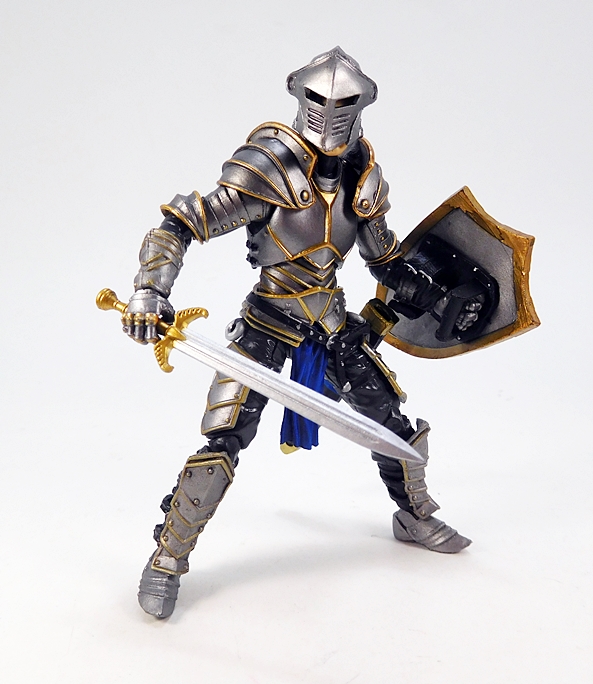 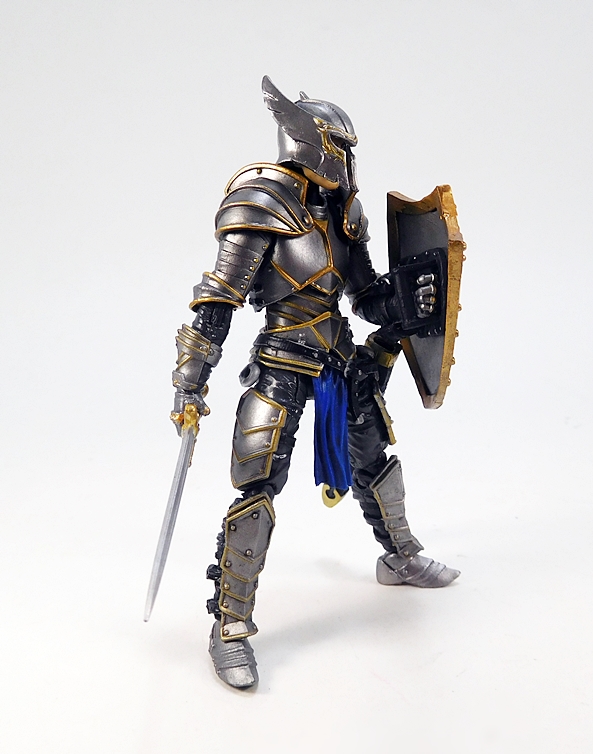 The final accessory in the Knight’s inventory is his shield. I believe this is an example of what scholars call a “heater” shield. It’s a pretty classical design with a heavy border framing its heraldic crest. There are sculpted rivets around the border and the grip features a soft sleeve that hugs the figure’s forearm and a grip. It’s kind of tough getting the grip into his hand, but even without putting the grip in there, he can still hold it convincingly. The sleeve will do most of the work. 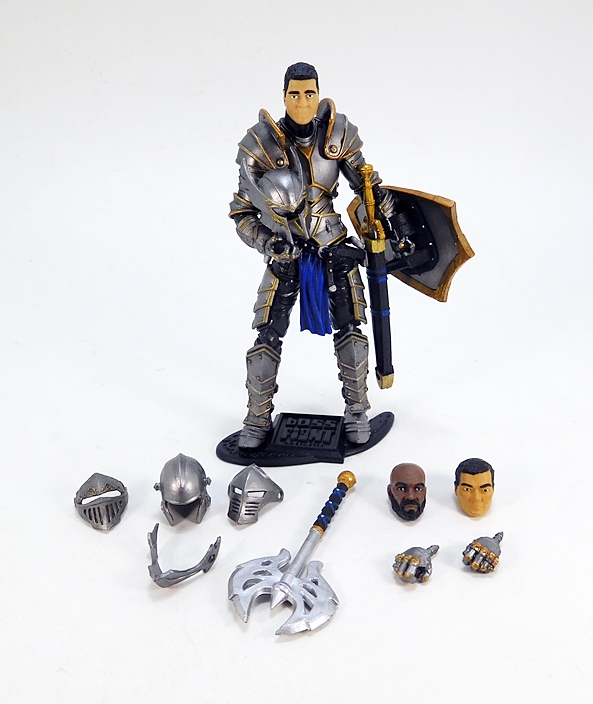 There are a few extra goodies that I haven’t mentioned yet. The Knight comes with a second pair of hands, in this case the hinges are designed to move the hand forward and backward, rather than up and down. It’s the same thing BFS did with their Series 1 figures, and while the distinction might seem subtle, it’s nice for when you want to have your figure pointing his sword forward. And you also get the standard Boss Fight Studios action figure stand. The figure’s feet peg into one or both of the pegs. It’s exactly the same as the stands that came with Series 1.

If anyone was wondering whether Vitruvian HACKS Series 1 was a case of lightning in a bottle, I would urge them to play around with this figure. And as amazing as this individual figure is, I’m most intrigued by the mix-and-match design. The original HACKS series was designed with customizers in mind, but I felt that accessing it required actual customizing skills, which I sadly do not possess in spades. This time around, it feels like it’s been made far more accessible right out of the package by just swapping out heads and helmet styles. It would have been cool if the sash on the belt could have been swapped out for a different color, but then again I think they’ve done plenty. 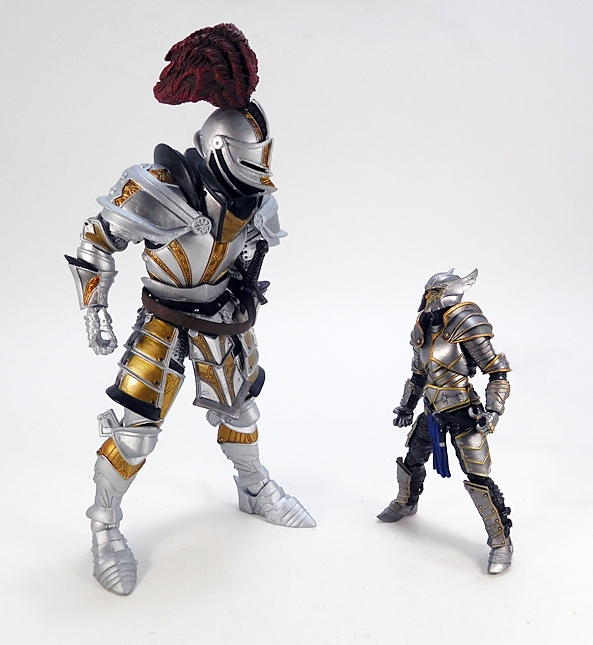 The Series 2 figures are selling for $25 a pop on the Boss Fight Studios webstore and yeah, that’s a good chunk of change for a 4-inch figure, unless you’re used to buying GI JOEs from that club. It’s also about five bucks more than most of the Series 1 figures were. I’ll concede the price here feels high, especially when compared to roughly $30 average for a Mythic Legions figure, but at the same time, it’s easy for me to see where the money went. This is an exceptional figure with all new tooling and sculpting and plenty of extras thrown in. And the fact that I’m not only all in so far with these, but I’ll also likely buy at least one more Accord Knight, should prove that I’m very happy with my purchase.

2 comments on “Vitruvian HACKS (Series 2): Knight of Accord by Boss Fight Studios”