I didn’t think I was going to make it back for a Marvel Monday Double Feature tonight, but I ultimately decided that I could polish off the second half of the “Sinister Villains” without needing too much time. Besides, if I’m going to get through this wave and into the Gladiator Hulk Wave before Thor: Ragnarok hits theaters, I’ve got to get busy on these reviews. So, let’s take a gander at Lonnie Lincoln, aka Tombstone! 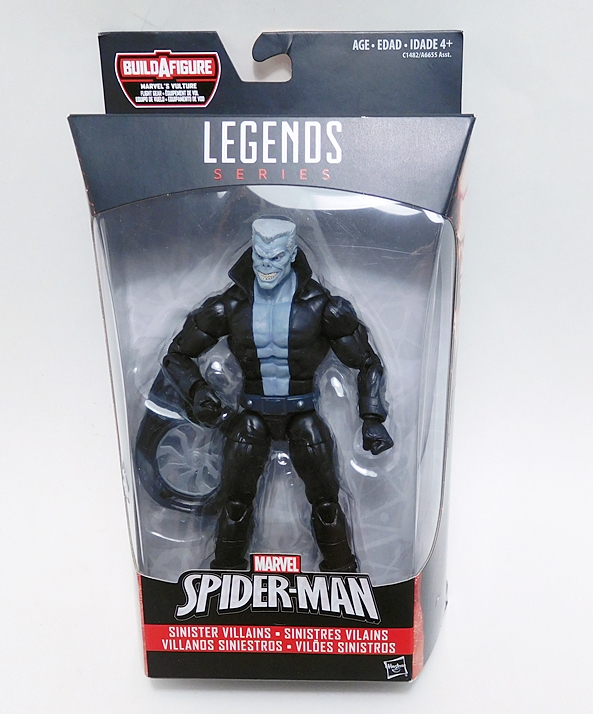 The package is identical to what we saw this morning with The Beetle. This time there isn’t quite as much packed into the tray, just the figure and the Vulture Wing part. Also, to get in the mood, I have a Pepperoni Tombstone Pizza in the oven that’s going to be ready in like ten minutes, so let’s get right to it. 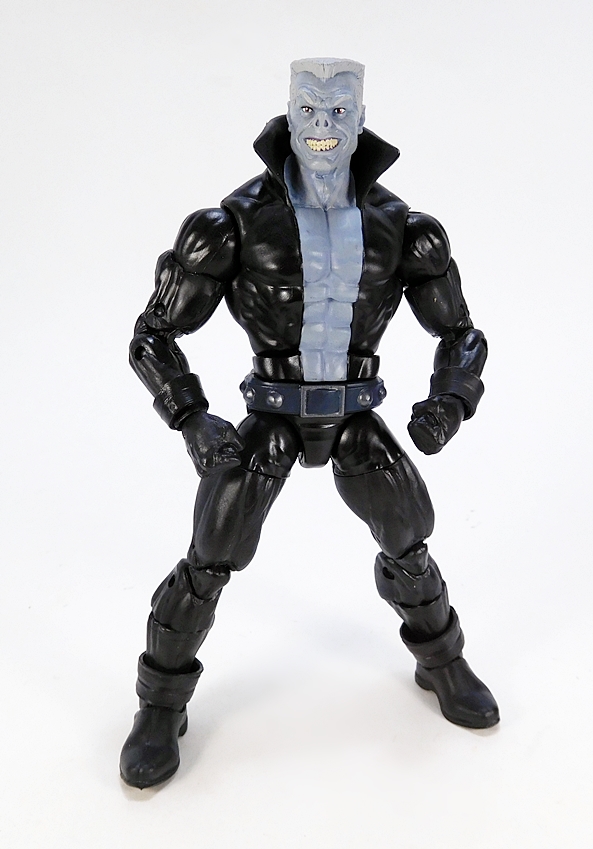 There were two directions Hasbro could have gone with this figure: Broad shouldered and business suit, or bulked out and well… whatever the hell this is he’s wearing. It is a pretty iconic look for him so either way would have worked for me, but I’m thinking this look required a little less effort in the sculpt. Indeed, while this is a pretty distinctive looking figure, it is a fairly basic one as well, and he doesn’t have the snazzy paint job that Beetle has to make that simple buck really stand out. 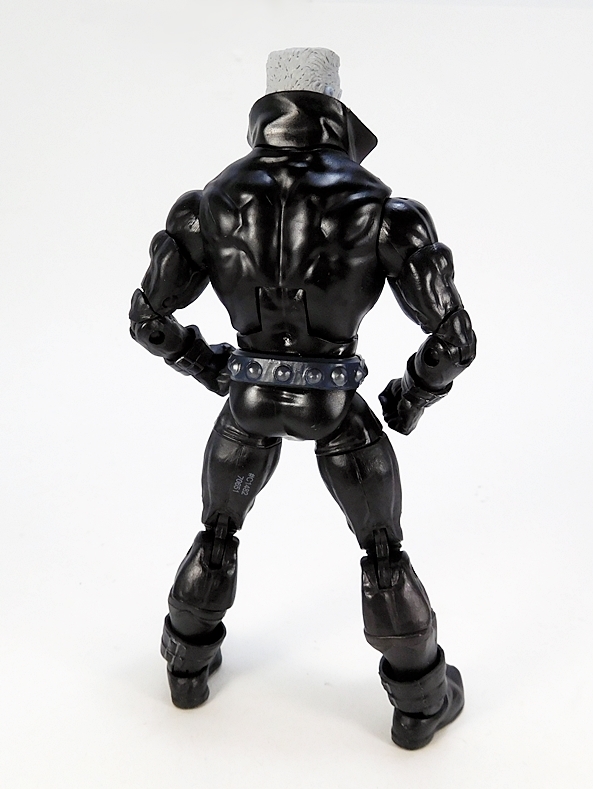 The bulk of the outfit is just matte black with a couple of loose cuffs around his ankles and wrists, also matte black. Everything is just black. Jesus, it feels like I’m talking about Hotblack Desiato’s stuntship (And if you don’t get that reference, Don’t Panic… just Google it). At least the belt breaks things up a little bit with a dark gray, a belt buckle, and some sculpted studs. I think it would have been cool if Hasbro went with the traditional soft-plastic vest with sculpted arm-sleeves look, but instead we just get some lines forming the open jacket and the ashen skin of his bare chest. Even the high collar looks like it might just be attached to the buck. I’ll admit that it looks a little cheap to me. 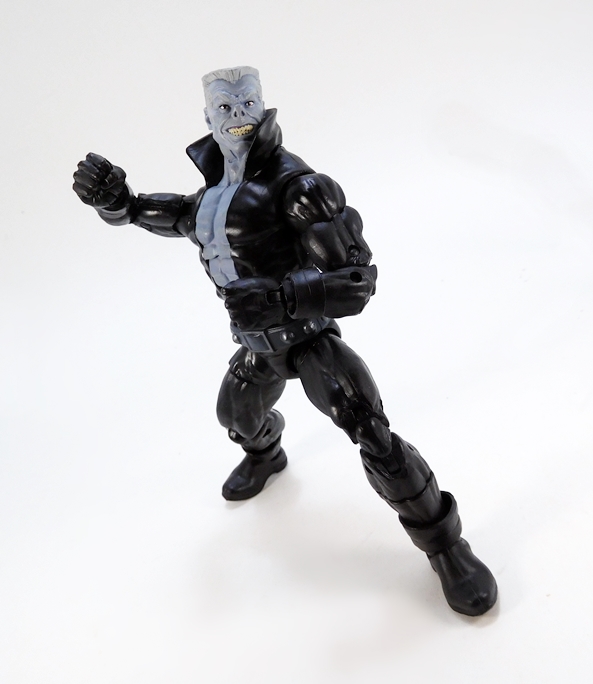 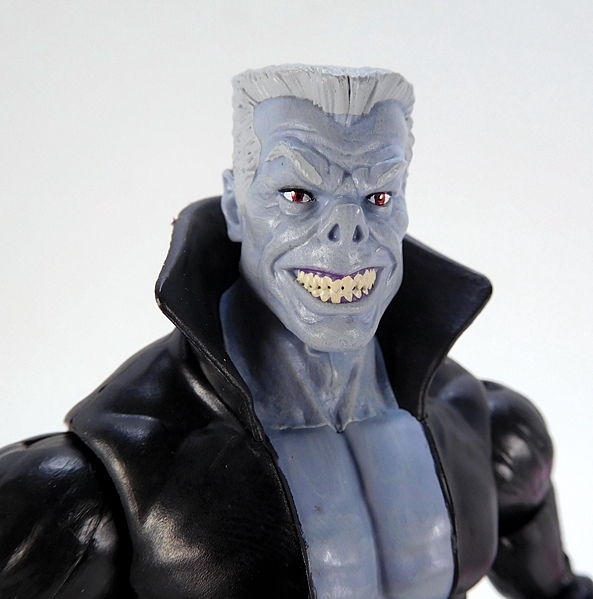 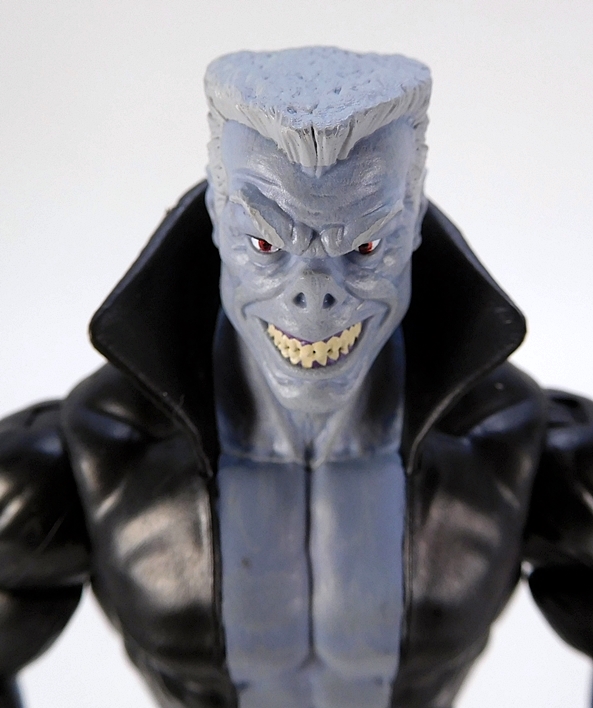 Ah, but once we get up past the neck, this is where the figure really shines. Hasbro has turned out some truly spectacular headsculpts in the modern Legends line, and Tombstone here is yet another example of that. Lonnie really is an interesting character, and this portrait captures him perfectly right down to his sharpened teeth. It really elevates this figure from an average budget-minded release in the wave to something special. 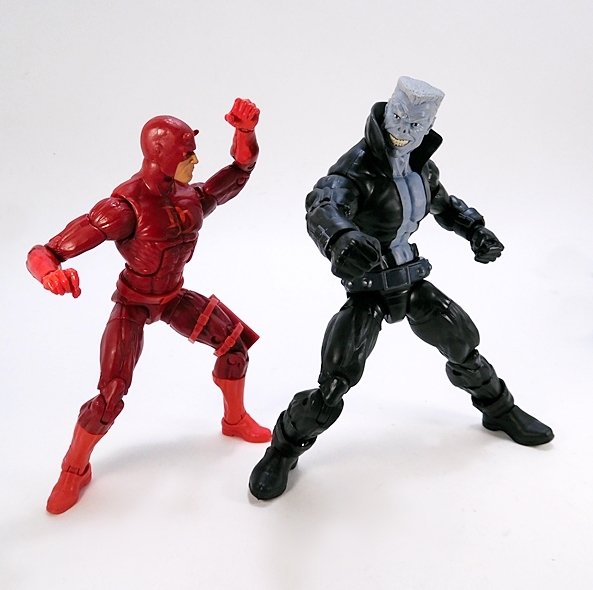 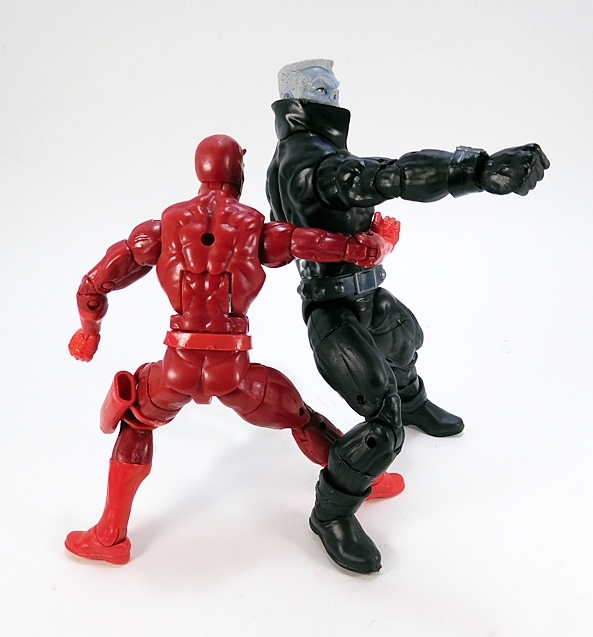 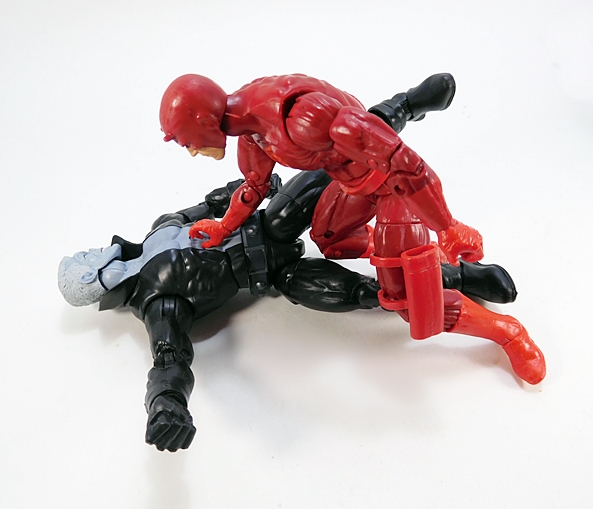 The articulation here is standard modern Legends fare, but let’s run through it anyway. The arms have rotating hinges in the shoulders and wrists, swivels in the biceps, and double hinged shoulders. The legs are ball jointed at the hips, have double hinges in the knees, and swivels in the thighs and the lower legs. The ankles are hinged and have lateral rockers. He has a swivel in the waist, an ab crunch hinge under the chest, and his neck is both hinged and ball jointed. He does have that issue annoying issue where his arms won’t hang close to his sides, but I’m willing to turn a blind eye to that. And so is Daredevil. In fact, two of them! 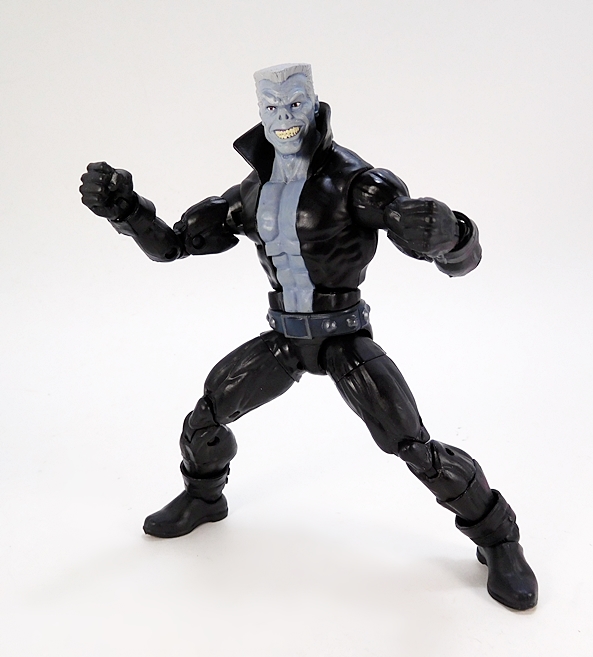 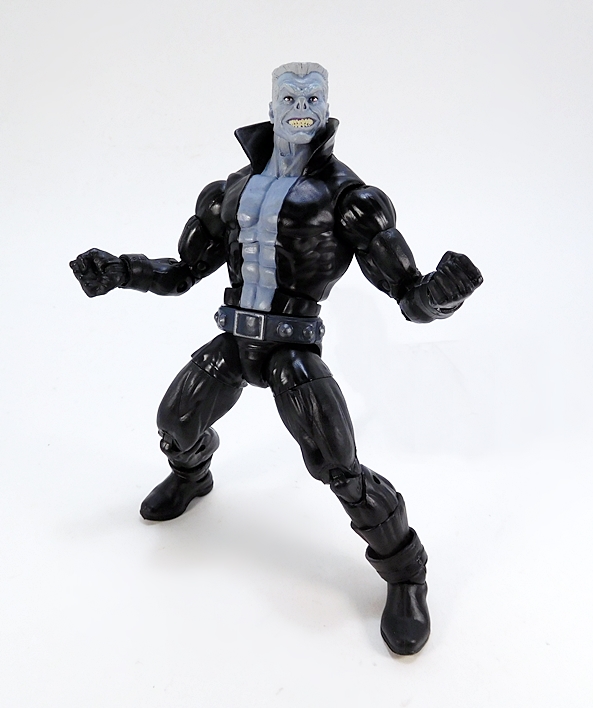 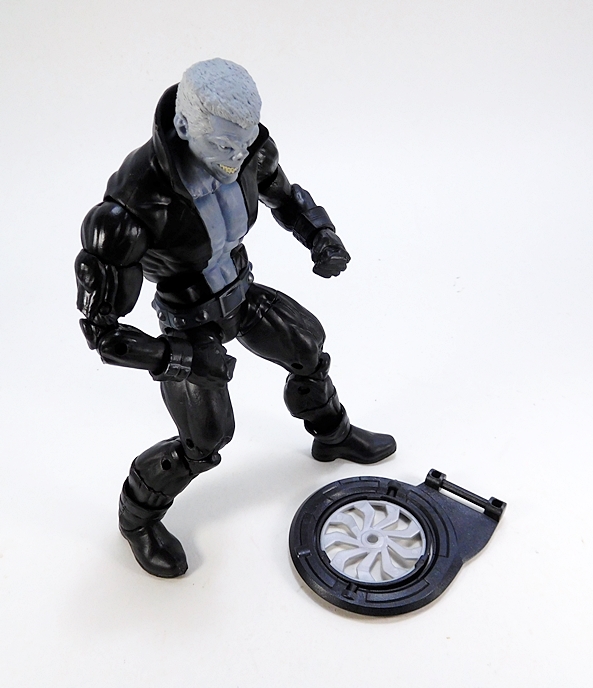 Before wrapping up, I just wanted to say how much I wish they had given Tombstone an extra pair of accessory holding hands. Yeah, I know he doesn’t come with anything for him to hold, but it would have been nice to be able to have him be able to grab Spider-Man. Even one fist and one graspy hand would have been cool. The fists are a little limiting, although fine for if you want him always ready to spar and throw punches. 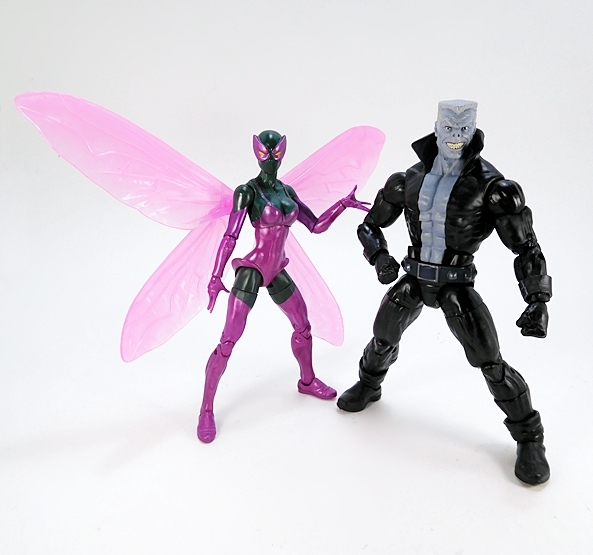 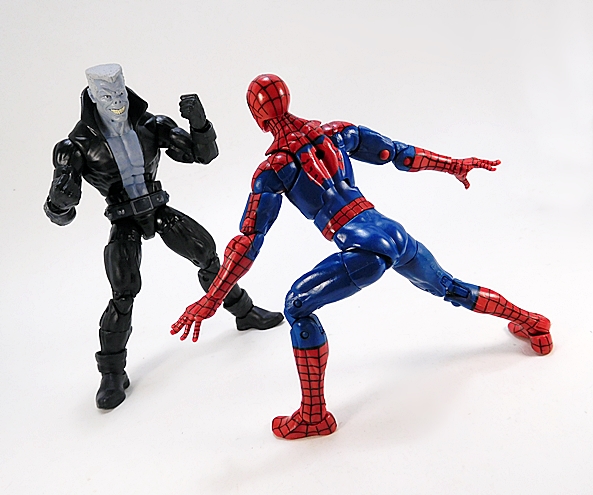 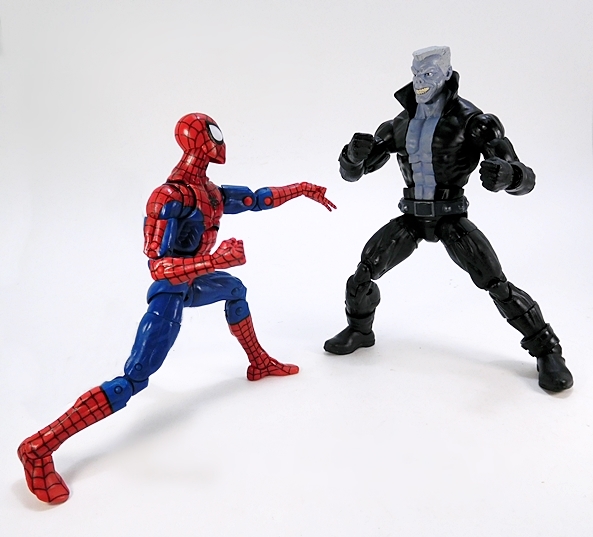 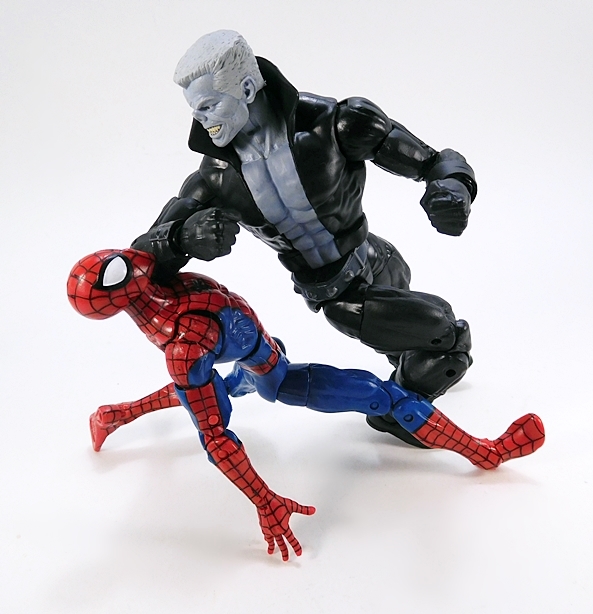 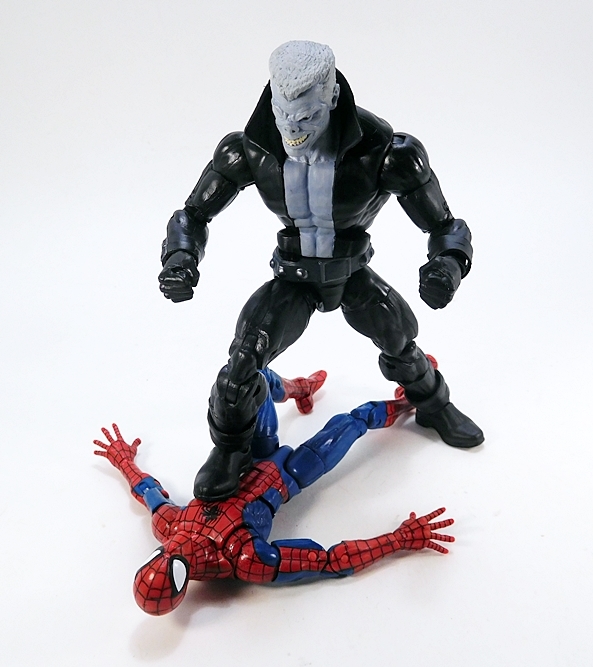 I wouldn’t say Tombstone is a great figure, but maybe I’d say he’s a great treatment of the character? Does that make any sense? He’s perfectly serviceable as he is. A solid figure through and through, but he definitely feels like the figure designed to make the rest of the wave cost out and that definitely holds him back a bit. But hey, if that’s what Hasbro has to do to get characters like this one swinging on the pegs in 2017, I’m fine with the compromise.