I honestly never buy stuff just for the sake of reviewing it here. A couple of decades ago, I was guilty of doing that with my old website when there was a KayBee Toys Outlet a couple towns over and it lead to boxes and boxes of figures and toys I really had little interest in. I just bought them because they were there and they were cheap and I could write about them. So, why bring that up now? Because I pretty much just bought Krok for the sake of having something new for Transformers Thursday. I’m not proud of myself right now.

Here’s the packaging and yes, this is a straight repaint of a figure that I wasn’t terribly impressed with when I reviewed him over a year ago. I found Krok while hitting up a Walgreens looking for Marvel Legends figures and coffee creamer. There were no new Legends, so rather than come home empty handed I grabbed Krok and a bottle of Dunkin Donuts Extra-Extra. Neither the brand nor the flavor of creamer is relevant here, but I think I’m going to need to pad out my word count on this one. OK, let’s take a look…

Gator mode! Everything I loved about the sculpt last time still holds true. And to my surprise, this one pegs together a lot better than my Skullsmasher does. I still love the G1 mecha-animal aesthetic, and this guy captures it beautifully. And imagine this, I think I even like the deco on this sucker better than Skullsmasher’s. No, I’m not digging those Mountain Dew claws, but the rest of the colors are black and purple and as Decepticon as you can get. I also really love the translucent yellow-green plate on the head and hatch in the body. The whole thing is very reminiscent of those lovely Insecticons. If only the claws were painted silver, this would have been a home-run, homage be damned!

For a bit, I thought Krok’s mouth didn’t open like Skullsmasher’s does, but it was just really stuck. I eventually got those jaws apart and to my delight the teeth and tongue are all cast in transparent yellow-green plastic, which I think looks really cool. Are you taking notes? opaque Mello Yello plastic is bad. Translucent Mello Yello plastic is good. I can’t rationalize it for you, I can only tell you how it is. 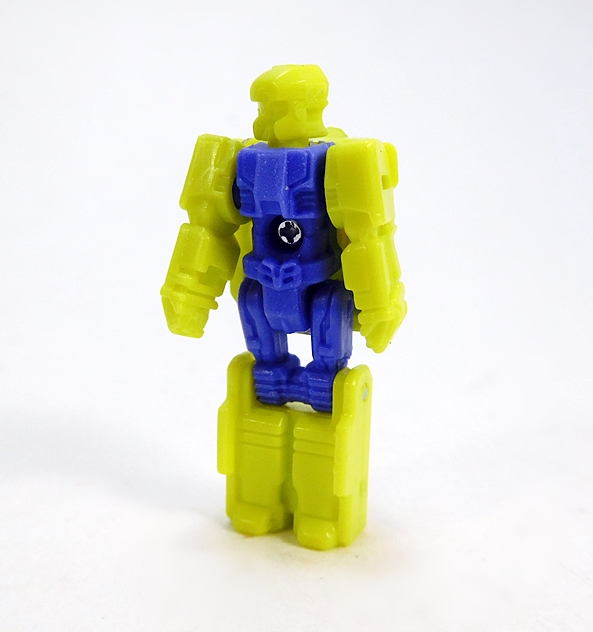 The unfortunately named Gatorface is exactly what I’ve come to expect from these little Titan Masters. For some reason, I actually don’t mind the obnoxious coloring here, but it is really hard to make out any of the sculpted detail in his head. Just like Grax, he can sit in the hatch and pilot the giant robot gator. Well, so far, I’m not too upset that I bought Krok. Let’s get him transformed and see how the other mode is…

Krok’s robot mode is still a decent mold, but the deco introduces a whole hell of a lot more Mello Yello plastic, and that’s a shame. If we got some silver instead, this would have been a repaint that I could get behind. I know, I’m missing the point of the homage to the G1 Action Master Krok, but whatever. I do, however, love what they did with his abs. The red down the middle and the silver on the sides really brings out the sculpting in there. It’s something I didn’t really notice in the Skullsmasher release. Beyond the coloring, my figure is also spoiled by the loosey-goosey hips. They were a little annoying on Skullsmasher, but here they’re just intolerable. Shooting pictures of this guy was an exercise in frustration, not only because the yellow-green plastic was befuddling my shitty camera’s sensor, but because the figure kept doing the splits.

And this head! Even with a better deco, this sculpt isn’t winning me over. I can’t figure out what’s going on with the mouth plate. It looks like he’s constantly surprised. The pink on his head crest, eyes, and in his chest panels is kind of a weird addition too. Nice Decepticon logo, though. I wish Skullsmasher had that on his chest.

You get the exact same weapons that came with Skullsmasher. Well, obviously, since one is his tail. 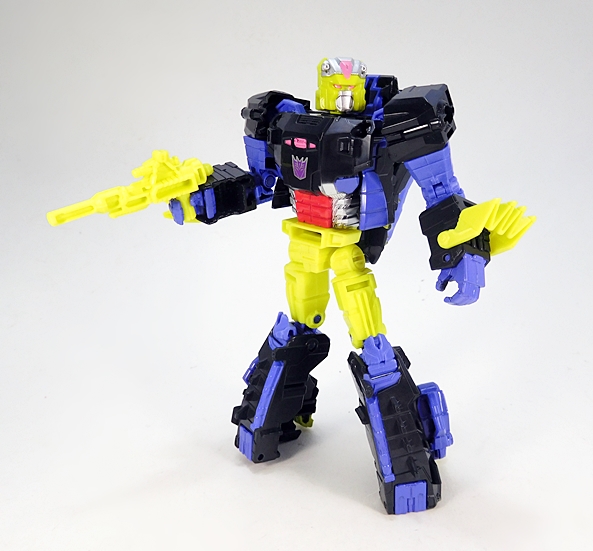 Krok is a veritable roller-coaster ride of highs and lows. The deco here is aimed very squarely at all those Action Master fans out there, and I’m not really one of them. Don’t get me wrong, I would actually love a modern day sub-line of 6-inch scale Sunbow designed G1 Transformers that focused on accessories and super articulation at the expense of transformation. But this fellow is too obscure even for my tastes. Toss in the fact that I’m going to have to treat his hips with some nail polish, and I’m pretty much regretting having picked him up. I think I’ll just leave him in gator mode and set him in the back of my display shelf.