For someone who has sworn to try to kick the third-party convertoroboformer habit, I haven’t been doing a very good job of it. And by the way, Last week’s Fansproject review doesn’t count, because I’ve been sitting on Severo forever. No, in reality, I’ve cut way back and will continue to do so, but when a certain online retailer clearanced out some of DX9’s figures at about half price, I couldn’t say no. And that brings us to Salmoore, a dude who shares a lot with their Splinter/Wreck-Gar, but is intended resemble a certain leader of the Renegade Go-Bots. Yeah, that’s right, Go-Bots. After almost 10 years of writing this junk, this may be the first time I even mentioned The Go-Bots on FFZ. I was never a fan of the cartoon growing up, but I sure loved the toys. 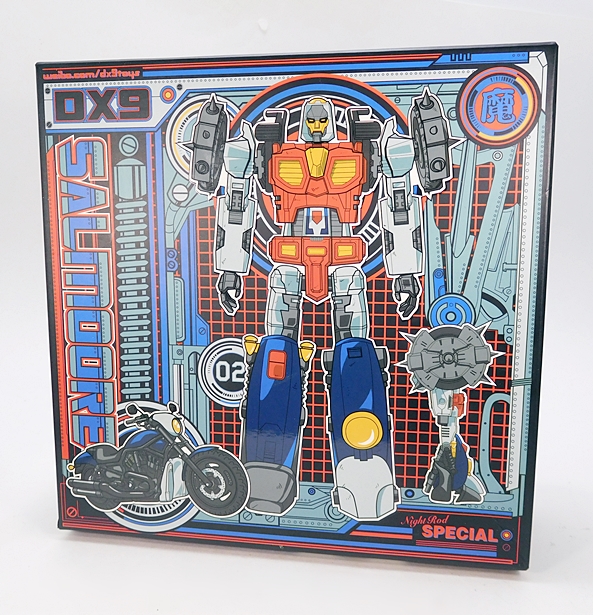 Here’s the packaging, and would you just look at this goddamn work of art! DX9 knows how to make an attractive box. Oh, the box itself is nothing all that special. It’s fully enclosed and houses a plastic tray with the figure and accessories. It’s also collector friendly. The artwork, on the other hand, is absolutely stellar. I tend to not care much about packaging. It’s mainly just a way to get a toy to me without some kid rubbing boogers or fry grease all over it at the store. But that doesn’t mean I don’t appreciate something like this. It’s so colorful and it has so much character, and I’d probably buy a print of it if one were available. Ah, but I suppose I need to get past the packaging and check out the figure inside. Salmoore comes packaged in his robot mode, but as usual, let’s start with his alt mode.

If you’re familiar with Splinter, than the majority of this motorcycle mode will also be familiar to you, as Splinter is just a re-color of Salmoore here. And I’m 99% sure that Salmoore came first. Now, DX9 did bother to re-sculpt the headlamp and shield piece that sits between the handlebars for these two figures and I can appreciate that. The rest of the bike, however, is identical and doesn’t reflect a whole lot of direct design cues from the original Go-Bot’s alt mode. This design feels more vintage and it’s obviously more rounded and looks a lot more like a realistic bike. I’m cool with that. Motorcycle transformers can be tough to do well, and this is one case where they didn’t have to sacrifice much for a great looking alt mode. 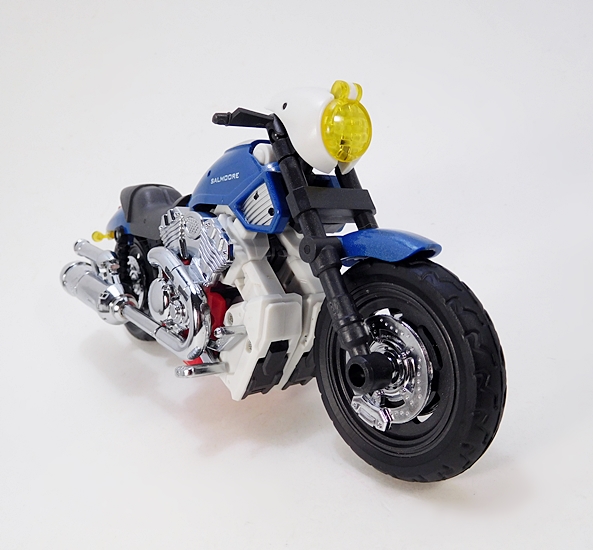 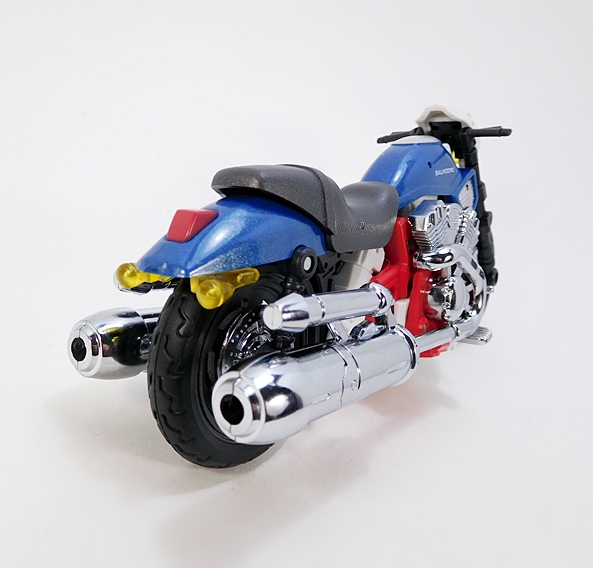 The deco shares all the right colors with the original Cy-Kill toy, namely red, white, blue, and chrome, but the ratio and placement of the colors is pretty far off. Here I would have liked something a little closer, but in this case they were clearly going for an accurate deco in the robot mode and couldn’t do both. Also, I could have done without the “Salmoore” printed on the gas tank. Still, the chrome looks great, the blue has a nice flecked, metallic finish, and the rubber tires add a sense of premium quality to the toy. The yellow headlamp on the front is a nice familiar shout out, and you get yellow taillights on the back as well. The bike also has a fold down kickstand to hold it up for display and it works quite well.

It’s worth mentioning that Salmoore’s bike mode is pretty close to 1:12 scale, which puts it at a nearly perfect size for those Marvel Legends or other 6-inch figures in your collection. 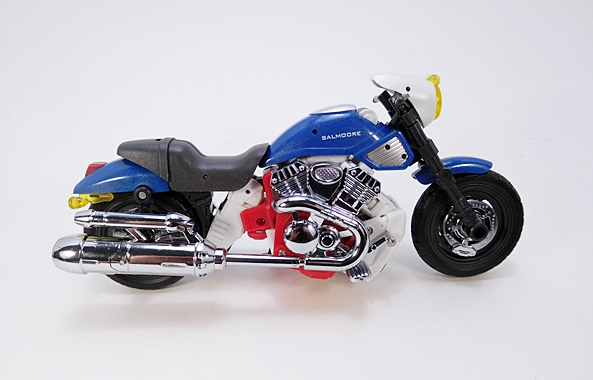 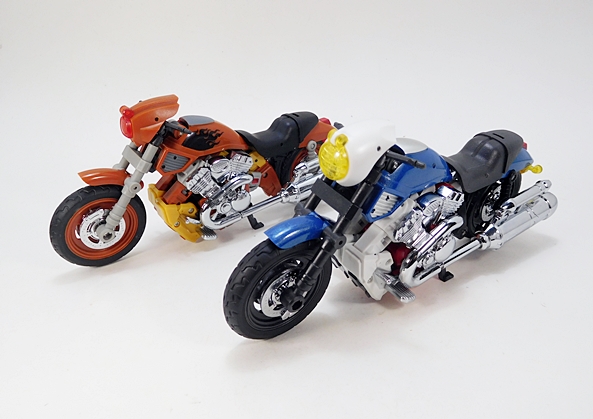 The transformation here isn’t terribly complicated, but there are some clearances that are a real pain in the ass to work with. Moving the arms, for example requires them to be angled a very specific way so that the shoulders will clear the chrome engine block pieces. It requires a lot of care to avoid scratching the chromed surface, or worse: Actual breakage. The plastic here doesn’t feel cheap, but it doesn’t feel as substantial as the stuff found in the better 3P bot-makers out there. With that having been said, there’s some cool engineering at work here, as well as some minor parts forming (both the wheels and the exhaust pipes come off), but some of that was reflected in the original toy as well. Still, in the end, I just have to admit that this is not a very fun toy to transform.

The pay off is, however, worth it because Salmoore doesn’t only look great in his motorcycle mode, but he looks pretty damn fab in his robot mode as well. While the bike mode only showed evidence of minimal re-tooling between him and Splinter, Salmoore’s robot mode shows off a different chest and head. The result is a pretty good updated version of Cy-Kill, but one that still strays from the straight and narrow in a lot of areas. To put it bluntly, it’s very clear that this mold was intended to be a compromise between two characters. How cool you are with that, will greatly affect your enjoyment of the toy. Me? I’m not exactly a Go-Bots purist, so overall I think it’s fine. If there’s anything that bothers me it’s the asymmetrical lower legs. I didn’t mind them as much on Splinter, because it was at least in keeping with the idea that Junkions are made of scavenged parts, but it doesn’t really suit Cy-Kill all that well. On the other hand, I love how the shock absorbers from the motorcycle mode wind up on his legs. 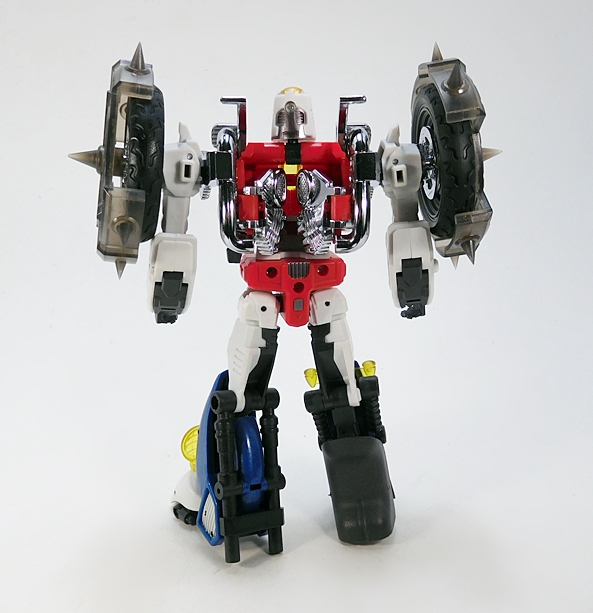 Something else that doesn’t suit the homage all that well are the spiked tire housings. I kept them on for the initial pictures, but after that they came off and will likely stay off. As for the back of the figure, well it looks mostly OK. the chrome pieces that tuck into the cavity in the torso are rather unsightly, but nothing terrible. I like the way the back legs fill in too. I won’t complain about the boxy nature of Salmoore’s arms, because replicating those tubes the original toy had would be difficult. Doing it with decent articulation would have also been tough. Oh Primus, how I hated Cy-Kill’s arms in the cartoon. They didn’t have elbows, but instead just curved like they were made out of rubber. Actually, I think that was the case with a lot of them. It was a weirdly drawn show. 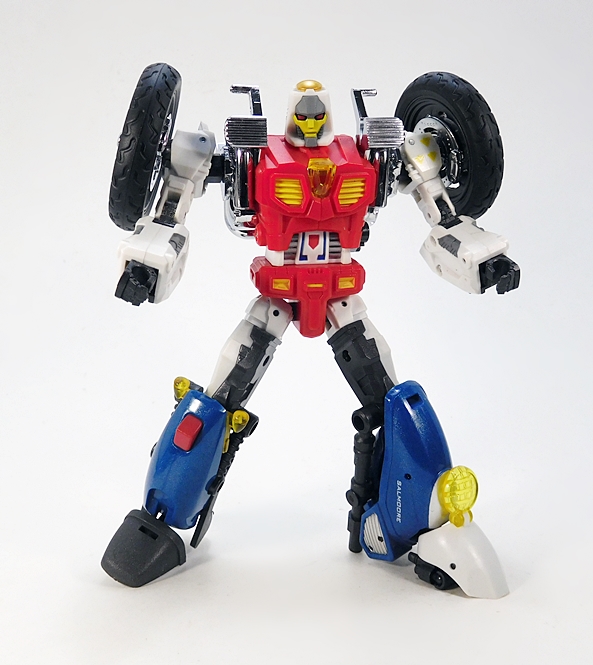 The robot color scheme, however, is quite solid. The mix of red, white, blue, and chromed out plastics are all spot on and the extra hits of gray, yellow, and blue definitely elevates the figure. I suppose his arms should be chromed too, but I can understand why they aren’t and I think the white plastic works well enough in its place. OMG, don’t get me started on Cy-Kills arms again! The fact that his feet are two different colors does irk me a bit, but at least all the offending points are confined to one area.

I like the headsculpt a lot, as it definitely looks the part. It might be a little more Transformer-y, particularly in how angular it is. The Go-Bots felt like they had more organic style faces than the Transformers. I’m still OK with it. The new chest goes a long way to drive the homage home and I like the translucent yellow piece in the middle. I also dig the way the chromed out pedals on his shoulders look, but it definitely deviates from the homage they’re going for here.

The articulation is overall solid, but there’s still a few things that irk me. The plates which the shoulders attach to do not peg into place, so they tend to hinge away from the torso when manipulating the arms. These do work in the favor of added articulation, but they can be unsightly. My other issue is that the rotational joints in the hips are a bit loose on my figure. It’s not enough to cause him to fall over, but they’re not as tight as I’d like, whereas the lateral movement on these are really tight. 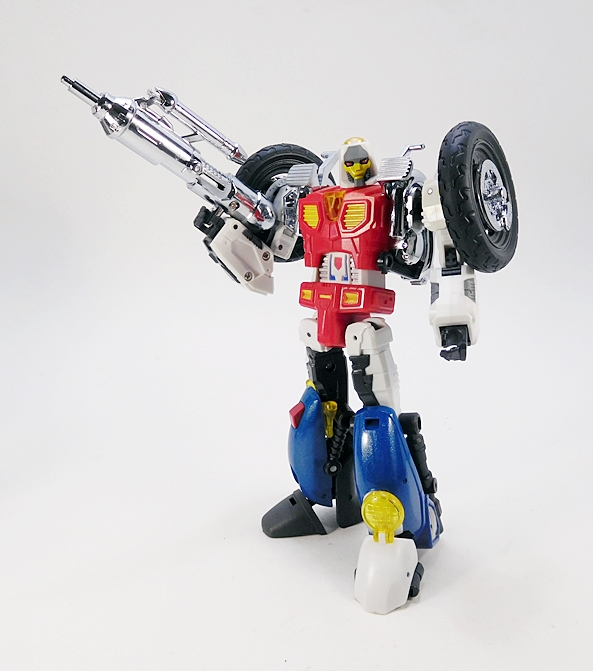 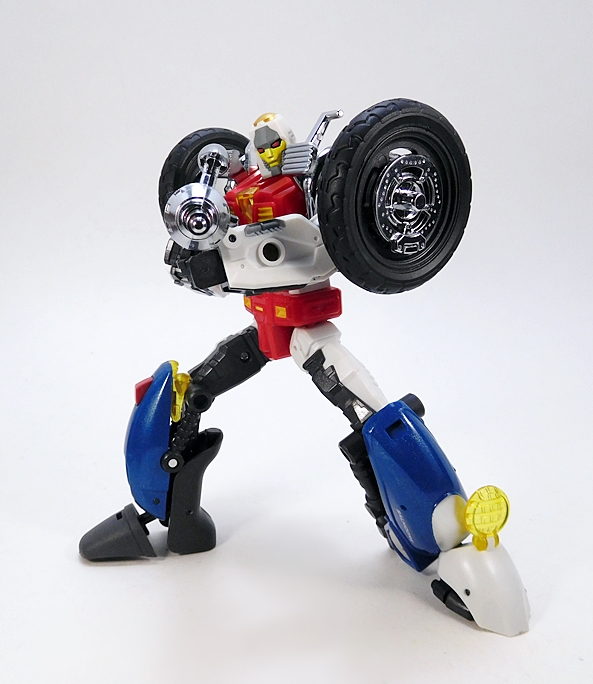 Salmoore’s exhaust pipes convert into a pair of twin guns for him, by extending out the thicker part and folding down a handle. I dig these. They have a very retro-sci-fi feel to them. They’re also not remotely linked to Cy-Kill, a character who just fired blasts from his big goofy fists. Here’s a deviation I approve of. To me guns are just cooler and more fun than laser firing hands. And yes, these are identical to the exhaust pipe guns that come with Splinter. 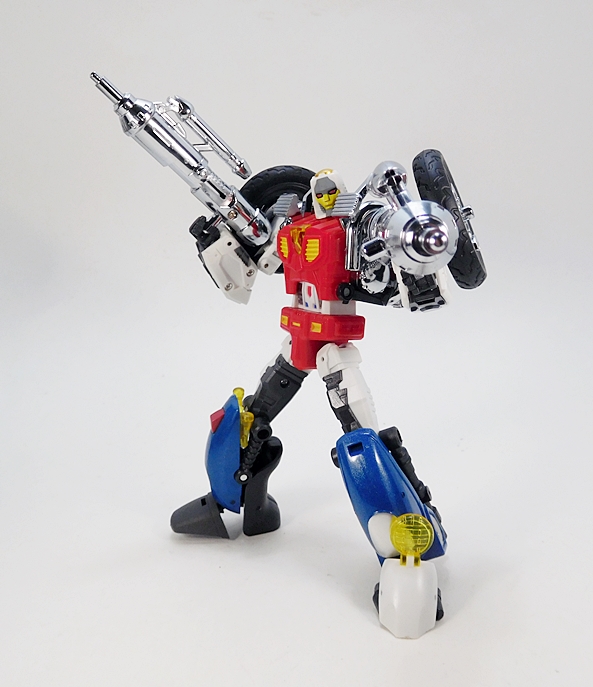 It’s amazing how a couple of tweaks to the mold and a new paint job can re-create a figure into two characters from two different franchises. Granted, there are a number of big departures between this figure and the original Cy-Kill, but in the end this design works for me as it is intended. It does not, however, work as well for me as this mold did as Wreck-Gar. Despite Salmoore being released first, I feel like Splinter was this mold’s original intent. I should also qualify my enjoyment of this figure by pointing out that I only paid $35 for him, which I believe is about half of the original price. That makes a big difference, because in the end I don’t feel like the plastic quality or engineering justifies the original retail value.