It’s Day Four of Marvel Week, and I got rather long winded yesterday, so I’m going to tone things down today with a simpler (and mercifully shorter!) review, but one that I’ve been rather excited to get to. You may remember a little thing called Disney Infinity. It was one of those Toys-To-Life things, which allowed you to collect figures and use them in a video game world. I freaking loved Disney Infinity! Seriously… just look at this shit! 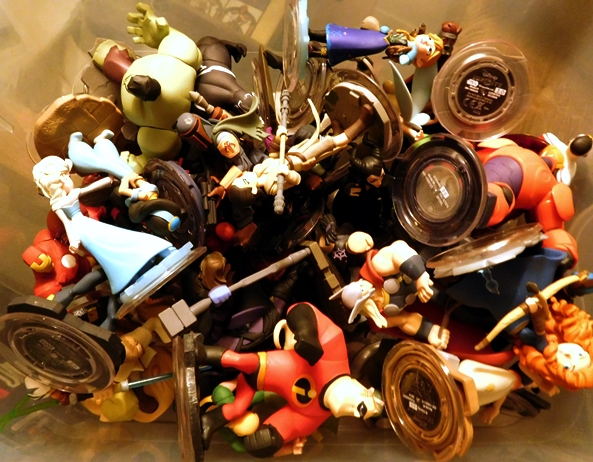 This doesn’t even include the ones I bought at the end that I haven’t even opened yet. I collected a ton of the figures, I’ve spent time playing them all, and I’ve lost countless hours in the Toybox designing bullshit levels, and maybe a couple of good ones. Infinity had a good run with three different releases spanning dozens of figures and incorporating both Marvel and Star Wars before Disney finally pulled the plug. And now in a move that I never in a million years could have seen coming, Disney has introduced a series of articulated action figures based on those Infinity designs. HOLY SHIT, I AM SO ON BOARD FOR THIS!!!! Let’s check out the first figure in the Marvel Toybox lone… The Mighty Thor!

The packaging is about as basic as you can get. The figure comes in a large bubble on an unassuming card. It gives you a great look at what you’re getting, but there isn’t much else in the way of artwork of flashy presentation to tempt you. Seriously, Disney, for a company that is basically based on artwork, you kind of dropped the ball on this package design. But that’s OK. It just makes me not feel guilty about shredding it to get to my figure. The back of the package shows off four other figures in the Marvel Toybox series, including Hulk, Iron Man, and Spider-Man. And yes, there’s also a Star Wars Toybox Series, and I’ll be checking one of those figures out next week!

If you compare Toybox Thor to the original Infinity figure, you can see that Hasbro made some tweaks to Thor’s design, but this is still undoubtedly the same style. He’s lost a helmet, gained a beard, and the piping on his armor has changed from yellow to blue. With all that being said, I love what they did with the design and it’s hard to believe that I’m actually holding an articulated Infinity figure. The sculpted detail is kept to a minimum to preserve the simple animated look, but all the important stuff is still there, like the discs on his armor, the wraps on his boots, and all that chiseled Asgardian muscle. I also really dig the head sculpt. The coif of hair is cast in a separate piece of plastic, crowning his rather perturbed expression. He looks like someone just nicked his tankard of ale. The paint applications on the face are pretty clean too! 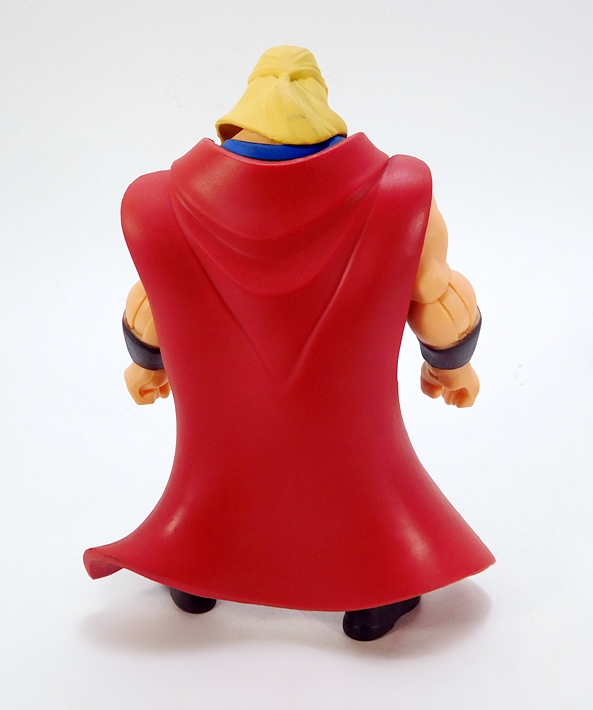 The rest of the coloring on the figure appears to be achieved mostly through colored plastic, but there are some paint applications as well. Overall, the paint is clean, but I should note that my figure had two rather unsightly paint drips on the right boot, but I was eventually able to get these off with some water and a Qtip. The cape is made of a fairly soft and pliable plastic and lifts easily away from the figure to allow for those wide stances. 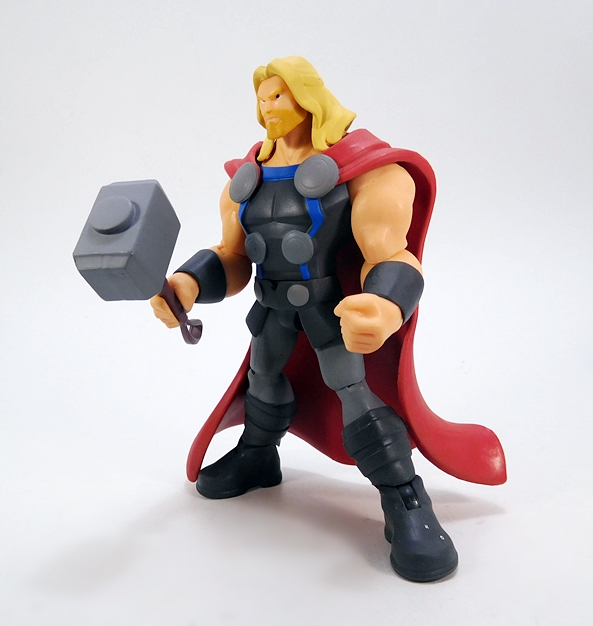 Thor comes with one accessory, and yes it is Mjolnir. The mighty hammer is a solid chunk of plastic with a sculpted wrap grip, which can fit securely in The Thunder God’s right hand. 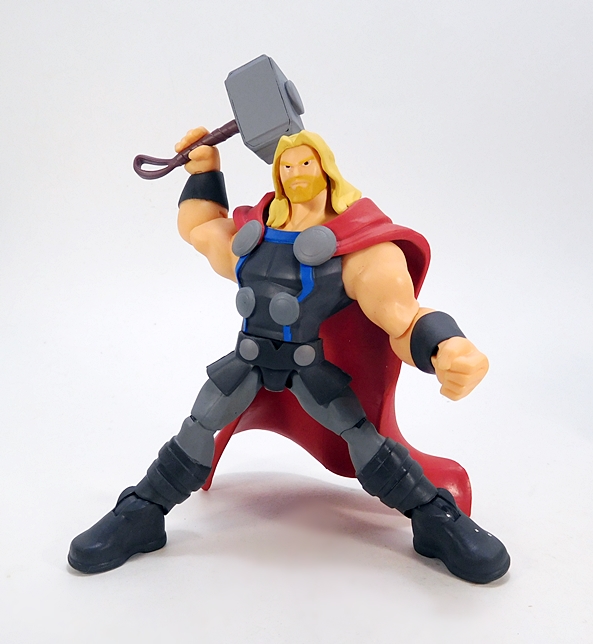 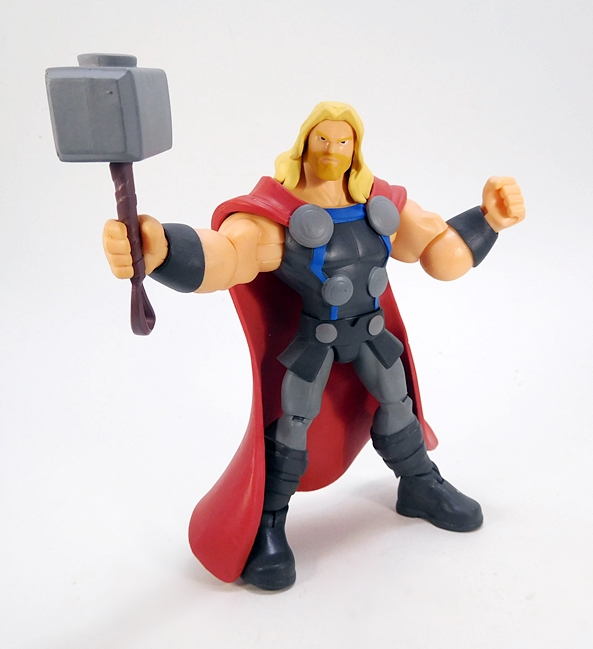 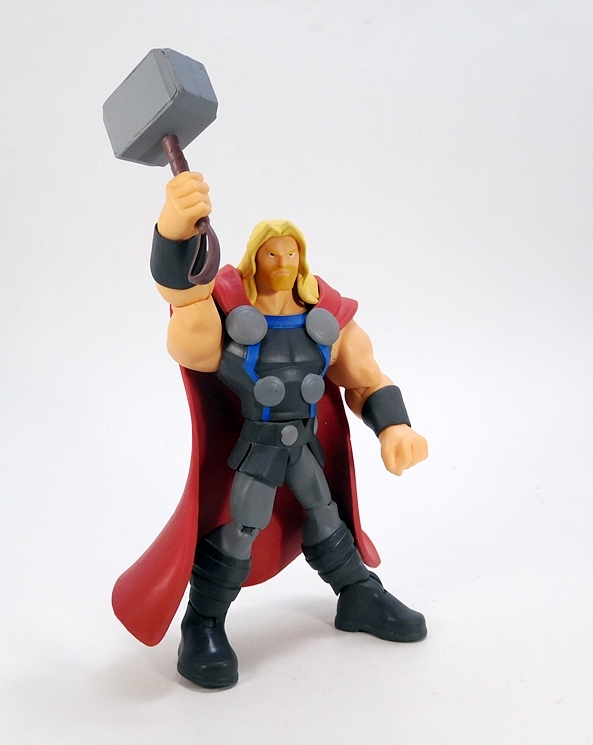 The articulation here is pretty good, but the stylized sculpt does restrict the range of motion on some of the points. Thor features rotating hinges in the shoulders, elbows, wrists, and knees. The hips are ball jointed, the ankles are hinged, there’s a swivel in the waist, and the neck is ball jointed. The elbow and knees are somewhat limited, which can be a little frustrating. Also, the sculpted hair makes it so the head can only turn side to side a bit. Still, there’s plenty of fun to be had here. He’s just so solid and chunky and fun to play around with! 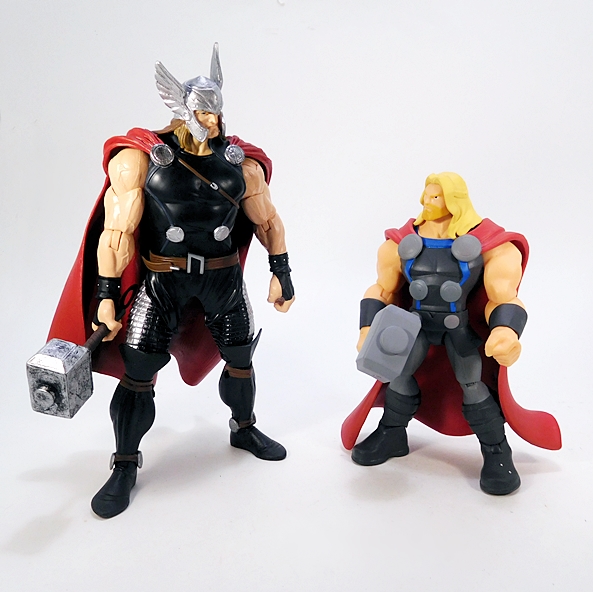 Wow, was this a pleasant surprise! These Toybox figures seemed to come out of nowhere, and I just recently discovered them because someone sent me a link. They appear to be Disney Store Exclusives, at least that’s where I found and ordered mine. They run $12.99 each, which feels about right for what you’re getting. I have no frame of reference for how well Disney’s exclusive toys sell, but I can promise you that I’ll be doing everything I can to support this line and keep it going. And as for now, I can see Thor will probably be residing on my desk for a little while, because I’m having a hard time putting him down.