I’m supposed to be pressing on with my jaunt through the Gladiator Hulk Wave today, but before moving on to the comic-based figures in that assortment, I thought I’d make a quick detour to check out this Thor: Ragnarok two-pack that I just picked up. I’ve seen this flick two times now, and I’m glad to see it’s faring so well at the box office and among critics. It’s so damn fun! 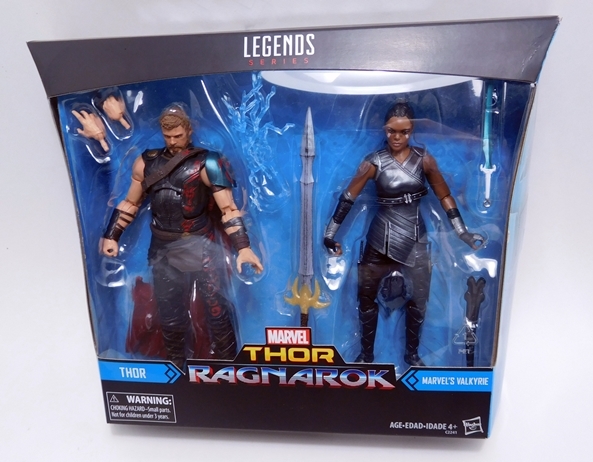 This set is a Target Exclusive, although it doesn’t actually state that anywhere on the package, and contains a variant of the Gladiator Thor figure I already looked at and Valkyrie. I’ll get a little grumbling out of the way right now about how this should have been an Executioner and Valkyrie two-pack, because I really wanted a Legends scale version of Skurge GundrothSon, and this would have been a perfect opportunity for Hasbro to do that. Instead, they took the opportunity to wring some more money out of an existing mold. Hey, it’s business. I get it. BUT I STILL WANT MY GODDAMN KARL URBAN EXECUTIONER FIGURE! Let’s start with a quick look at Thor.

So, from the neck down, this figure is identical to the Gladiator Hulk Wave version, including the shoulder strap and removable torn cape, but the right leg armor piece is not included. This was an amazing sculpt then and still is now, not to mention backed up by some fantastic paintwork. I’ll refrain from going on about it again and just refer you back to the original review that I linked above if you missed it and still want all the details and articulation. 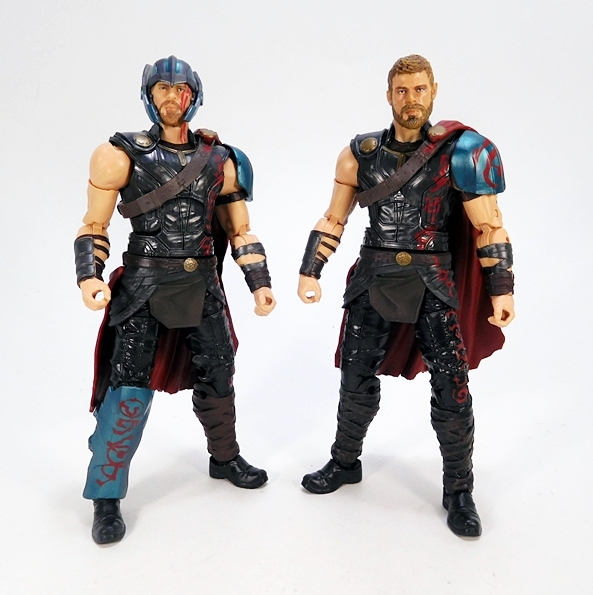 The head is all new, depicting Thor without the helmet and with the warpaint cleaned off his face. This is a great likeness, and definitely the high point of this figure, since it depicts his look through most of the movie. I love how they even worked details of the haphazard haircut, which he got from Stan Lee, into the sides of his head.

The other thing that sets this figure apart is its accessories. For starters, Thor also comes with two pairs of hands: One for pair for holding a sword, and one pair for casting lighting. Fortunately he comes with both of those things. The lightning is just a web of translucent blue plastic. I wouldn’t be surprised to find that this was recycled from a Star Wars figure. There isn’t an obvious way to get it onto the hand, so I just wound up interlacing it between his fingers through trial and error, and eventually got something that worked. 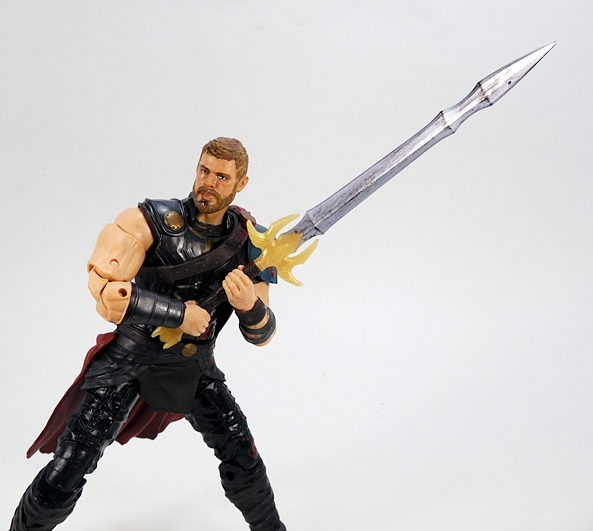 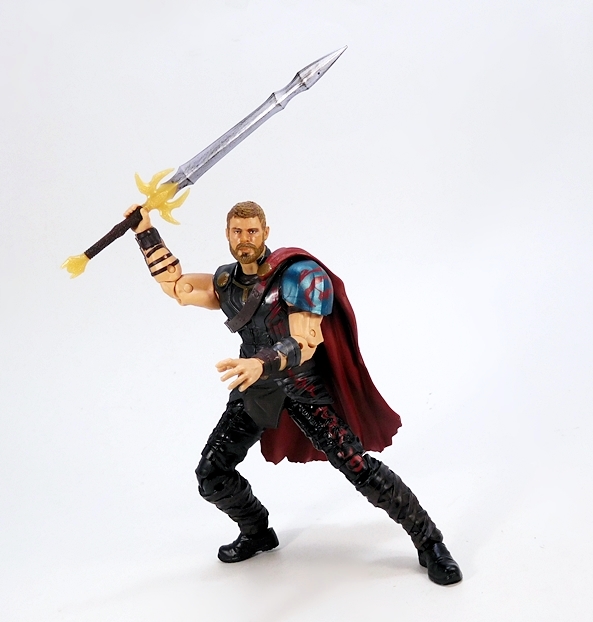 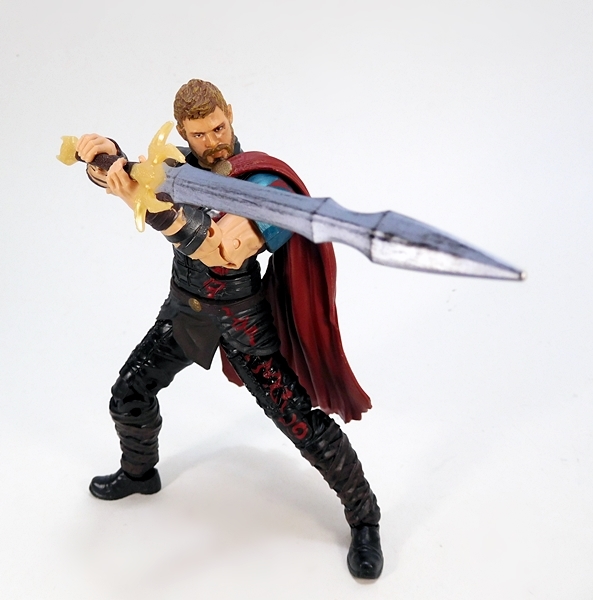 The sword is massive and features a really nice sculpt. There’s some intricate scrollwork molded in the hilt and the blade features a rather unique design as well as some nice weathered paint. The grip is long enough for him to equip it in both hands, and his articulation allows it, so you can do some nice poses with him wielding this massive blade. In the end, this figure walks a fine line between being an unnecessary repack and a worthwhile pick up. It feels like Hasbro did enough to make it not feel completely superfluous, but then you are still basically buying a figure that you probably already bought if you’re building the Gladiator Hulk BAF. Let’s move on to Valkyrie! 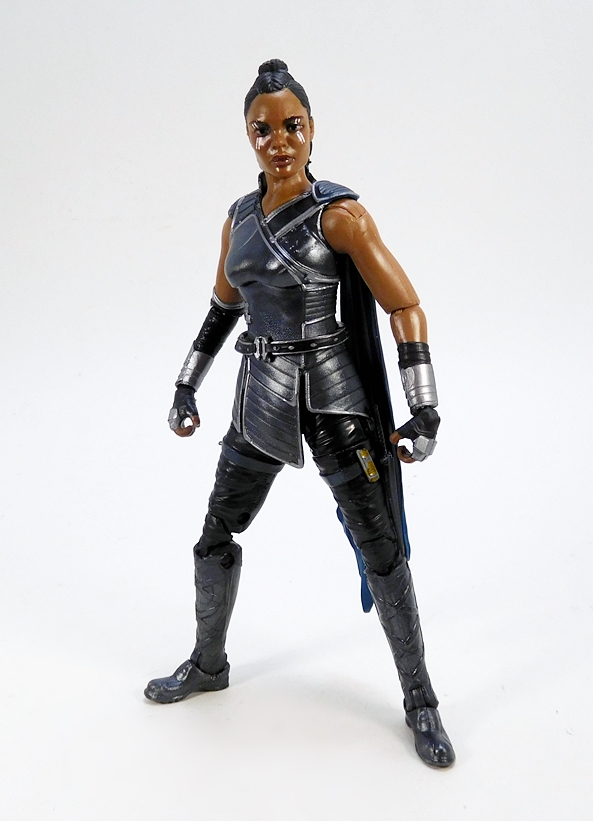 With so many great performances, it really means something to say that Tess Thompson stood shoulder to shoulder with the best of them in this flick. I loved MCU’s Valkyrie’s backstory, she had a nice little character arc, and I’m not ashamed to say I left the theater rather smitten with Ms. Thompson as well. Now, if I had my choice, I probably would have went with her Asgardian costume (YUM!) instead of her scavenger garb, but considering she wore this look through most of the film, I can understand why Hasbro went with it. Her armor consists of a sleeveless coat, the bottom half of which is attached to the buck to give it some depth and allow the waist articulation to be hidden under it. It’s cast in a soft gunmetal blue plastic with some nice painted silver borders. The rest of the body features more of the same, as well as some black for her trousers, gloves, and arm wraps. 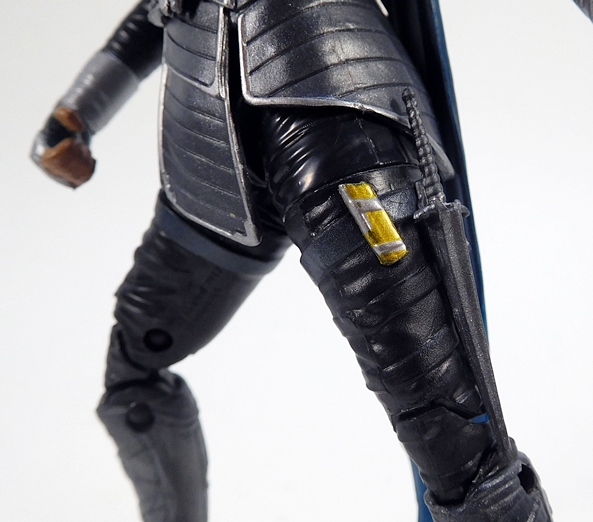 Half capes are apparently all the rage on Sakaar, because Valkyrie is sporting one as well Thor. Hers is cast in soft blue plastic and attaches to her left shoulder armor. She also sports twin daggers sculpted onto her hips. It would have been cool if these were removable, but they sure look good. Her left inner thigh also has what I believe is the remote control to the restraining bolts used on the slaves. Whoops, I’m sorry. I meant to say “prisoners with jobs.” Lastly, Valkyrie has a thin belt, which hangs loose on her hips. All in all, I’d say Hasbro did a nice job on her costume. The color palate doesn’t allow it to be overly flashy, but the silver paint hits and the blue cape do help a little.

The portrait is pretty solid, although I will say this is one of those cases where it looks a lot better in hand than in close up photos. The white paint around her eyes looks like it’s actually made up of chain links, but since it isn’t terribly crisp, it looks like just straight lines. The printing on the eyes themselves could have been a little clearer too. There’s also an unfortunate mold line running right down the middle of her neck. The sculpt, however, is excellent, I love the pony tail, and I think that this is a pretty good likeness, but not one of the Hasbro’s absolute best. 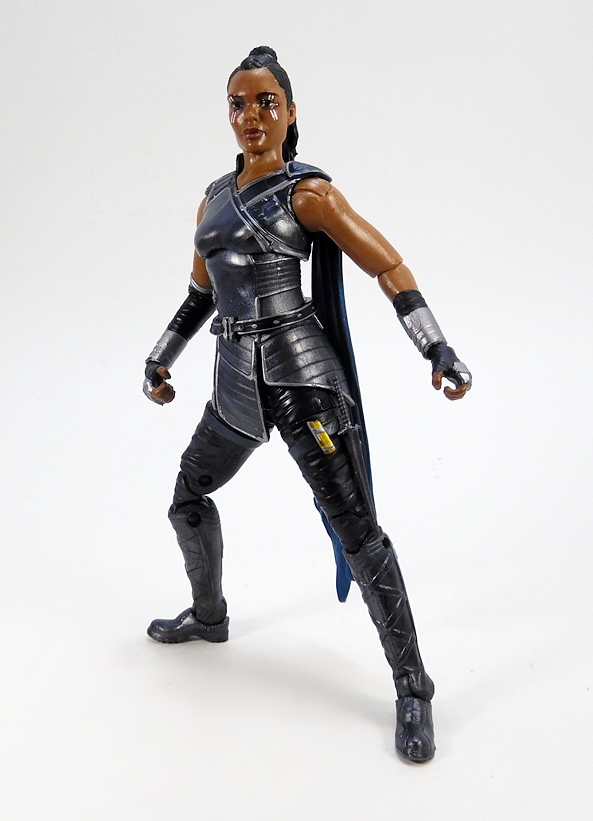 Valkyrie sports pretty female Legends articulation. The arms have rotating hinges in the shoulders, elbows, and wrists, but no bicep swivels. The legs are ball jointed at the hips, have swivels in the thighs, double hinges in the knees, and the ankles have hinges and some very generous lateral rockers. There’s a waist swivel hidden under the armor, and a ball joint just under her chest. The neck has both a ball joint and a hinge. The skirt is designed so that it doesn’t inhibit her hip articulation too badly. I still felt that the figure poses a little stiff, and I think double hinges in the elbows would have helped a lot. 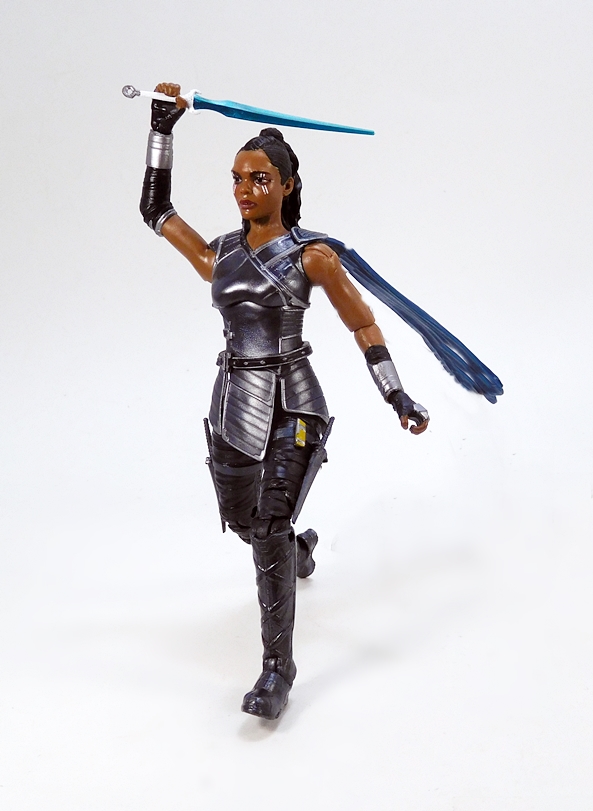 Valkyrie comes up a little light on accessories, although she does come with Dragonfang, the fabled Sword of the Valkyries, and a scabbard. The sword certainly looks the part. It’s a sharp little sculpt with a white hilt, silver pommel, and blue blade, but it’s so damn small and soft that it’s hard to keep it straight and looking all that convincing. It also tends to swim around in her grip because the hilt is so thin. The result is what is supposed to be a majestic and feared sword comes across as a rather frail and impotent looking weapon. 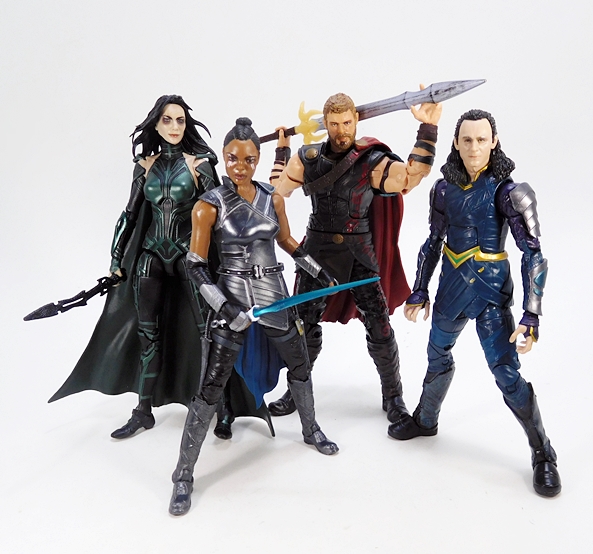 I’m glad I picked up this set, even if I still insist Hasbro should have just packed the extra Thor head in with the single release and gave us Skurge instead. It’s not so much that I mind double dipping a bit to get a figure that Hasbro wouldn’t have put out separately, but rather I don’t see them having any other opportunities to put out characters like Executioner or Heimdall. It’s not like we’re going to get another wave of Ragnarok figures, even if they could have easily padded it out with Banner in Stark’s clothes, The Grandmaster, and Odin in his grandpa clothes, all wrapped up with a Korg BAF. And yes, I would have bought the shit out of that wave! Still, with the way Target works, I’m sure this set will be up on clearance before you know it, so the waiting game might be the way to go on this one. Next Monday, I promise to get back to the Gladiator Hulk Wave and start in on the comic-based figures with a look at Ares!