Welcome back to the second half of today’s Marvel Monday! I’ve opened and reviewed each of the figures in the Gladiator Hulk Wave and that means, it’s main event time! And now, I give you your Incredible, Astonishingly Savage… HULK!!! It’s only fitting that I managed to get out to see Thor: Ragnarok one last time this past weekend before it disappears from theaters. I still can’t believe how well Marvel Studios managed to mate the Ragnarok and Planet Hulk stories into such a fun and enjoyable movie. And I’ve got to say, this movie just keeps getting better each time I see it. Let’s see if that’s true about this assortment of figures!

With a whopping ten pieces, including accessories, Gladiator Hulk is probably the most complex BAF that I’ve put together in a long time. Assembly is fairly easy, although I did have to consult a picture to make sure his shoulder armor went on correctly. The limbs plug in fairly easily and they stay locked in pretty well once they’re in place.

And when you’re done, you get this beautiful beast of a figure! There’s just something both iconic and awe inspiring about Hulk in gladiator armor and the MCU version is pretty damn rad. The Hulk buck features sculpted sandals, as well as armor for his hands and forearms, and a ribbed pair of shorts. Over the shorts, he has a soft plastic belt with a skirt of strips hanging down to just above his knees. The shoulder armor is also sculpted as a separate piece. The detail on the armor pieces is very well done. You get some leather-like texturing in the skirt strips, some sculpted pitting and wear on the arm plates and shoulder piece, as well as all kinds of sculpted straps and buckles meant to be holding these pieces on. The whole ensemble features a great scavenged and rag-tag motif, while mixing the traditional gladiator look with some more futuristic looking pieces.

The paint and coloring on the figure is also quite good. The plastic used for the buck is a rich, deep green. Yes, it is significantly deeper than the Legends Age of Ultron Hulk. The armor features a mix of really pale copper and blue, all done with a metallic sheen. The sandals are neatly painted brown, and Hulk has the Sakaaran war paint in white down the front of his chest and right arm, which also carries over the armor straps. There’s a little slop here and there, but nothing too bad.

The head sculpt is superb. It’s a calmer expression than the one we saw on Age of Ultron Hulk, with the mouth closed, but definitely showing signs of displeasure. I like it, but I would understand if some collectors would have preferred something more angry. After all, he does spend most of his time in the armor fighting. I’d argue that this would have been a great occasion to roll out an extra head, but this figure already features a lot of parts, so I can understand why that didn’t happen. Anyway, the hair is neatly painted and you get more of the white warpaint on the side of his face. 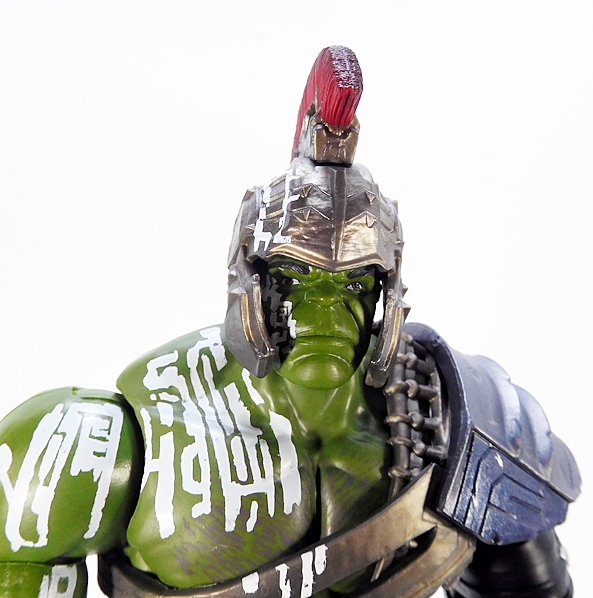 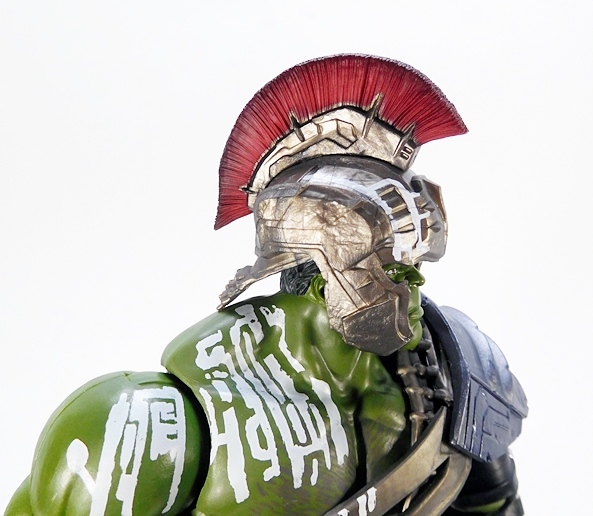 The gladiator helmet is a little work of art all unto itself and fits the figure very well. It looks like it was hammered out of scrap metal. You can see the seams of various plates jointed together and the hammered and battered finish makes it look well used. The paint is the same pale copper used on some of the body armor and he has more of the white war paint down one side. The sculpted comb on the top is painted with a bright crimson. 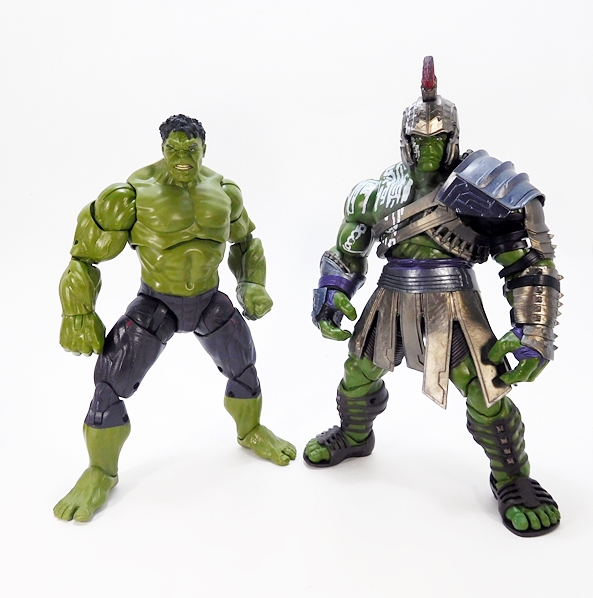 I’d be remiss if I didn’t say a few words about scale, because this guy is definitely not in proper 6-inch scale. Yes, he’s the same size as the Age of Ultron Hulk and he wasn’t in scale either. I would have really liked if they could have made him bigger, since he is a BAF, but it’s not a total deal-breaker for me. At least he’s still notably bigger than the regular figures. Maybe the way to go would have been to release him as one of the 12-inch figures we’ve been getting and then they could have made Korg the BAF for this wave. And as long as I’m comparing the two Hulks, I’ll point out that the articulation is almost identical. The one difference is the AoU Hulk had double hinged elbows, whereas this guy has just single hinges. 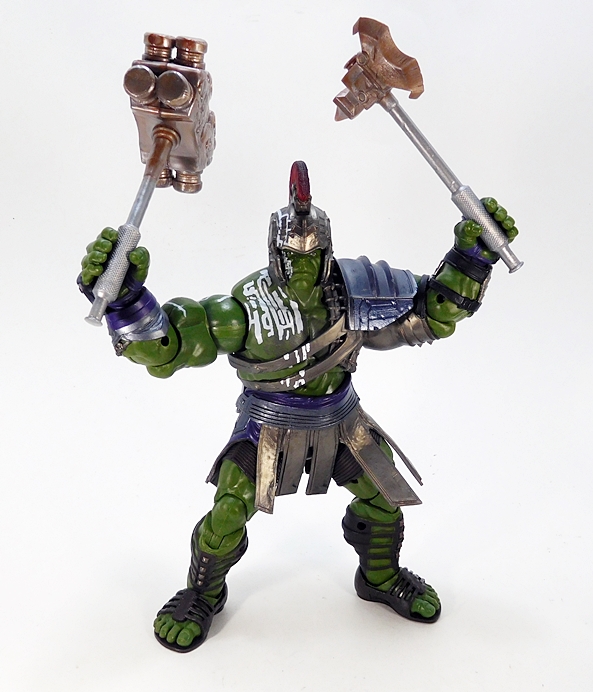 Hulk comes with two weapons, his huge hammer and his axe. Both of these pieces are cast in a silvery, almost pearlescent plastic and given a coppery wash. The hammer is my favorite as it looks like they just took some kind of engine block from a space ship and stuck a shaft onto it. Of course, the axe is no slouch either, and features a pretty nasty spike opposite the blade. Both of these pieces feature textured grips, and while they can be a little tough to get into his hands, but once they’re in there he holds them very securely.

All petty gripes about size aside, I absolutely love this figure. It’s probably one of my favorite BAF’s all year, and that’s saying something because we’ve had some really good ones. The sculpt is fantastic, the coloring is beautiful, and he comes with a couple of amazing weapons. I won’t lie, I was hoping we’d get one more wave of figures out of Thor: Ragnarok, especially with how well it performed at the box office. The movie had a rich tapestry of great and bizarre characters, most of which would make wonderful figures. It seems a shame to leave characters like Korg, Meek, Executioner, and The Grandmaster on the table, not to mention Valkyrie in her armor. And what about a Build-A-Figure Fenris? There was a lot more potential here and a lot of it could have been fleshed out with just one more wave. But I guess I should be happy with what we got, rather than be sad over what could have been.

And that wraps up another kick ass assortment of figures from Marvel Legends! And I’m glad it was a good wave to go out on, because chances are I won’t be starting on the next wave until after the end of the year as I’ve got a couple of detours I’d like to take on the next Marvel Mondays. Next week I’ll likely be looking at the Walgreens Exclusive Medusa, and then if time permits, I’d like to check out Hot Toys’ Doctor Strange the week after that. That’ll put me back on track and starting to look at the Man-Thing Wave sometime around the first week of January.