Here we go, folks, today I’m opening up the final figure in the Gladiator Hulk Wave of Marvel Legends, and it’s Lady Thor! or Jane Foster Thor? or Fake Thor!?! I’m going to confess that I’ve re-written the intro to today’s review a couple of times, while waffling back and forth about how heavy handed I want to get with how the character of Jane Foster as Thor relates to the dumpster fire that is Marvel Comics these days. Ultimately, I decided to let a lot of it go, but I did just want to drop one editorial comment to Marvel here: It’s a wonderful thing to want to create more female characters as comic book A-Listers. It’s another thing to have to replace beloved existing characters with them. In the infinite world of comics, you don’t have to tear one thing down to build another. And if you do, don’t be surprised about the rage that you incur. I’d also suggest that there are a lot of great existing female characters in the Marvel lexicon that deserve engaging and well-written books of their own. And that’s where I’m going to leave it.

OK! Back to toys! And here’s Jane in the box, and once again thanks to some beefy BAF parts, we get a pretty damn heavy package. And thanks to this leg and shoulder armor, I’ll finally be able to complete my Champion of Sakaar and put him together later on tonight. But first things first, let’s get Jane out of the box and check her out. Oh yeah, I should note that like Thor Odinson, a variant of this figure was also included in the SDCC Battle for Asgarde set, which still sits over there unopened in the corner. I’ll get to it eventually. 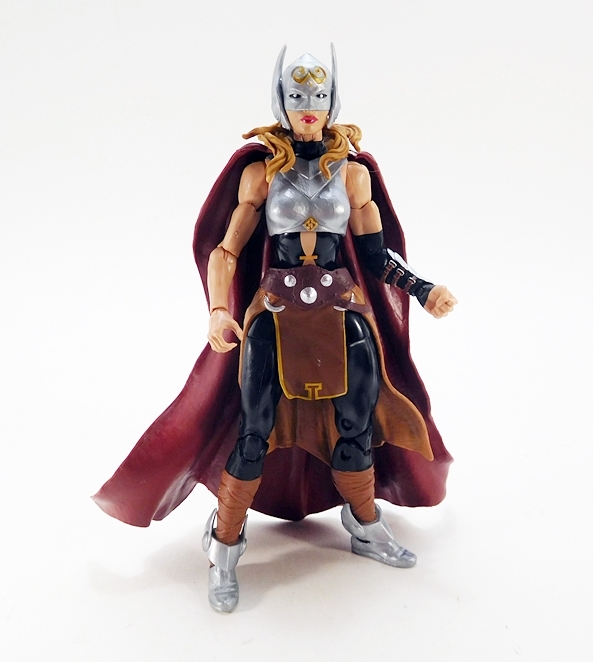 Whatever issues I have with the character, I cannot deny that Jane is sporting some kick-ass Femme-Thor cosplay. I love this character design, that’s the main reason I’ve actually been excited to get this figure in hand, and I have to say it does not disappoint. The costume features several layers of Norse fashion starting with a painted black body suit, a skirt-like half-cape and belt cast in soft plastic, a silver breast plate layered on top of the buck, and a silver wrist guard on her left arm with individual sculpted straps and a partial black glove painted on the arm. Her lower legs feature sculpted wraps, silver boots, and separate winged pieces, like armored spats. I love the complexity here. The design really shines, and Hasbro did a fabulous job with it. The paint quality here is pretty fab as well. The silver paint they used on her armor looks great over the hammered finish. It’s also used on her boots, the studs on her belt, her arm guard, and even the tiny buckles on the straps.

Jane also sports a billowing cape, which pegs into her back and appears to float over her shoulders just like Classic Thor’s cape. There are two silver discs that position over her shoulders, but it’s a little tough to see them with her hair in the way. The cape does make her a little back heavy, but since it touches the ground in the center it also serves as a support for her.

The head sculpt is every bit as complex as the rest of the outfit. The helmet covers most of her head, leaving just her mouth and chin exposed. It’s cast in silver plastic, but it matches the paint for the chest plate fairly well. It also features a gold decoration on the front, and two sweeping side pieces that resemble wings. Jane’s eyes are represented as black with two silver pupils, which is more than a bit creepy, and her lips are neatly painted. The sandy blonde hair spills out from the bottom of the helmet and around her shoulders, but hardly hinders the neck articulation at all. 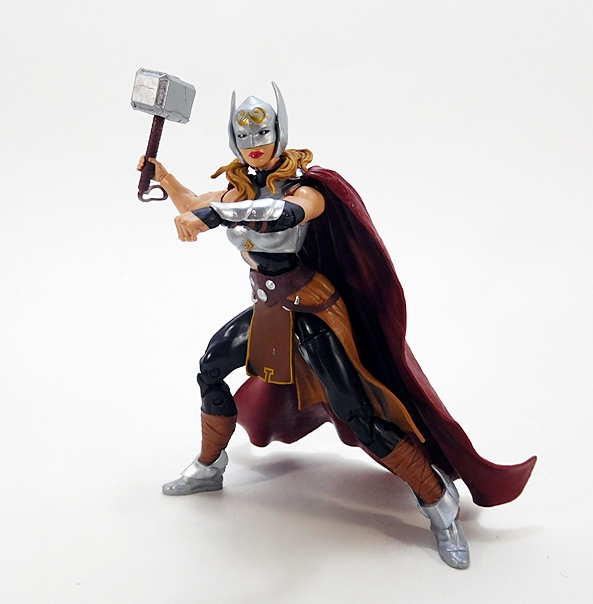 And speaking of articulation, here’s a rundown on what Jane’s got. The legs feature ball joints in the hips, double hinges in the knees, swivels in the thighs, and both hinges and lateral rockers in the ankles. The arms have rotating hinges in the shoulders, elbows, and wrists, and she has swivels in the biceps. She has a ball joint just under her chest and both a hinge and ball joint in the neck. 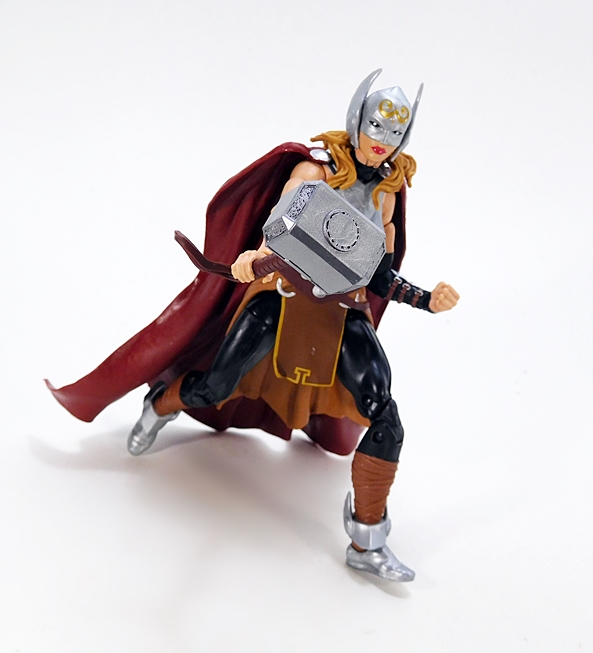 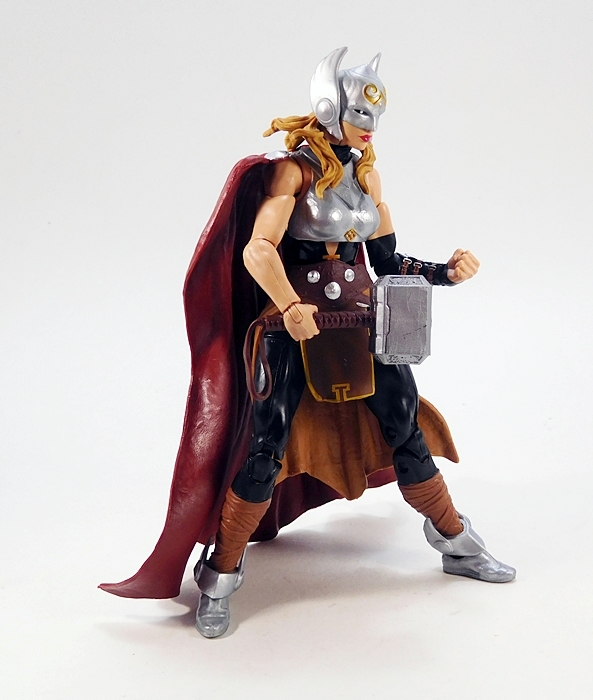 Of course, Jane comes with Mjolnir, which she can hold comfortably in her right hand. the left hand is balled into a fist. This is a familiar looking sculpt, and while I don’t have any of the others handy, I’m sure it’s recycled from a past Thor figure. I’ve got no problem with that, because it looks great.

In what has been a very solid assortment of figures, Lady Thor holds her own as a top contender for my favorite in the wave. The excellent character design translates beautifully to figure form and I believe I would have a lot more fondness for this version of Jane Foster if she hadn’t usurped Thor’s name and if Marvel’s current crop of writers were actually turning out compelling and entertaining reads. I didn’t intentionally save this figure for last, but it turns out to be a great way to end this look at such an excellent wave. Join me back here tonight and we’ll check out the Build-A-Figure of the wave… Gladiator Hulk!