In case you missed it, Power of the Primes is hitting the shelves and last time on Transformers Thursday, I got really long winded over a very little Deluxe Dinobot named Slug. This time, I promise to control myself and not get as carried away. I’ve also decided that I’m not going to spend any time on the actual Prime Master gimmick, because it doesn’t do anything for me and I don’t have any Prime Masters anyway. Oh, I’ll get some eventually, but I just don’t plan on doing a lot with them and the Prime Armor. And with that preamble out of the way, let’s get this party started… 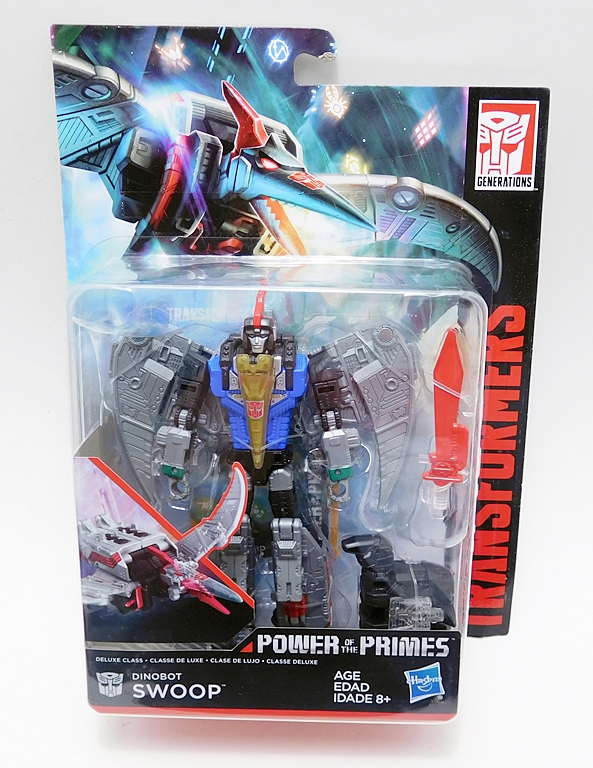 SWOOP!!! If you were expecting a big re-branding for PotP, then behold the visage of your disappointment. It’s more or less the same packaging we saw for the last couple lines. Nice character art, though. I’ll also throw in how odd it is that Hasbro has lost so many copyrighted names over the years, yet somehow managed to hold on to one as common as Swoop. Sure, they call him Dinobot Swoop, but couldn’t they have just called Slug, Dinobot Slag? I’ve also just realized how both fun and ridiculous it must be to be an actual toy lawyer. Anyway, this guy comes packaged in his robot mode, but we’re going straight for the Pteranodon. 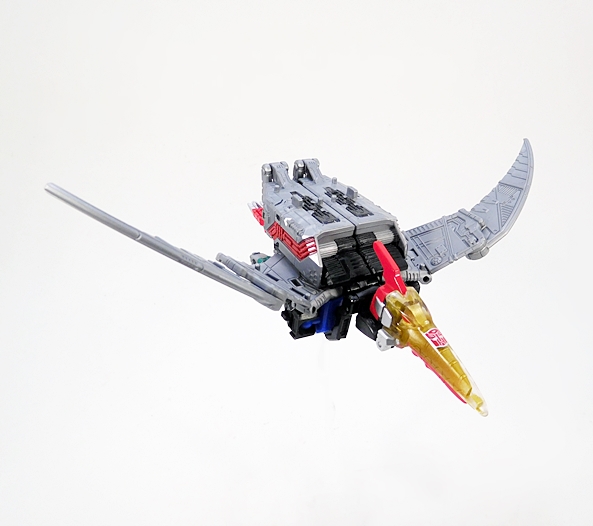 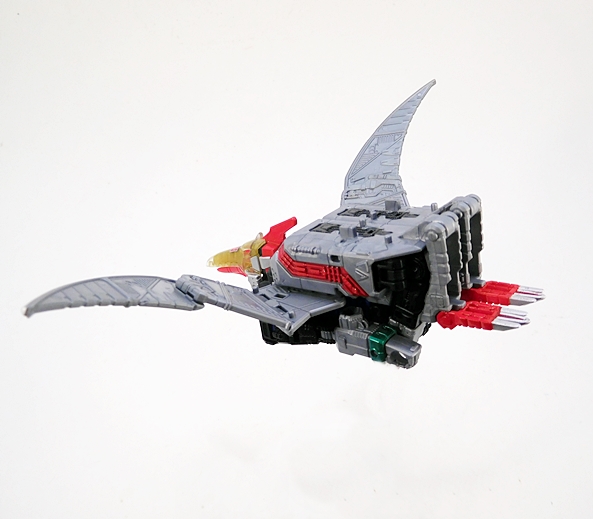 Much like his comrade, Slug, Swoop’s alt mode is an excellent update to the original toy, with just a few minor quibbles here and there to keep him from achieving a state of Cyber-Pteranodon nirvana. My favorite thing here is the complexity of the sculpt. We saw it last time with Slug, and there’s plenty more here where that came from. The gray plastic body and wings are practically littered with detail including panel lines, vents, wires, and all kinds of the cool little things that make up a RoboDino. The body features a rather squared off back which speaks to the robotic design, while the wings are a bit more organic in their shape. There’s some black paint on the panels on top of his back, and he also has some nice red paint work on the sides. Swoop also has some little pegs on his back and wings so you can load him up with Titan Masters or Prime Masters. Fun! 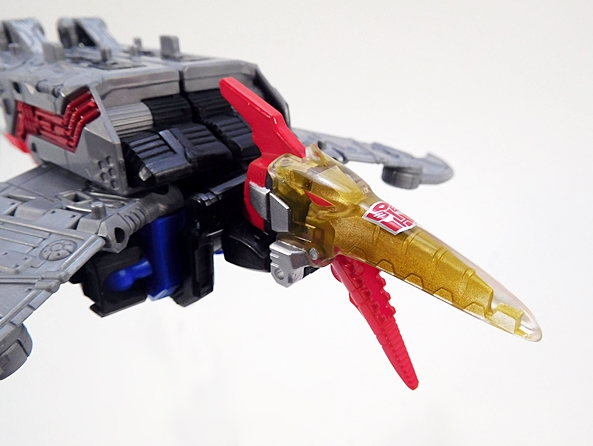 The head clearly succeeds in its G1 Swoopiness. It features a red pointed crest and a long beak, which consists of a translucent shell over gold plastic. The eyes are painted red, as is the lower jaw, and he has a crisp Autobot emblem stuck right on the top of the base of the beak. Those old Dinobots had such a signature look to them and this guy delivers it in spades.

From behind you can see his two little red and silver bird feet trailing out the back, and if you turn him over, you’ll see some robot shenanigans, including his arms and hands tucked in the sides. This mode pegs together fairly well, with the one exception unfortunately being the head itself. The hinged part of the dino head that covers Swoop’s robot face will sometimes stay put, but it does like to drop down quite a bit as well. There’s really nothing holding in place but a wee bit of friction and a lot of prayers. Getting it to stay in place can be frustrating. Also, Swoop doesn’t come with anything to resemble his G1 missile launchers, and that’s a shame. Yet another reason one of those third parties should step up and do a weapons pack for these dinos.

Size is still a bit of an issue here, although not as much as it was with Slug. I don’t know much about the actual scale of Pteranodons, but in my mind they don’t need to be huge. Either way, I think he scales perfectly with Slug, and honestly, I think he scales OK with Legends Class Bumblebee. Swoop always was the runt of the Dinobot litter anyway.

Transforming Swoop is pretty simple and doesn’t hold a lot of surprises. The legs unpack from the back and body, the arms come out from the sides, and his beak splits to reveal his face. It’s all familiar, and it results in one fabulous looking robot mode. The proportions are great, I love the way the birdy feet are integrated into his lower legs, the wings fold up so that they aren’t in the way. He also looks very polished from the back. There’s still more sculpted detail on the undercarriage of his wings, and oh, that’s where they’re hiding his combiner port!

You’ve probably noticed that Hasbro went with the Diaclone blue over the Dinobot red for Swoop’s chest. It’s a weird choice, but not something I’m going to get all worked up about. Otherwise the robot mode deco features more of the same gray and black from his alt mode. You get some stickers on his chest, and some really pretty emerald green paint on his wrists. 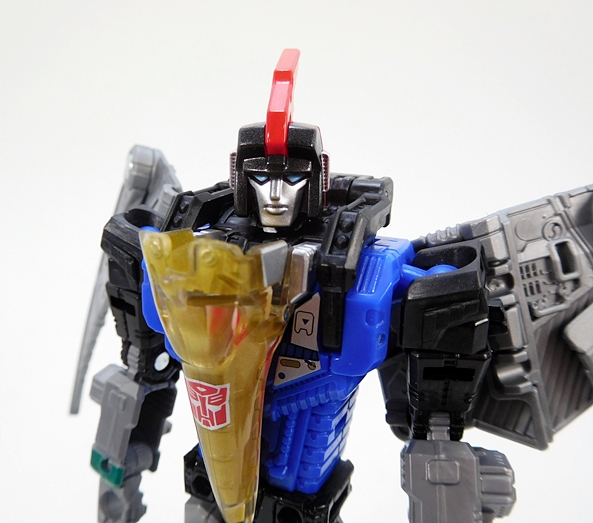 The head sculpt is perfect. What else is there to say? The silver paint looks fabulous and he still retains his red crest from his alt mode. 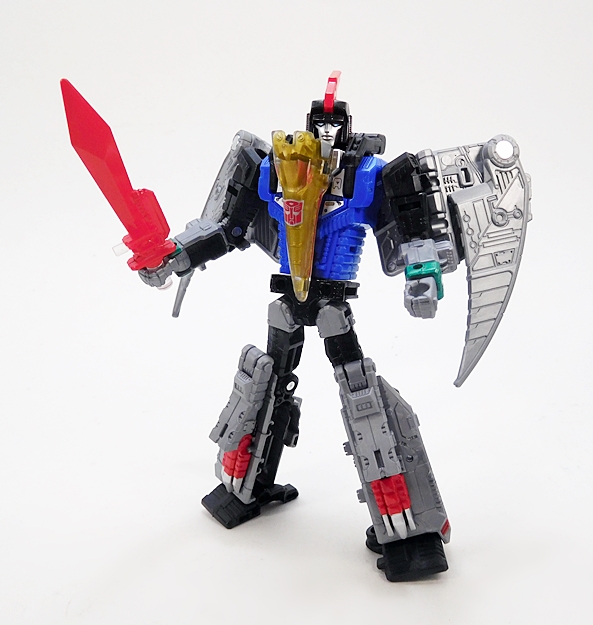 In addition to the Prime Armor piece, Swoop also comes with a sword. It’s read, it has that distinctive elongated diamond-shaped blade that I tend to associate with the Dinobots edged weaponry. For the life of me I can’t remember whether the G1 toy came with a gun, but I’m almost positive he didn’t. Just those two missile launchers. I’m guessing that plastic went into the Prime Armor. 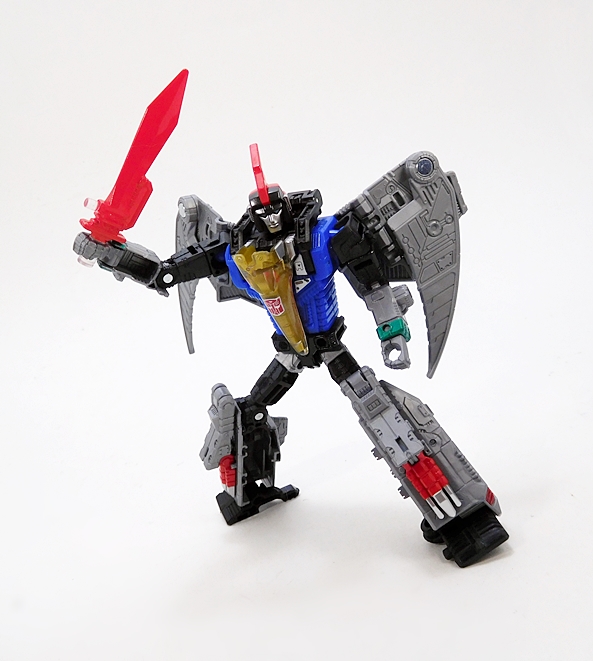 As much as I loved just almost everything about Slug (apart from his size), I think I dig Swoop here even more. His size isn’t quite as big an issue because of the nature of his alt mode and he always was the smallest of the Dinobot crew. The omission of his missile launchers, on the other hand, does irk me a bit, but like I said, maybe someone will step up and remedy that. In the meantime, Swoop and Slug look fantastic together and I’m getting really excited about completing this team. Next week, I’ll have a look at the newcomer to the Dinobots… Legends Class Slash!

2 comments on “Transformers “Power of the Primes:” Swoop by Hasbro”