Oh dear god, it’s been a rocky road to completing this wave. I started it so long ago (July of last year!) with DCTV’s Supergirl, and the mediocrity of each figure has worn me down to the point where I’ve had to space these reviews out just to avoid having to dread the coming of DC Friday. Well, today I’m finally going to kill it off with a look at the last two packaged figures, Mutant Leader and Lex Luthor, and finally the one reason I suffered through all this… The Collect & Connect Doomsday figure. I feel like I should apologize in advance, but it’s too late for that now. 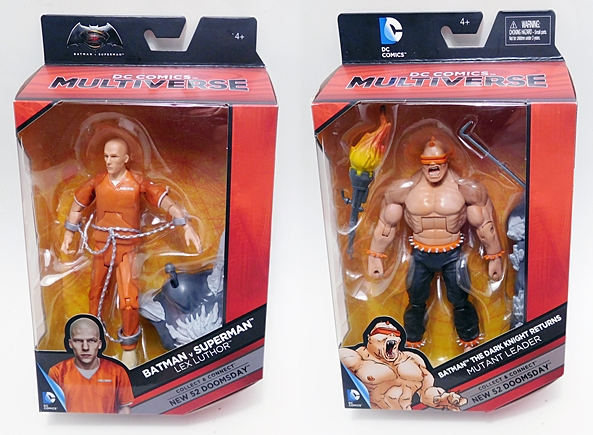 Here are the packaged figures. I’ve got nothing more to say, so let’s just start with Lex Luthor, because I want to get him out of the way quickly so I can toss him in the garbage. I was originally going to just post a picture of the figure and let that speak for itself, but no, let’s do this. Let’s fully diagram the anatomy of a fail. 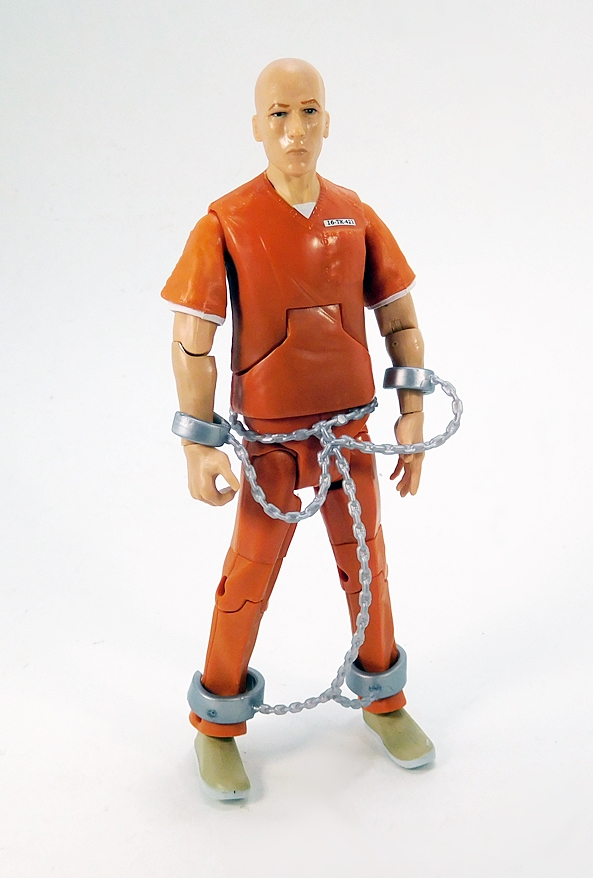 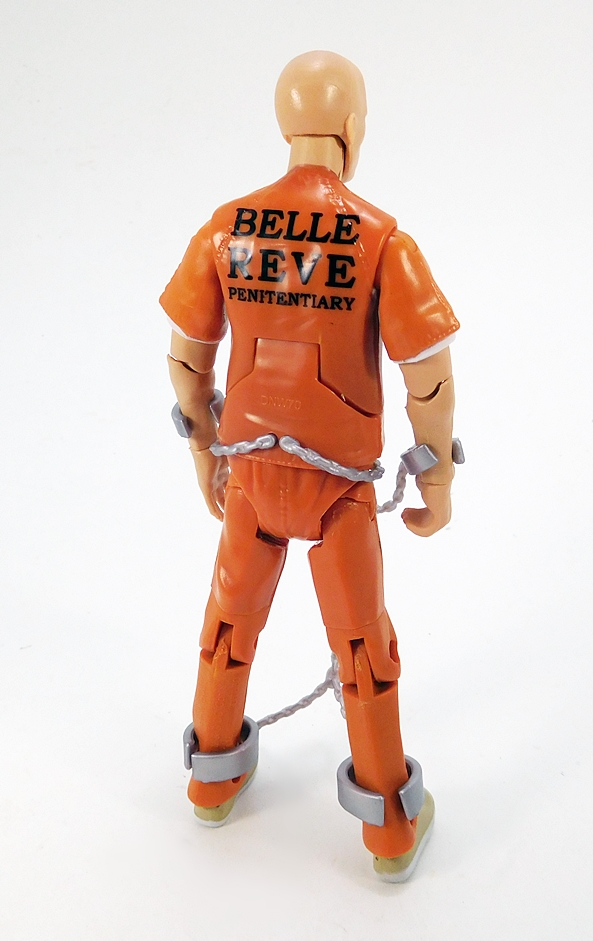 So, it literally makes me sick to own an action figure based off of Jessie Eisenberg as Lex Luthor. No, really. Let me tell you how I really feel. Of all the things wrong with that abomination of a movie, the casting and treatment of Lex shines like a beacon of shit in a fog of missteps and terrible ideas. But seeing as abstaining from this purchase would have put me just one C&C part away from my goal, I sucked it up. My only hope was that with the DC Multiverse likenesses being so poor, I could pass him off as a comic Luthor. But it was a red herring anyway, because this figure is so god awful, I don’t even want it in my house. When you’ve been making action figures as long as Mattel has, how do you screw up a guy in prison overalls? The buck looks so awkward, thanks mostly to that torso. Mattel can’t even be bothered to give Superman an ab crunch, but they have to stick a huge ugly one in the middle of this figure. Also, the sculpted details on the jumpsuit, like the pocket and the collar, are so soft they might as well not have bothered. I could probably make a better looking guy in a jumpsuit out of Playdoh. Oh yeah, and let’s give him and nobody else in the wave thigh swivels, because that makes sense, right? 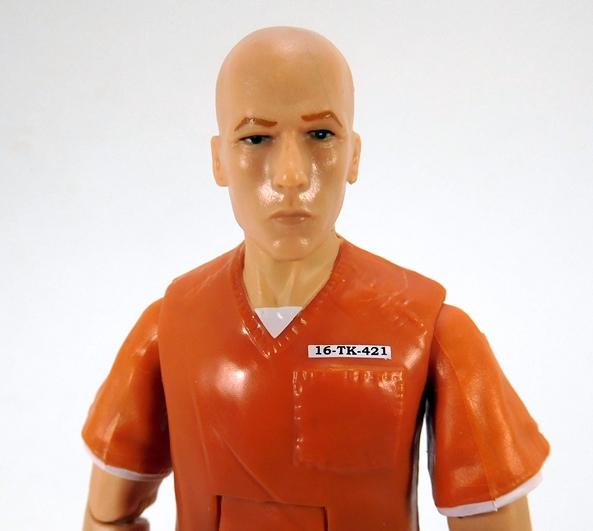 As I said, I was hoping the head sculpt would just pass for generic comic Lex, but it really does look like a horribly misshapen Eisenberg. I know, that’s kind of redundant, but whatever. This portrait makes me wish I was 6-inches tall, so I could punch it. Also, what’s up with his prison number? That’s a weird place for a Stormtrooper reference, but I can’t believe it’s a coincidence. 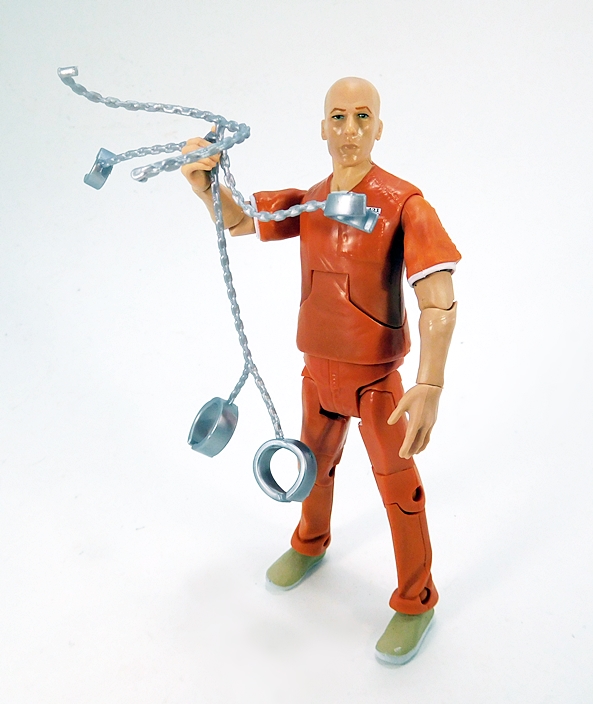 The only positive thing I can say about this figure is that the chains come off, so if you want to use them for one of your DCUC villains or another figure, that’s an option. They do peg into the back of this figure to hold them in place, but I would imagine they’ll still work on other 6-inch scale figures. I’m going to save mine when I toss this figure. And that’s all I’m going to say about Lex here, other than I feel bad I’m wasting space on my server with four pictures of him. Moving on to The Mutant Leader… 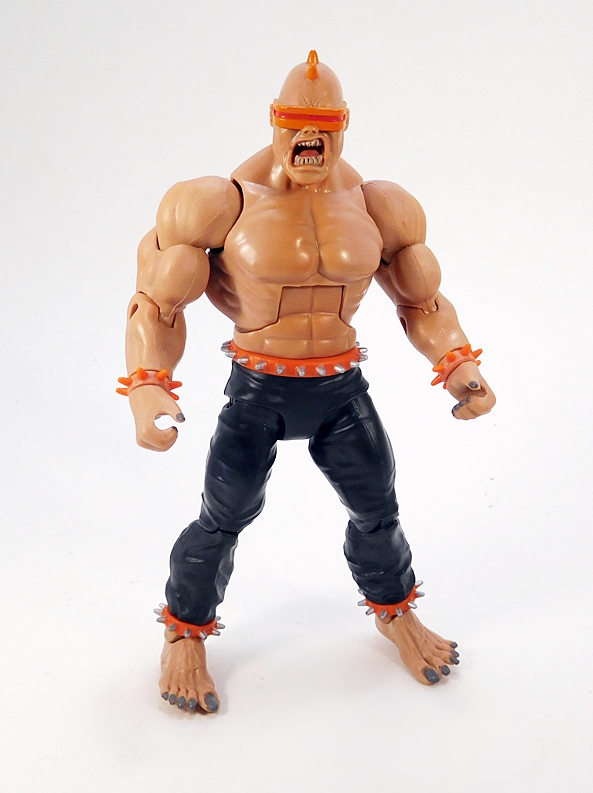 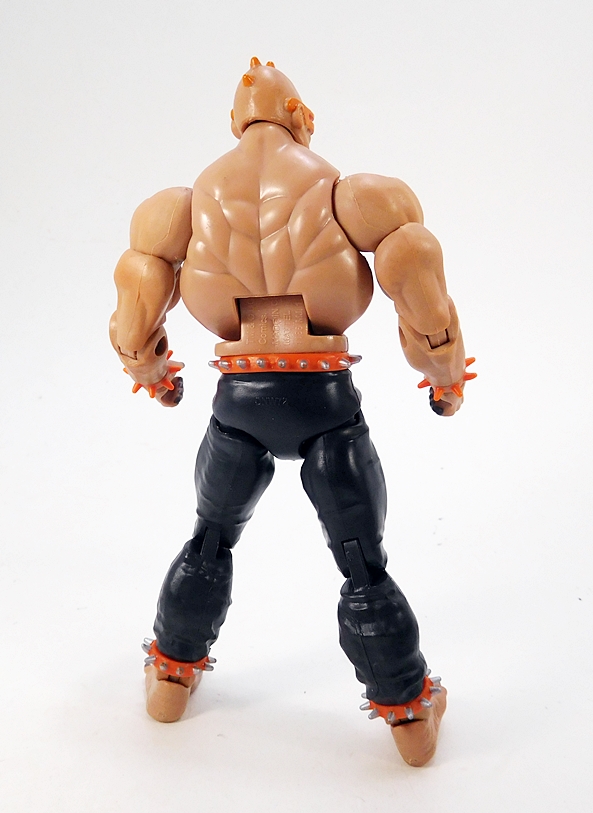 If there was any semblance of a theme to this wave, I guess it was The Dark Knight Returns. At least three figures in the wave share that common source. And the DKR figures were probably the ones I was most excited for. Batman and Robin put a damper on that excitement. I don’t think they’re as bad as Lex up there, but I found them to be on the low end of average. I was hoping Mutant Leader could right this ship, and as it turns out, I think he’s pretty OK. Granted, a lot of him is just a muscular buck in pants, but there are some nice flourishes of detail, like in the spiked belt, as well as the wrist and ankle cuffs, and especially in his gnarly mutant feet. Articulation is fair, but he’s missing some obvious things like thigh swivels. 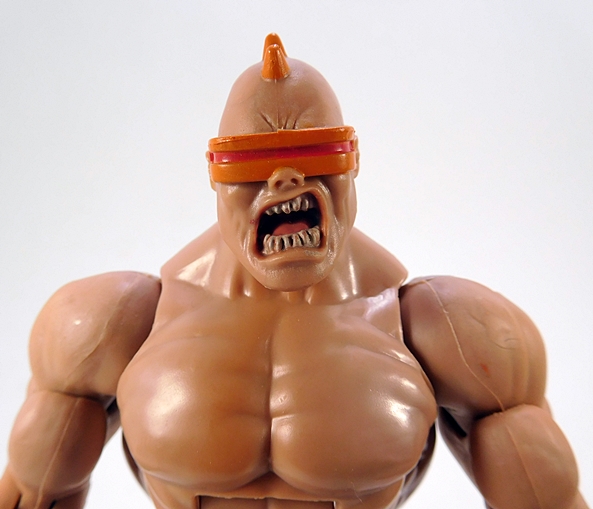 I really dig the head sculpt on this guy. Not only does it capture the character pretty well, but the attention to detail in the open mouth goes above and beyond for this line. The expression is great and the way the facial detail disappears behind the visor makes it almost look like it could be a separate piece. I don’t have a lot of praise for any of the other portraits in this wave, so it’s nice to see at least one figure succeed on that front. 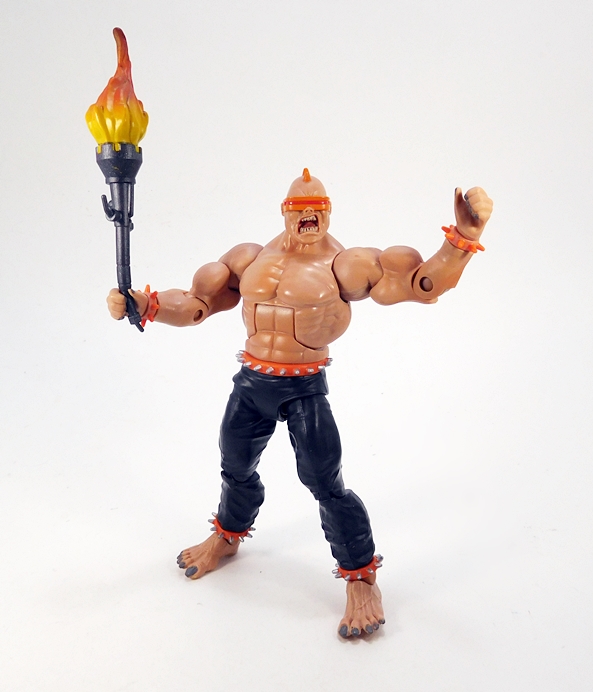 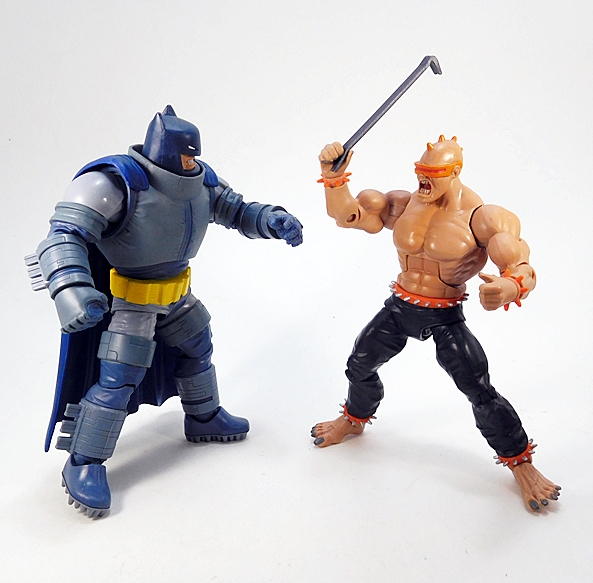 The Mutant Leader also excels in the accessories category. Well, he has two. First off, he has a big torch that looks like it’s welded out of junk and features a big cartoony flame blooming off the top of it. Secondly, he has a crowbar. Neither of these are anything special, but at least he comes with some stuff. And with that final ringing endorsement of the packaged figures, let’s take a look at the figure that led me through this morass of plastic despair… Collect & Connect Doomsday! 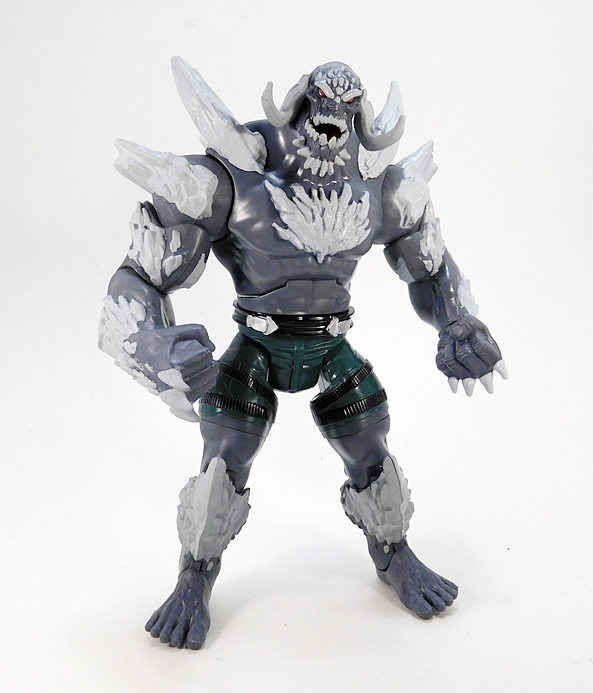 And hell, yeah! This is a pretty damn good figure. I missed out on Matty Collector’s version from a few years back, and that bad boy has since escalated on the second hand market close to the $200 mark. There was no way I was ever going to pay that, so building this version seemed like a fair consolation prize, and I really do love how he turned out. I was up for an uphill battle, however, putting him together. The arms did not want to go in the sockets, and the rotating hinges in the shoulders were fused. It took some work, but I finally got him assembled and all the joints working fine. Doomsday has never been a favorite of mine, but he’s an important enough character in the DC Universe that his absence from my shelf was pretty obvious. 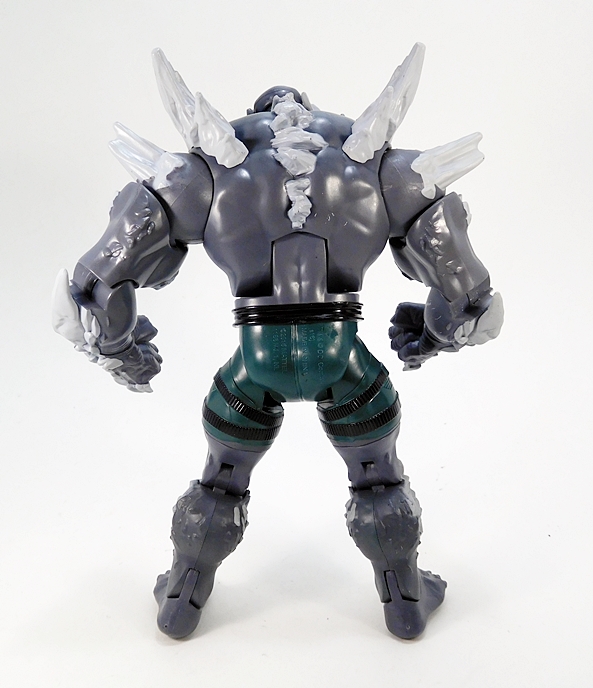 The build on this guy is great, the sculpted tufts of white fur look good, and you get some nice detail on his shorts. The craggy spikes coming off his back and shoulders are really cool, and I love the spikes on his knuckles. The coloring is pretty simple, but the gray and white deco looks good and you get some green and black in the pants. 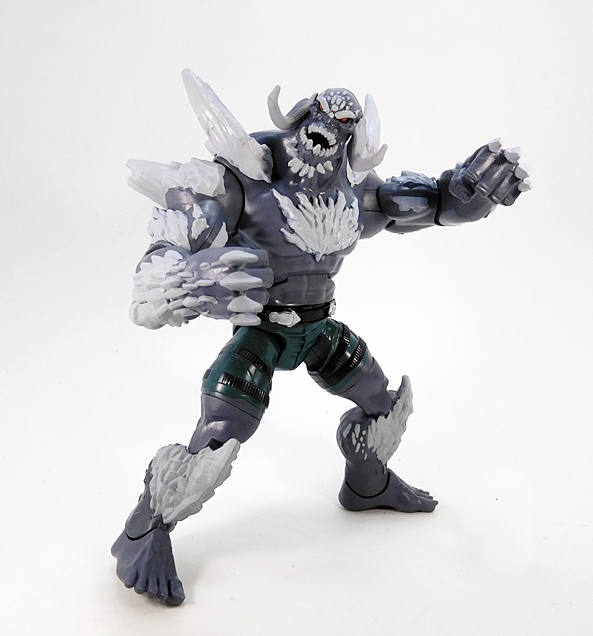 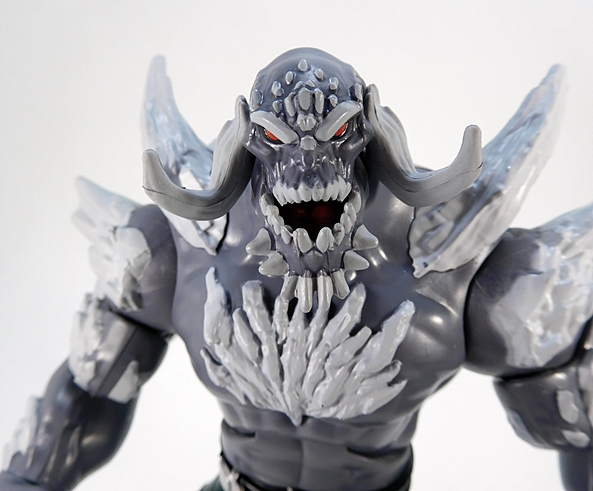 The head sculpt is also fantastic. I love the open maw surrounded by a full mouth of white teeth. The rocky mess on his forehead is all individually sculpted, and those beady red eyes are superb. There’s a huge disconnect between the quality of work on display here and that seen in the individual figures of this wave. 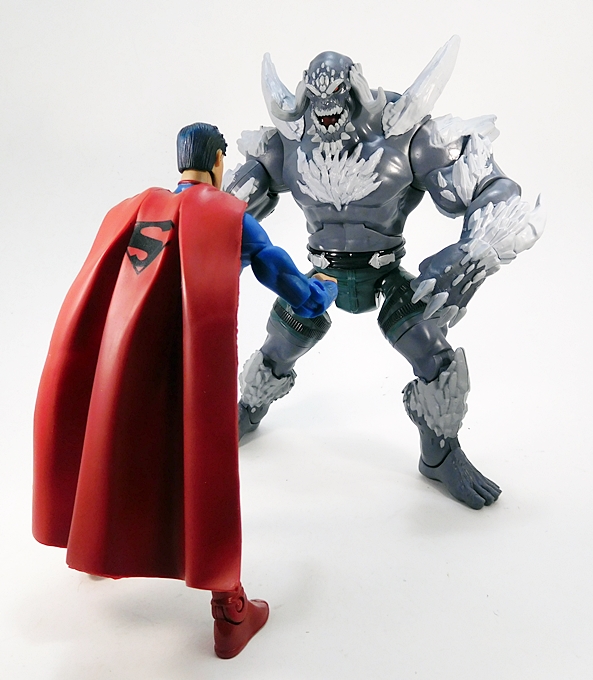 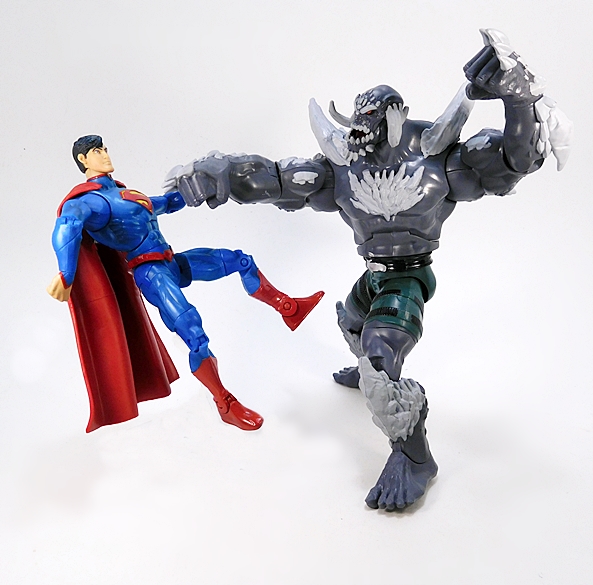 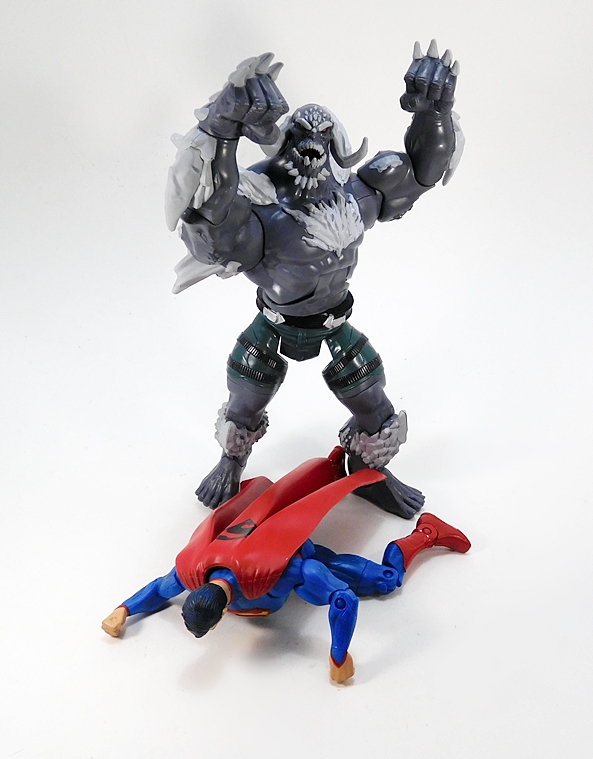 So was it all worth it? Absolutely. I love Doomsday, and I’m especially happy to see that he displays really well with Mattel’s New 52 Superman from a little ways back. I’m still going to keeping an eye on the Doomsday and Superman boxed set that DC Collectibles has out on the market right now. If it drops significantly in price, I’ll likely give that one a try as it also looks like a superb piece of work. 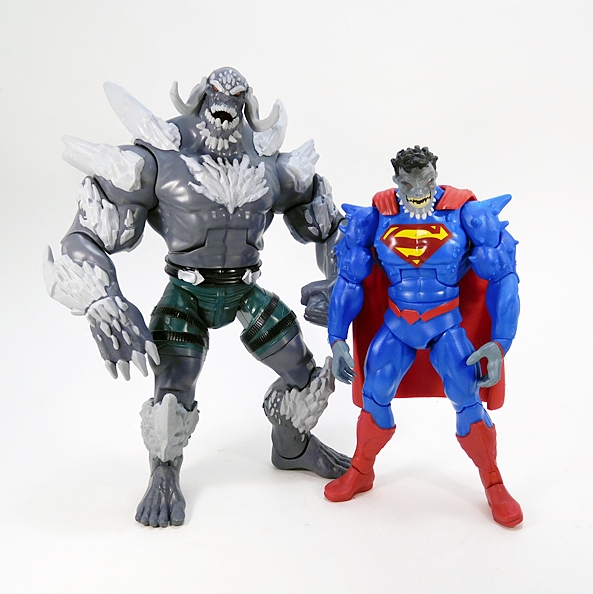 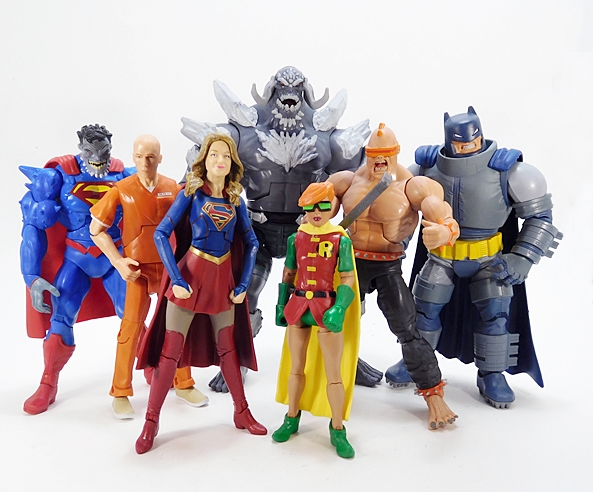 Of course, when I say buying this wave was worth it, I should point out that the only one I paid more than $10 for was Supergirl. The rest averaged around $5-6 a piece. Even at that price, it was tough to drum up a lot of love for this motley wave. It’s tough to look at this group shot and realize that this is the same company that did DC Universe Classics not so long ago. It’s even harder to consider that this collection of figures netted around $120 at retail when they were released. It’s no wonder, I can’t find any of the current figures on the pegs, because the stores near me are still choked with Batman, Lex, and Mutant Leader. All I know is that if Mattel or DC Collectibles can’t get a decent cohesive line of action figures going, DC Fridays are going to become a thing of the past.