Hot Toys and impulse buy aren’t usually words that go together, at least not for a working stiff like myself. But last week on Amazon, some Marketplace sellers have been blowing out some of their First Order troopers from The Force Awakens at prices that I just couldn’t refuse and before I knew it I was clicking away a large chunk of monies. The first one I went for was the Snowtrooper Officer, mainly because I dig the design so much and I was happy to see these guys turn up again in The Last Jedi on Crait (as Salt-troopers?), because it makes this review just a little less dated.

If this is your first trip to the Star Wars Hot Toys rodeo, you should know that the boxes all feature the same stark black-on-slightly-less-black decos so they do all match, but to me they aren’t very visually striking. Indeed, the only art here is a nice photo of the figure on the front panel. But what these boxes lack in artistic value and eye candy they make up for with overall construction. These shoe-boxes are very much like the higher quality boxes Hot Toys used to use for all their lines before moving to the flimsier window boxes in sleeves. And there’s something to be said for that when you’re paying a lot for a figure and want to store the extra pieces in something other than a Ziploc bag. You also get a really nice illustrated cardboard insert placed over the tray, something that Hot Toys also used to do. Inside the box, the figure comes on a single tray with all his extra bits flanking him on both sides.

The First Order Snowtrooper comes out of the package all bundled up and ready to hunt Resistance scum through the snowy tundras or clear out their icy hidey-holes. Now, I’ll be the first to admit that the classic Imperial design is tough to beat, but I’ve really come to love the new First Order look, possibly even a wee bit more. Either way, the design makes for an interesting figure in this scale because of the mix of plastic armor and fabric. Indeed, I don’t think I really realized how much of this uniform was fabric until holding this figure in my hand. It’s just not something that I got a sense of with Hasbro’s 6-inch version, and it’s not like these guys were on screen all that much.

The underlying suit is beautifully tailored with some lovely quilting effects on the arms and legs, as well as immaculately stitched borders running down the front of the suit and the edges of the kama. He has a pair of knee pads attached with elastic straps and below that is all sculpted plastic leading down to the boots, with black paint applied to the sculpted straps. Moving up from there, he features a codpiece, armor sleeves on his forearms, and a chest and back-plate with the shoulder armor attached with flexible straps. The most striking thing about this figure for me is how shockingly bright all the white is. He’s like a walking advertisement for bleach. This is a figure that makes me want to scrub up before handling him, like I’m going into surgery, for fear of leaving a smudge on the fabric. I should also say how much I dig the contrast between the shiny armor pieces and the fabric of the rest of the uniform, both in texture and finish. 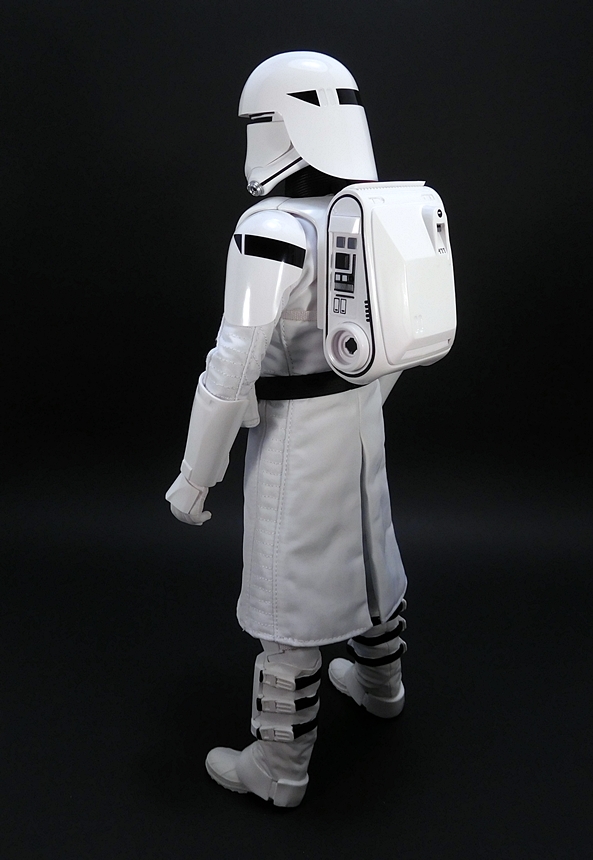 The black belt around his waist features two pouches, which are basically fabric wrapped around boxes to help them keep their form. They’re non-functional, and I’m not sure what he’s supposed to keep in there. Maybe rations or just extra power magazines for his blaster. The backpack features some great detailing on the sides, and attaches very simply by sliding it onto a triangular tab. It’s easy to take off, but it also holds on very securely. I’ll also note here that the predominantly fabric uniform makes this Snowy a lot of fun to play with. There’s still more restriction than I would like in the legs, but the arms have a lot more range than Hot Toys’ regular First Order Stormtrooper, which is a pleasant surprise.

The only thing that I can tell that sets this guy apart from the rank-and-file Snowies is his right shoulder pauldron. This piece of flexible plastic has a leather-like texture and is painted with a deep red finish. The head is easily removable, but it looks like the pauldron is attached to the armor pretty well. It may be possible to get it off if you want to convert him to a regular trooper, but that’s not something I’m going to risk messing with. I’m guessing this could be intentional so that Hot Toys could sell more of the Officer and Trooper two-packs. 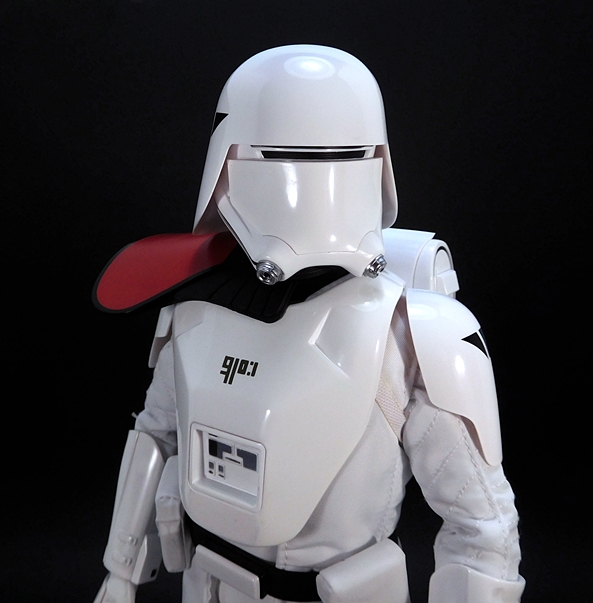 As for the helmet itself, it’s a great piece of work. The nearly featureless, and totally flawless, smooth curves make it super creepy and intimidating to me. It features black markings running around the back to the sides, a narrow, visor, and two silver caps on the end of his breather units. Like all the armor pieces, the helmet features a super glossy finish. 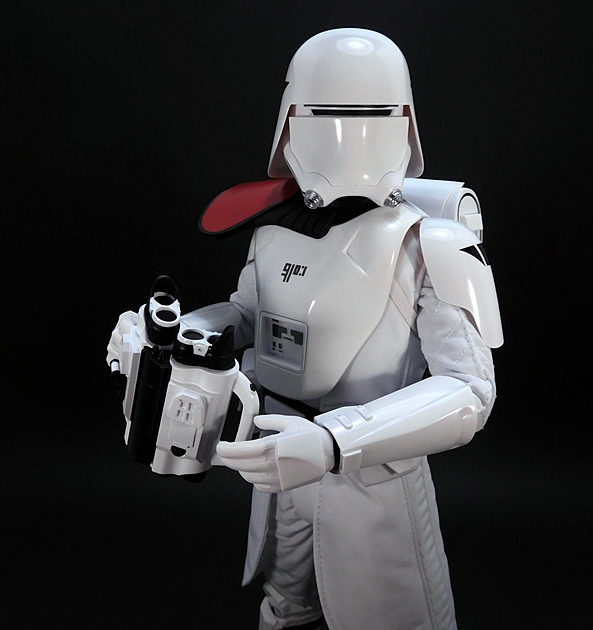 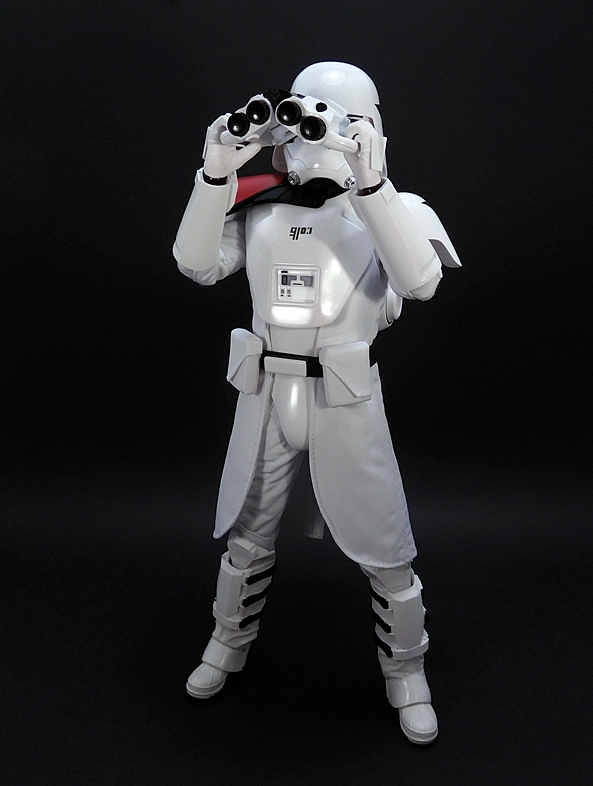 As expected from any Hot Toys offering, the Snowtrooper comes with a hearty helping of hands, which are fairly easy to pop on and off. You get a pair of fists, a pair of relaxed hands, a pair of weapon holding hands, a single left hand with the fingers opened, and a pair of accessory holding hands. The accessory holding hands are designed to work with his binoculars. The binoculars were a nice surprise, as I didn’t know they were included. They’re satisfyingly large, beautifully detailed and have a hinge in the middle to fold them up. They’re also pretty rugged, making it easy for the trooper to hold them and I was happy to see that the articulation allows for him to hold them up to his face. Am I ever going to display him with these? Probably not. If I had more than one of these guys on my shelf? Then definitely. 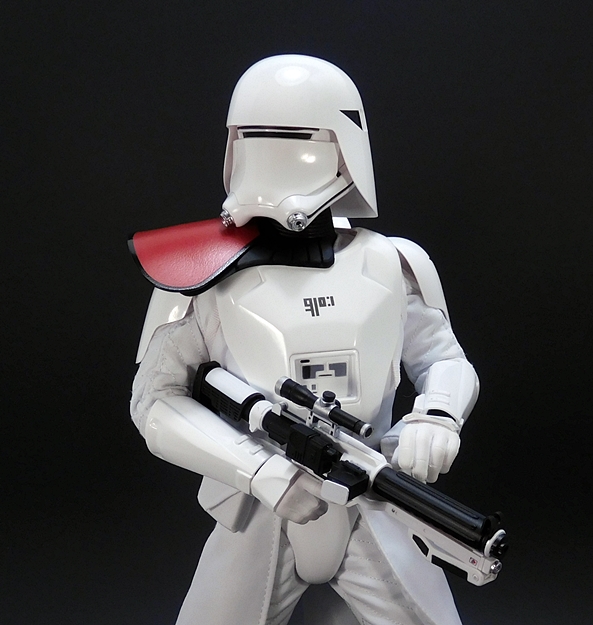 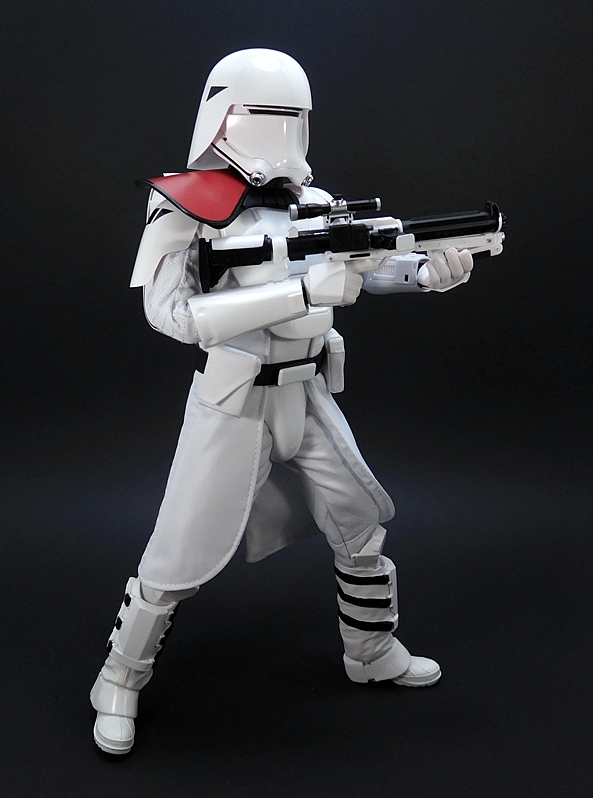 His only other accessory is his blaster rifle, the E-11D, and this has got to be one of the sexiest weapons in the Star Wars Universe. One of my favorite things about the First Order design aesthetic is the addition of white paint to the Stormtroopers’ weapons. It really makes the designs pop and look so much more distinctive than those of their Imperial predecessors. This scoped blaster features a telescoping stock and a fold down grip under the muzzle. It’s a striking piece of futuristic military hardware. Unlike the binoculars it does have some delicate parts, but the articulated parts seem to allow for a little give to help minimize breaking.

Finally, the figure comes with a hexagonal stand that is identical to the type used for the previous First Order releases. The base features the First Order emblem and the front reads “Star Wars First Order Snowtrooper” so, no it does not denote this fellow’s rank. Attached to the base is a simple post and crotch cradle to help keep him vertical. It may not be flashy, but I really appreciate it’s simple design and the fact that it doesn’t take up much space on my shelf. 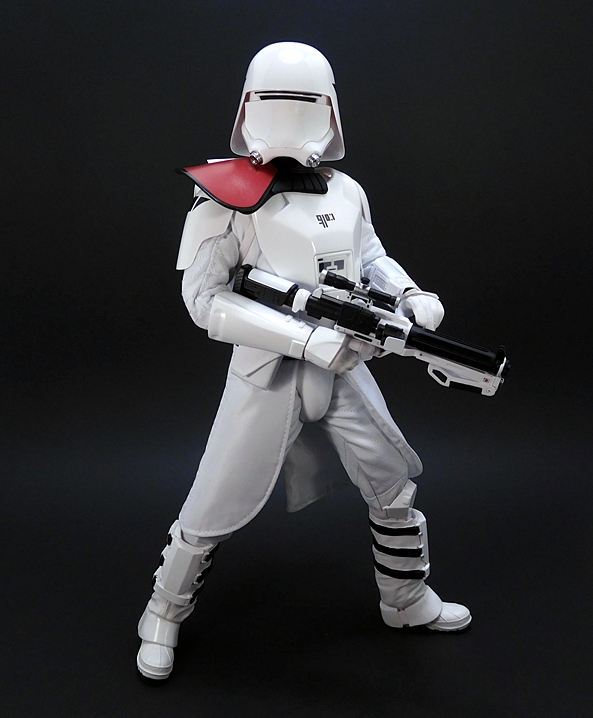 When it comes to Hot Toys, I tend to avoid the “Troop Builder” type figures, because it’s a dangerous road to go down. Even now, I find myself wanting to pick up a regular Snowtrooper to display next to this Officer and keep burning myself with cigarettes every time the thought comes up. But the truth is, one of the reasons I try to resist these is that the Troopers tend to be priced right in line with the regular Hot Toys releases, and I have a hard time swallowing that. Case in point, This Snowtrooper retails at $219 over at Sideshow. I’m not saying there isn’t a great amount of craftsmanship at work here, indeed he’s a gorgeous figure. But I’m taking into account that they didn’t have to sculpt and paint a likeness for his portrait, they don’t have to pay an actor for the likeness rights, and he doesn’t come with a whole lot of accessories. Also, they knew they were going to be able to sell at least one variation of this guy too. All that conspires to make me feel that Hot Toys could have snuck these in at under the $200 mark. Maybe that’s why some retailers are slashing prices. When this guy turned up on Amazon for $139.99, I didn’t even have to think about it. And yes, I will eventually get around to reviewing the First Order Stormtrooper that came with Finn. I just need to find the time to go into the storage and find his box.