Did you know that one of my favorite pastimes is drinking a bunch of Jameson and trawling the Interwebs for prize figures? Yup, I’m a man of simple pleasures. They tend to be pretty cheap, so I can’t get into too much trouble, but as a rule I keep seeing a lot of the same stuff over and over again so I don’t end up buying a lot. But just often enough something new pops in and surprises me, and last time it was this Flag Diamond Ship series by Banpresto. I call it a series, but I’ve only been able to find two so far, Boa and Nami, and I snapped up both of them pretty quickly. Maybe there will be more, who knows? I want to go straight for the Nami, but since I just looked at her Variable Action Hero a couple weeks back, I’m going to open up Boa today for Anime Saturday!

The box is pretty typical prize figure fare, albeit it’s bigger to house this 9-inch scale figure. Yeah, when it comes to prize figures, I tend to think 6-inches or smaller, but despite the CRANEKING logo on the box, Boa is not your average prize figure. The enclosed box shows plenty of photos of the figure inside, although it’s a bit on the flimsy side and mine showed up a little rough around the edges. As for what this series is all about, I’ll let the box speak for itself, “Our aim was to create a figure that exudes the female form, including an amazing hourglass figure, ideal lady curves, and proportional balance.” OK! That’s quite a mission statement… and in English no less! Inside the box, Boa comes wrapped in plastic and with a little assembly required. Her head needs to be attached and her right foot needs to be fitted to the base. 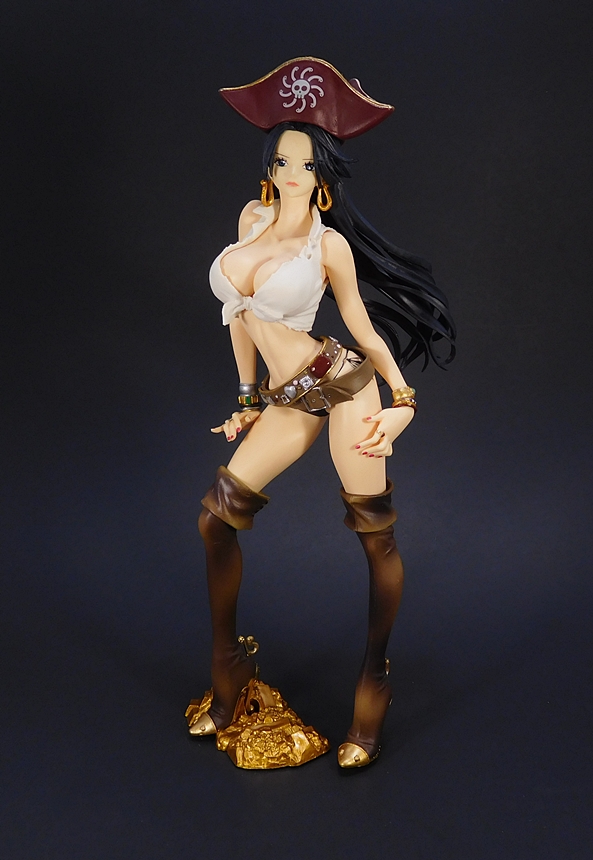 Out of the box, Boa strikes a pose with her right foot on a pile of gold, her hands resting on her hips, and her formidable cannons out front and center. It’s nothing terribly creative from a composition standpoint, but at least they resisted the urge to full on Captain Morgan and have her knee up higher and her foot up on a chest. As for “exuding the female form,” I think they’ve achieved their goal at least within the framework of the ridiculously sensationalized anime perspective. In short, I love it! 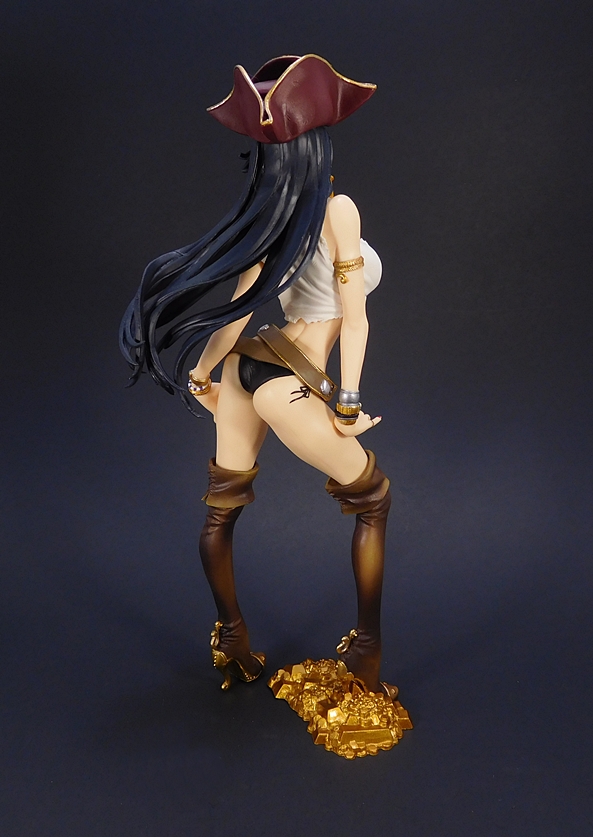 The costume is not a traditional look for Boa, but rather a sexy take on the swashbuckling pirate look that I really enjoy. She’s got a ragged cut top that just manages to contain her ample chest, and is tied in the front. The rest of the costume consists of a a skimpy pair of black panties which are mostly obscured by a pair of wide belts, thigh-high high-heeled boots, lots of bling on her arms, and a very iconic looking tri-corner pirate hat. 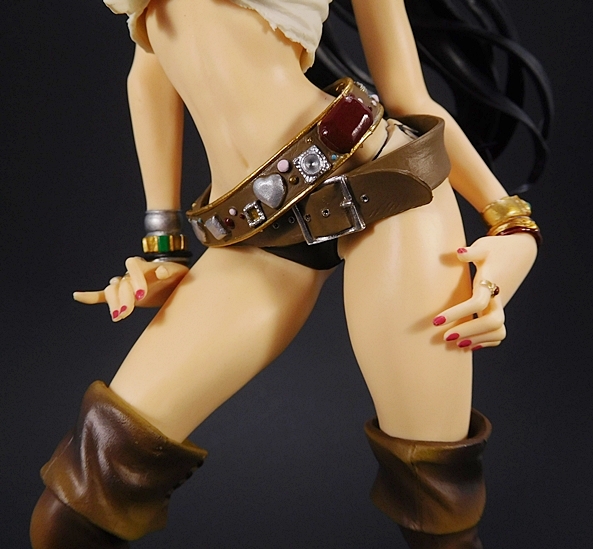 The sculpted detail here is pretty fantastic. The buccaneer boots have rumples in all the right places, as well as ornate golden fixtures on the heels, toes, and backs of the ankles. You get little sculpted cross-stitches on the backs of the thigh cuffs. The use of gradient shades of brown on the boots looks especially nice. The belts are sculpted as separate pieces and include all sorts of fixtures and ornamentation. As good as the sculpt is, there are some solid paint applications to back it up. From individually painted bracelets to the fingernail polish, they really went all out on this figure.

The portrait offers a solid recreation of the character from the series with perfectly printed eyes and lips. My only main nitpick here would be that she’s void of all expression. I’d like to see a little smirk or smile, or determination, but she’s kind of just a blank slate. I guess this figure has enough personality in the outfit to carry the day. I’ll also say that the hair sculpt could have been a little more refined, especially the strands that spill down the side of her face. The earrings are a nice touch and I really dig the pirate hat, which features some leather-like texturing.

The base is kind of a mixed bag. I appreciate them trying something a little different from the usual disk, but what we got doesn’t work all that well. It’s basically just a little pile of treasure that you slip her foot into. The problem is that if I slip her foot so it’s flush with the bottom, she doesn’t stand straight, so I had to experiment a bit to get it to work and when it is working, the base itself isn’t usually even with the surface it’s standing on. So, points for creativity, but I have to take them back again for pure execution. 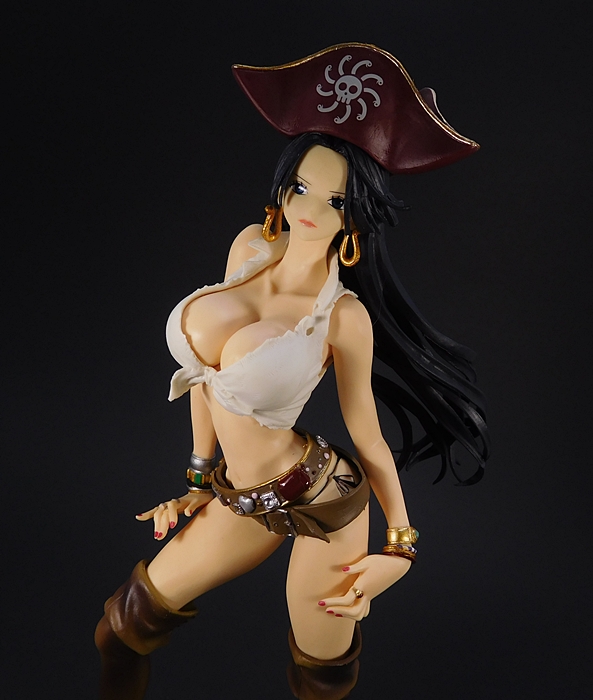 The base notwithstanding, I’m really impressed with this figure. She cost me around $30, which is admittedly a lot more than I usually spend on prize figures, but when you consider the larger scale and that this figure really sports some premium paint, I think the price is justified. Since it was the first time I saw her and I was pretty inebriated, I didn’t really do a lot of deal hunting. Also, this is the first Boa Hancock figure in my collection, so I feel good that I’m expanding beyond Nami for a change. Next week, I’m probably going to check out another Figma, and after that I’ll circle back to open up Flag Diamond Ship Nami.