Welcome friends… It’s DC Friday and… oh. Sorry about that. Force of habit. DC Friday is still on hiatus and just to rub a little salt in the wound, I’m checking out a Marvel Legends figure on DC’s turf. I’m not trying to be a dick about the fact that DC doesn’t have a comparable action figure line, honest! If they did, DC Friday would still be going strong. As for today… well, I happened to find Mr. Fantastic while running into Walgreens for a frozen pizza and I really want to open him up without cutting into my already over-booked Marvel Monday slots. And like I said, it’s not like I have any new DC stuff to look at here yet. The DC Multiverse pegs in my area are all still full of the Wonder Woman movie wave. And unlike Marvel Legends, the recent DC Multiverse releases sell for scalper prices on Amazon. Maybe I’ll pick up one of the many DC statues on my want list, but for now let’s thank to Reed Richards for stretching his way in to save the day!

If you’re keeping score at home, Mr. Fantastic is the third member of Marvel’s First Family to get an exclusive Walgreens release in the Legends line, right behind Sue Storm and her brother Johnny. And now that we finally saw some production shots of The Thing, we know Hasbro and Walgreens are riding this one to the end. Unless, you wanna give us The Amazing Bag-Man, Hasbro, because I’ll happily take that figure too! To say I love The Fantastic Four would be an understatement of epic proportions. It’s one of a handful of comics that I’ve been reading since I was a kid, it’s one of my overall favorite Marvel Comics series of all time, and well… I miss it a lot. I’m misting up a little right now. These figures do help, though.

As far as the body goes, Reed is more or less exactly what I was expecting: A painted costume on a generic buck. That’s not a knock on the figure, as it fits the bill perfectly. The blue matches the shade used for Sue Storm pretty closely, but it might be a shade darker here. Naturally, you get black paint for the boots, gloves, and belt. The “4” emblem is printed neatly on his chest, and you get more black around the collar. There isn’t really any unique sculpting needed to make Reed stand out, and the costume looks… well… fantastic. 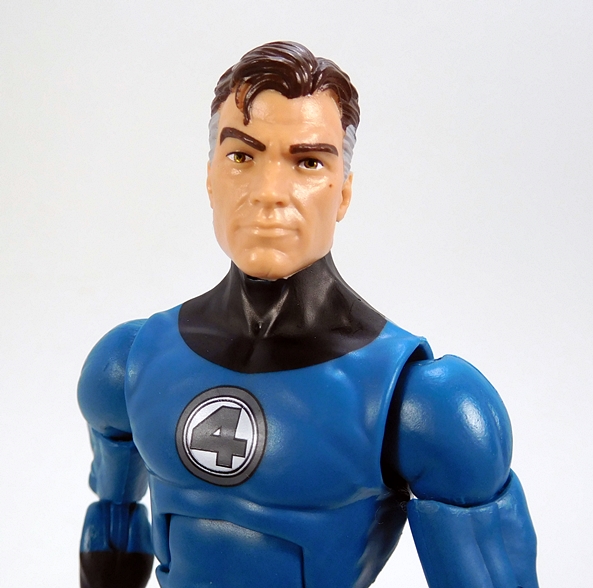 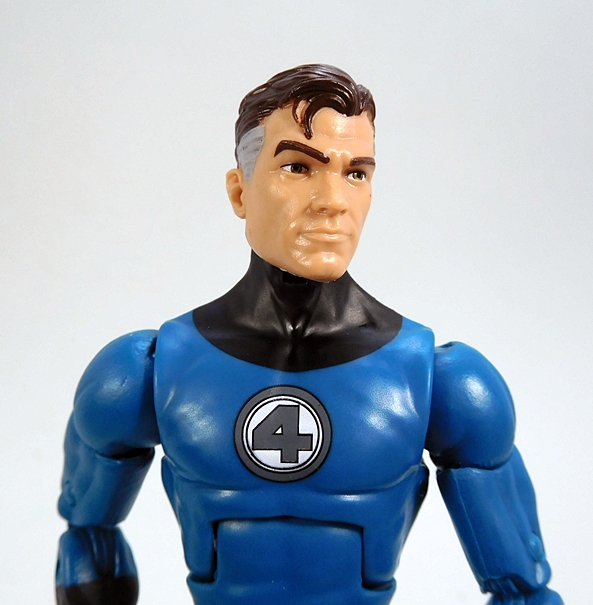 The head sculpt is also a winner. The definition in the facial features is very well done, his eyes are straight and sharp, and I really dig the one raised eyebrow suggesting that he was fascinated by something while doing the science. The sculpted hair features a few stray licks over his forehead and his trademark gray wings look spot on. My figure does have a birthmark just off to the side and below his left eye. It’s actually a flub in the paint, but I’m choosing to call it a birthmark, dammit! I think this is an all around excellent likeness to the character that I know and love. And sometimes hate to love. And other times love to hate.

The articulation holds few surprises for a modern Legends figure. The legs have ball joints in the hips, double hinges in the knees, swivels in the thighs, as well as both hinges and rockers in the ankles. The arms have rotating hinges in the shoulders and wrists, there are swivels in the biceps, and double hinges in the knees. The torso features a waste swivel as well as an ab crunch hinge. The hinge is placed a little awkwardly, and while I don’t think it would have worked on any other character, it gives Reed a very little bit of an elongated look that fits his special abilities. Lastly, he has both a hinge and ball joint in the neck. 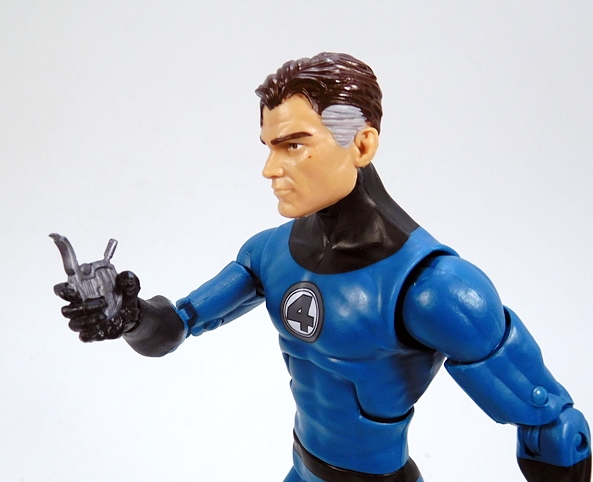 Reed does come with one accessory and holy crap, it’s The Nullifier! I remember bitching about getting Phlish instead of The Nullifier back when Nova came out. Now I can’t remember why I was so hell bent on getting this little lump of gray plastic. But hey… Nullifier! 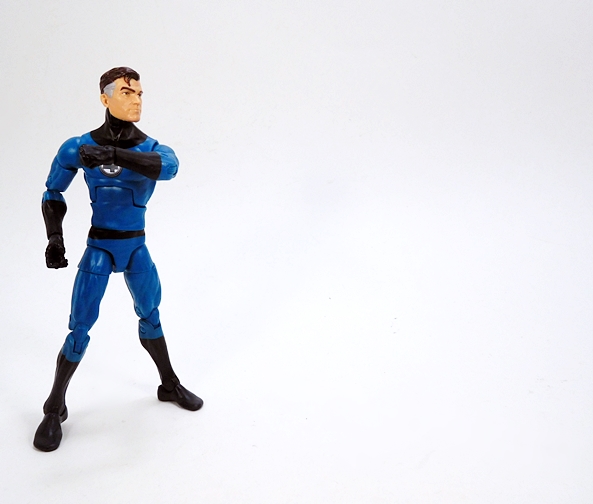 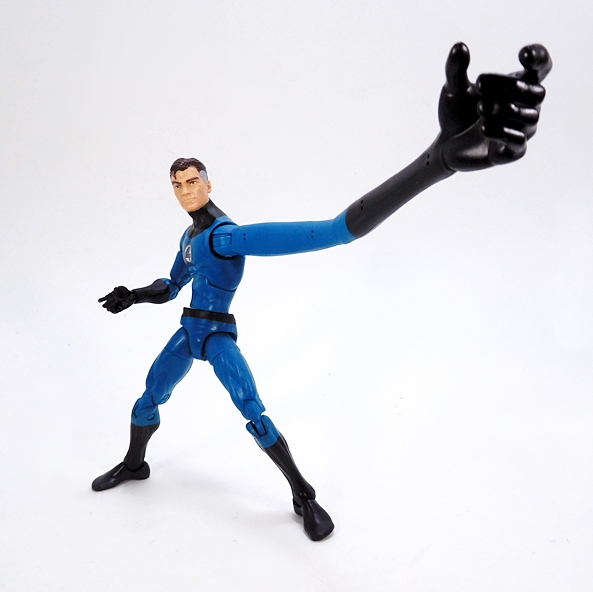 Of course, the big draw in the package are the swap out stretchy arms. When I heard that the FF were going to be Walgreens exclusives, I was really worried about Hasbro cheaping out on these and I honestly wasn’t expecting to get any stretchy parts with Reed. Oh boy, am I glad to be wrong on that one. The regular arms just pull right out at the shoulders and the stretchy arms pop right in, easy-peasy. They do have a bit of bend-ability to them, but nothing too crazy. They do, however, make the figure loads of fun. I bought every version of Reed that Hasbro put out in the 4-inch Marvel Universe line, but it’s so cool to finally get him with some stretchy parts. 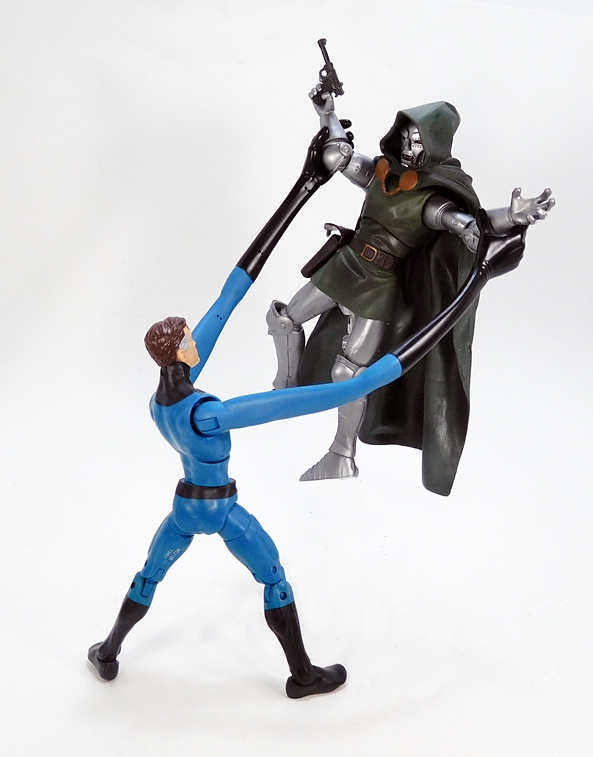 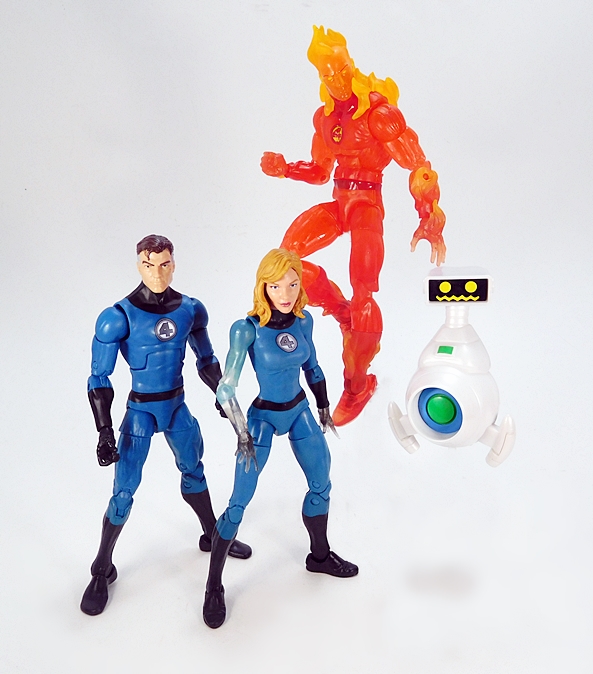 Seeing just the three of the Fantastic Four assembled on my Legends shelf gives me the warm and fuzzies. It’s not lost on me how many things about these figures feels like a miracle. The fact that we’re getting toys at all with the comic having been cancelled is one thing, but actually getting them as Walgreens exclusives is also pretty crazy. But frankly, this whole Walgreens partnership has been working out wonderfully for me. I have some chance of finding Target Exclusives, almost no chance at Walmart Exclusives, zero chance at Toys R Us Exclusives, but I’ve never had a problem finding any of the Walgreens ones, and I don’t even have to hunt. Indeed, the one right around the corner has been a goldmine for all kinds of Marvel Legends waves.