Holy shit, it sure was weird to type that title, and yes the first time I did it, I typed “by Mattel” out of sheer mucle memory. Nonetheless, when Mattel decided to shut down Matty Collector it didn’t mean the end for Masters Classics. Nope, instead they turned over the reigns to Super7, a company that I knew only as the ones that gave birth to the ReAction figure line before they gave that away to Funko. Although they still do ReAction style figures, so I’m not sure what all happened there. Anyway, Super7 have actually tested the waters and turned out a couple of “Ultimate Editions” of previously released MOTUC figures, but the ones that arrived at my doorstep last week are the first Super7 Masters for me. It’s been a long wait. Indeed, it’s been so long that I couldn’t even tell you when I pre-ordered these. Needless to say I’m really excited to start opening these up!

This is a case of the “Collector’s Choice” assortment, which consists of four all new characters from various corners of Masters lore. Super7 also simultaneously released a “Club Grayskull” assortment, which is a wave of four Filmation-style versions of previously released characters. As much as I’d like to collect the Filmation style, I exercised some rare self control and told myself I wasn’t about to buy a second version of each figure I already own. But four new figures based on characters that haven’t been done yet? I signed up for that in a heartbeat. And then I signed up for it again when the pre-order dropped for the second assortment. The figures were $35 each with the caveat that you had to buy them by the wave, so that meant $139 per assortment and no cherry-picking. I’ll admit that all-or-nothing clause kind of pissed me off at first, until I realized I was going to buy all four anyway. Also, I think if you buy one of the two waves you can cherry-pick figures from the other? I’m not to clear on that point. At least they didn’t make us buy all eight, because if they did I probably would have. Anyway, that’s enough of a preamble, let’s dig into the first figure and he is Lodar!

Well, that sure looks familiar! The packaging is pretty much identical to what we’ve been getting all along from Matty Collector. Each carded figure even comes in the same style mailer box. Now, I do tear these open, so it wouldn’t have bothered me much if they had changed the packaging. Hell, if they shipped them in baggies and knocked some dollars off, I probably would have been fine with that too. But, it’s still nice to get that clear continuity in terms of the presentation. I’ve always loved this package design and if I were a rich man with a lot of space, I’d have doubles of all of these figures to keep sealed. One key difference on the card is that Super7 brought back the bios on the back. Some of you may remember these were dropped from the final figures in the Matty Collector line. I’m happy to see them return, because without it, I would have no idea who Lodar is. His tagline calls him the “Evil Master of Celestial Magic” but he looks more like a thug, and his bio kind of supports that. Apparently he’s from one of the mini-comics and he’s some asshole who captured a city called Targa and enslaved the population. Magic comes into the picture somewhere, but I think, “Evil Slaver Bastard” would have been a better tagline.

Out of the package, Lodar looks like someone who just stepped out of a Road Warrior movie. Only purple. This is a really simple figure, but I have to say I dig him a lot. From the waist down he’s got a typical Masters-style belt but eschews the classic furry diaper for a pair of slick black trousers with a purple, segmented V drawing attention to his groinular region. He’s also got some wicked spikes on the soles of his boots. Above the waist, he’s showing off a lot of that flashy purple skin and the plastic they used is fantastically vibrant. He’s got a pair of spiked wrist bracers, a strap on his right bicep, a half-vest, which is tied at the front with a giant cross-stitch, and a pair of spiked shoulders that he may or may not have borrowed from Beast Man’s wardrobe. 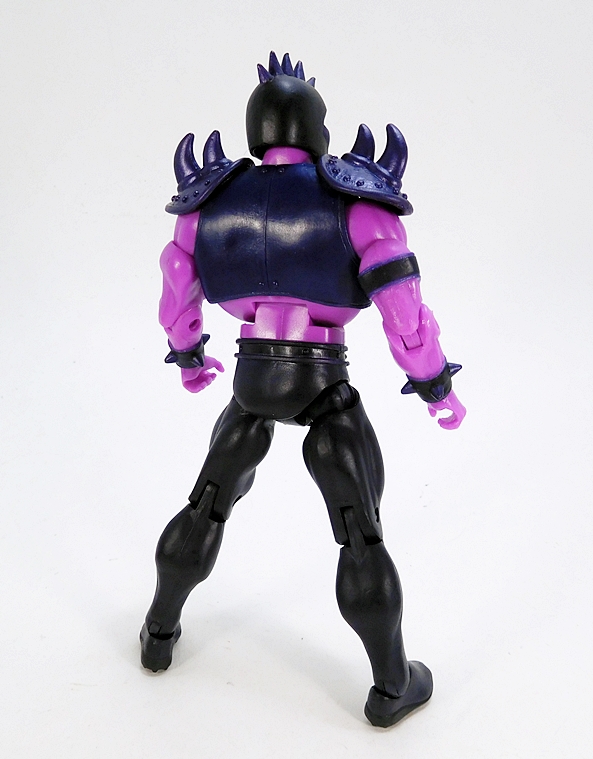 Just about everything about Lodar feels like the same old Masters Classics line.  I know some people were reporting some issues with their figures, but I don’t have any with Lodar. In fact, Matty was getting a little sloppy with the QC on the last batches of figures, and it’s nice to not see any of that evident here. The hands feel a little softer than most of my other MOTUC figures, but that just makes it easier for me to get the weapon in his hand, and he holds onto it quite firmly. The buck seems more or less standard MOTUC fare and I’m not going to break down the articulation because I’ve reviewed over a hundred figures in this line and it’s all been the same. I suppose you could argue that the level of articulation here is getting a bit dated, but I wouldn’t want to see them change things up this late in the game. Oh yeah, he does have ankle rockers, which hasn’t always been the case. 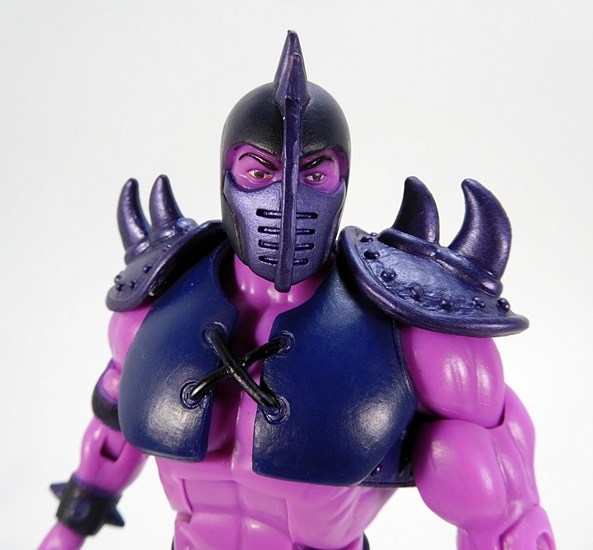 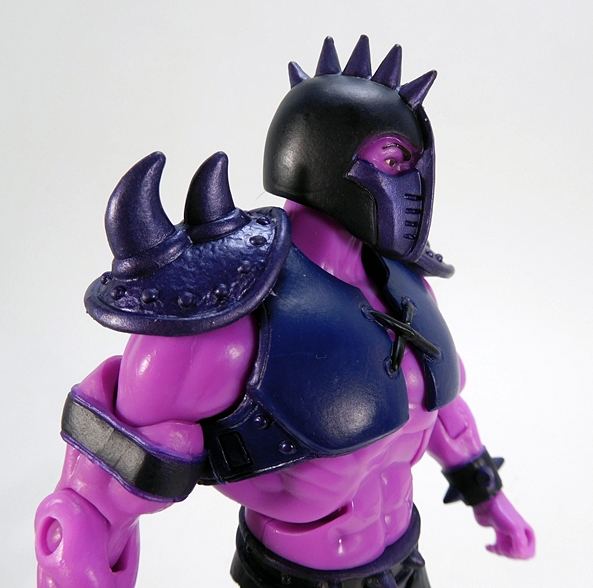 The head sculpt continues to drive home the Road Warrior-y vibe that I get off of Lodar. It’s a tight-fitting helmet with spiked mohawk and a face mask with breather slits. The only aspect of Lodar’s face that’s showing are his eyes. The closer shots show off the hammered metal pattern on his shoulder armor, as well as the sculpted rivets. If this were still part of the actual Masters toyline, it would have been cool for them to give Lodar a post-apocalyptic dune buggy with a skull on the front. Yup, you can probably tell I don’t know anything about this character.

Lodar comes with a nasty looking spiked mace as his weapon of choice. It’s a simple weapon, mostly black with purple spikes and matches his own color palate rahter well, proving that even evil slaver bastards know how to accessorize.

Lodar also comes with this set of manacles and chains attached to a disc, which I presume is supposed to be bolted down to a dungeon floor. This is a fun accessory, especially if you’re into some weird bondage shit with your action figures. The cuffs are made of soft plastic and clip easily around most of the MOTUC figures’ wrists. Ironically, it’s kind of hard to get them on Lodar because of his spiked bracers. The plate their attached to doesn’t actually secure to anything, but a little blue-tack would probably work wonders getting it to stick to the floor or even to a ceiling. 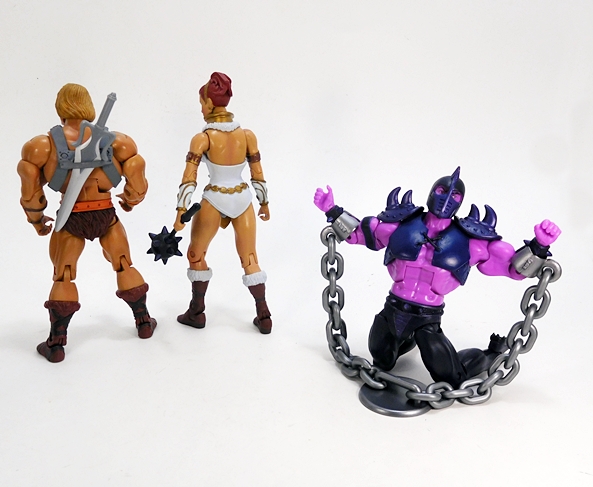 As I think I mentioned earlier, I pre-ordered these figures so long ago that I forgot about them for quite a while. It wasn’t until pre-orders for the second wave came up and Super7 started talking about these shipping out that I started to get really excited. And when they finally arrived I realized how much I’ve been missing this line. After getting at least one MOTUC figure a month for I don’t know how many years, I was really sorry to see the line wind down, although my bank account was probably relieved. There have been some rocky roads between then and now, but I’m delighted to see that Super7 is taking up the reigns and if Lodar is any indication, it looks like Masters Classics is in good hands, I just wish Super7 could have done the same for ThunderCats. Anyway, I’ve got three more of these figures to look at, and I’ll be clearing Tuesdays for the rest of the month to do just that!