Yesterday, I reviewed the last Mythic Legions figure that I had left to open. I also realized how woefully behind I am on that other Kickstarter line that I collect. Boss Fight Studio’s 4-inch Vitruvian HACKS line is well into Series 2, some of which I’ve already looked at here, but I’m still not done opening and reviewing the first series. So, let’s start knocking these out today with a look at the Warrior Skeleton! Ever since I first saw Jason and the Argonauts as a kid, I’ve been fascinated by the images of Harryhausen’s skeletal armies making war against the Greek heroes. So much so, that I was surprised and a little disappointed that the initial offering of HACKS didn’t include any. Well, it took a wee bit longer, but they finally delivered.

I’ve shown off this packaging plenty of times, but I still enjoy it so much. The figure comes in a bubble set on landscape-orientated card with some great original artwork of the character on the front, and a classic “Collect Them All” presentation on the back, along with a bio about the character. Although, today’s figure isn’t a specific character, but rather an undead army builder. I actually own two HACKS skeletons, which were included as bonuses in some of my orders. They’re neat, and they gave me a great feel for the skeletal sculpt, but both of them are cast in hot pink plastic, so I don’t have much use for them. But this guy? Oh, hell yes! 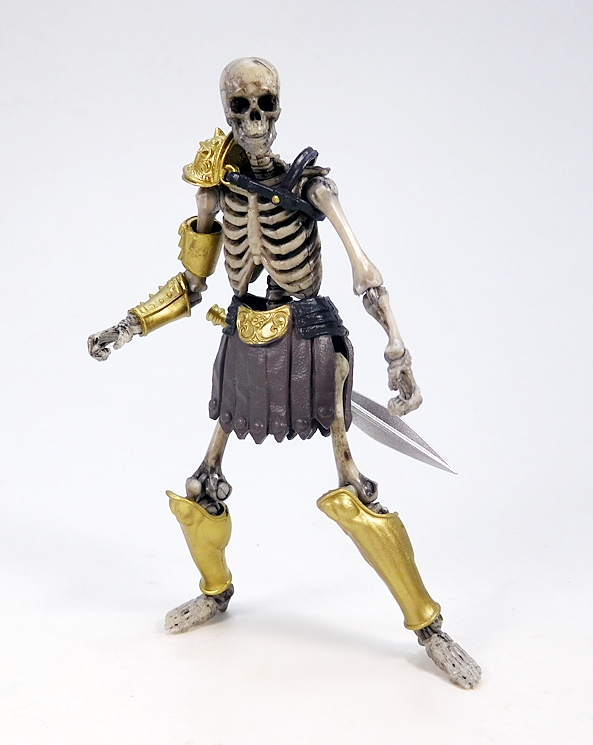 The skeleton comes out of the package with remnant pieces of Greek armor, presumably from when he was alive. His ensemble includes a pair of gold grieves on his lower legs, gold armor pieces on his right forearm and bicep, and a gold shoulder piece on his right shoulder, held on by sculpted straps. He’s also wearing a hoplite-style skirt to protect his vacant skeletal modesty. The skirt has an ornamental gold buckle on the front and painted lacings on the back.  I’m pretty sure we’ve seen all of these pieces before on other figures, but then it’s the mix-and-match nature of HACKS that makes it such a versatile line. All of these pieces are beautifully detailed and painted, but the shoulder armor stands out as being especially nice.

In theory, you can take all the armor off this guy if you want to have a plain skeleton for your display. I say “in theory” because I was not able to easily remove the grieves. I’m sure I could, but I didn’t want to stress anything on the figure by forcing them. Either way, the skeleton buck is excellent, especially for a figure in this scale. It has a finish that looks like authentic weathered bone and some of the highlights of articulation include rotating hinges in the shoulders, elbows, wrists, and hips, as well as double hinges in the knees, hinges in the ankles, and ball joints in the neck and middle of the torso. The lower jaw will even open a bit. Some of these joints are super thin, but I didn’t feel like normal handling and posing was ever going to present a problem. I will say that I found it difficult to pose him without his legs looking pretty wonky, but maybe skeletons aren’t too stable when they stand.

The skull looks really fantastic. There are some great cracks and fissures sculpted into it and I really dig the weathering. The sculpting on the teeth is rather soft, and it’s hard to make them out from certain angles, but let’s remember that this is a 4-inch scale figure.

The figure comes with a helmet, but I think it’s a shame to cover up that wonderful skull, so I doubt I’ll be displaying him with it, unless I get some more and I want to vary them up a bit. It’s gold with a black comb on top, and again it’s an accessory that we’ve already seen several times in this line, but that doesn’t make it any less welcome. This one may wind up getting loaned out to one of my other figures.

Of course, every Skeleton Warrior needs his weapons, and this fellow comes with some cool ones. Like his armor, we’ve seen all of these weapons before, as they have been released with previous figures. First off, he has a short sword which he can carry through a strap on the back of his skirt. It has a leaf-shaped blade that’s painted silver, and a simple hilt painted gold. He can hold it perfectly in either of his boney hands.

Next up, he comes with a spear. It has a leaf shaped blade at one end, and a sharp, spiked cap at the other. The shaft is gold and the blade and cap are painted silver. 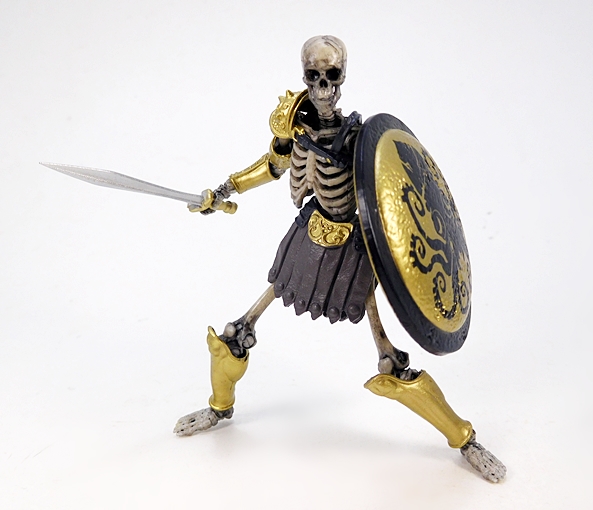 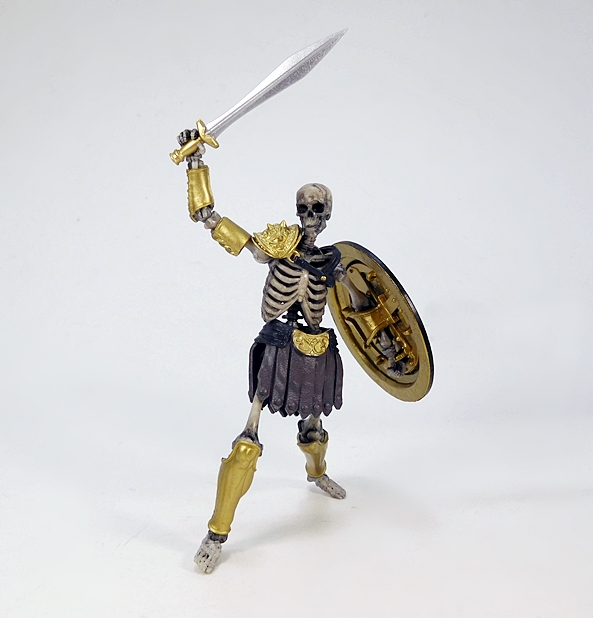 And finally, he has his shield. This is the same large round shield we’ve seen plenty of times before in the line. Here it’s gold with a black Kraken painted on the front and a black border running around the edge. The interior features a grab bar and a soft plastic sleeve, both of which allow him to hold it quite securely, and the front has a hammered metal finish sculpted into it.

The Skeleton comes with the same Boss Fight Studios stand that we’ve seen with each and every figure. He does not have peg holes in his feet, but they included these translucent pieces that will peg to the stand and you can slip his feet through them. 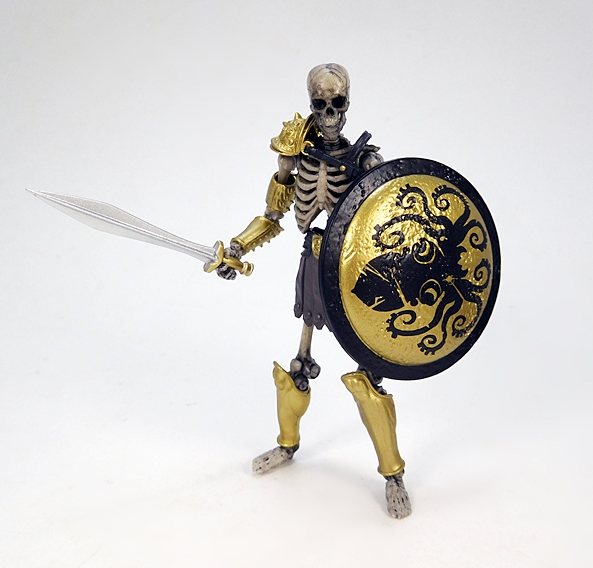 I really dig this figure a lot. Yeah, his legs are tough to work with and it’s hard to get them to not look a bit awkward when he’s standing on his own, but I can live with that. The skeleton body itself is practically worth the price of admission, but when you toss in all the cool weapons and gear, he really is an amazing little figure. This fellow was issued in one of the later waves of Series 1 and I actually missed out on his release completely. Luckily I was able to track one down at Kokomo Toys. I hope the folks at Boss Fight turn out something similar for their Series 2 line, because I’ll take as many Warrior Skeletons as I can get.