After a long week of being sick, I’m ready to enjoy a leisurely morning with some coffee and a brand new KanColle Super Premium figure from the wonderful folks at SEGA. These SPM figures are presented in a roughly 8-inch scale and they’ve been digging pretty deep on the character selection, which keeps me coming back for more. Today’s Fleet Girl is the Light Cruiser Oyodo in her refit “Kai” form. 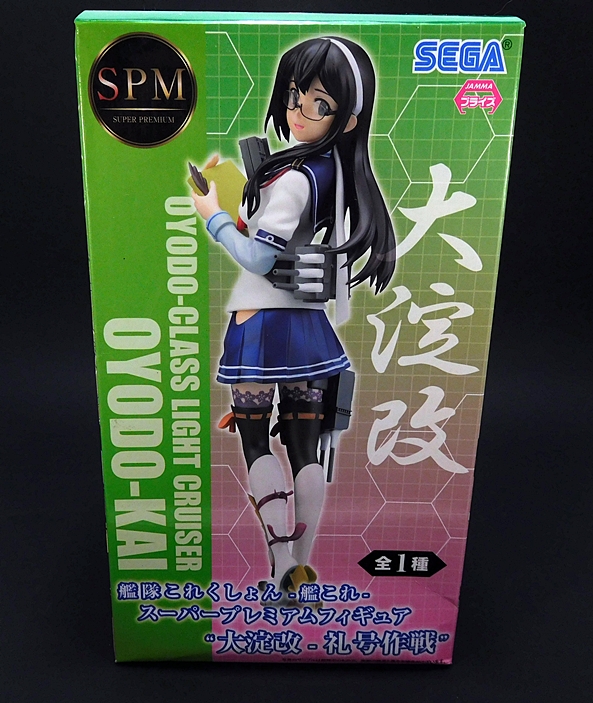 As always, SEGA’s SPM Fleet Girls come in standard enclosed boxes with a shot of the figure on the front, character art on the side panels, and lots of Japanese copy on the back. There’s very little English here, so hopefully you know what you’re getting. These boxes usually arrive pretty badly beaten up, but Oyodo’s is actually in pretty nice shape. Inside, the figure comes between two clear plastic trays. The only assembly required involves plugging her into her base. 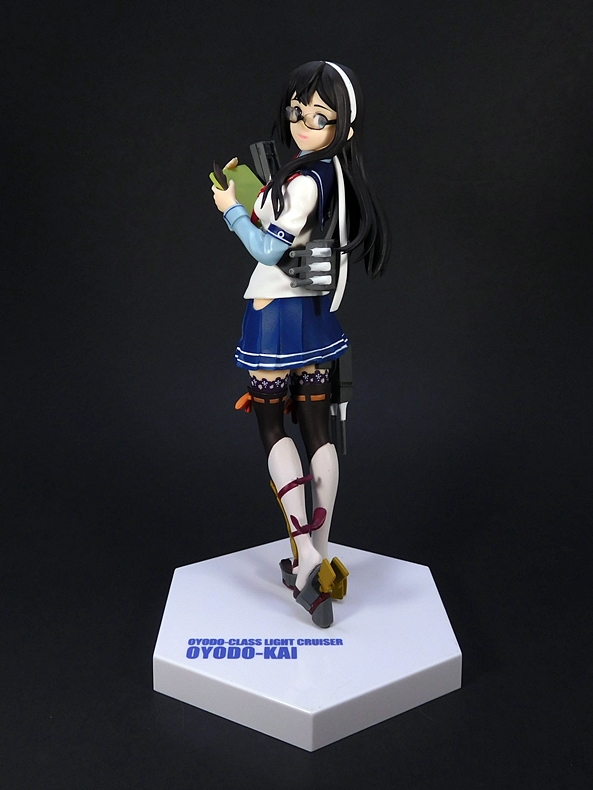 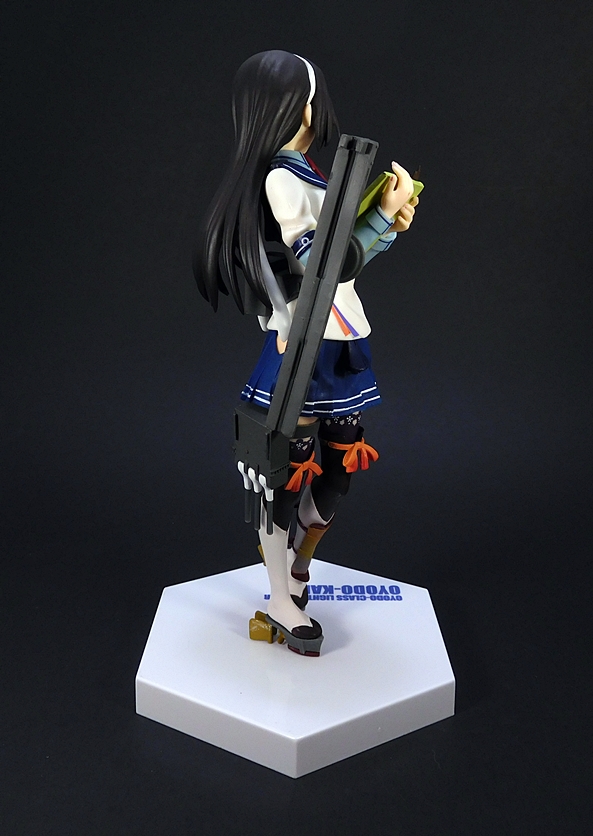 While Oyodo-Kai is a fully armed Light Cruiser, she’s known more as an administrative “Mission Girl,” and only really sees action if you happen to be playing as her in the game. Likewise, she never saw action in the anime either, but rather served as assistant to Battleship Nagato and relayed action orders to the Fleet Girls. Even in the final battle when Nagato and Mutsu hit the water for action, Oyodo was nowhere to be seen. Her administrative nature is nicely reflected in the figure, which stands with clipboard in hand and turning in mid walk, as if to receive some last mission detail before hurrying off to relay orders. 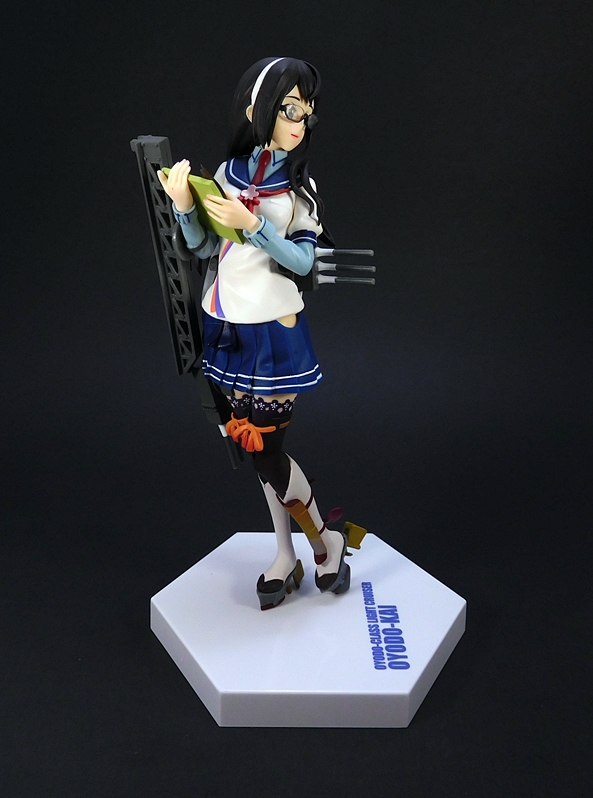 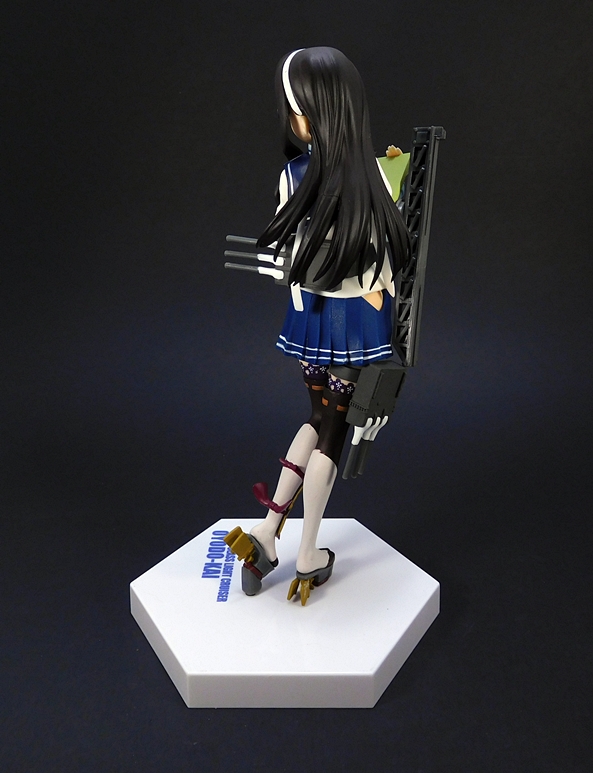 Her outfit is rather unique among the Fleet Girls, and while she retains the familiar sailor-type uniform, she wears the top over an office-style long-sleeved button-down blouse with a red necktie. While she looks like all-business from the skirt up, she’s got a bit more whimsy going on down below decks. She’s wearing a pair of thigh-high stockings with lace around the tops and tied with pink ribbons just below. Over those she has white boots with gray, red, and gold rudder boots. Finally, she has a single piece of armor on her lower left leg, tied with two red ribbons. 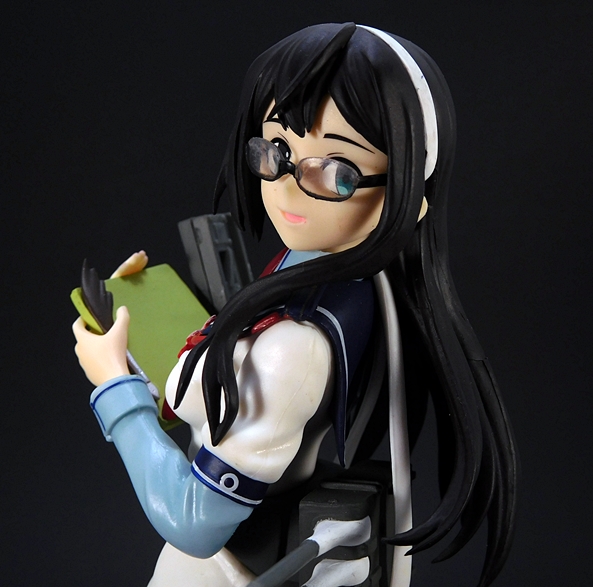 The portrait here is pretty nice, but maybe not one of their best. I think maybe if the mouth was closed it would match the character art a little more closely. I do, however, like how they did her glasses, and they definitely add to her official administrative look. One thing that’s noteworthy is the white head band, which is correct for this refit “Kai” version. On the other hand, I’m pretty sure that as Oyodo-Kai, this version should have flower patches on her lapels, but they seem to have been omitted. 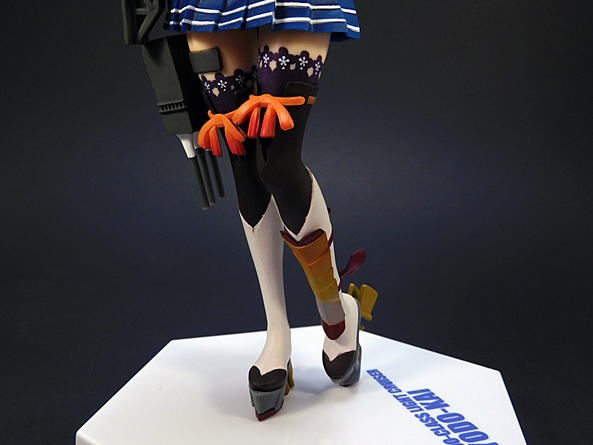 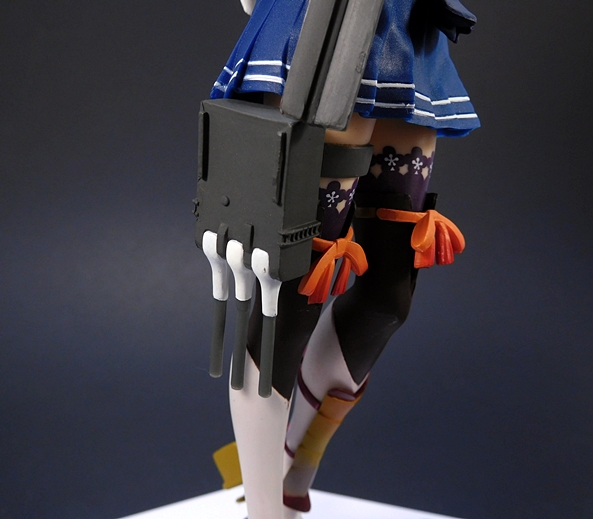 Oyodo-Kai may be a Mission Girl, but she still retains her armaments. In this case, that includes her twin 15.5cm gun mounts, one of which she wears across her back and the other on her right thigh. She also wears her catapult on her right arm, used for launching her Type 0 reconnaissance seaplane. Her full gear would also include a considerably large hull part on her backpack and extra guns, which SEGA wisely omitted from this figure, probably because it would have been too big and ungainly and I’m fine with that. 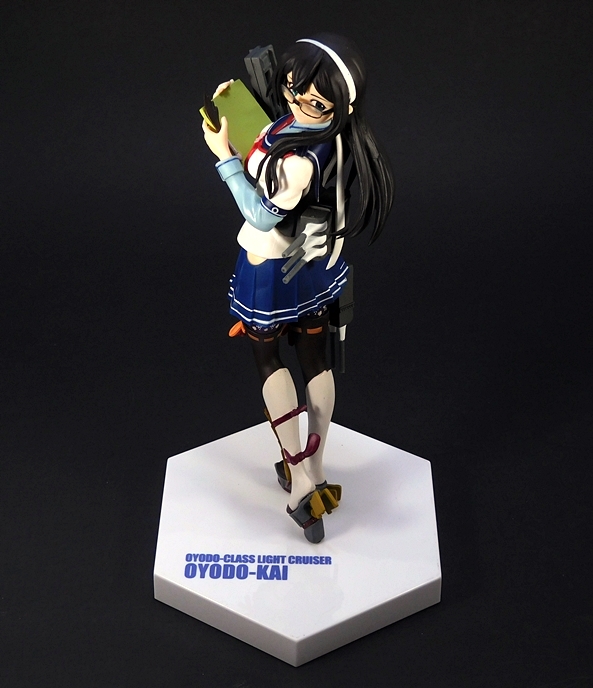 Oyodo-Kai comes with a white hexagonal base, which is similar to several of SEGA’s previous SPM releases. Her name is also printed in blue near the front and off-center. These are more or less standard designs for the SPM figures, although they do change them up from time to time. 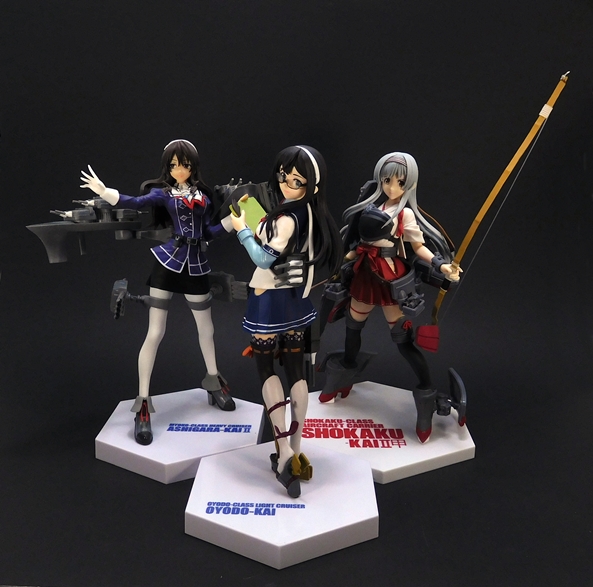 And here’s a shot of Oyodo-Kai with Heavy Cruiser Ashigara Kai II and Aircraft Carrier Shokaku Kai II. No matter what ships I assemble in the fleet, these gals always display beautifully together. 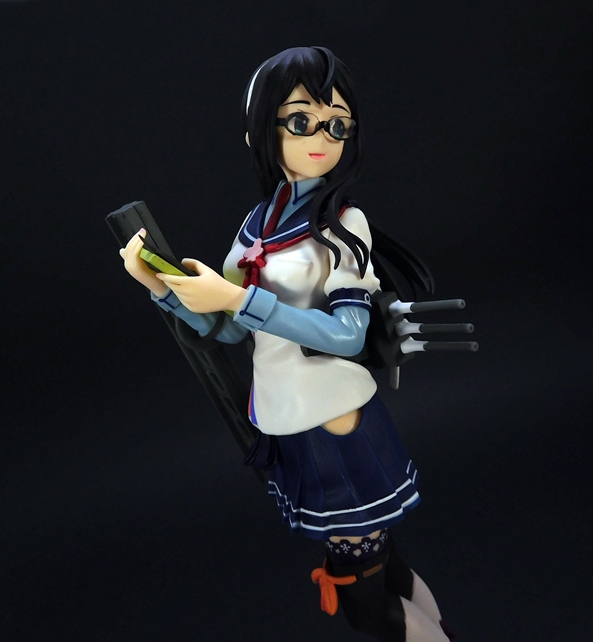 As a characeter, Oyodo was not terribly high on my list, but as I fill out most of Kantai Collection’s heavier hitters, I’m having fun picking up some of the back-benchers as well. Besides, Oyodo really brings a lot of charm to my collection with her rather distinctive outfit. And it doesn’t hurt that both the sculpt and paintwork on this figure are excellent. I snatched her up off of Amazon for $18 shipped and I’d say as far as missions go, that was a success!