Did you pop in here yesterday and wonder where I was? Are you wondering why I’m here posting on a Wednesday? Well, in case you missed the Easter memo, my weekday updates for April are happening on Monday, Wednesday, and Friday, with the occasional Anime Saturday post when I have the time. Today, I’m dedicating myself to getting caught up on my Vitruvian HACKS reviews before the mother lode from that other Kickstarter, Mythic Legions hits later in the Summer and buries me in figures. I’ve got a good mix of the newer Series 2 figures as well as the many Series 1 figures I’ve yet to review. This time, I’m having a look at Cerisier, a Series 2 release that was exclusive to Boss Fight Studio’s webstore last year.

Most of the Series 1 HACKS Exclusives that I looked at last year were released in partnership with Kokomo Toys and those shipped in illustrated cardboard boxes. But this BFS webstore exclusive comes in the regular carded packaging with a landscape-orientated card and bubble. The packaging is totally collector friendly and features some nice character artwork on the front of the card and a “Collect Them All” style layout on the back as well as a pretty cool little bio that tells us Cerisier is one of the Queen’s Elite Corps of archers, who bathe daily in dark ink, can see in the dark, and have their voices magically removed. Badass! There is no explicit call-out on the package that Cerisier was a webstore exclusive, but the figure is also not pictured on the back with the regular releases.

From the neck down, both the body and costume of this figure is a straight repaint of Aiyana, the Autumn Elven Archer. That’s not a bad thing, because both are excellent sculpts and the re-coloring goes a long way to make this figure feel unique. The gray skin tone gives her a sinister and shadowy visage and the autumn colors of Aiyana’s costume have been replaced with some brown, pink and white. Yeah, the color pink doesn’t really scream shadow assassin to me, but I still dig it. The detail in the costume sculpt is still quite amazing when you consider it’s done in the 4-inch scale, and little details like the sculpted leaves that make up her skirt and the thin painted cord that’s meant to secure her leg wraps go a long way to make this figure look extra special. 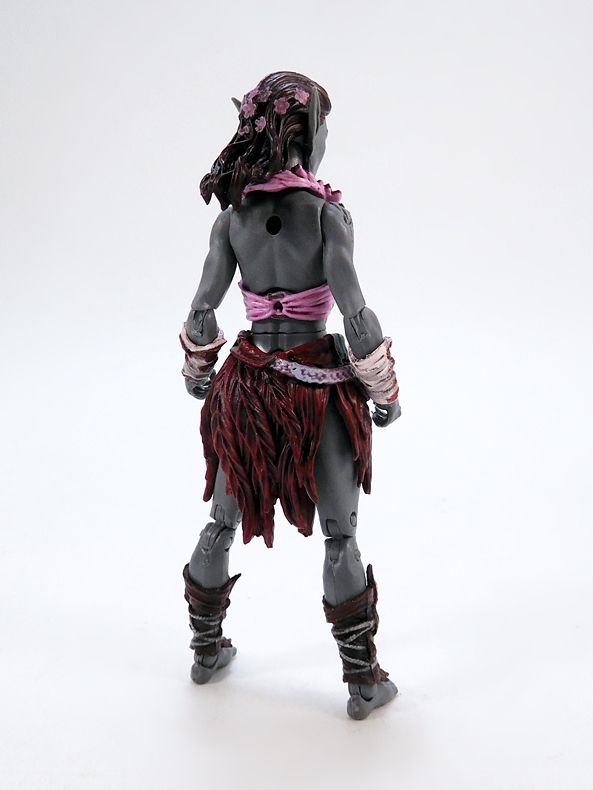 As always with these figures, Cerisier’s costume is all comprised of separately sculpted pieces and is completely removable, which links in with the customization aspect of this line. The standard female HACKS buck features some solid articulation too. The arms have rotating hinges in the shoulders, elbows, and wrists. The legs are ball jointed at the hips, have double hinges in the knees, and the ankles have both hinges and rockers. There’s a swivel in the waist, a ball joint under the chest, and the neck is ball jointed. 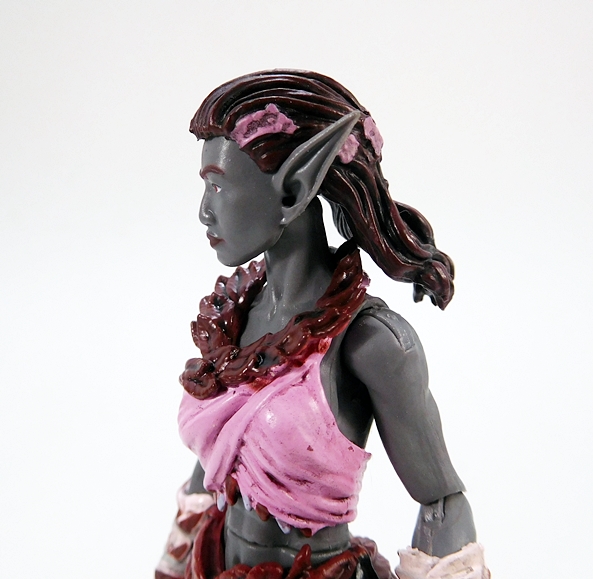 The head sculpt is new and I really like this one a lot. It’s more angular than Aiyana’s and I’d dare say prettier as well. I really dig how pronounced the pointed ears are here, and just the fact that there are variations in the ears among the HACKS elves. The hair is sculpted as a separate piece and pulled back tight, which would seem practical for an assassin. She also has some flowers sculpted into her hair, which are painted pink to match her top. What? Assassins can like pink! We’ve already established that! 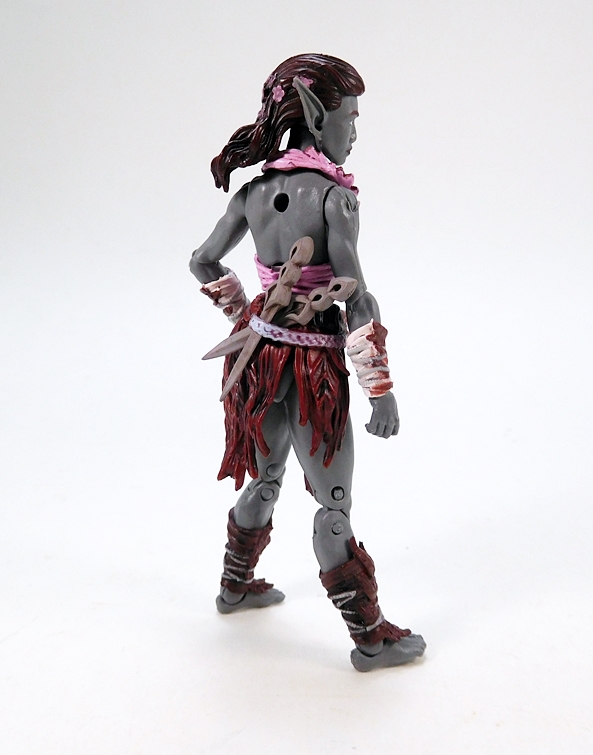 Most of Cerisier’s accessories are new, but she does come with repaints of the same two daggers we saw with Aiyana. She can wield them in both hands, and there’s also a slot on the back of her skirt where she can store them. 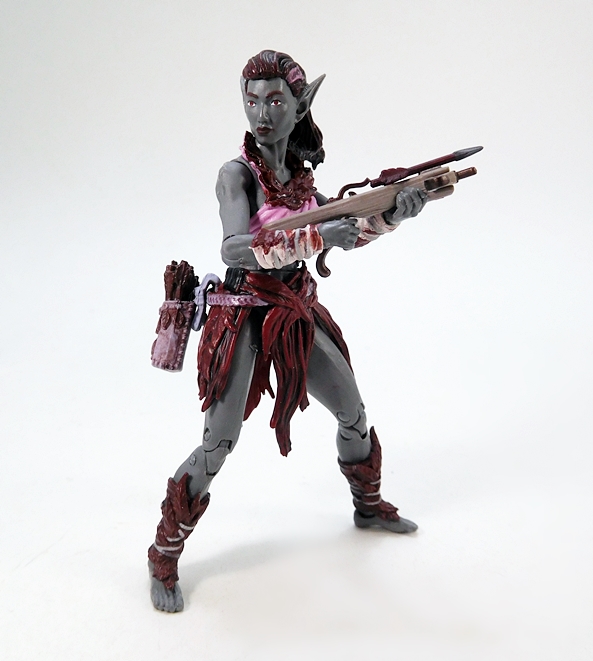 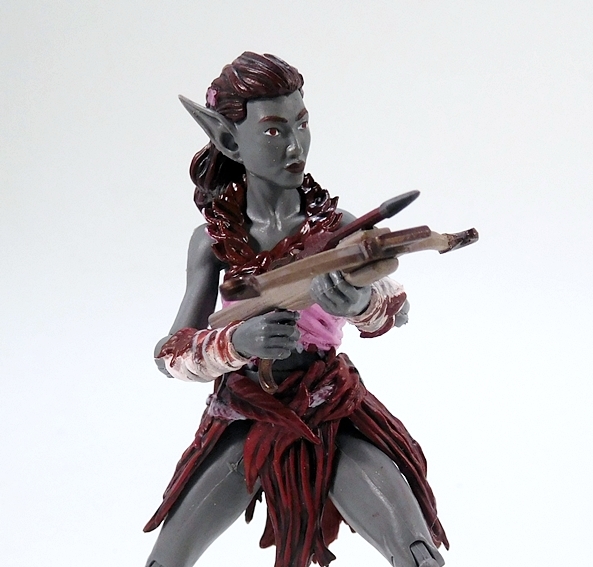 Cerisier’s main weapon is her crossbow, which is a classic medieval style weapon with a lever-like trigger in the handle and a stirrup mounted on the front of the bow. There are three loose bolts included, which can be loaded into the weapon, but there isn’t a lot to hold them in there very securely. Still, I was able to get them to stay put for a number of different poses without any trouble. 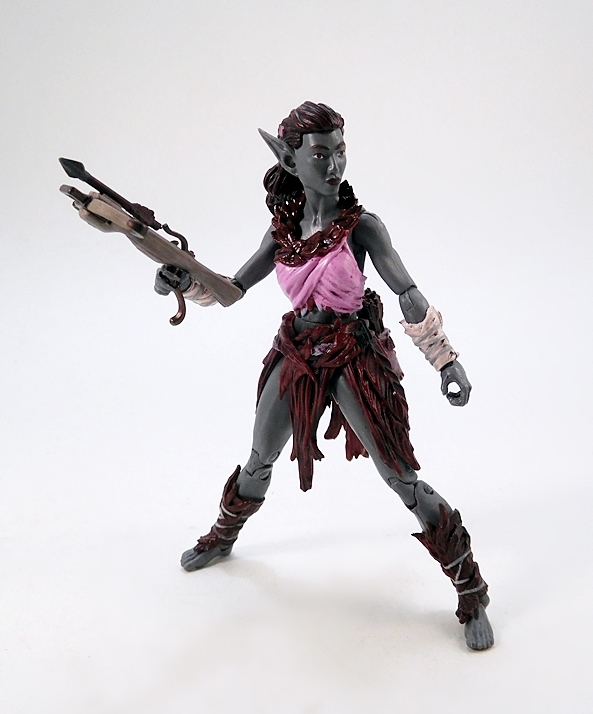 She also comes with a quiver to hold her extra bolts. This quiver is sculpted with a hook that can hang off the slot at the back of her skirt, provided you aren’t using that slot to hold her daggers. Nope, Cerisier can’t carry all her weapons at once. 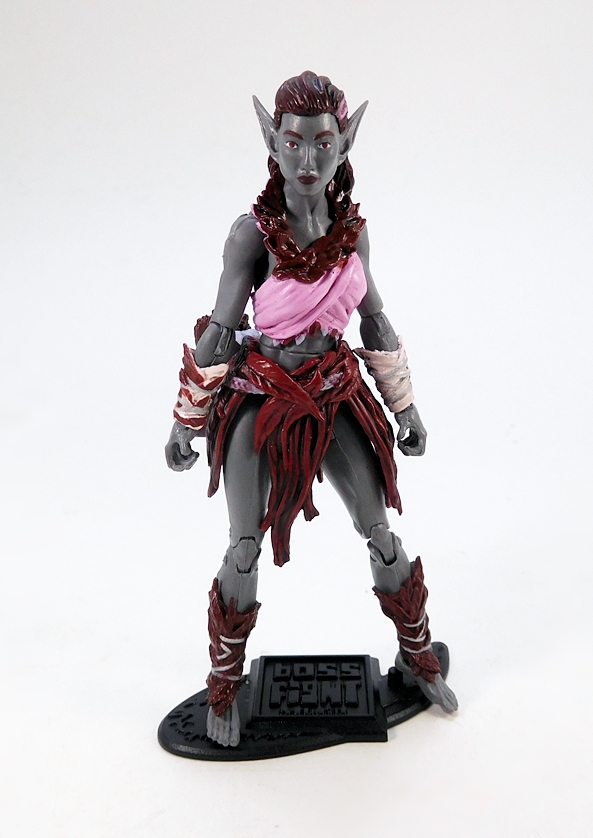 And, as always, the figure comes with a standard black Boss Fight Studio figure stand. The pegs on these stands don’t work all that well with the barefoot characters, because the foot pegs aren’t that deep, but I was able to make it sort of work. You don’t really need the stand, though, because Cerisier stands quite well on her own. I’ll also point out that she comes with an extra pair of hands with the axis of the wrist hinges changed, so one pair bends side to side and the other forward and backward. These are also pretty standard on all of the HACKS figures. 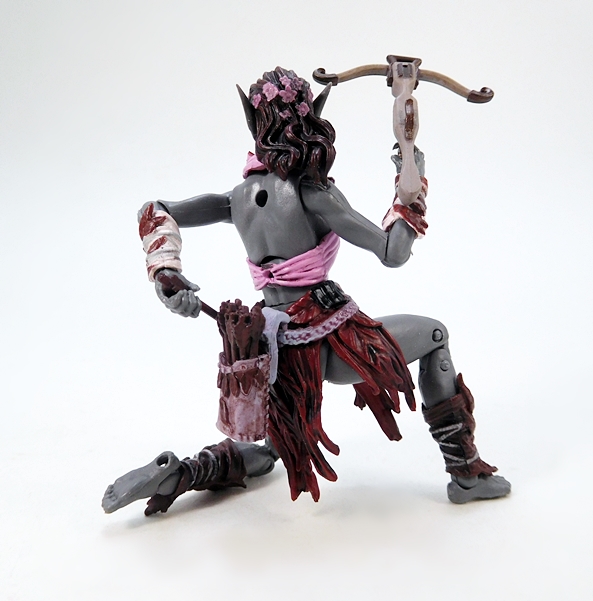 Cerisier is another solid figure in the HACKS Series 2 foray into the fantasy world. I’m a big fan of the elves, and I plan on picking up all of them, but then I’ve pretty much been all in on this line anyway. I think Cerisier also makes for a perfect exclusive, since she does reuse a a lot from one of the existing regular releases. If you weren’t able to track her down, but you have Aiyana you then aren’t completely missing out, but I’d still recommend her for a pick up if you’re collecting the line. At the time I’m writing this, she’s even still available through the Boss Fight Webstore. At about $25, the price of the Series 2 figures has gone up a bit, but that may have to do with the fact that the first series was Kickstarted and these are being sold through pre-orders. Either way, I think these figures are still well worth it and it’s a line that I’m enjoying a lot.