Advent of Decay is the next big set of releases for T4H’s wildly popular Mythic Legions series. I have about 35 figures coming to me from that Kickstarter and that’s not even everything. Unfortunately, it’s been delayed a bit and is now expected to arrive sometime in the mid to late Summer. In the meantime, T4H did a much smaller interim assortment called The Coliseum, which consisted of seven figures and one new Deluxe Troll. I was a little strapped for cash when these pre-orders dropped, so I didn’t go too deep here, but I did pick up two figures and the Troll. I may try to pick up a few more when the remaining stock goes up for sale, but those items usually go fast. Anyway, today I’m opening up what I suspect might be my favorite of the bunch, Raygorr!

T4H has yet to shake up the package design since the first figures shipped, and that’s fine by me. Raygorr comes on a generic Mythic Legions card with a large bubble, which can be opened without damaging anything. There’s an insert at the bottom of the bubble with the series logo and a little bio blurb on the side. The blurb on the insert tells us a little about Raygorr. Nicknamed “The Dragon,” Raygorr came to The Coliseum from a distant land and with a unique fighting style. Other contenders in the Coliseum are slaves made to fight for their lives, while Raygorr apparently goes for sport or some secret nefarious purpose. He’s just your everyday mysterious badass. 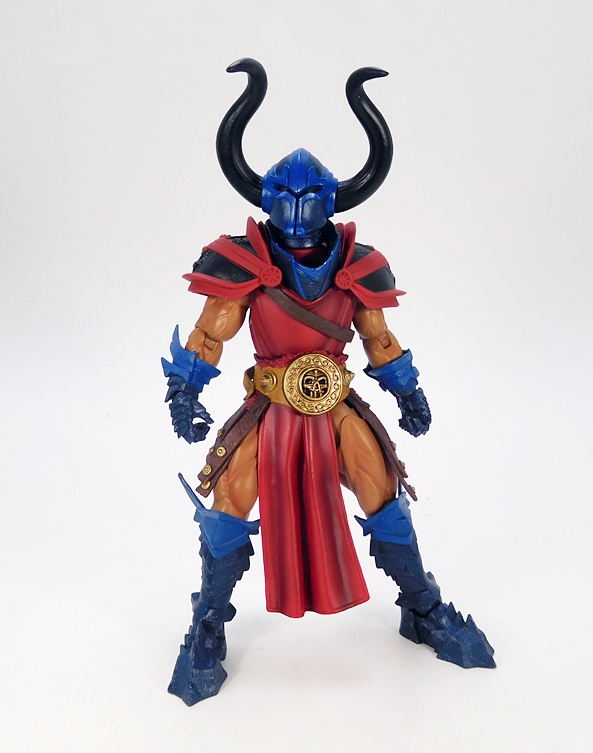 And oh boy, does he look the part! As you probably know by now, Mythic Legions uses a clever system of interchangeable parts, which allows T4H to mix and match to make new figures. In this case, Raygorr uses the torso and tabard from Sir Gideon, the belt, and bare arms and legs from Vitus, the boots and gloves of the Orcs, and the helmet and shoulders from Gorgo Aetherblade. It’s an eclectic mix that works beautifully and continues to prove that T4H still have some great looking combinations up their sleeves. 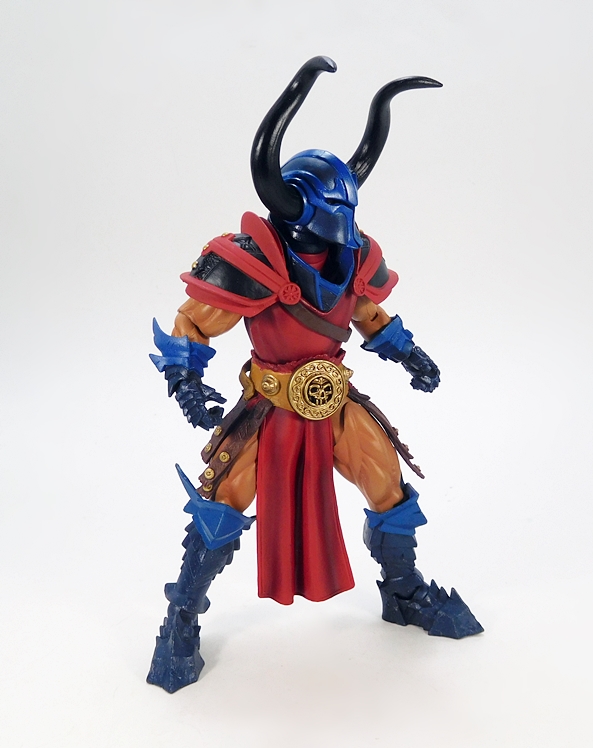 Naturally, everything has also received a fresh coat of paint, and I really dig the color combinations here. The tabard is crimson and matches the trim on his shoulders. The boots, gloves, neck guard, and helmet are all a striking deep metallic blue with some lighter blue to give it a little more variety. The belt is a mix of tan and brown with some lovely gold paint on the giant belt buckle and on the fixtures. Finally, the skin is cast in a tanned flesh color. The paint T4H uses on this line has always had a premium look to it, and that trend continues here. 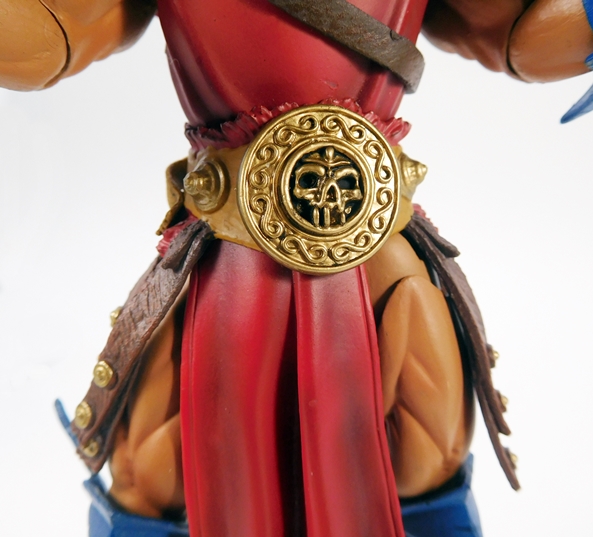 Also evident here are all the extra little touches in the sculpt that I really appreciate. The armored boots and gloves have pitting and nicks from battle. The belt is textured to look like real leather with some frayed and worn edges, and the sculpting evident in that belt buckle is a work of art all on its own. 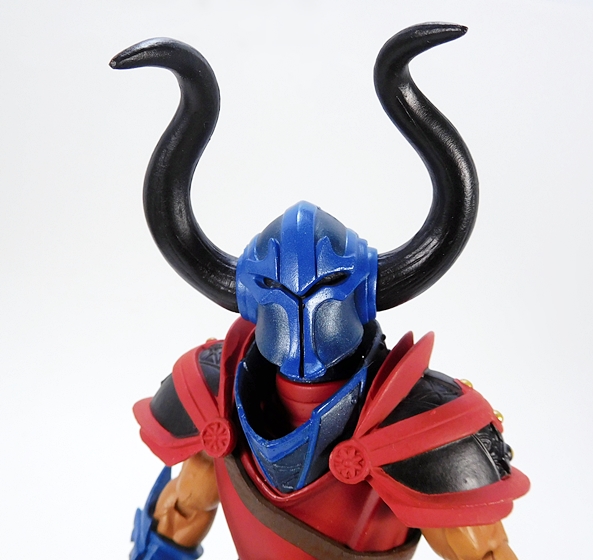 You have two display options for Raygorr’s helmet. He comes out of the package with these giant black horns, and I think they look great. And since they’re socketed into the helmet, you can even change the angles. 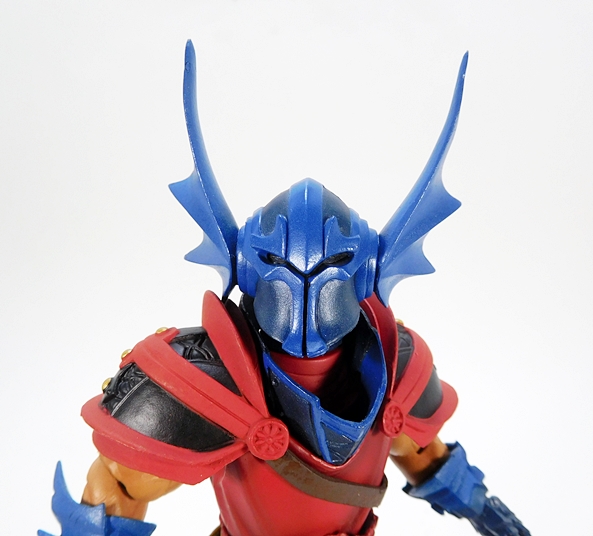 The other option are these bitchin’ wings, and these are what I’m going to go with most of the time. There’s something about this look that just sings to me. I think it makes him look like both royalty and a mighty warrior. Almost like some kind of Duke of War. Hmm… Anyway, the two tone blue coloring on the helmet really looks fantastic. Personally, I would have given him a couple of red eyes peering out from the black void of an eye slit, but either way, this head sculpt just looks grand. 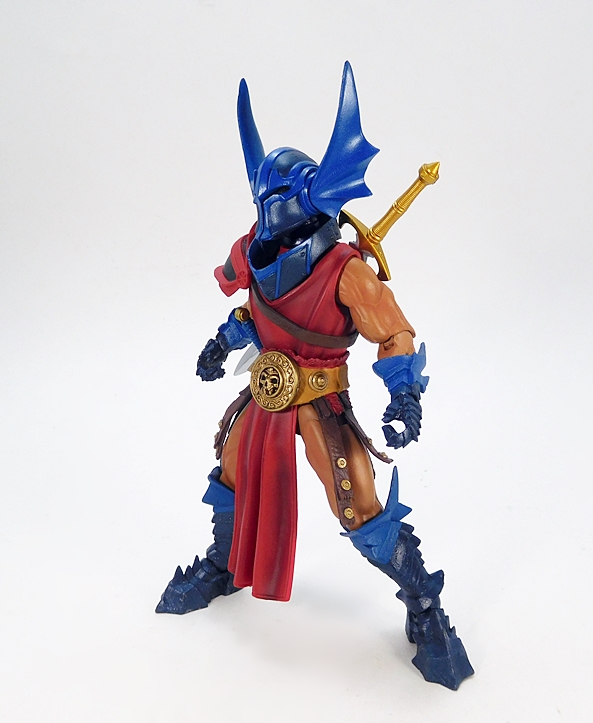 Raygorr does show up a little light on the accessories, but what he does have is plenty good. For starters, he comes with not one, but two of the ubiquitous Mythic Legions brown sword belts. One comes on the figure, worn as a shoulder strap and I’ve opted not to use the other, because I don’t want to cover up that beautiful belt he has. His sword is the same sculpt that I first saw bundled with Gorgo Aetherblade. It’s a classical fantasy design with gold hilt and grip and a stout silver blade. If you opt to give him the brown waist-belt, he can carry it there. You can also remove one of his shoulders and have him wear it across his back. It looks pretty good slung back there, but I prefer he keep both his shoulders.

Next he comes with one of the cool little no-nonsense daggers. This one has a gold guard and pommel and the grip is painted blue to match his boots and gauntlets. There’s a loop on his main belt that he can tuck his dagger into. The loop is a little too snug to work that well with the sword, but you could probably make it fit if you really wanted to. 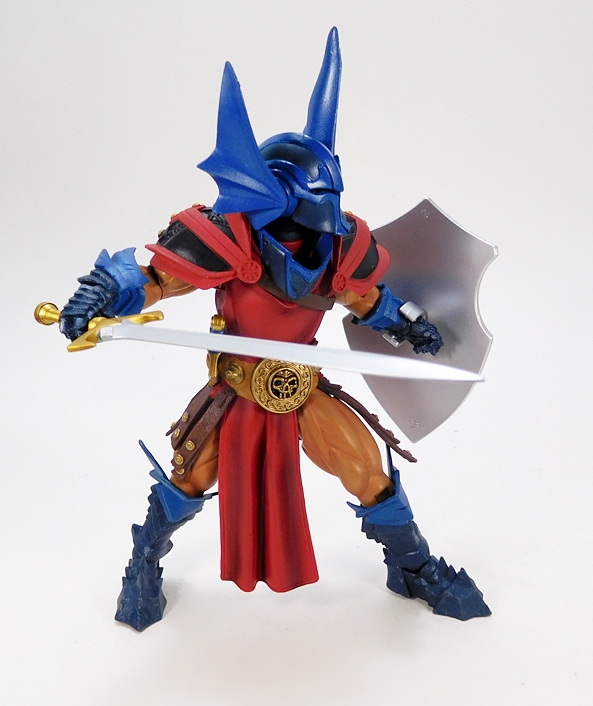 Finally, Raygorr comes with the typical Mythic Legions shield. The shield includes a pegged wrist clip, so you can angle the shield however you want and independent of the position of the arm. The border is painted silver with a red front surface and a black dragon emblem to advertise Raygorr’s nickname. The accessories here are all great, but it’s worth pointing out that these figures typically come with one more big weapon, like a spear, battle axe, or extra sword. But I’ve got a lot of extra weapons from this line if I really wanted to give him something else, so I’m not complaining.

The way The Coliseum was presented made it feel like a thrown-together ad hoc line of filler to bridge the gap between the two Kickstarters, but you wouldn’t know it by looking at this guy. I’ve now opened and reviewed over 25 Mythic Legions figures and this line continues to impress me. And despite being entirely constructed of parts pillaged from previous figures, Raygorr still feels like he was designed from the ground up. That’s the genius of T4H and their eye for design. I’m not going to say that Raygorr is among my favorite Mythic Legions figures, because I say that almost every time I open a new one, but… Oh, OK. He’s one of my favorites.