As promised, I’m back tonight to wrap up the somewhat Black Panther themed wave of Marvel Legends with the Okoye Build-A-Figure. Technically, I could have reviewed this figure last week, since the Iron Man I opened this morning did not include any BAF parts, but since this is the last Legends Wave that I’ll be reviewing consecutively, I decided not to mess with tradition.

And here she is all laid out and ready for assembly. The figure consists of the torso, the limbs, the head, and two weapons. This is one of those BAF’s that could have easily been a packaged figure, because she’s so small. I always see a number of fans come out of the woodwork and complain when Hasbro does this. I get it, I still think this wave should have been all from the movie, but if they released Okoye as a packaged figure, I’m not sure what they could have done for the BAF. Maybe the Wakandan throne? Anyway, let’s get Okoye together and check her out.

The first thing that impresses me here is how little of this figure is recycled from Nakia. Without close inspection, I was assuming there would be a lot of shared parts, and while it definitely looks like some of the parts here are likely re-sculpted, there’s enough new sculpting to make it look like a new figure. The upper legs appear to be directly shared, which goes back to how odd I thought they were on the Nakia figure. At least here they’re painted black and not in her skin tone, so the decorative patterns look like part of her leggings and not like they’re carved into her skin. I also like the streamlined look of Okoye’s boots, making her legs look a lot more sleek and graceful. Those clunkly accordian-style tops on Nakia’s boots didn’t do her any favors.

Like Nakia, Okoye uses a soft plastic sculpted belt with the lower half of her coat and it’s pretty convincing in making it all look like one piece. I like that the back of this piece is detailed to look like several layers overlapping, and it’s designed so as not to hinder the leg articulation too badly. The plastic garment features all sorts of ornamental detail etched into it along with a little gold wash to help it stand out. Okoye’s segmented bracers looked to be borrowed from Nakia at first, but these have pieces that extend up to her elbows, so there was definitely some tweaking done here. These are left in a bare gold plastic, which looks OK, but not nearly as good as the gold plastic used for her shoulder armor. It’s a shame they couldn’t spare some of that paint for these.

Hasbro has been killing it with all the MCU Black Panther head sculpts and Okoye here is no exception. This portrait is a tiny work of art. The smooth contours of her face are so beautifully done, the paint is wonderful, and the tattoos on her head look amazing. It’s so hard to believe this is the same company producing those noggins used in the 6-inch Star Wars Black Series.

The articulation is identical to what we saw with Nakia. The arms have rotating hinges in the shoulders, elbows, and wrists, and yes, I’d still rather see Hasbro go to double hinged elbows and bicep swivels for the ladies. The legs feature ball joints in the hips, double hinges in the knees, swivels in the thighs, and both swivels and rockers in the ankles. She has a ball joint under her chest, and both a hinge and ball joint in the neck.

Okoye comes with two weapons: A long spear and a spear head with a very short shaft. The long spear has a textured staff with a spearhead that’s split in the middle giving it a rather distinctive look. Both her hands are designed for gripping, so she can comfortably wield this weapon in either or both of her hands. 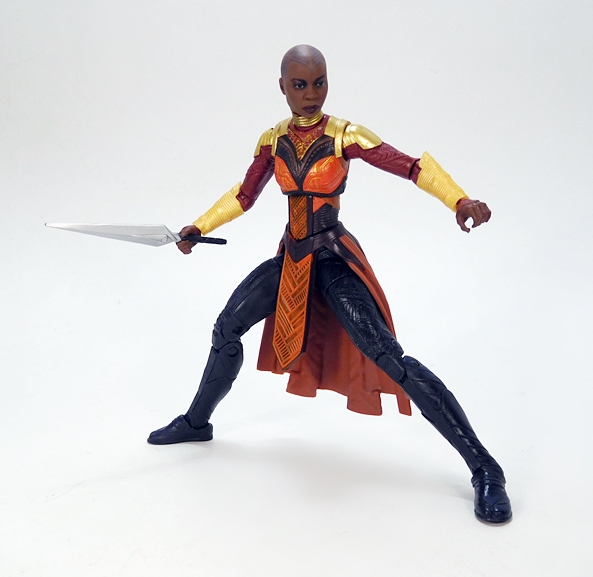 I don’t recall the smaller spear-type weapon from the movie. I’m not sure if this is supposed to be a unique weapon or a broken piece of s spear. The shaft here is a little too slight to allow her to get a firm grasp on it, so it tends to wobble loose in her hand a bit, but I was still able to get her to hold it fairly well.

I have to hand it to Hasbro, the MCU Black Panther figures have been some of their best work to date. Scoff if you will at the fact that Okoye didn’t need to be a BAF, but I don’t care. I’m not privy to the business decisions that made Hasbro go this route, but so long as we got her, I’m cool. I will, however, keep harping on the fact that the comic-based figures in this wave should have gone elsewhere in favor of Shuri, Klaue, and Everett Ross. Yeah, we’re getting Ross in a two-pack, but what about the other two? I don’t see a big opportunity down the road to release any of these figures, unless they roll them into future releases of the 10-Year MCU Anniversary figures. Unfortunately, we don’t know whether that will be an ongoing thing or not.

On the next Marvel Monday, I’ll start randomizing my Marvel Legends reviews as I continue to hack my way through the pile of backlogged figures in the corner, and there is a lot of them, so what figure will be turning up next week? Your guess is as good as mine!