I’m slowly getting caught up on my NECA reviews, and that’s a good thing because I have a bunch more figures coming in the next week or so that will start filling up the hopper again. Today I’m checking out Scarface from the game Concrete Jungle. I originally played it on the PlayStation 2, but a little while ago I picked up a copy for the Xbox, since my OG Xbox is now rigged for HD. Alas, my poor old girl died on me shortly afterwards and I’ve only recently been able to do the surgery required to get her running again. If I’m being honest, Concrete Jungle is a decent game, but not a great one, although I’ll confess that I’ve enjoyed playing it a lot more than I enjoyed watching any of the films that followed after Predator 2.

I don’t know if NECA classifies this figure as one of their Ultimate releases, but the packaging suggests that it is. You get an extra thick window box with a folding front flap, and there are a lot of goodies inside. The box has plenty of pictures of the figure and accessories and, unlike NECA’s regular Predators, this packaging is totally collector friendly. Let the gushing begin! 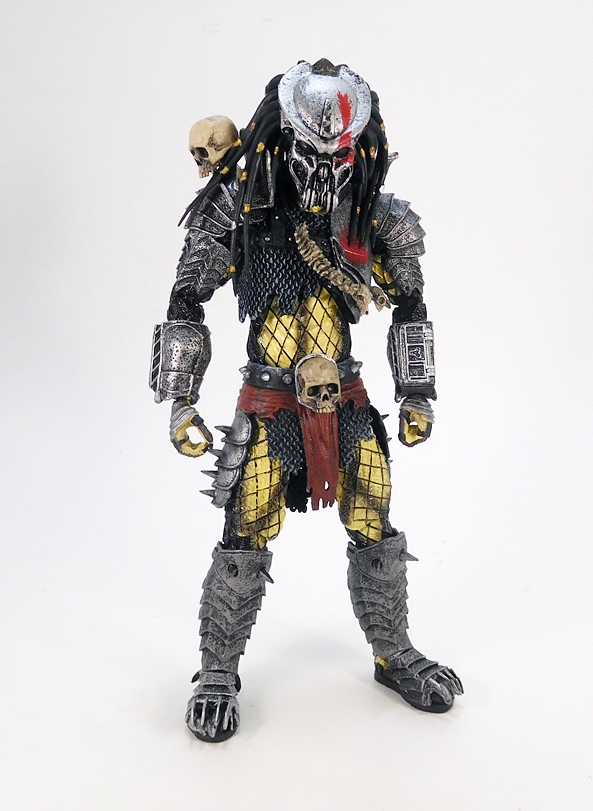 Getting Scarface out of the box, I’m immediately greeted by a sense of awe that I rarely encounter with figures in this price range. Seriously! He’s big, he’s beefy, and he’s absolutely gorgeous. Sure, NECA knows their way around a Predator better than anyone other than Stan Winston. They’ve been sculpting these deadly interstellar hunters for ages now and they bring with it a passion that can be seen in the craftsmanship. Scarface features the same familiar body type as previous releases, with the creepy yellow-and-black skin and all kitted out with a sculpted body net. The outfit, on the other hand, is new and distinctive among previous Predator releases, and almost has a medieval flavor to it. For starters, you get some ragged chain-mail protecting the upper part of his torso and his groin. Segmented plate armor covers his shoulders, arms, hips, and lower legs. All of the plate armor is sculpted with pitting and wear, making it look like this dude has seen some major action in his day and the paint is totally convincing as weathered metal.

Some nice extra touches to the outfit include two human skulls, one mounted on his right shoulder and the other used as a belt-buckle. Both are missing their lower jaws and feature a realistic bone finish with a wash to bring out all the details. Additionally, he has a traditional bone sash hanging off his right shoulder and crossing his chest. Scarface also likes his spikes, as his armor is literally studded with them. He’s got some real sharp ones on his right shoulder, hip plates, and knee guards, and some more blunt and knobby ones running around his belt. He ties the outfit together with a ragged brown sash that obscures some of the chain-mail protecting his unmentionables. 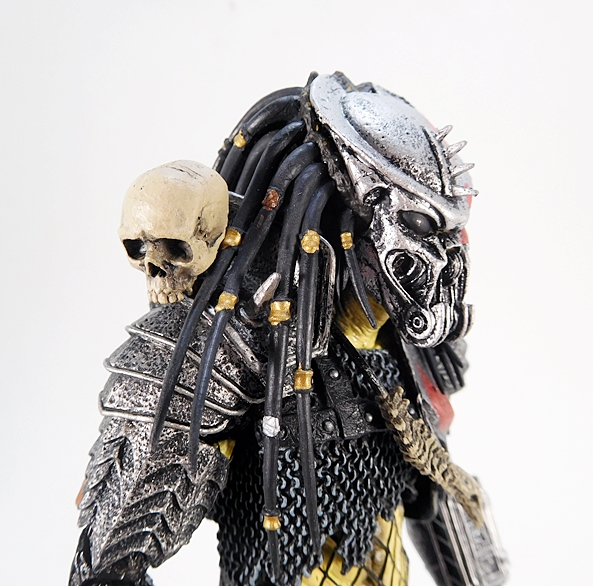 As is often the case with NECA’s Predators, Scarface comes with both a masked and unmasked head, and both of these are works of art. The mask is a lot more intricate than what we saw on the City and Jungle Hunters. The configuration of the forehead is similar, but Scarface again sports some spikes on a short ridge that rises up from between his eyes. The almond-shaped eyes are black and soul-less as ever, but the biggest difference here comes in all the detail in the area that covers his mandibles, which looks damn cool and adds to the intimidation factor of the mask. The surface of the mask features the same worn and pitted look as the rest of his armor, and as always, I’m impressed by the individually sculpted dreadlocks. The final touch comes with the splash of red paint that covers the damaged side of his face. 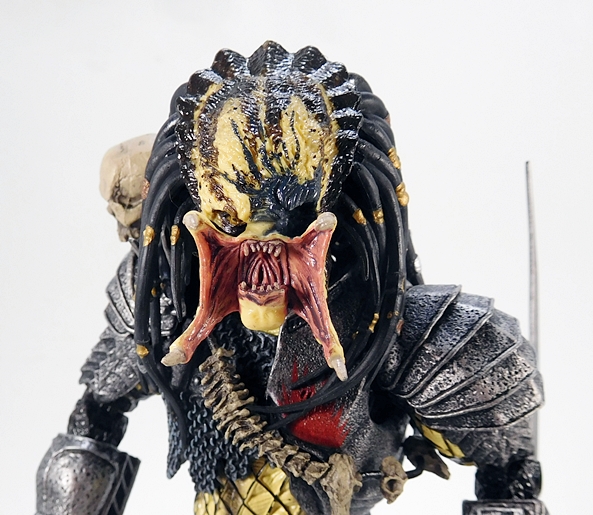 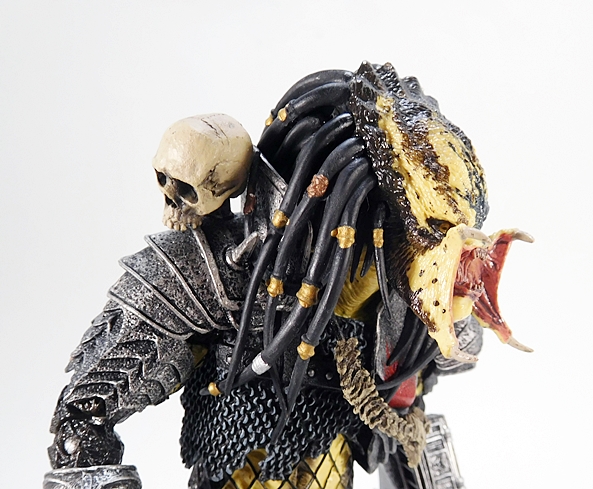 A simple pop-and-swap gets you the unmasked look, and once again I’m faced with the impossible decision of which way to display this figure. Scarface’s naked visage features his mandibles open in full, bloodcurdling scream, allowing for quite the view of his alien oral cavity. Above, you can see his yellow, beady right eye as well as the vacant socket to the left where his horrific wound was suffered, granting him his nickname. I really need to invest in one of those packs of head stands that NECA has on the market, because not displaying both of these noggins is nothing short of a crime. Let’s move on to Scarface’s various instruments of killing…

No Predator feels complete without a shoulder-mounted plasmacaster, and Scarface’s is quite a doozy. The entire assembly tabs easily into the notches on his back and the weapon itself has a track that allows it to be slid forward and hinged into a firing position. NECA did not include a firing effect part with this figure, and I can’t say as I really miss it. If you absolutely must have one, you might be able to borrow from one of the previous releases. As usual, it’s a tight fit between the weapon and the head, but I’m used to that by now.

Next up, Scarface comes with this speargun. I’m pretty sure a version of this thing was seen in Predator 2, but it was really given its due in the Predator video games. The Concrete Jungle version is a bit more compact, not quite a rifle and not quite a pistol. I really dig the design of this thing, and the right hand is sculpted to hold it quite well. 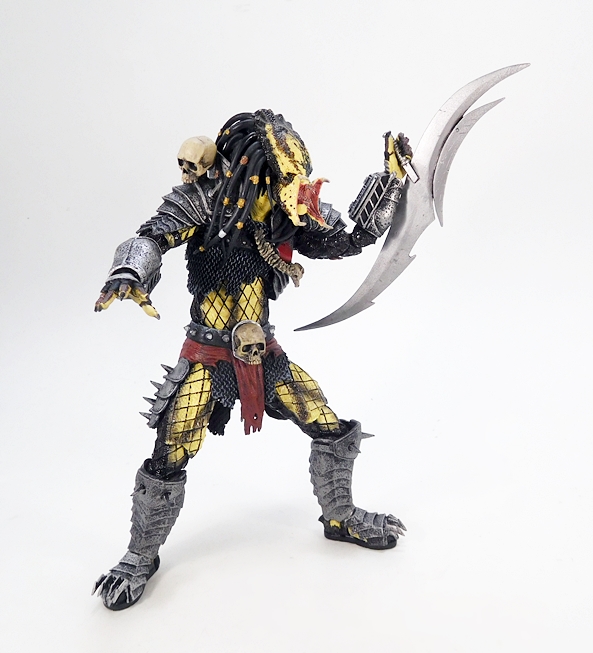 Scarface also comes with this rather distinctive curved sword to hold in his left hand. The handle works so that it is above the blade, allowing for slashing moves with the serrated edge that rests past his elbow as well as downward swipes with the hooked edge that protrudes past his wrist. The exotic shape of the blade reminds me a bit of the Klingon swords from Star Trek and that’s not a bad thing. It’s a very utilitarian looking weapon, without any real ornamentation, save for the artistic curves of the blade.

And for added slicing, dicing, and skewering, Scarface has the retractable blades on his right gauntlet that we’ve seen with most previous Predators. As usual, these don’t actually retract into the gauntlet, but rather tab into the slots when you want to display him with them deployed. There’s also an open right hand that can be swapped out for when he’s not holding his spear gun. 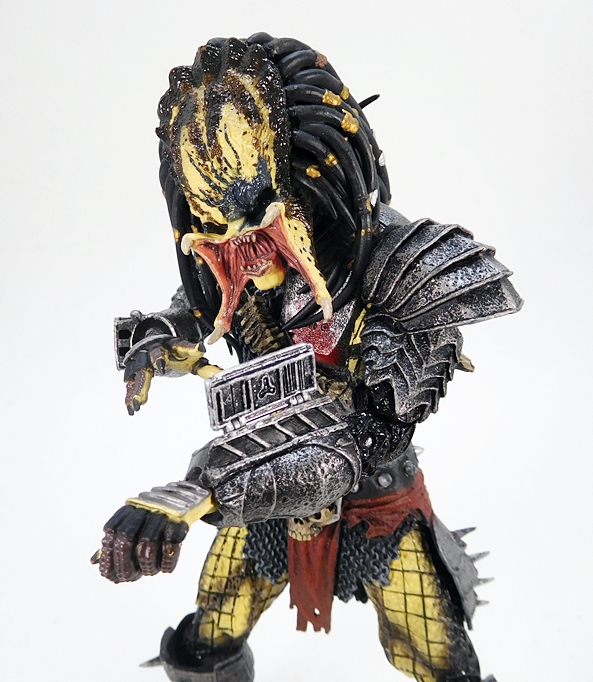 And last, but not least, Scarface includes the opening wrist computer on his left gauntlet. The hinges on this one are a lot sturdier than they’ve been on some previous releases. 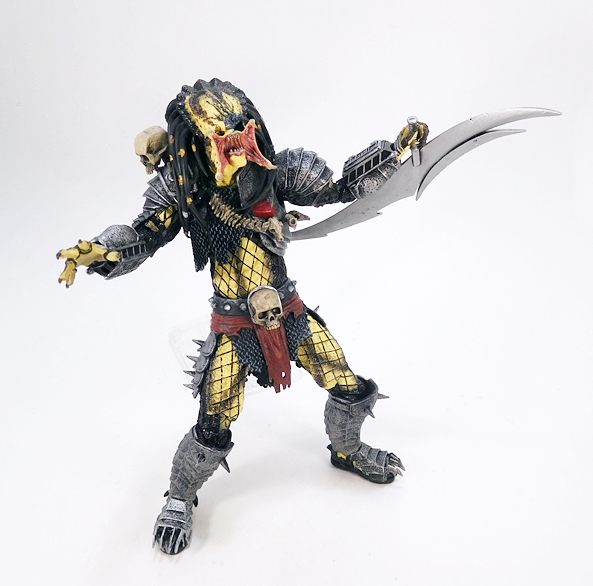 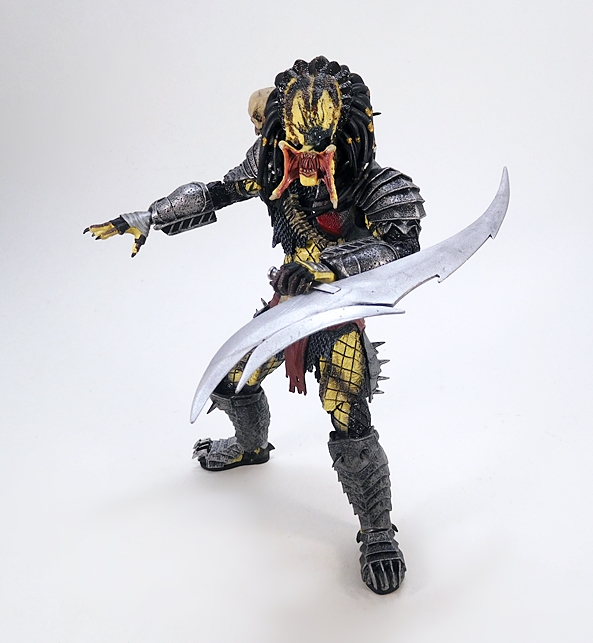 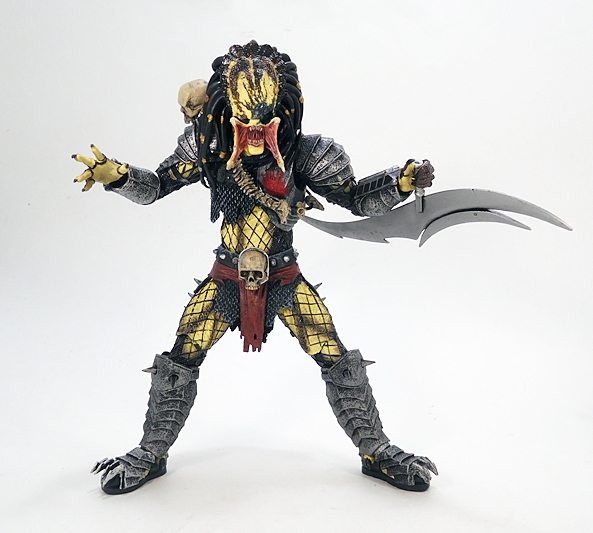 Generally speaking, I’ve been pretty good at resisting going nuts with NECA’s Predators line. It’s not that I don’t want to own them all, but I’m at that stage with my collecting, where I really have to think about how much space I have and how deep I want to go into any particular line. So far, I’ve restricted myself mostly to the boxed releases, and one or two of the carded ones. Whatever the case, I’m so very happy I decided to pick up Scarface, because he is a stand-out figure in a line populated almost entirely by stand-out figures. NECA worked their magic with this design and created a masterpiece of a figure that is far better than the rather average game deserved. I’ve had this one sitting around waiting to be opened for a while now, and I was actually surprised to see that he’s still available at the original MSRP of about $25, give or take a little, depending on where you find him. In terms of iconic designs, I’d say that the City and/or Jungle Predators are still the must-haves for any collection, but beyond that, you can’t go wrong picking up this bad boy. He’s quite simply a stunning figure.