Oh boy, have I been dreading this review! Kamala Khan is the first Marvel Legends figure in a long while that I was tempted to skip and hunt down the BAF part separately on the Ebays. Why? Because I’m really not a fan of this character or what I’ve read of her books. I also think it’s unfortunate that Marvel decided to go with her as their first major Muslim lead character, doubly so when it feels like a “Us Too!” effort after DC introduced Simon Baz to their Green Lantern lineup a few years earlier. Granted, I didn’t warm up to Baz right away, but I gave him a shot and by the time he teamed up with Jessica Cruz, I was on board. Well, I gave Kamala a shot too, but her books were another brick in the wall between me and what Marvel’s been churning out lately. At least this review has a happy ending, so read on! 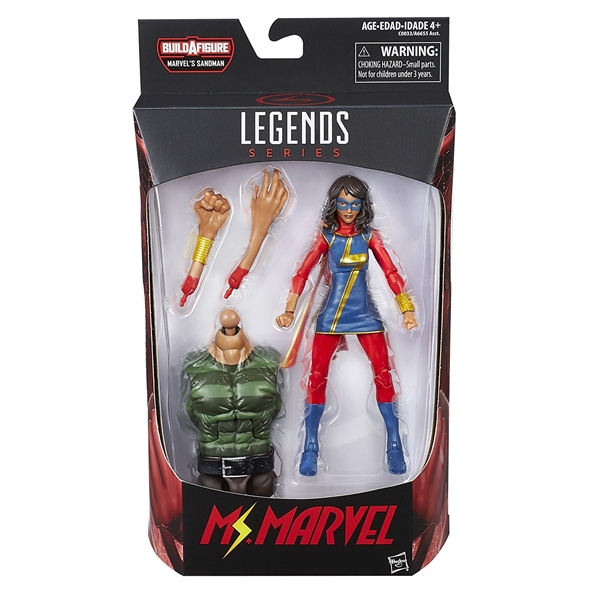 I really don’t want to spend a lot of time bitching about the character, but I feel like I should at least clarify why I don’t like Kamala. To me, she’s the epitome of a lot of that’s wrong with Marvel Comics these days. She comes off as a vacant-headed, “OMG, TWITTER AND SELFIES!!!” stereotype fangirl, who to me just isn’t worthy of the Ms. Marvel moniker. It’s another example where Marvel should have allowed the character to strike out on her own with a new super hero identity instead of once again co-opting an existing one. Hell, I would have had a lot more respect for her had they given her her own identity first, allowed her to prove herself, and then passed the baton. Just look at how much angst and maturity Carol Danvers exhibited over taking on the Captain Marvel name. OK, yeah, he was dead, but still. There was a gravitas to about the name that the comic paid respect to. That wasn’t so much the case here. But hey, the initial run of Kamala’s book won a Hugo, so I guess I’m in the minority here! And yes, that was sarcasm. Anyway, let’s take a look at the figure…

And here’s where things turn around, because my dislike for this character lies squarely in the way she’s written, but that doesn’t necessarily mean I’m not going to like the figure, because I actually do. The costume, which consists of a blue dress worn over what I assume is a red bodysuit is fresh and interesting, and Hasbro did a great job recreating it for the figure. The lower part of the dress is cast in soft plastic with slits up the sides so as not to hinder the hip articulation too badly. Her blue boots are painted on, she’s got a gold arm bracer on her left wrist, and a long scarf, which streams down her back, and is slightly reminiscent of Carol’s waist sash. The coloring makes for a very pretty looking figure, I love the combination of the blue and vibrant red and the additional gold used for the edges, bracer, and lightning bold on her chest really make the figure pop. She even has gold designs at the ends of her scarf.

The head sculpt is fairly solid. I appreciate that the mask is part of the sculpt and not just painted on. The hair looks very much on point and the paint is all fairly solid. I will throw out there that Kamala looks a lot prettier in most of the panel art than she does here, so the resemblance isn’t quite a slam-dunk, but it’s not bad either. I do wish the plastic used for the face wasn’t as waxy looking, but now I’m really looking for things to complain about.

The articulation is right on par with most of the other Legends ladies. The legs feature ball joints at the hips, double hinges in the knees, swivels in both the thighs and the tops of the boots, and the ankles have both hinges and lateral rockers. The torso features a ball joint under the chest and the neck is both hinged and ball jointed. The arms have rotating hinges in the shoulders, elbows, and wrists. Here’s where I usually complain about the arms not being double jointed at the elbows, but here there’s actually an excuse for that, as the arms are designed to pull out at the elbows so they can be replaced with her stretchy effect arms. 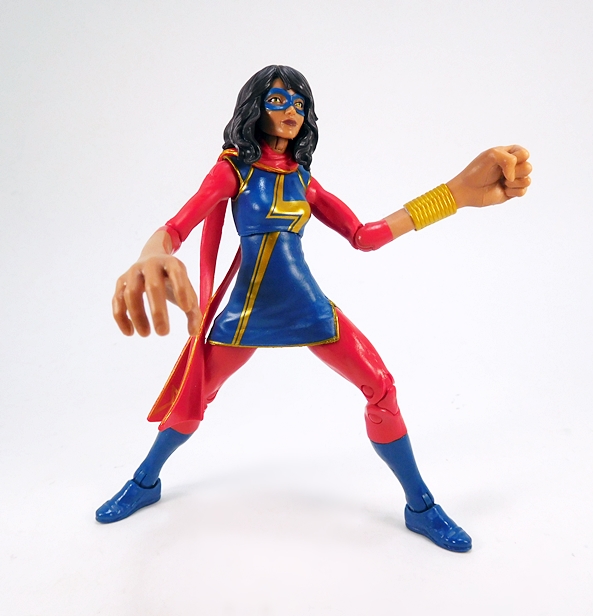 I’m a big fan of characters with stretchy powers. Plastic Man, Elongated Man, Mr. Fantastic, so I’m at least a fan of Kamala’s powers! The arms consist of an enlarged right grasping hand and a left fist. These pieces pop-and-swap very easily, although I’ve seen quite a few reports of the pegs breaking on this figure, so a modicum of care is recommended. There’s no other points of articulation in these pieces beyond the elbow joint, and while I would have really appreciated some wrist swivels, I can understand why they were omitted. The effect isn’t as well done as the recent Reed Richards figure, but it’s not bad. 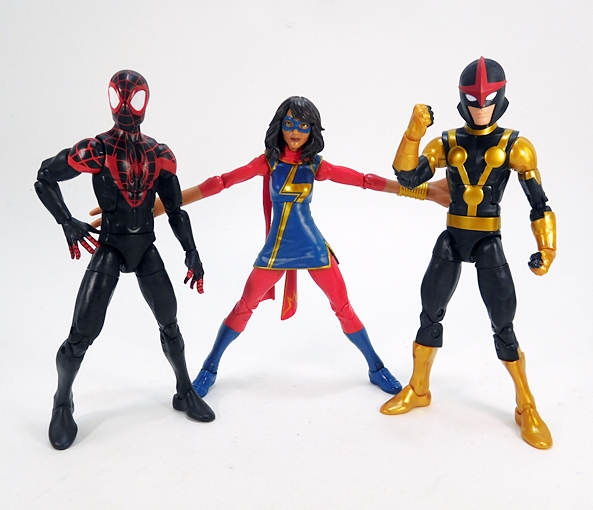 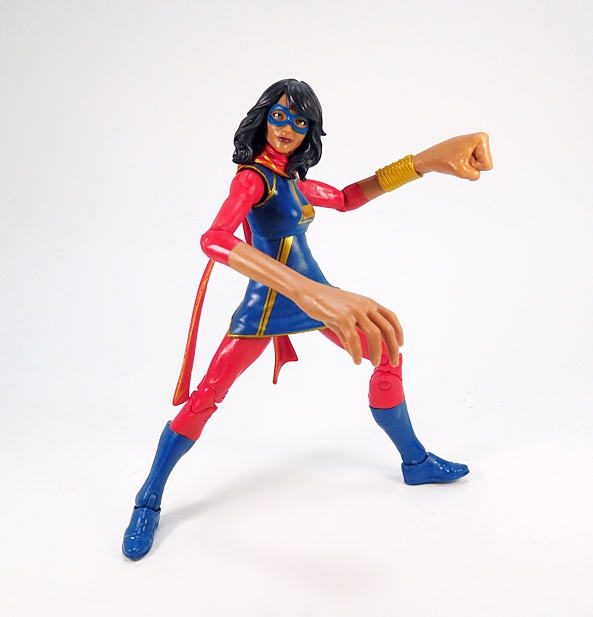 All in all, this is fun figure of a character I don’t care about. And just to be clear, I don’t want to just pick on Kamala. As a character, she’s probably fleshed out better than most of Marvel’s recent efforts. But like I said earlier, she’s an example of a wider problem in Marvel’s books which has been keeping me out of the comic shops and diving into my backlog of trades and floppies. When the inevitable shake up at Marvel comes, maybe Kamala can get turned around. Or maybe they don’t need to, because her book seems to be selling fairly well in collected editions. In the meantime, at least I got a pretty cool figure out of it.