How about that Solo: A Star Wars Story, eh? Who could have thought that such a fun and simple little space adventure could elicit so much controversy? And I’m not even talking about people picking it apart. From the “this was an unnecessary prequel” mantra to “let’s form a boycott campaign against this movie because we didn’t like another movie” all I have to say is “Holy shit, people!” Let’s all just relax and have a look at a Star Wars figure.

If you need any indicator of how much I enjoyed Solo, the fact that I’ve purchased and actually opened the entire wave of figures should do the trick. I have a short stack of figures from The Last Jedi that I just can’t bring myself to open, so it feels good to be a little excited about some SWB releases again. Qi’ra wasn’t one of my favorite things about the film, but as a character, she was perfectly serviceable. To be honest I’m just not a big fan of  Emilia Clarke, so I may be a little biased here. Oh, and she’s Figure #66. I don’t usually pay attention to the numbers in this line, but really, Hasbro? You couldn’t have thought of a more appropriate character for the 66 slot? 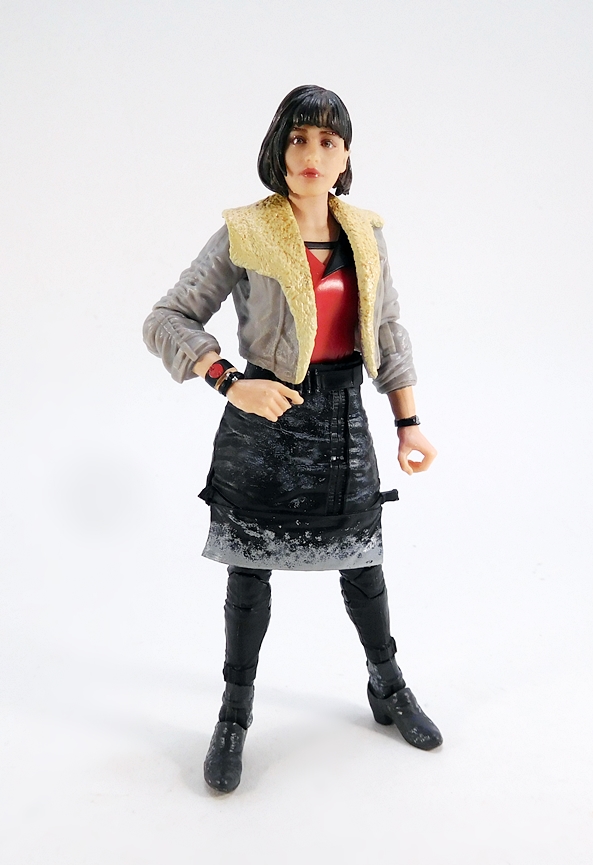 Qi’ra wore a few outfits throughout the movie, but Hasbro is dubbing this her Corellia outfit and it was a curious look to go with, since I seem to recall her only wearing it in the beginning. Indeed, while doing some research it was hard to find that many pictures of her wearing it. Either way, her sculpted digs include black boots, pants, and skirt, as well as a red top and a jacket. The skirt is a bit weird, as it’s longer in the front than in the back, it has tabs coming off the sides that don’t seem to have a function, and there’s some dirt or mud splashed up against the bottom front edge. She also has a brace of what looks like some kind of ammo or blaster charges across the front of her belt. The bit of additional mud splash on her boots is a nice touch. 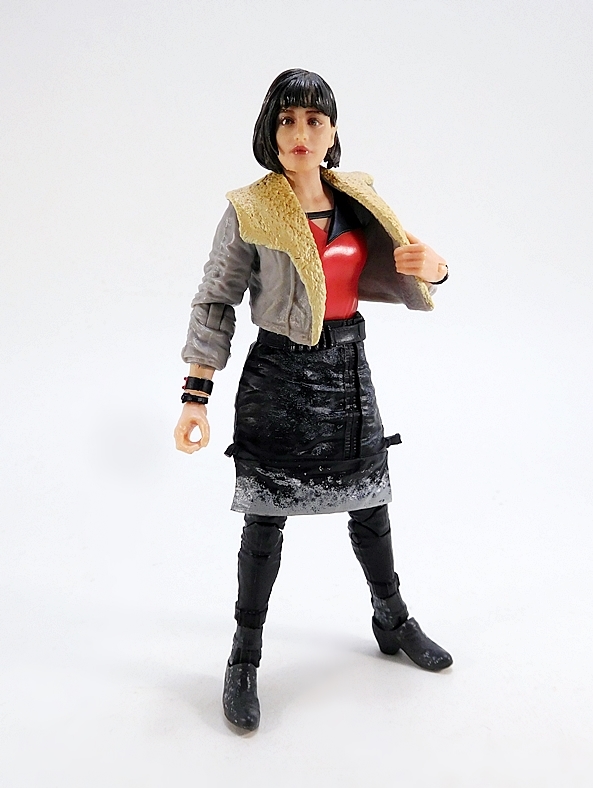 The red and black top is smooth and doesn’t have a whole lot of sculpted detail. It does, however have a front flap that’s partially pulled down. What is it with these flappy shirts in this movie? Both Lando and Han had similarly designed tops, all of which remind me a bit of the Starfleet uniforms that debuted in Star Trek II. The jacket is gray with a textured collar that extends down the front and looks like it’s supposed to be some kind of wool or fur. The sculpted sleeves are also rumpled quite a bit and looking like they’ve been partially pushed up to reveal the various devices on her wrists. All in all, Hasbro did a nice job on the outfit. 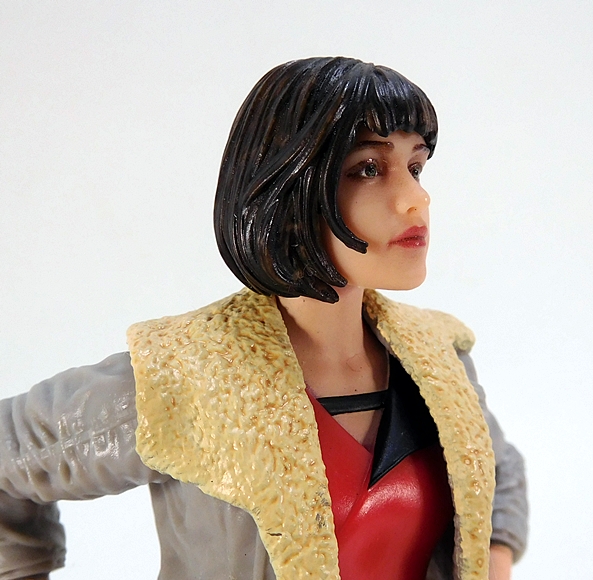 I’m a bit torn on the portrait. If I were judging it strictly on likeness, I wouldn’t give it the highest marks. There are some similarities here and there, particularly in her lips. It’s not the worst likeness this line has turned out, but it’s certainly not the best either. Still, it’s certainly better than Funko did with the likeness of Clarke from their 6-inch Game of Thrones line. The face here is very pretty and the paint on her lips and printing on her eyes are both on point. The somewhat distinctive haircut is recreated especially well. All in all, I’d say not bad, just not great. 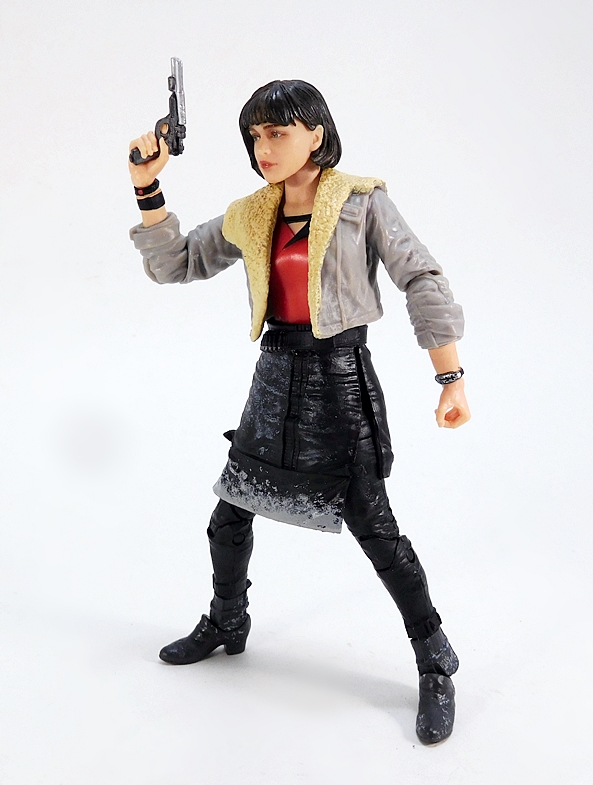 Qi’ra comes with only one accessory and that’s her blaster. It’s a very small, double-barreled pistol with a gray body and silver barrels. Oddly enough it’s even designed to come apart. It’s a nice little gun and while it’s meant for her right hand with the trigger finger, she can actually hold it in either one. I just wish there was somewhere on her to store it.

As for poseability, we have some pretty standard female SWB articulation on display here, which means rotating hinges in the shoulders, elbows, and wrists. The legs have ball joints at the hips, double hinges in the knees, and the ankles have both hinges and lateral rockers. There are swivels in the thighs, a ball joint at the waist, and her neck is both hinged and ball jointed. The skirt is slit up the sides so it doesn’t impede her hip movement all that much, and the range of motion on her elbows is surprisingly good. 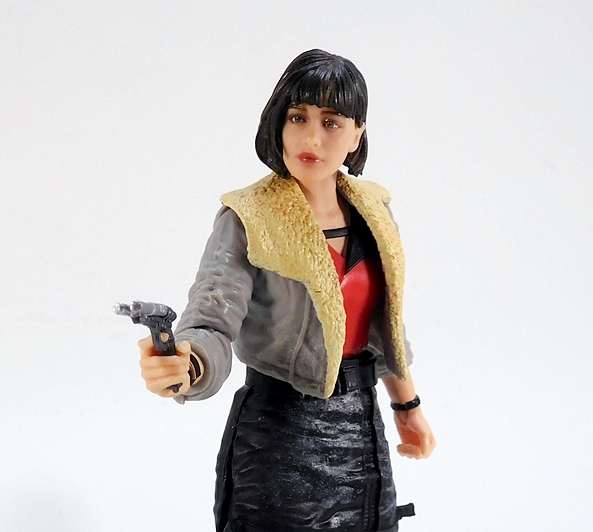 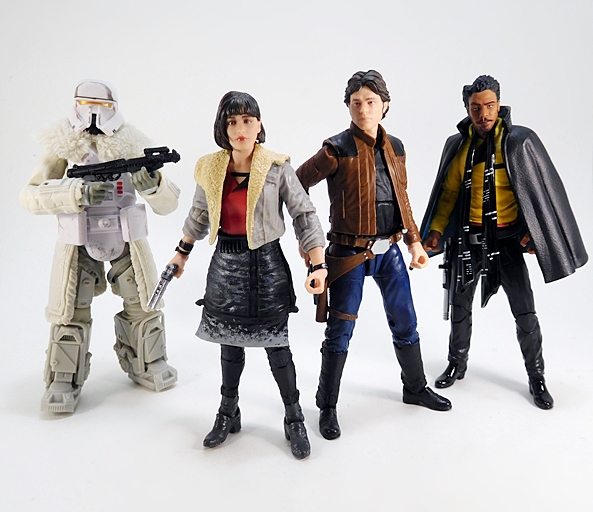 Qi’ra was actually the hardest figure in this assortment for me to find. I happened upon the Range Trooper before any of the others, and I even saw one more on the pegs since then. Meanwhile the pegs are always chock full of Lando and Han, almost to the point where they’re outnumbering DJ from The Last Jedi. Can’t imagine why that figure isn’t selling! As for Qi’ra, I only found her once and she hasn’t turned up again since, so I’m glad I bought her when I did. I’m also glad that Hasbro is following through with another wave of 6-inch Black Series Solo figures. I’ll be keeping my eye out for those!