It’s another Marvel Monday, folks, and this marks the beginning of the third and final week of my Trifecta of Hell Weeks at work. Don’t ask. Just don’t. Hopefully after this week I can relax for a short bit, but I have another one brewing on the horizon. But it’s all good because work pays for toys and video games and those are the things that keep me going. Besides, there’s nothing that helps assuage the dawning of a new week of horrors than opening up a new Marvel Legends figure. Of course, new is a relative term, because today I’m sticking with the Sandman Wave, which I believe was released last year, if not the year before it. OMG, I’M SO FAR BEHIND!!! 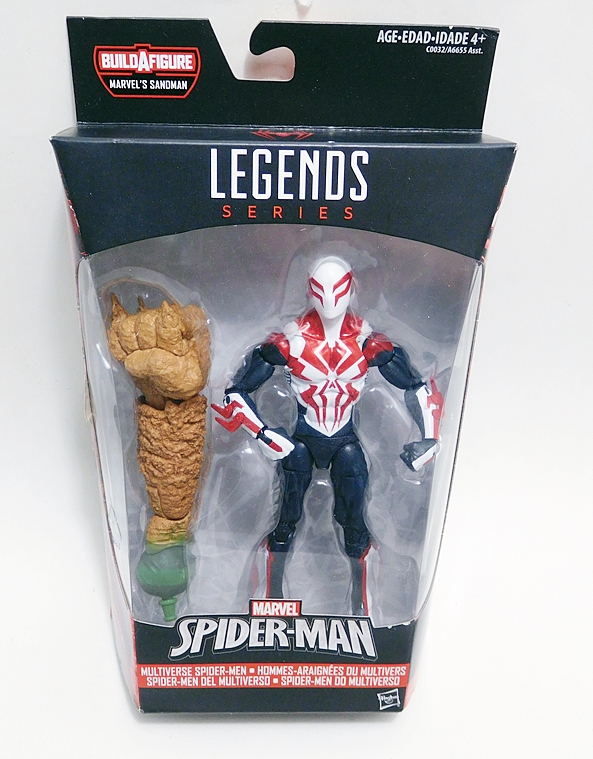 As someone who is taking a sabbatical from Marvel Comics these days (until they get better), this costume is totally unfamiliar to me. Indeed, the last time I encountered Miguel O’Hara in my funnybooks was when he appeared in the pages of Superior Spider-Man and Spider-Verse and on both occasions he was still wearing the old suit. As I understand it, this is Miguel’s contemporary look. 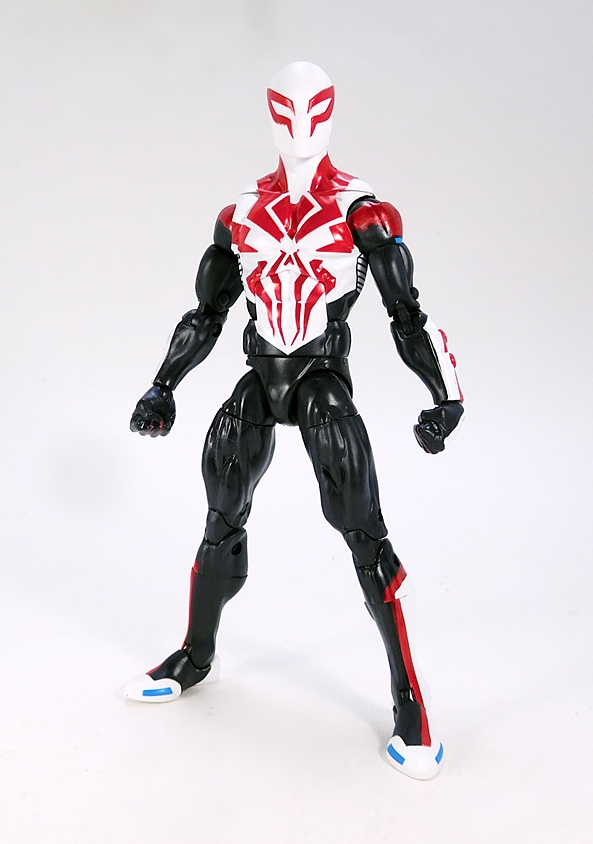 And if there’s one area where Marvel Comics and I don’t have a quarrel it’s with the new costume designs. Don’t get me wrong, I still prefer Miguel’s old look, but this is still a pretty spiffy update that I happen to like a lot. The dark blue and metallic red have been replaced with black, white, and… metallic red! The matte black and white contrasts beautifully with each other and the red gives the figure a nice, futuristic pop. The design on the chest is pretty busy and a very abstract re-imagining of the old costume’s skull emblem. but it also has more of a spider-legs flavor to it, which I like. Mmm… spider legs flavor. Miguel also has a few blue bars on his feet and shoulders. 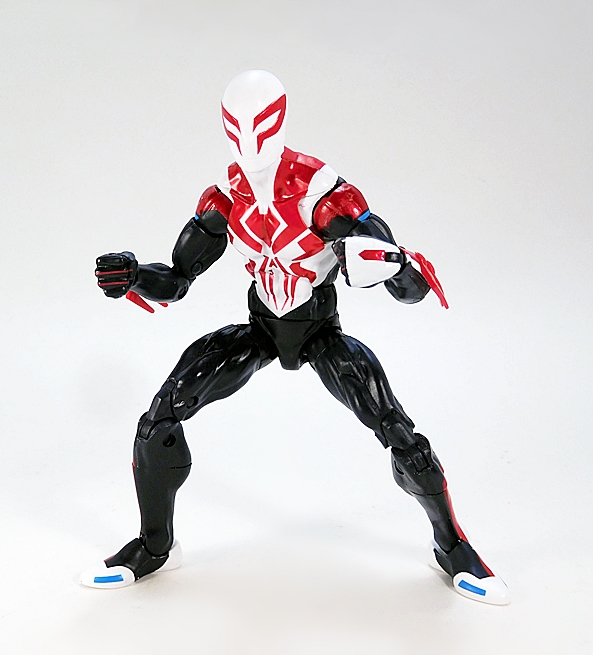 Overall, the paint on my figure is pretty good. The white is bright and doesn’t suffer from any noticeable bleed through from the black plastic. The lines are also quite crisp, especially between the red and white. I did have a little smudge of red paint on my figure’s left shoulder hinge, but I was able to chip most of it off with my fingernail. I’m a little concerned that the paint will rub in the shoulder hinges, but then I don’t tend to repose my figures a lot, so I should be OK. I’ll note that the lower elbow pins are not painted to match the surrounding white, and while I know that really pisses off some collectors, I can’t say as it bothers me much. 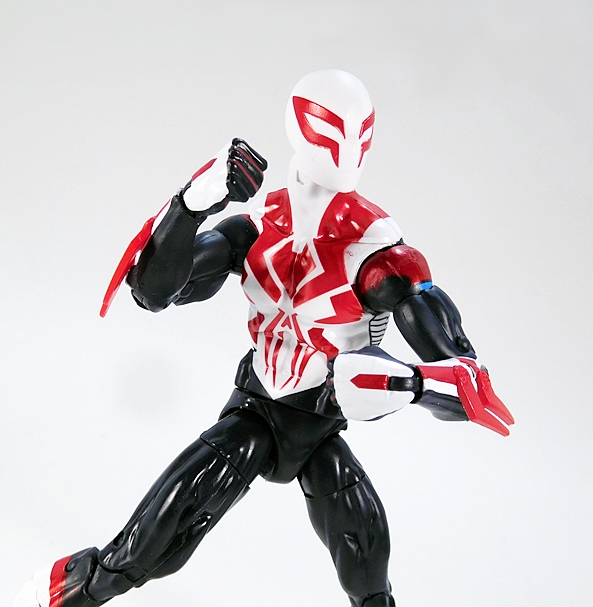 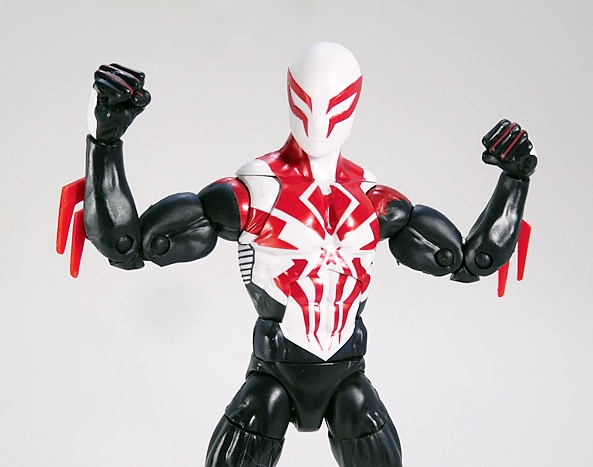 Miguel’s makeover may have left out the web cape, but the blades on the forearms are still there. I like how they seem to protrude from the red striping. It would have been nice if Hasbro could have painted them metallic red to match better, but they still look neat.

The new mask is the one aspect of the costume that has the strongest connection to the older one. It retains that minimalist, and just a little creepy, futuristic flavor. I dig it a lot! 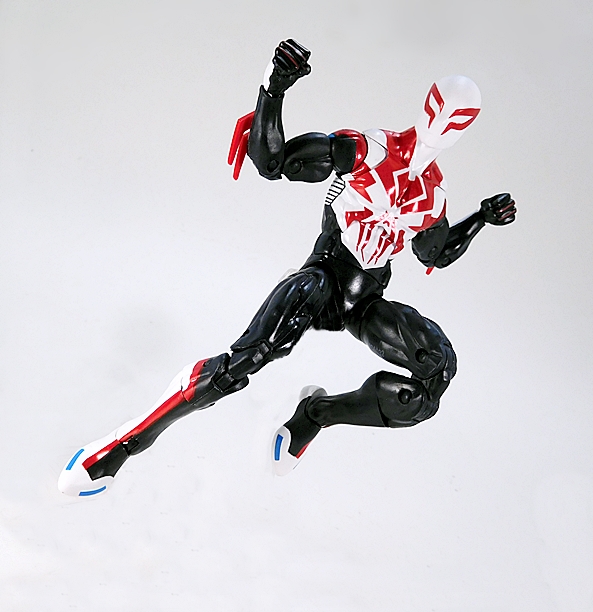 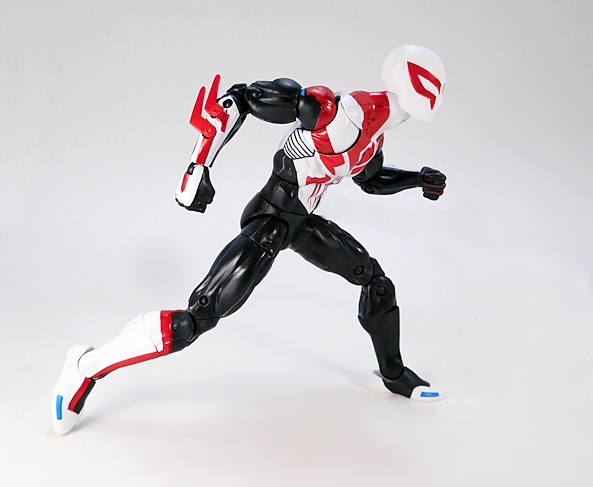 The articulation is right in line with other recent Spider-Man figures. And yes, as already mentioned, he has the additional shoulder crunches, which is always a treat. The arms have rotating hinges in the shoulders and wrists, double hinges in the elbows, and swivels in the biceps. The legs have ball joints at the hips, swivels in the thighs and lower legs, double hinges in the knees, and both hinges and lateral rockers in the ankles. The torso sports a swivel at the waist and an ab-crunch hinge below the chest, and the neck is both hinged and ball jointed. The joints on this guy feel great and he is loads of fun to play with.

For now, this version of Spider-Man 2099 is more like a concept figure to me. I doubt I’ll ever get around to reading this run of comics and who knows how long they’ll keep this look for him. With that being said, this figure was an absolute bitch for me to find. It seems like I’ve been saying that a lot lately. To this day I’ve never seen him at retail, and even my usual source for Marvel Legends, Amazon was selling him for upwards of $35. A friend of mine came across a second one in her neck of the woods and hooked me up, and for that I am eternally grateful. And now I only have two more figures to open before I can build my Sandman, but next week I’ll likely be flipping over to another wave, because the Wheel of Marvel Legends can be a fickle bitch.