Who’s ready for another Marvel movie, eh? Getting tired of them yet. I’m honestly not, although lately I’ve been a little more excited for the more peripheral films rather than the Avengers-centric stuff. Well, Ant-Man and The Wasp hits theaters this week and I’ve already got my tickets lined up for Thursday night and this is one that I’m really looking forward to. To celebrate, I’m putting the Wheel of Marvel Legends aside and casting randomness to the wind. Instead, I’m pulling out the eponymous stars of this flick for the next today and the next Marvel Monday. So today let’s have a look at Scott Lang in his new Ant-Man suit, and next Monday we’ll check out Hope Van Dyne in her Wasp costume.

Egads, how I love the font they used for the title of this flick. It’s so bold and exciting and goofy and comic booky. Putting it on the box is almost enough to make me save the package, but I need room for more toys, so that’s not going to happen. I’ll also toss out how much I dig the idea of combining figures of different MCU movies into one wave. In this case, the Cull Obsidian Wave is mixed with Infinity War and this pair from Ant-Man and The Wasp. I think it allows them to spread the love, and let’s face it… there’s usually enough MCU films making their rounds at around the same time so that wave sharing can still feel fresh. Scott Lang comes packaged unmasked, but I’m going to kick things off by looking at him with the helmet on, because I really need to get a running start to tackle that Paul Rudd head. 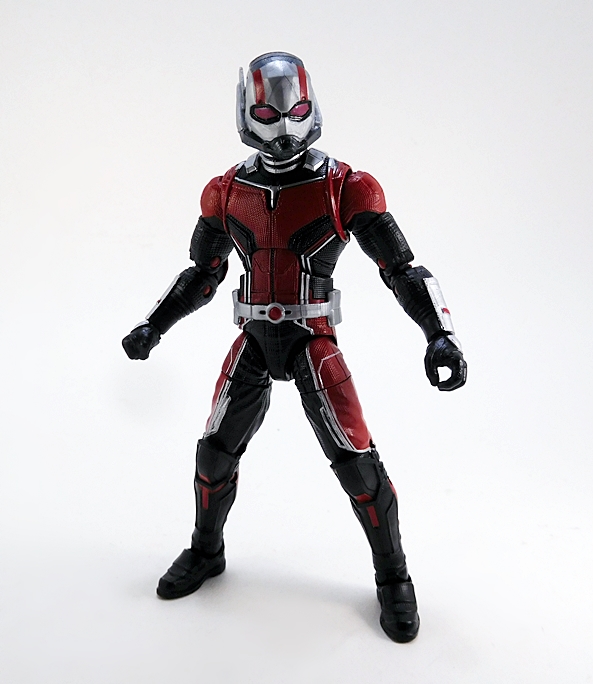 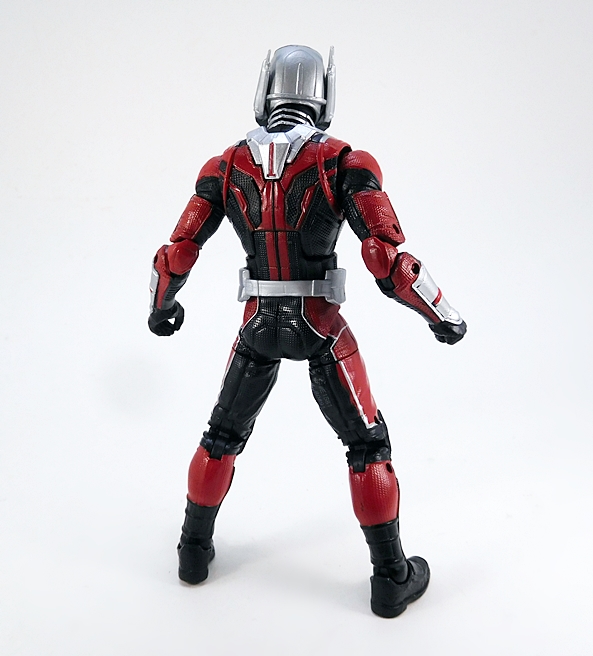 So, straight away I’ll say that I do prefer the Ant-Man costume from the original film over this one and the one that debuted in Civil War. This one feels even more streamlined than the last one and it’s not that I don’t like this one, I really do, but there was something extra cool about the more complex and less polished look of the original. The belt is a separate piece now, but there isn’t a whole lot of detail going on there. Most of the lines separating the red and black parts of the suit are part of the sculpt, which is always a big plus for me. You get the same mix of black, red, and silver as on the original, as well as that lovely texturing all over the suit. Overall, the coloring is nice and the paint application is pretty clean. There are a few lines where the silver could have been a wee bit sharper, but nothing terrible. And yes, there are some unpainted pegs in the knee and elbow hinges, so if that pisses you off… well, prepare to be pissed off, I guess.

Once again, I dig the old style helmet a lot more than this one, which is a lot more streamlined. The helmet sculpt looks solid enough, but maybe a little rough around the edges as I get in close. As many of you know I’m not a big fan of this swirly gray plastic Hasbro likes to use. It’s a shame that they couldn’t have painted the helmet with the same silver they use for the rest of the suit. Hell, even the stuff they used for Deathlok’s arms looked a lot better than this. Another shame is that they couldn’t have gone with sculpted eyes and tinted clear lenses for the mask. They did it for the Ant-Man BAF from Civil War and as we’ll see next week they did it for Wasp too. Moving on to the alternate head… 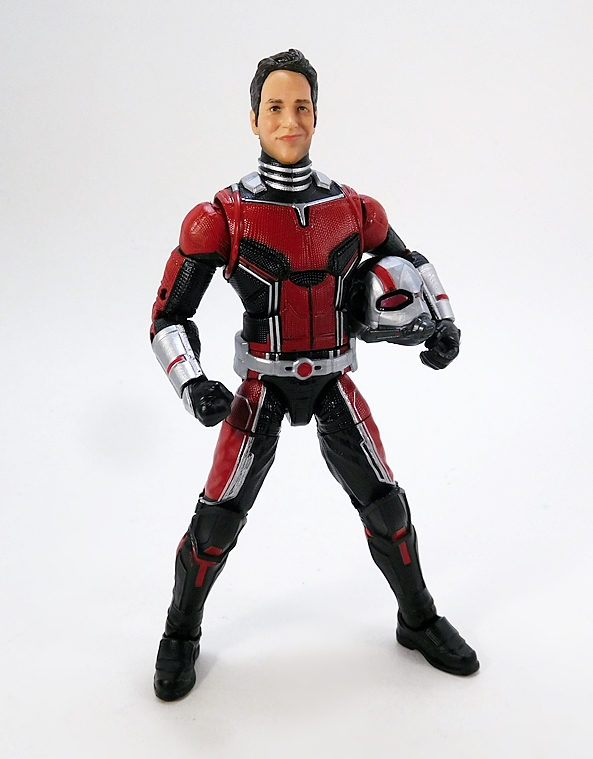 I swear to God I saw pictures of this head in pre-production that looked absolutely amazing, but this isn’t it. I’m not sure what happened between then and now, but I think the final head came out too elongated. Maybe it got pinched in the molding process. I mean, it’s definitely Paul Rudd, but it comes off looking more like a caricature of him and not so much a realistic portrait. Besides the fact that it looks elongated, I’m going to chalk a lot of it up to the expression they went with. The shit-eating smirk kind of fits the character, and it’s a nice attempt at endowing the figure with a lot of personality, but it just comes off as creepy and weird to me. I’m going to go with points for trying here, but I don’t think they quite hit the mark. 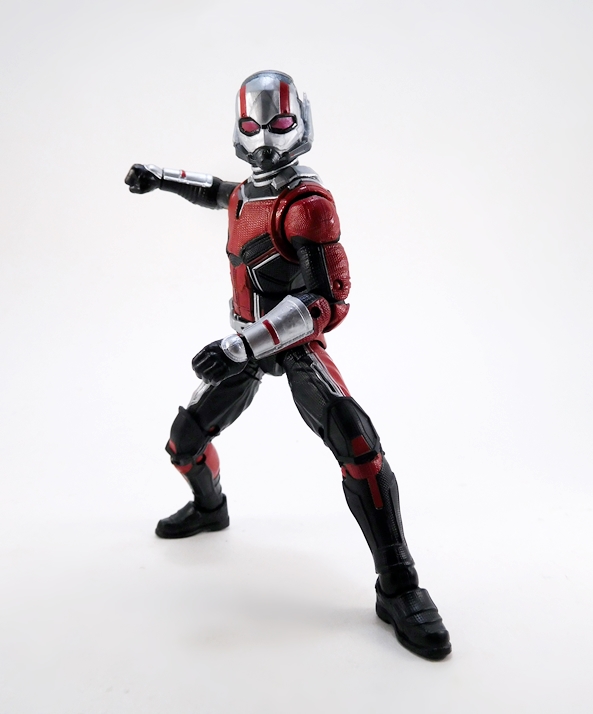 The articulation is everything I’ve come to expect from my Marvel Legends figures. The arms feature rotating hinges in the shoulders and wrists, double hinges in the elbows, and swivels in the biceps. It’s worth noting that the shoulder articulation is a tad more limited from the sculpt and even the elbows don’t bend as far as I would have liked. The legs are ball jointed at the hips, have swivels in the thighs, double hinges in the knees, and the ankles have both hinges and lateral rockers. You get a swivel in the waist, an ab-crunch hinge under the chest and the head is both ball jointed and hinged. A bit better range of motion in the arms would have been appreciated, but not bad.

Scott Lang has been one of the most pleasant surprises for me in the MCU and I’m happy to see him getting a figure from each one of his appearances. The unmasked head is a bit of a hiccup, but I give them high marks for trying and I’ll still likely display the figure with it from time to time. And yes, I’m going to happily pick up the Marvel Studios: First 10 Years two-pack because it not only nets me a Civil War version of Lang in normal size, but it also comes with what looks like a better unmasked head. And also a figure of Yellowjacket, which is something I’ve wanted for a long, long time, especially since Hot Toys’ version never made it past prototype. Join me again next week, when I’ll have seen the flick and have a look at The Wasp!