If you follow me on Twitter, then you know how hard it has been to find me some Power of the Primes toys. Indeed, the poor distribution in my area and the scalper prices I’ve been seeing online played a big part in me justifying a roll back to three reviews a week and killing off Transformers Thursday. Thankfully I managed to bust that log jam and pick up the remaining Dinobots as well as the rest of the Terrorcons. And while I’m not about to bring back Transformers Thursday, I’d say it’s a safe bet that you’ll be seeing Transformers reviews dominating Fridays for the next month or so. So, hooray for more Transformers reviews! I’m really excited to get to the Terrorcons, but I feel like I should take care of unfinished business with the Dinobots first, so today I’m opening up Sludge.

And here’s the in-packaged shot, showing off some pretty rad character art. I like the fact that they’ve been using the Dino Modes for the card art, even though the figure comes packaged in his robot mode. It also makes me happy that the Copyright Gods allowed Sludge to keep his name, unlike poor Slag… I mean, Slug. I’ve yet to see these guys in the wild and for the longest time they were selling for around $35 at my usual online sources, but just last week Amazon dropped them to regular retail and I jumped on them. Let’s start with Sludge’s alt mode… 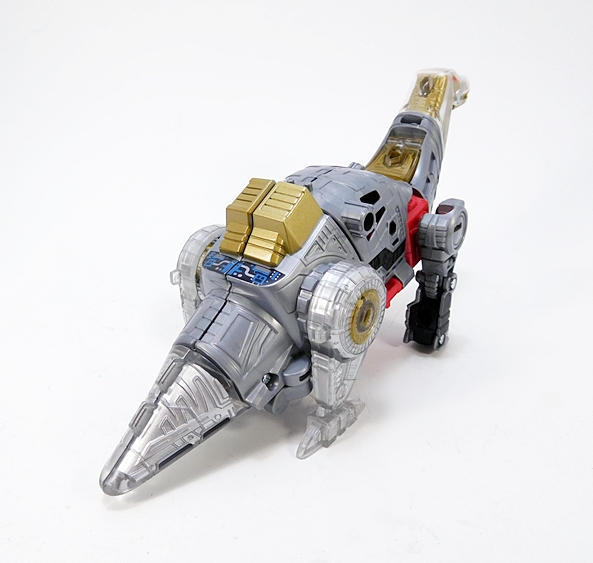 So, I don’t even know what’s going on in the world of dinosaur taxonomy these days, but back when I was a kid this was called a Brontosaurus and since we all know dinosaurs are an invention of The Illuminati anyway, I’m sticking with that name. And he’s a pretty great looking little dinosaur. Hasbro went nuts with the sculpting on these Dinos, giving them all sorts of panel lines and and little vents. Sludge also has some open panels on his back plates that allows you to see into his inner workings, which is kind of neat. He also has some peg holes on the sides, just in case you want to weaponize him. Hasbro even slapped some stickers on him to recreate the circuitry behind the vents on his back.

I really dig the way Hasbro managed to recapture the deco of the original toys by using clear plastic over gold for part of the head. The tail and back legs are also clear with what looks to be silver painted in from the inside to create a similar effect, along with some gold circling the joint. The gray and red plastic looks pretty close to the original toy too. Throw in some black and gold paint, and you’ve got a deco that does the old G1 release proud.

The articulation is serviceable. The front legs are ball jointed where they meet the body, have hinges in the knees and swivels halfway between. The back legs only rotate at the body and there’s no tail articulation at all. The jaw will open a bit, and there’s a swivel at the neck, which is there for transformation purposes, but it can be used to make Sludge tilt his head from side to side. So far so good, but then we get to size…

All in all, if I were looking at this alt mode in a vacuum, I’d have very little nitpicks, but I keep coming back to how ridiculously small these guys are, even for Deluxe Classes. I’ve been a Transformers collector almost all my life and I’m willing to overlook a lot of scale issues, but it’s hard for me to overlook this one. Just check him out next to Generations Wheeljack. As Grimlock might say, “Dino not same size as car! Why Dino same size as car?” Actually, Sludge looks a little smaller than Wheeljack’s auto mode. In a perfect world, I think modern Dinobots should be Leader Class, but I would have happily accepted Voyager Class. These guys are supposed to be big and imposing, but here he just looks puny and pathetic. Oh well. Let’s transform him and check out his robot mode.

There’s nothing too complicated going on with the transformation here and the resulting bot is pretty damn good. The dino hind legs are a little kibbly on his lower legs, but I do like how the two halves of the tail fold to the back and serve as additional heel spurs. I think the biggest departure here from the Sludge design I’m used to seeing is the way the wings are lower down on his torso and not up over his shoulders. It’s not a big deal to me, and you can actually just swing those all the way back if you want to give him a cleaner look from the front. It’s worth noting that Sludge’s combiner port lands on his back, giving him a clean and distinctive torso design.

He’s not quite as tidy in the back, but there’s nothing here that’s too terrible. The dino neck and head hang down his back, forming a pretty copious backpack, but that was something I expected. The deco in robot mode is more or less the same as in his alt mode. There’s more black and red showing and I still think all the colors look great. It’s hard to imagine a Deluxe sized update to Sludge turning out better than this guy.

The head sculpt is quite solid too. Sludge always had a sad and derpy look to me, and this expression here carries that pretty nicely. The paint used for the face and eyes looks great. Here you can also make out the tiny Autobot insignia printed on his chest. Much like the alt mode, I’ve got no major  complaints with the robot mode, until we get to that ugly issue of size and scaling. 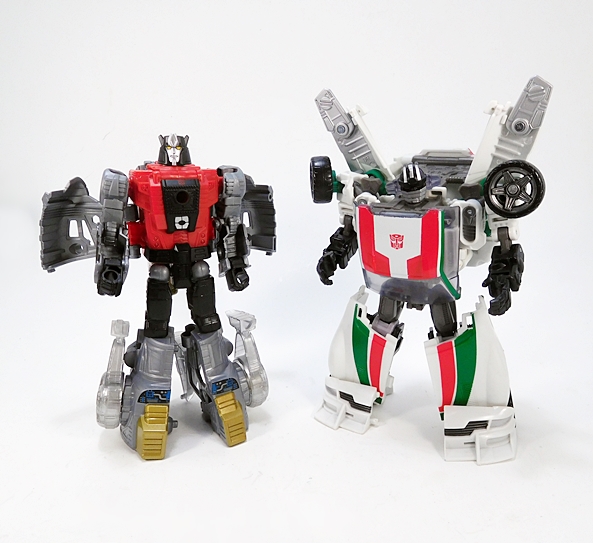 Here’s a size comparison with Generations Wheeljack in robot mode and this just doesn’t work for me at all. Wheeljack looks like he could probably take Sludge in a fight and that’s not right. Oh yeah, and I forgot to turn his forearms around in this photo… my bad. 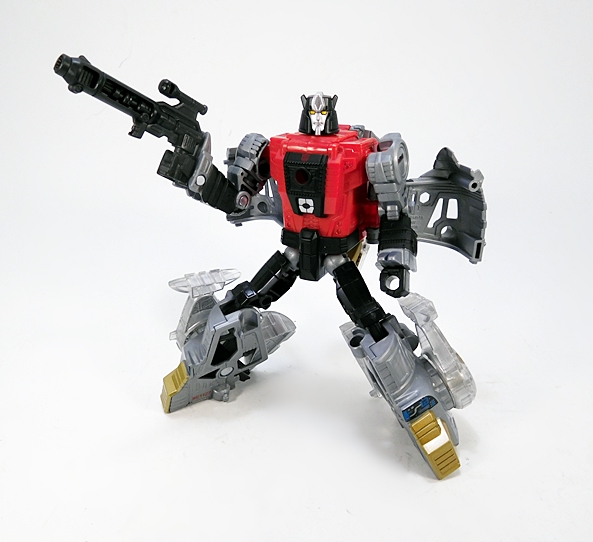 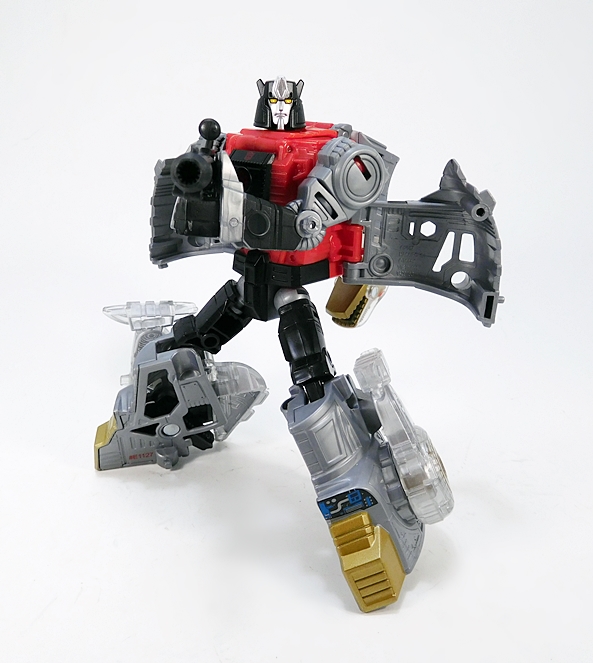 Sludge comes with two accessories, a gun and his Prime Armor piece. You should know by now that I’m not going to waste any time on the Prime Armor piece, other than to say it looks like the same one we got with Swoop and Slug. The gun is also recycled and is the exact same one that came with Slug. I wouldn’t mind so much if Hasbro had given us guns with all of the Dinobots. I mean, come on, Hasbro. If you’re saving money packing in the same gun, just go ahead and arm all of them. On the plus side, I do really dig how Sludge can hold the gun with both hands. 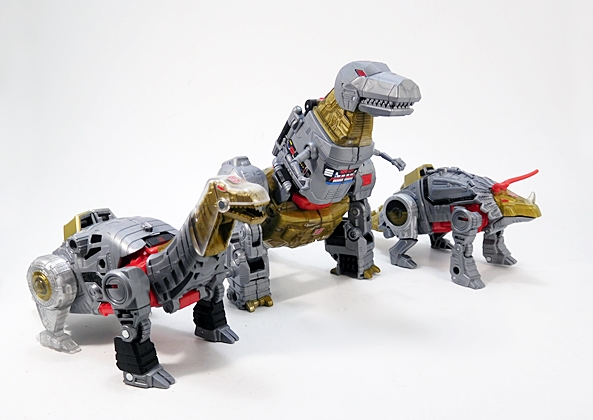 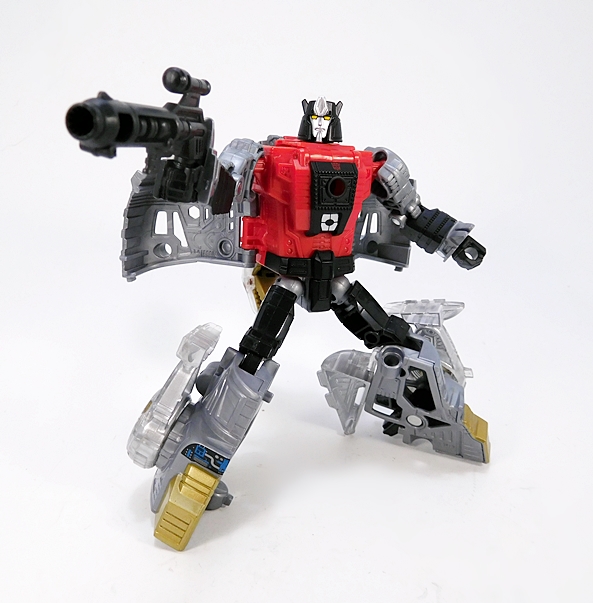 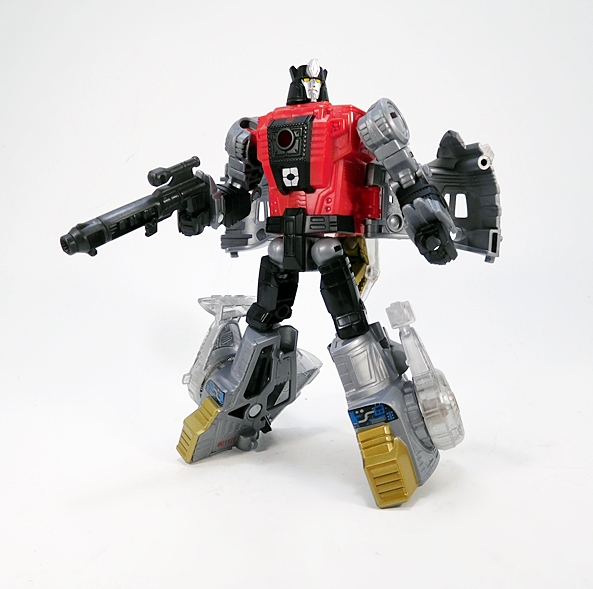 At the risk of sounding like a broken record, my feelings about Sludge are the same ones I had with Slug. He’s features a great sculpt, fantastic coloring, and has excellent robot and alt modes, but in the end he’s too small to interact with my other Transformers. Maybe I can have them fight Combiner Wars Devastator, but that’s about it. As an isolated team, I think the PotP versions of the first three Dinobots look great together, but I just can’t get past the scaling issues. Only Swoop escapes this problem, because I can get behind him being a little smaller. The saddest thing is that I think these molds are detailed enough where they could have worked as Voyager Class figures. Has anyone done up-scaled KO versions of these? Because that needs to happen. Next week, I’ll wrap up my look at these guys with Snarl!