I’ve had a grueling week at work, but what better way to end it then with a new convertorobot. Yes, it’s nice to actually have some consistent Transformers content again because I really missed these guys. And with the Dinobots finally done, I am really anxious to start opening the rest of the Power of the Primes Terrorcons, but before that I thought I’d double back and hit some unfinished business with Titans Return. Let’s check out Overlord!

As with all the Titans Return Leader Class figures, Overlord comes in a big and chunky window box and packaged in his robot mode. My figure’s box got pretty beaten up, but I got a terrific deal on him, so I’m fine with that. I was a little late picking this one up because I was quick to buy Sky Shadow and so I was probably not as anxious to double-dip on a big Leader Class mold. Of course, Overlord is no mere repaint of Sky Shadow, there’s new stuff going on here, and while this figure does invoke a bit of a “been there, done that” feeling in me, there’s plenty new here to love. And since I’ve already reviewed Sky Shadow, you can expect a fair share of comparisons here. Overlord has two alt modes, so let’s start with the tank! 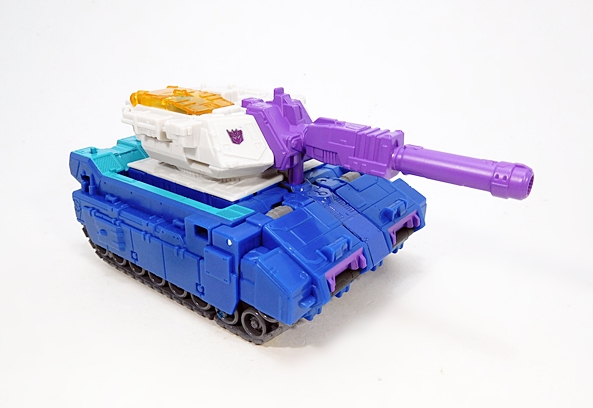 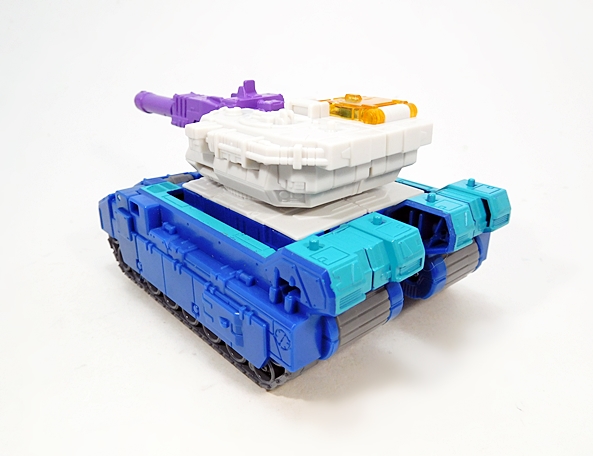 The tank mode is identical to Sky Shadow’s only with a fresh coat of paint… or to be more accurate newly colored plastic. I’ll confess the red and crimson deco looks a lot sharper to me than this white, blue, teal, and purple, but then I tend to find these colors to be more iconic, so it’s a bit of a toss-up as to which one is my favorite. Throw in the translucent yellow hatch and the twin Decepticon insignia straddling the gun and there’s no doubt who this tank is supposed to be! And it’s not that these colors don’t work for me. They’re certainly bright and easy on the eyes and really make the toy pop. 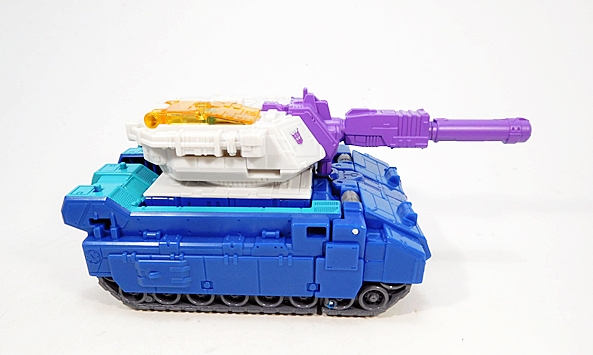 Beyond the deco, this little tank features some fantastic sculpted detail. You get panel lines and hatches, vents, compartments, and some molded treads with wheels on the bottom to help it roll into action. I also love that they sculpted the rifling inside the barrel of the cannon. The turret does not rotate nor does the gun elevate, but the hatch does open to give a place for Dreadnaut to sit. Moving on to the jet mode… 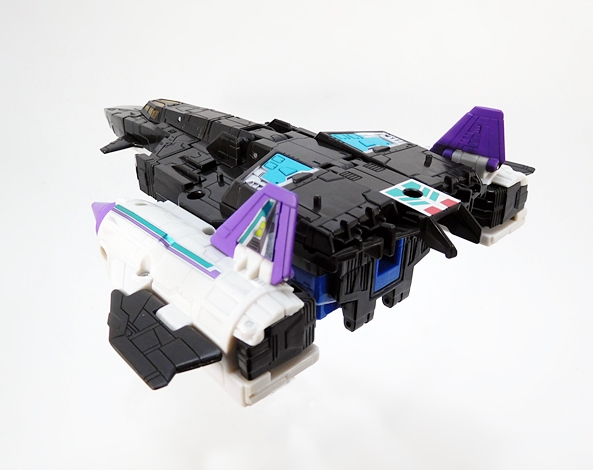 And here’s where the biggest changes in the alt modes come into play. Sky Shadow’s jet mode looked all super sci-fi and stealthy, whereas Overlords is clearly inspired by an SR-71 Blackbird. And I say inspired by, because this mold eschews the sexy curves and contours of the Blackbird for a more angular design, but the cylindrical pylons with pointed tips are unmistakable. Take away those, and I’m getting a strong Cobra Night Raven feel off the body, and that’s not a bad thing. And like the tank mode, the cockpit even opens to offer Dreadnaut a place to sit.

The deco here is still mostly black like Sky Shadow with the main departure being the white and purple on the pylons. The jet features some silver and teal panels on top to simulate stickers from the original G1 toy, but there are also some foil stickers here for the striping on the pylons, deco on the dorsal fins, and a panel at the back. Oh yeah, you can also take the cannon from Overlord’s tank mode and plug it into the back of the jet, so long as your happy having a cannon-less tank rolling around. Before we move on to the robot mode, let’s check out Overlord’s base mode!

I don’t expect much from these base modes, but this one isn’t too bad. I mean, yeah it looks like what it is: A jet standing on its end with the robot legs spread and a gun protruding where his junk should be. But hey, it’s got a tower with a little platform for a Titan Master to stand on and another little control area on the pylon and plenty of pegs to stand other Titan Masters. It’s not great, I’m never going to display it like this, but if I were a kid again playing with my toys, I’m sure I could get some fun out of this. Besides, the fact that it exists doesn’t hurt either of the other modes, so I can feel free to take it or leave it. 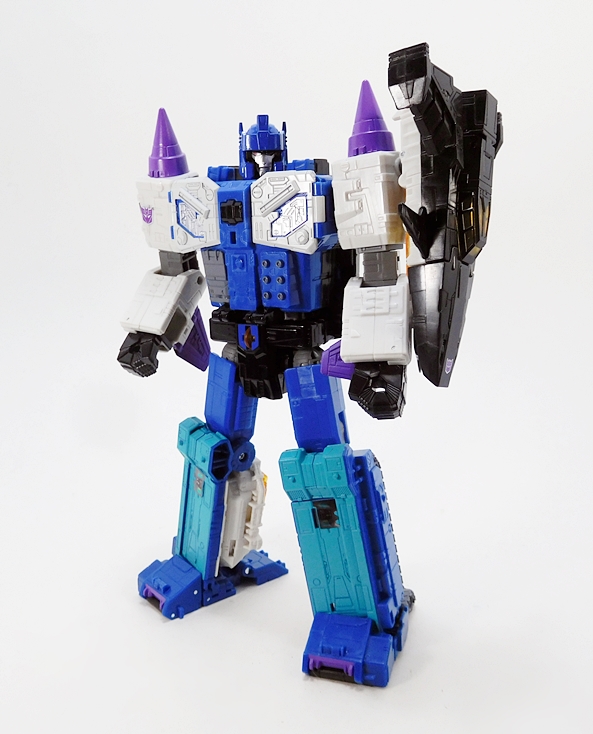 And that brings us to Overlord’s robot mode. As with Sky Shadow, the tank transforms into the legs and the jet into the upper half, and Oh boy, this sure is the Overlord I know and love. He’s big, he’s beautiful, and he’s got that great squared-off G1 design aesthetic. His iconic shoulder cones are right where they belong and the front half of his jet attaches to his arm to drive the homage home. Of course, if you prefer your robots more symmetrical and without giant jet kibble on their arm, you can always just leave it off or plug it into his back or even his front. Also, I absolutely love the ankles on this guy. They have such a great range of motion allowing his feet to be flat on the ground no matter what stance you put him in. Damn, he’s a fun figure to play around with!

Dreadnaut makes for a great head and fits into the larger helmet, while still allowing for full rotation at the neck. The silver paint on the face is gorgeous and the red eyes are sharp. The chest features all the right details, including the weapon systems in his lower torso, which in this case don’t actually deploy but rather are just there for show. 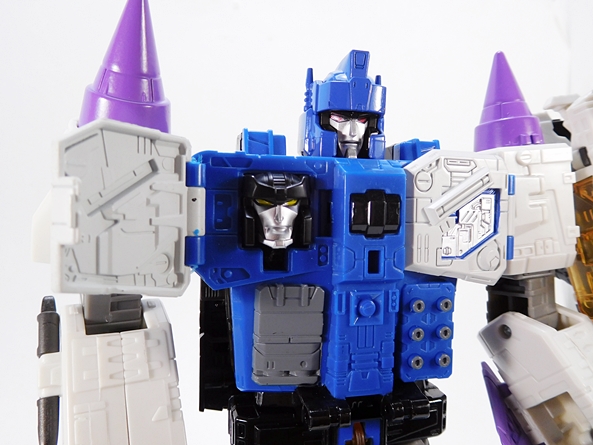 The chest hatches do, however, open, so you can power him up with extra Titan Masters. It’s a great nod back to the old Power Master gimmick in the original toy. It’s also cool that this gimmick carries over to the Power of the Primes Power Masters and even make a little more sense in that context. A word of caution, however, I found the Titan Masters are a bitch to get out once I put them in there.

As expected, the cannon for Overlord’s tank mode serves as a hand gun for his robot mode and he can hold it in either hand. 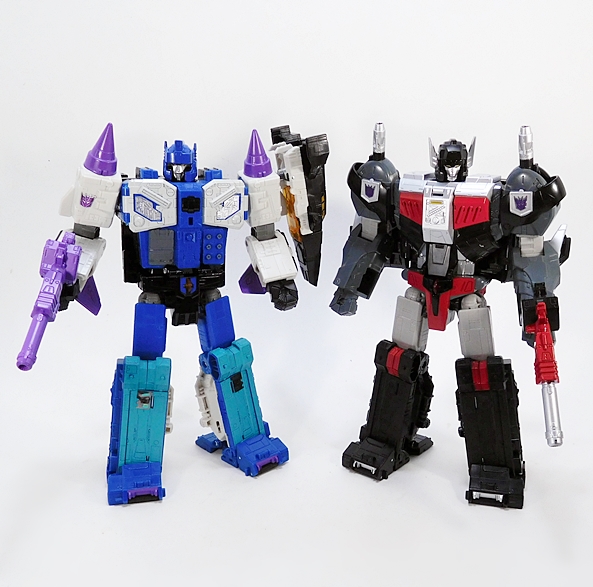 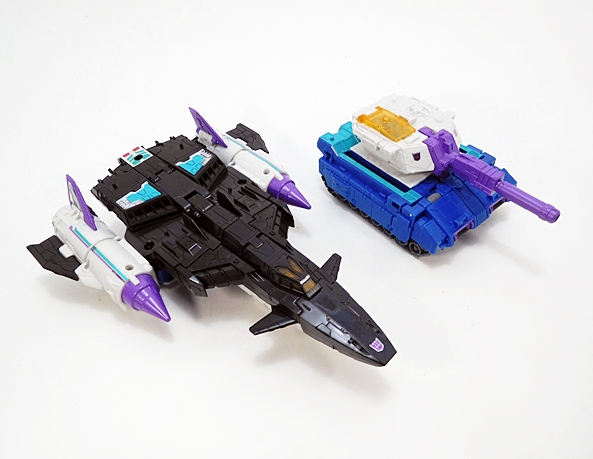 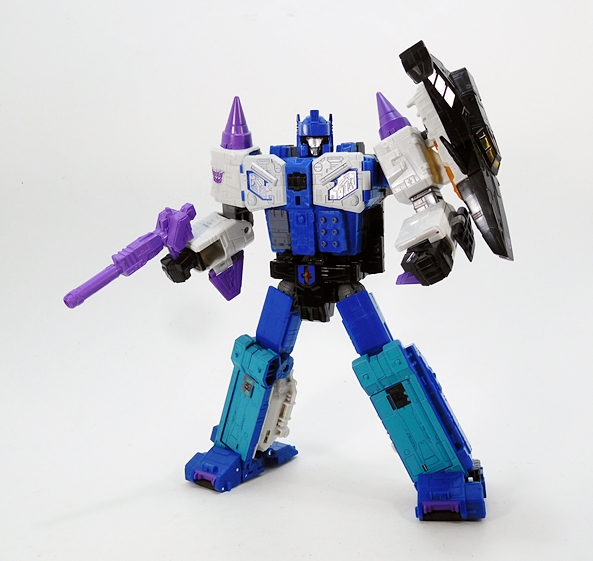 Certainly, having Sky Shadow first meant I wasn’t as anxious to pick up Overlord, but I’m sure glad that I eventually did. This mold is tons of fun to play with, and I was actually surprised at just how many changes Hasbro made to it, at least from the waist up. I’d even go so far as to say this is one of my favorite modern updates to an older figure I’ve seen, and that’s saying a lot because Hasbro has been killing it lately. It’s no secret that Titans Return has been one of my favorite modern Transformers lines of all time and Overlord is a perfect example of why. And since this is likely to be the last Titans Return review I ever publish, I’m glad to be going out on such a high point and with such a fantastic figure!