It feels like forever since I reviewed a statue here. That’s probably because I’ve been cutting waaaay back on buying these things as my available display space becomes more and more tight. I don’t have a problem with putting action figures away, because I can always take them out and play around with them, but if you can’t display a statue, then what’s the point of buying it, eh? And since there’s a nice sense of balance to beginning and ending the week with Marvel content… let’s check out Diamond Select’s new Marvel Gallery release of X-23 as Wolverine.

I’ve been an avid fan of both the Marvel and DC Gallery lines, even way back when they were part of the Femme Fatale’s line. These are roughly 9-inch scale PVC budget pieces, which seldom disappoint. As always, the statue comes in a collector friendly window box, with windows on the front, top, and side panels to let in plenty of light. The figure itself comes suspended between two plastic trays and displays fairly well in the box. 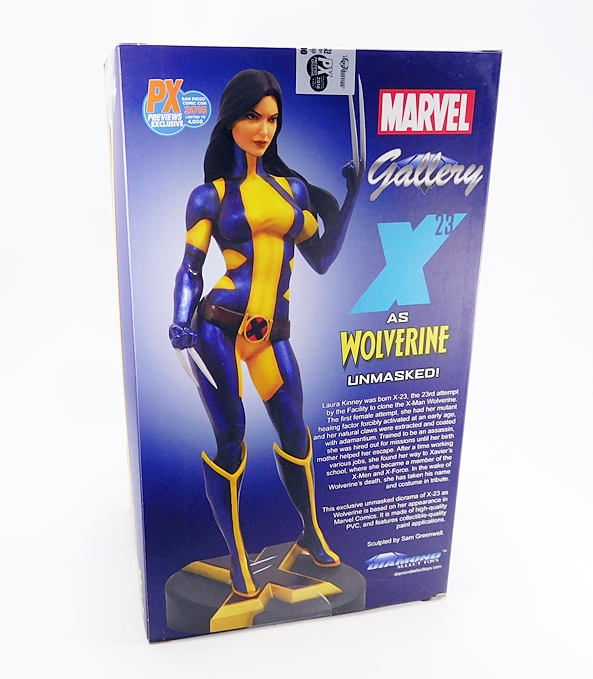 Diamond produced two versions of this statue, the regular retail features Ms. Kinney wearing her mask, whereas this unmaksed PX Previews Exclusive was available at San Diego Comic Con and afterwards at select retailers. The box itself denotes that it is an exclusive along with the addition of the “Unmasked” call-out at the bottom. There’s also a piece of silver tape over the top flap stating this release is limited to 4,000. Not exactly a strict limitation, but I presume it’s at least less than the production quantity of the masked retail version. There’s no assembly required here, so let’s get her out and see how she turned out! And just to put cards on the table, I’m not a fan of this book, but I sure do love the way X-23 looks in the Wolverine costume! 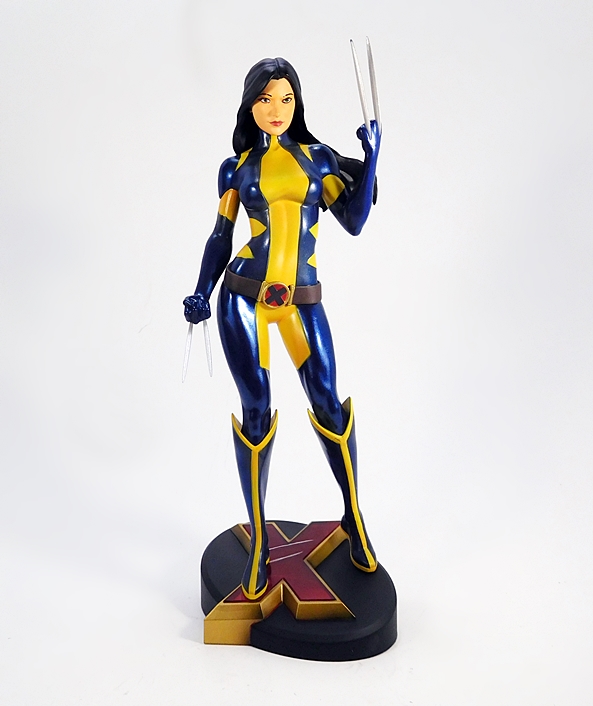 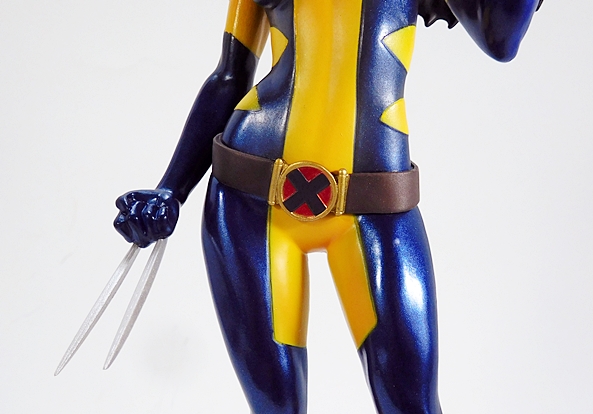 Diamond has been all over the place with the poses for this series lately. Sometimes you get something exciting and dynamic, other times you get something more reserved. X-23 here certainly leans toward that later with what I would consider to be very museum-style composition. Ms. Kinney stands with her right hip thrust to the side, her right arm down by her side, her left arm held up at the elbow, and both hands balled into fists and popping her her claws. The skin-tight suit shows her shapely form from all angles beautifully, and every bit of detail in the suit is incorporated into the sculpt. That last bit is a big deal for me, as with the fairly low price point of this line, I would have expected them to squeak by with just paint lines to make up the bulk of the costume. Other details include the belt, complete with signature “X” belt buckle, and the flared tops to her boots.

Budget statues tend to succeed or fail based on the quality of the paint applications, and I’m happy to say that the paint work on this piece is overwhelmingly good. The yellow is bright and vibrant, and the blue is deep with a beautiful high-gloss metallic finish. The belt is painted matte brown with a gold frame for the belt buckle and a black “X” on a red field. The paint lines for the costume itself are all pretty sharp. There are just a few very minor areas where slight improvements could be made. Indeed, the biggest flaw on my statue’s costume is a little blue showing through on the yellow trim at the top of her left boot, and even that isn’t so bad.

The portrait here is solid, but maybe a bit unremarkable. Ms. Kinney is certainly pretty and she’s sporting a serene expression with just a hint of a smirk, like she’s about to dive into some action. I think the expression works OK with the very reserved nature of the figure’s pose, but I tend to expect a little more emotion out of X-23. The hair also looks pretty tame from the front, although it does fan out at the back, which is about as much energy as the composition here is putting out. The paint on the facial features is overall solid, but there’s an area on her top lip that could have been sharper.

I really dig the base they designed for her. It’s basically a sloping black oval with a raised “X.” The “X” features a gold border around translucent red plastic, which would look particularly nice when displayed on a light up platform. There are also a couple of scratches etched across the “X.” Oddly enough, Diamond continues to call these “PVC Dioramas” on the boxes, and while every now and then they do something that could be called a diorama base, most of the ones I’ve picked up lately are more stylized stands like this one. There’s nothing diorama-like about it, but I suspect the label is a way to get around licensing and what Diamond is allowed and not allowed to do. I can’t think of any other reason for it. 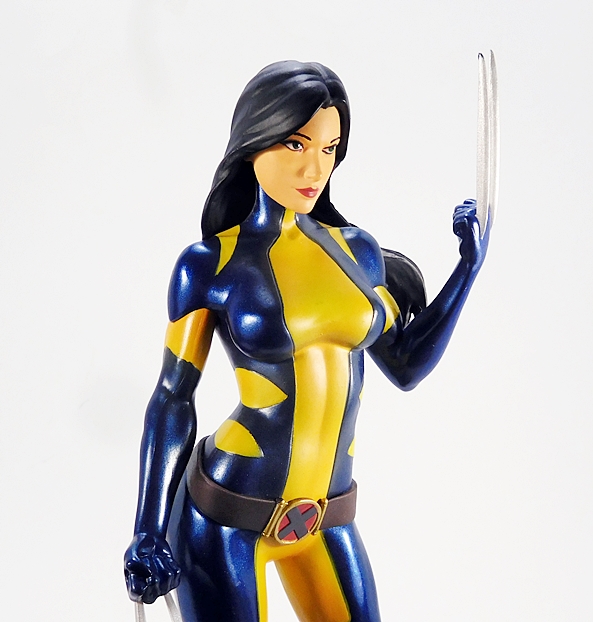 In the end, I really like how this piece turned out. Granted, it’s not the most exciting of poses, but then it wasn’t meant to be, so I think a lot of the appeal here will come down to personal taste in that regard. I do like some energy in my statues, but at the same time I find that more classic poses like this one are easier to display with other releases. They take up less space and usually look great together. I debated hard over whether to go for the masked or unmasked when I set about to pre-ordering and I ultimately went with the unmasked Exclusive, because I figured the regular release would be more readily available later on down the road should I decide to get both. Besides, at $45 the Exclusive was only five bucks more. Either way, it’s pretty cool to be able to get a statue like this for under $50, especially when they turn out this good.