Hey, who wants to check out a new release from Phicen/TBLeague? Bah, I know the answer is almost none of you. I don’t tend to hang on my blog’s stats very often, but I do know that these Phicen reviews drum up the least amount of interest and engagement as almost anything. Hell, I once reviewed a box of Twinkies, and that post performed better than most of these Phicen reviews combined. But that’s OK. I’m a huge fan of these figures, these reviews are a labor of love, and I’m not about to stop anytime soon. Those of you still reading are probably aware that Phicen and TBLeague have done some great work bringing indie comic properties to the collectible figure market. In addition to some of their own original designs, they’ve produced figures from Image, Chaos, and Zenescope to name a few. And every once and a while they release a figure of a character from a comic I’ve never heard of, but I like the figure so much I go ahead and buy it anyway. Today is one of those times. 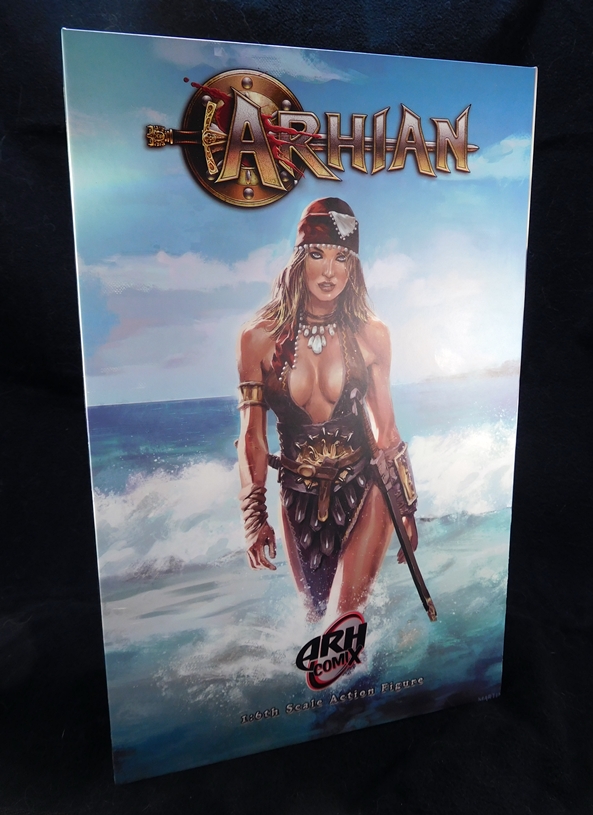 A little research tells me that Arhian: Head Huntress is a swords-and-sandals type offering from ARH Comix, with an emphasis on bloody battles and T&A. A little while ago, Phicen put out a figure of Arhian in her standard warrior garb and as tempted as I was to grab her up, I couldn’t fit her into the budget and, like most Phicen figures, when the retailers sold out, she shot up in price on the second-hand market. Needless to say, when they solicited this pirate version of Arhian, I plunked down my pre-order post-haste.

The packaging is very typical for TBLeague’s boxed figure sets. You get a heavy duty box with a front flap that secures with magnets to the sides. There’s some nice artwork on the front and photos of the figure on the side and rear panels. The figure itself comes nestled in a foam tray. I say it pretty much every time I review one of these releases: These guys do a much better job on the presentation than Hot Toys and Sideshow does on many of their regular releases. 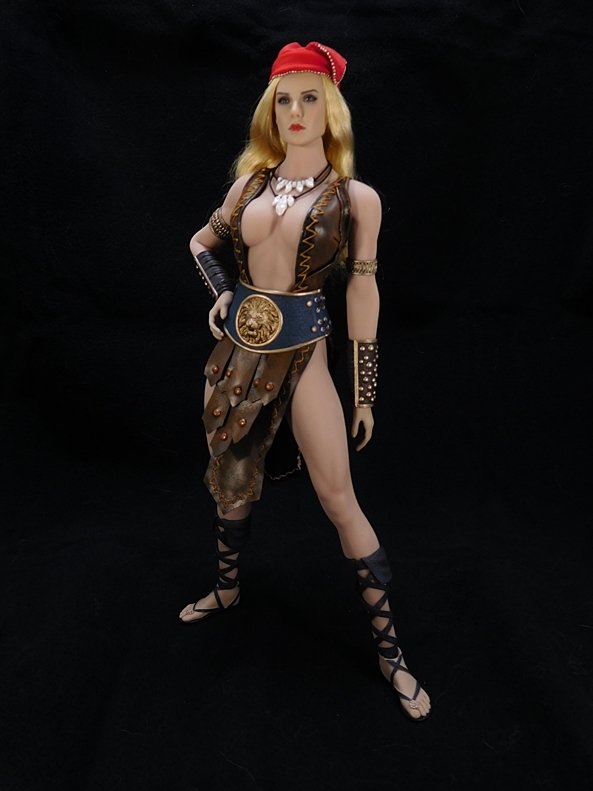 Aw, yeah! Check her out! Is there anything sexier than a hot blonde pirate or am I alone in this particular fetish? Either way, one look at Arhian and I didn’t need any backstory or familiarity with the comic to want to add her to the collection. Arhian uses what I think is one of Phicen’s medium build seamless bodies, making her shorter than the last one I looked at, Athena, and with a slightly larger bust size. As always, the body features silicone skin and muscle wrapped around a stainless steel skeleton that mimics the articulation of the human body so well that it’s almost creepy. They still don’t have the look of the elbow bends quite right, but that’s a small nitpick when everything else looks so good. 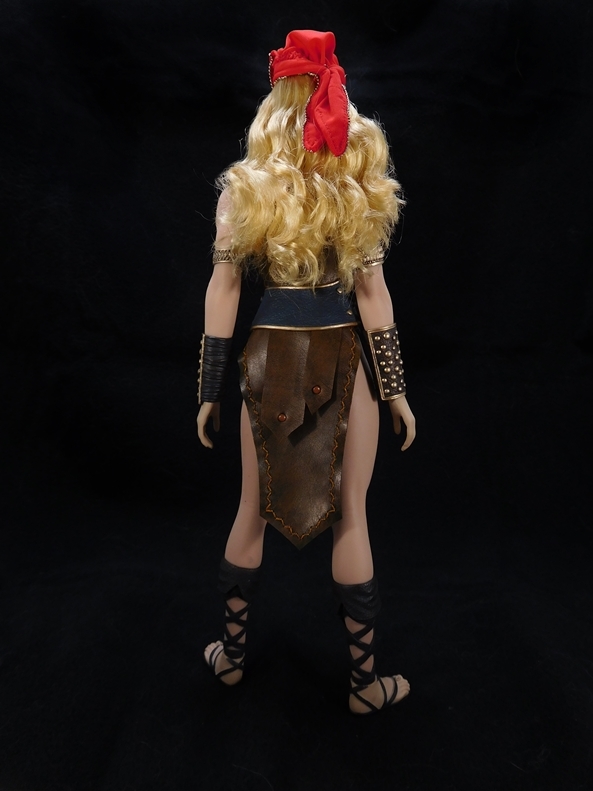 In terms of complexity, I’d say Arhian’s costume is about middle of the road when compared to some of the other Phicens in my collection, but that’s not to say I didn’t run into a few roadblocks getting her kitted out. She comes wearing a one-piece leather-like tunic, which is split down the middle to offer a fine view of her pirate’s chest, and extends down past her waist in the front and back to offer a little modestly to her stern and aft quarters. The garment is neatly stitched and features a zig-zag pattern running down the front edges. Oh yeah, it also smells like Lipton Iced Tea mix. I’m not joking. Open up a tub of that stuff and take a big whiff. that’s exactly what this figure smells like out of the box. Don’t ask me why.

The easy parts of completing her costume includes sliding on her bicep rings, her wrist bracers, and the tops of her sandals. The bicep rings are cast in plastic and have a nice bronze finish to them, along with some great sculpted ornamentation. These are fairly easy to get on, and even easier if you have a little talcum powder lying around to help them slide onto her silicone skin. The same goes for her long bracers, which feature sculpted wraps and bronze studs. Not only do these look stylish, but they also help to hide the seams on her wrists. As for the sandals, the feet are sculpted with the lower part of the sandals permanently attached, as well as an ornamental bronze colored fixture between her toes. The rest of the sandal is a soft plastic sleeve that slides onto her leg. I love how they did this and it makes for a decent effect, although the bottom of these pieces don’t always hide the ankle seams in more extreme action poses.

The biggest pain to set up was her wide belt, which had to be laced up the side with string and tied off. It took me quite a while to be able to thread the string through those tiny eyelets. I eventually had to resort to treating the string with some hair gel to get it through. I laced it up off the figure and then when I tried to slide it up her legs I found that it was almost too snug to make it to her waist. I think it was sheer determination not to have to go through the lacing ordeal again that finally got it into place. Besides being a pain, the belt looks great. It has a leather-like texture and an ornate lion head sculpted into the front. It also features the studded leather straps that make up her skirt. 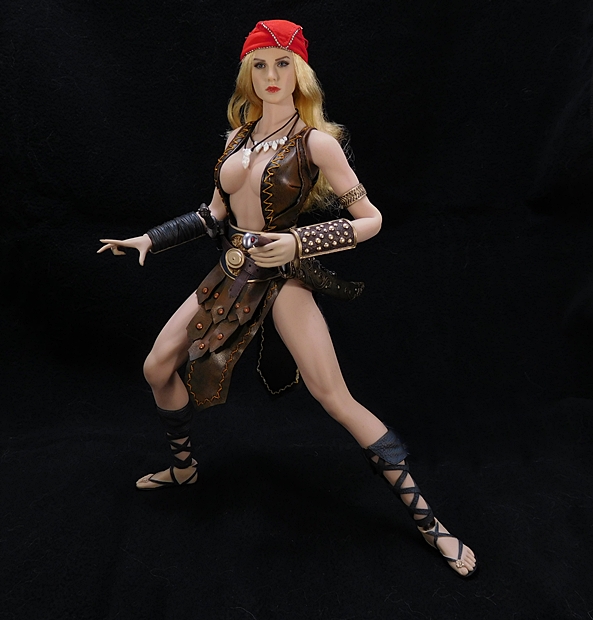 Arhian also comes with a sword belt that can be fastened loose to rest on her hip and carry her dagger and sword. The dagger simply hooks onto the belt, whereas the sword is secured by passing the belt through a chain. I was not a big fan of the chain on the Athena figure’s sword and I’m not a big fan of it here either. It does hold it in place for display, but it has to be adjusted to hang properly whenever I repose the figure.

Moving on to the portrait, I think Phicen is continuing to show solid improvement in their figures’ heads, both in terms of sculpt and paint. The eyes are quite lifelike and the paint on the eyebrows, lashes, and lips is crisp and precise. Arhian features long rooted hair, which is fairly manageable right out of the box, but I did apply a bit of that hair gel to get it further under control. She comes with a red cloth hat, which is similar to the dew-rags, or bandanna if you prefer, often seen worn by pop culture pirates. The hat features some beading around the bottom edge as well as around the flap on the front. The final piece of Arhian’s costume is her necklace, which looks like it’s supposed to be made up of bones or teeth. They’re all individual pieces on a string and getting it looped right and tied off was a bit of a challenge for me. 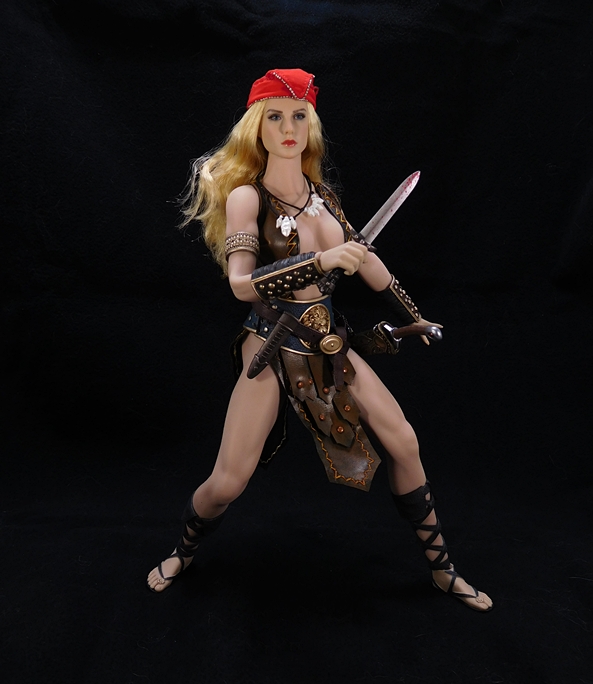 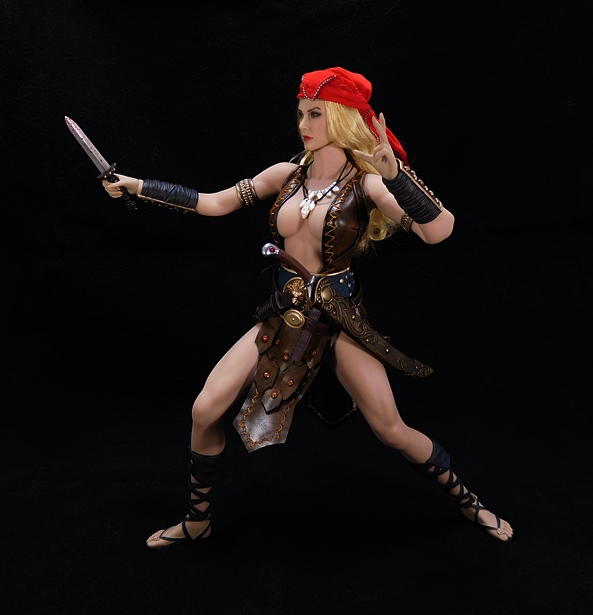 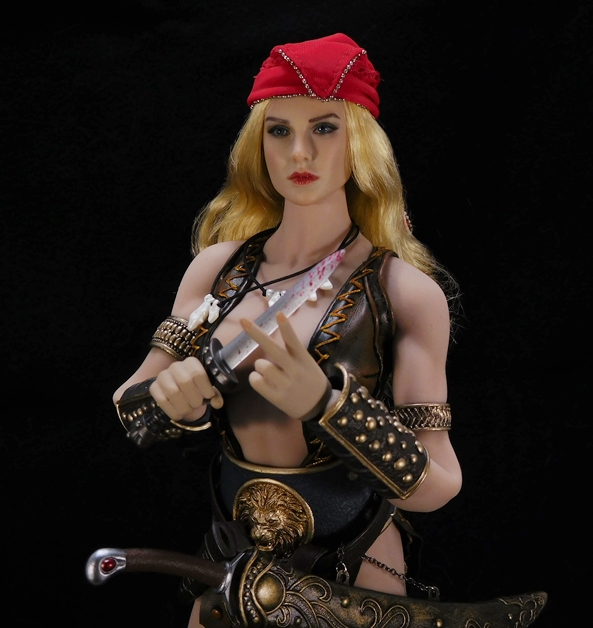 Moving on to her weapons, the dagger is a simple enough piece with a functional, and not terribly flashy looking, sheath. It features a sculpted grip with a pommel that looks like it could be useful in smashing in skulls. The blade is painted silver and has some blood splatter on it. In addition to her relaxed hands and a pair of gesturing hands, Arhian comes with a pair of weapon holding hands that work perfectly. 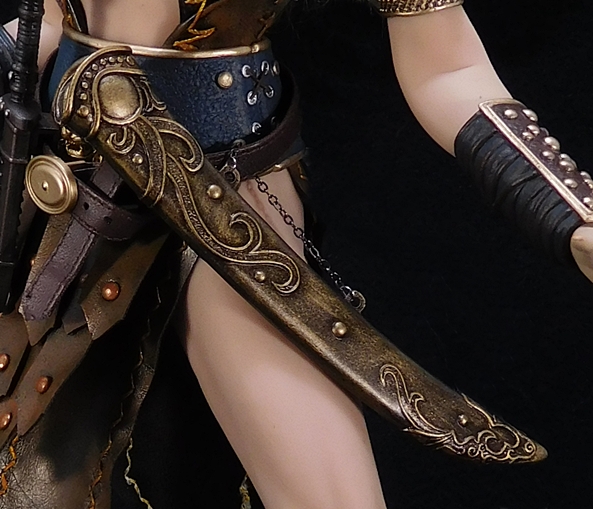 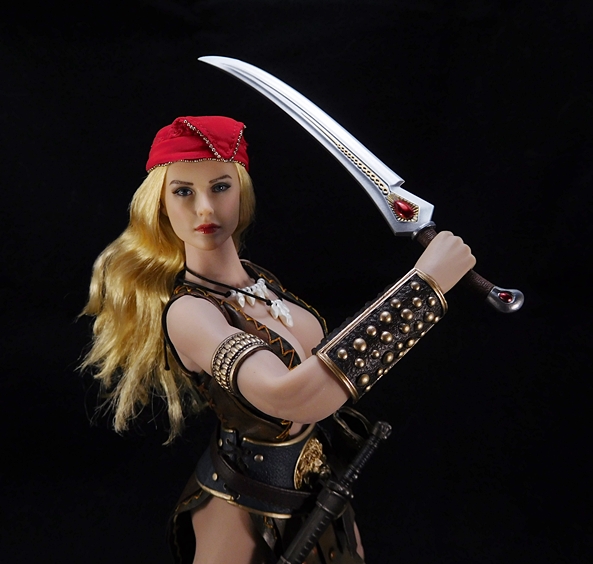 The sword is a far more interesting piece than the dagger and features a rather ornate scabbard with reinforced scroll-work and some big sculpted studs. It’s cast in plastic but has an aged bronze finish to it and the sword fits perfectly, so that it’s easy to draw out but still stays put. I’ve already said my piece about the chain that it hangs on. I think it looks great, but it’s not as secure as it could be.

The sword itself features a curved blade, which looks like it’s designed for quick slashing attacks to make up for its’ lack of reach. The plastic blade features a brilliant silver paint along with a gold sculpted inlay and a red ruby. The hilt has a sculpted simulated wrap on the grip and a silver pommel with another ruby centered in it. I really dig all the accessories included with this figure, but I wish they had thrown in a few more goodies, like a bottle of booze or a treasure chest. I’ve already started hunting down some goodies for her. 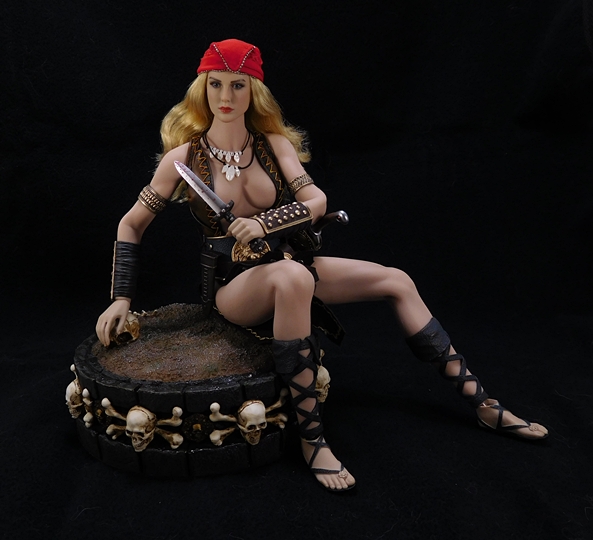 She does, however, come with a really nice display base. It’s a patch of sand surrounded by a stone wall and adorned with skulls and crossbones. There’s an additional skull half buried in the sand as well. The sculpting and design of this base is outstanding, but the problem is that there’s no way to secure the figure to it. Sometimes Phicen makes use of foot pegs, but that’s not the case here, and there’s no post or anything to hold her up. I have no troubles getting her to stand on it, but there’s no way I’m going to display her that way over a long period of time and risk having her take a shelf dive.

Every time I open a new figure from TBLeague I’m delighted with what I find, which is probably why I keep plunking down the pre-orders. About the only real gripe I have for Arhian here is the price. At $179, she ranks in the same as Athena and that figure game with a few more outfit pieces and a column display stand that’s as big as the figure. Granted, Athena was an original design and Arhian is a licensed character, but I can’t believe a small press like ARH Comix soaked these guys with the licensing fees. What I’m getting it as Arhian feels like she should have been at least $10 cheaper and while that was never going to be a deal-breaker for me, it’s worth mentioning nonetheless.