It’s Monday again and that means it’s time for another random Marvel Legends review here at FFZ. This week my sticky fingers caught hold of another figure from the Cull Obsidian Wave, and it’s Thor from Infinity War! I’ve already checked out Ant-Man, Wasp, and Black Widow from this wave, so I’m finally more than halfway done. But with opening only one of these a week, it feels like Avengers 4 will be out before I even finish with the Infinity War figures. 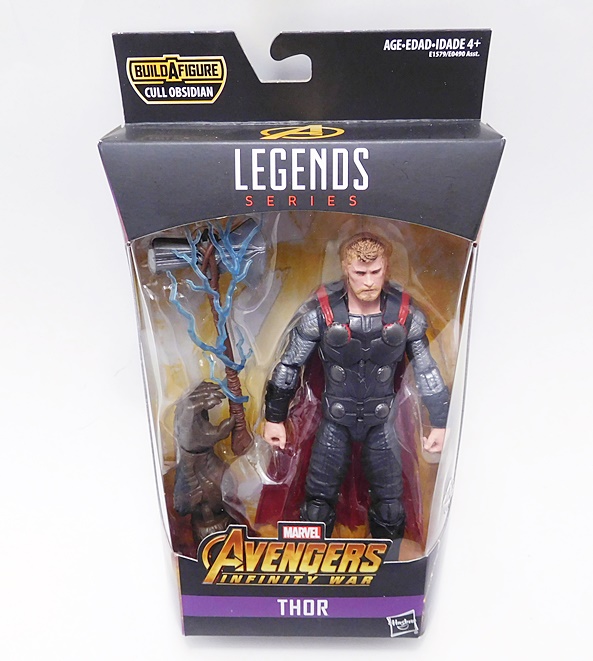 And here’s the beautiful Pirate-Angel himself in the package, and between the figure, accessory, and BAF part, this tray is pretty damn full. This is actually the second version of Thor that Hasbro has released from Infinity War. The other is part of a three-pack with Rocket and Groot, and don’t worry I’ll get around to opening that one eventually. 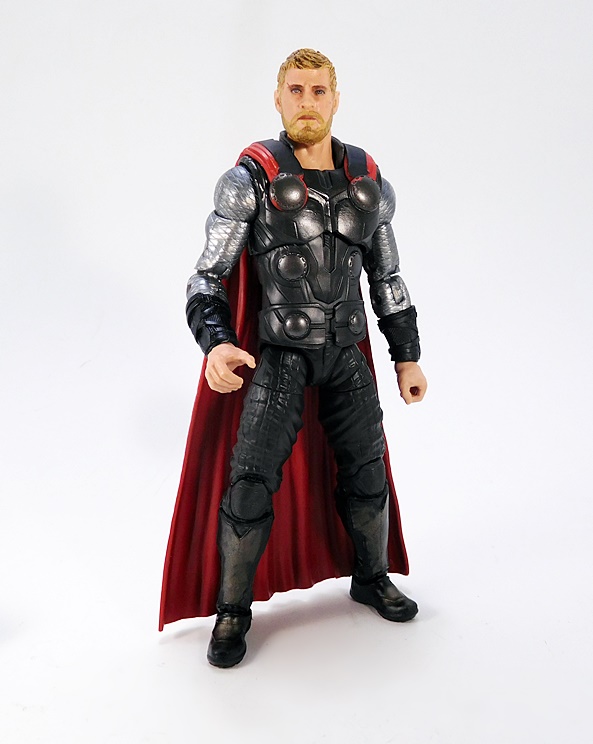 Thor’s look has changed a bit throughout the films, and for me, I don’t think anything has surpassed his look in the original Avengers. That suit is so colorful and regal and it’s the one version of the character I display on my Hot Toys shelf. But I get the reason for costume changes. It not only sells new toys, but from a tonal standpoint, bright and colorful Thor would not have looked right in a film like Infinity War. 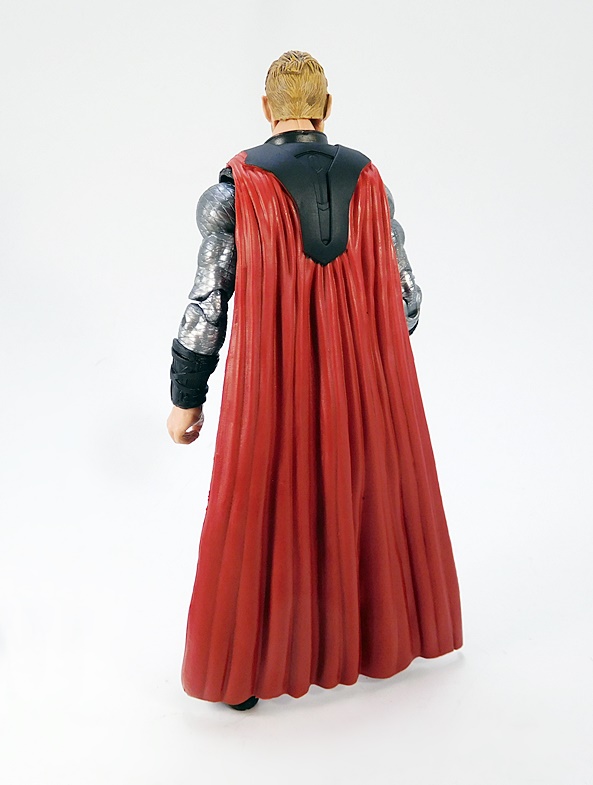 With all that having been said, this suit is fine, it’s just a little drab and boring to me. The chest armor is black, the trousers are black, the boots are black, the wrist bracers are black. The only real color being expressed here is the metallic silver used for his armored sleeves and the bit of red trim around the shoulders of the cape and the discs where they attach. And of course the cape itself. What’s a little frustrating here is that even though there’s so little paint on the figure, they still managed to get sloppy with the red around the trim of the discs where the cape attaches. There is, however, a nice little metallic sheen around the armor and the boots have a bit of a dark coppery wash to them. 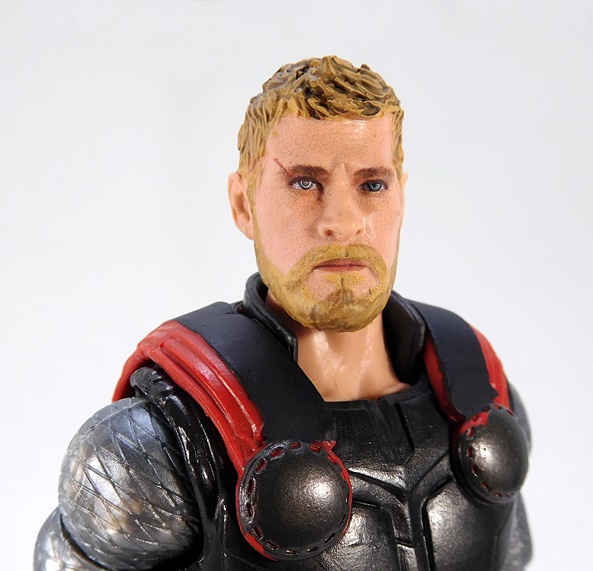 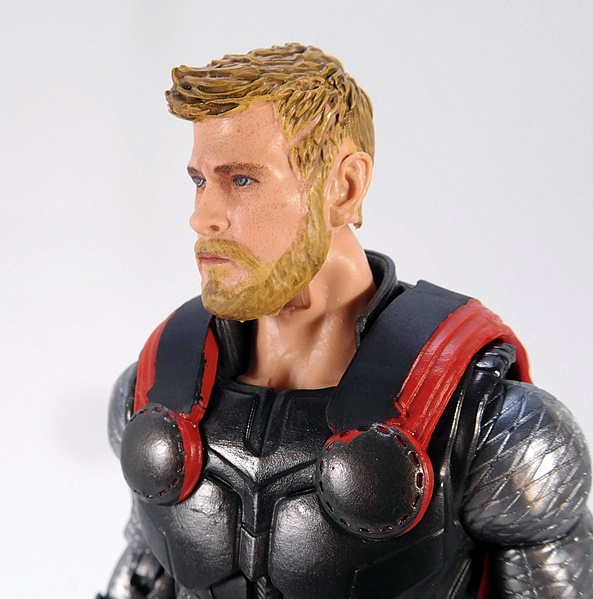 The head sculpt here is excellent in terms of detail and realism, and I think it hits the mark pretty close on likeness. Here, Thor looks a tad older and more haggard, but it’s close enough for me. Indeed, I think it’s impressive how much Hasbro’s Hemsworth sculpt has improved in the short time since the Ragnarok figures were on the pegs. The painted skin tone is so much better than the waxy bare plastic we’ve seen in the past, the hair sculpt is extremely well done, and you even get a little bit of scar showing over the right eye. And yes, this is Thor after Rocket gave him a replacement eye. 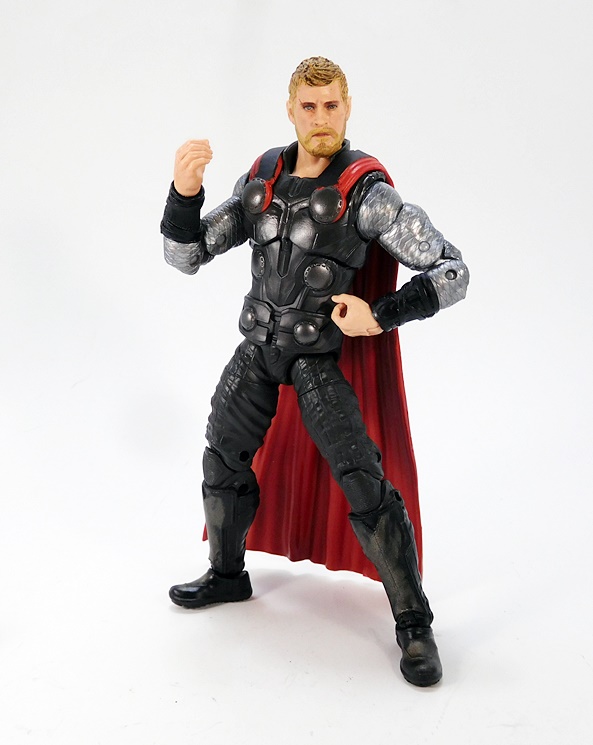 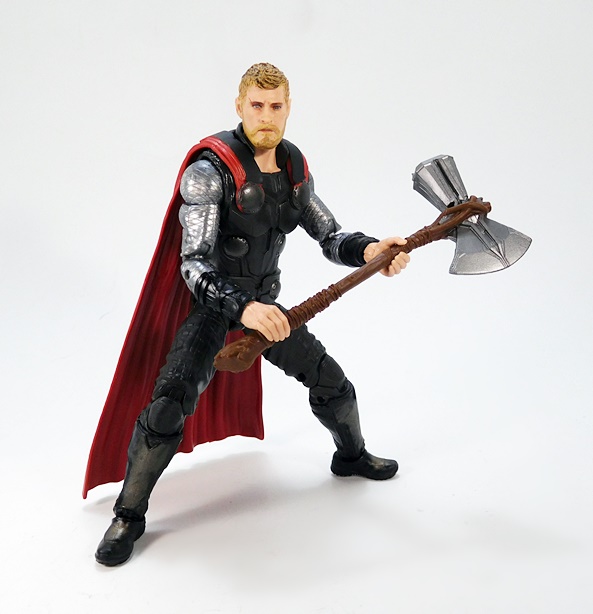 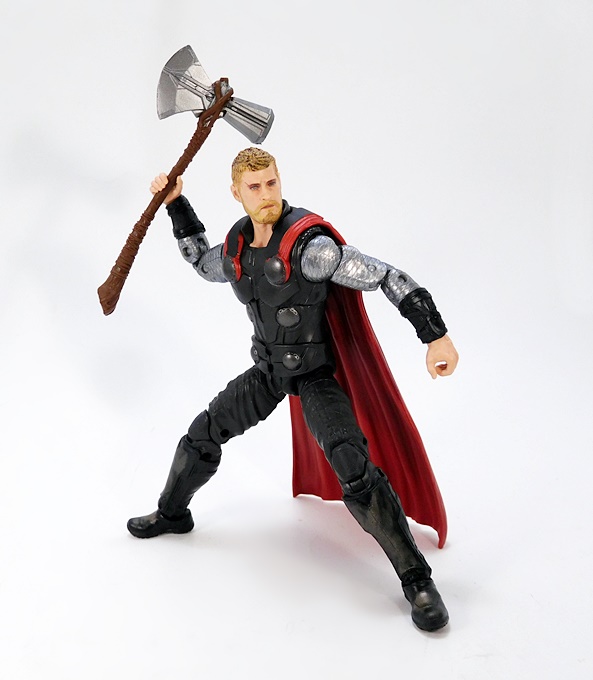 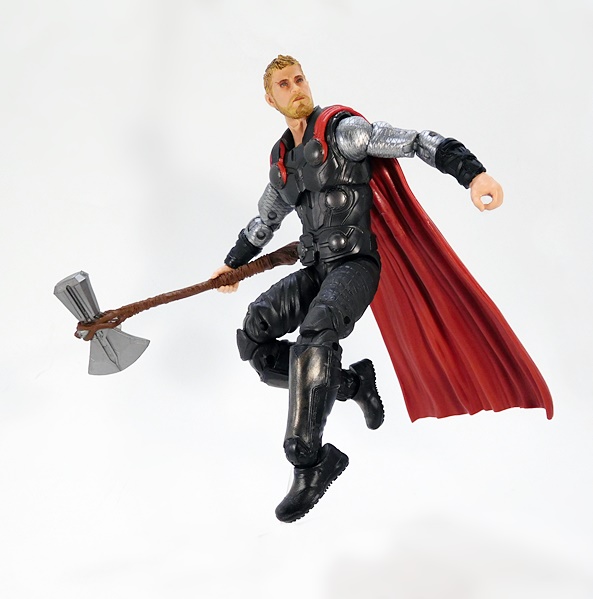 Thor comes with his brand new weapon, Stormbreaker and it is a beautiful accessory. The blade is cast in a satin-metallic silver and I really dig the way the handle (Groot’s severed arm) weaves itself around the head. I think this is one of the best looking accessories I’ve seen out of Legends in a long while. 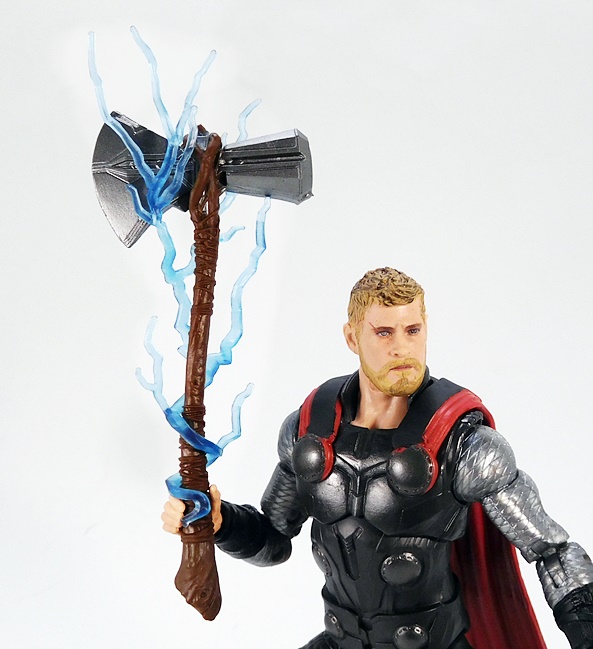 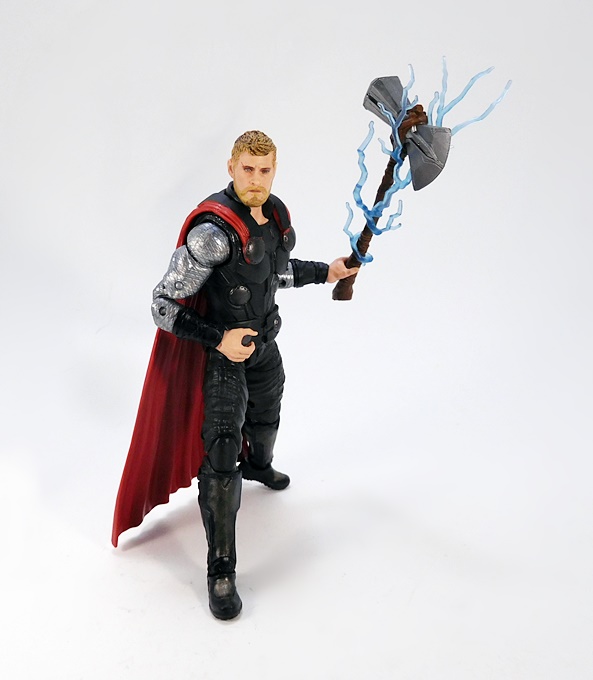 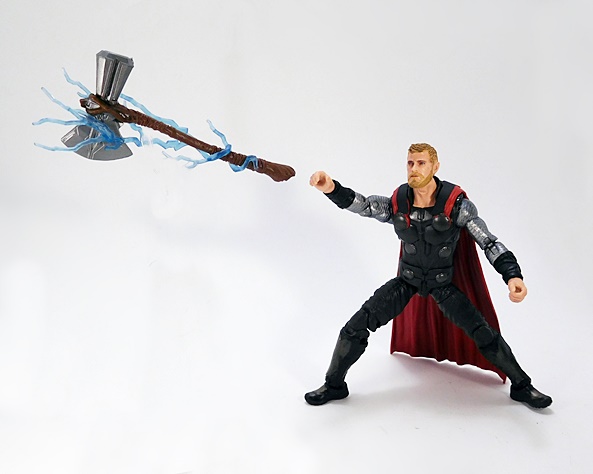 Stormbreaker also comes with a lightning effect part, cast in soft blue translucent plastic and molded so that it can be snaked around the weapon. Some of you may know that I’m seldom impressed with the effect parts that Hasbro occasionally bundles with these figures, so it’s probably no surprise that this one will be going into the dreaded and bottomless Tote of Forgotten Accessories™. Hey, it’s fine and I’m never going to argue about getting something extra with a figure, but I just don’t have a lot of use for these things. 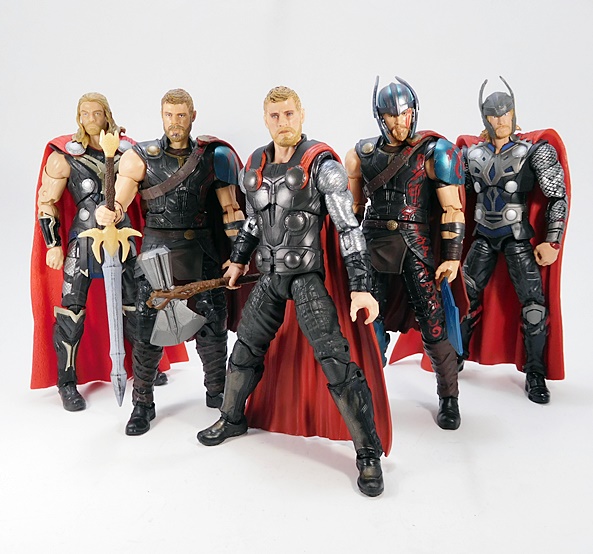 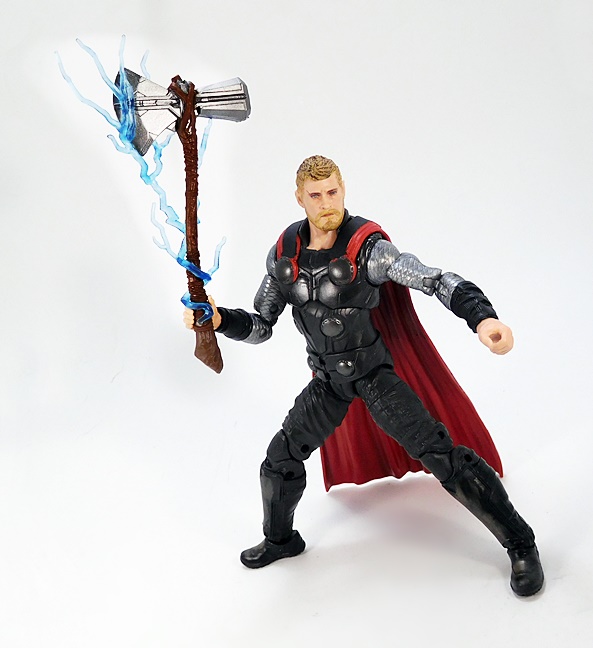 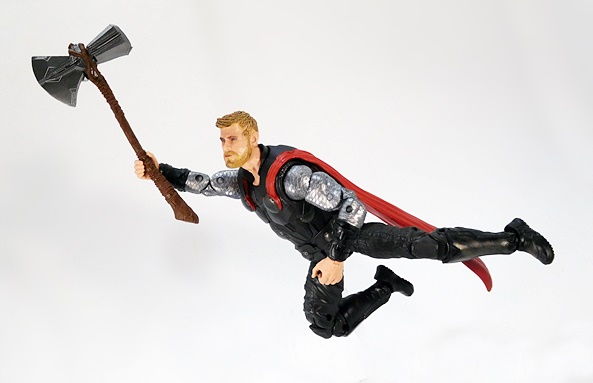 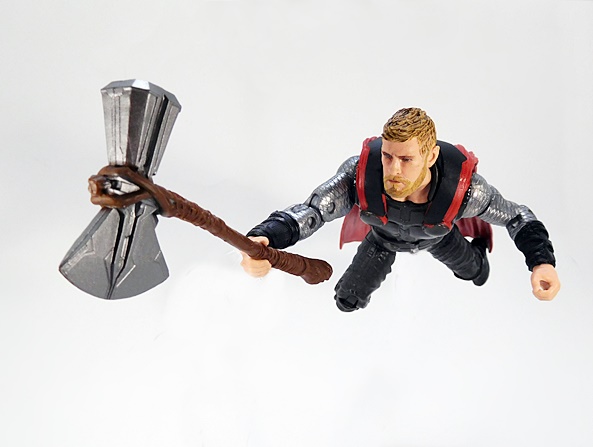 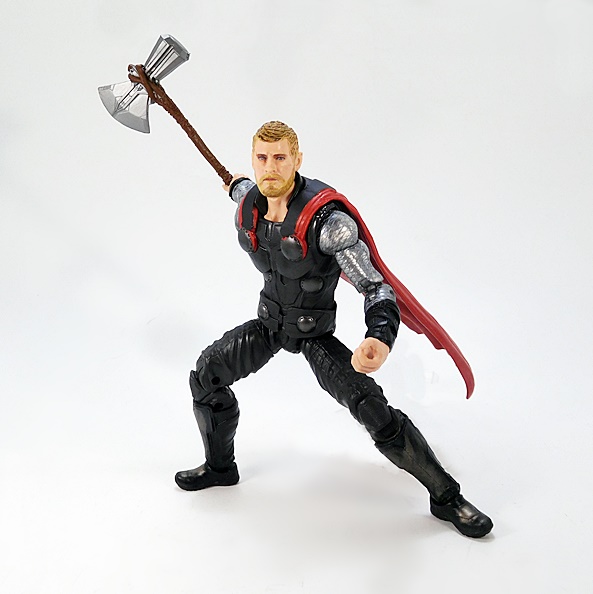 I like this figure a lot, but I’m mainly coming away really wishing that Hasbro would take another crack at The Avengers Thor. They’ve upped their game so much since the days of that Walmart Exclusive wave, I’d like to see my favorite version of The Mightiest Avenger get a re-do. Then again, I’m not sure I want to open the can of worms where I’m re-buying all these characters again. I mean, I’m already so hopefully behind on buying and opening this line of figures, that maybe we should just leave things well enough alone. Suffice it to say this is a solid enough figure and he’ll look great alongside the rest of the Infinity War crew when I finally get them all together and set up.